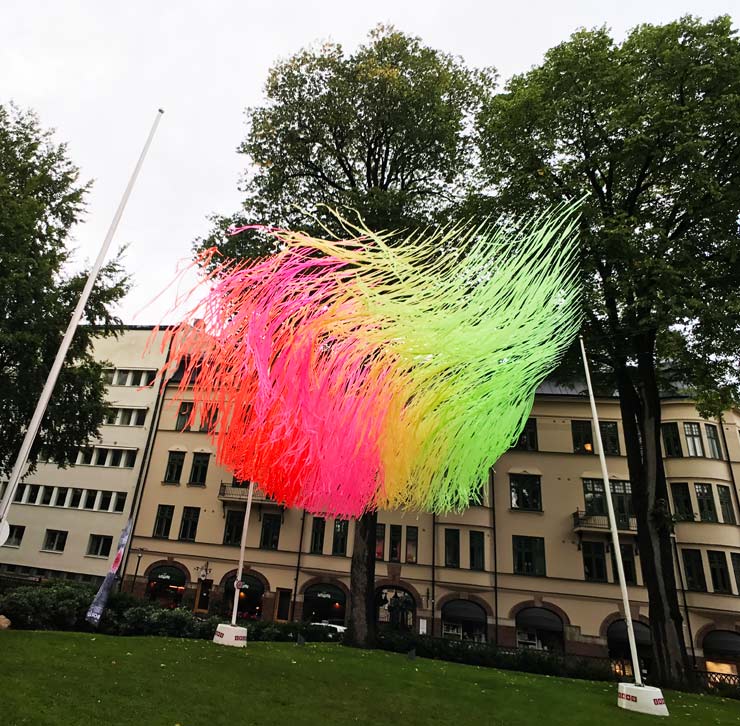 A fluorescent underwater sea creature is flobbing it’s tentacles in the ripply and unusual directions of the currents and cross currents, full of life and full of crazy ideas. This particular one is hanging over your head actually, but the breezes make it look like its under water. 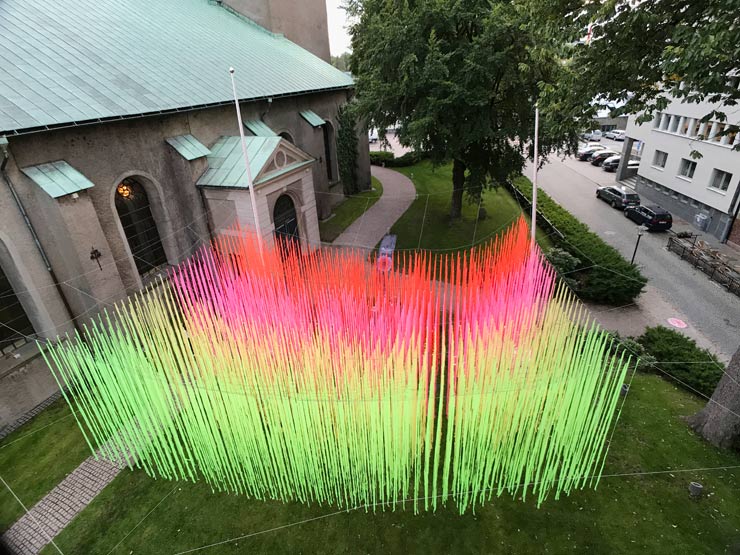 The levitating and waving installation in the sky must be confusing for Borås citizens who see the sugar hot pink, the blood red, the radioactive lemon and electric lime blob in the sky, especially because its in the church yard.

It doesn’t really seem like a piece of Street Art to those who are accustomed to thinking that festivals like “No Limit” are for murals only. But the director of this Swedish art gathering doesn’t worry much about restrictions like that – he knows that public art today has as many variations as it does practitioners. 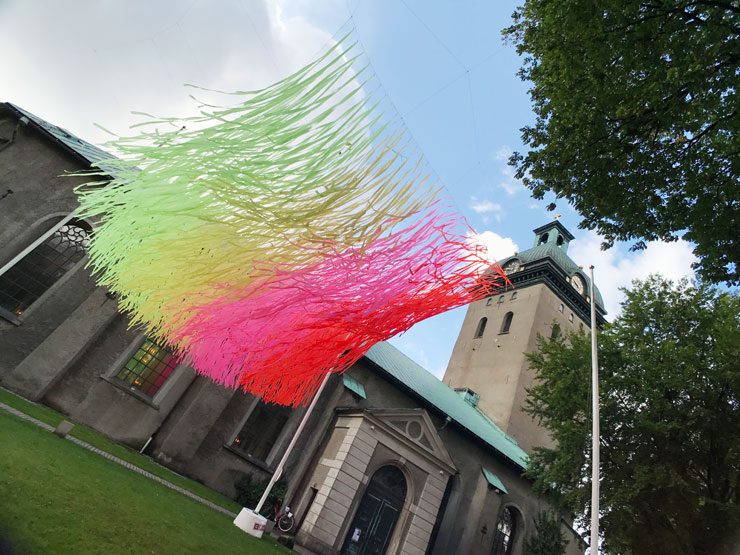 “I can stare at the HOTTEA installation forever,” says Shai Dahan, a Street Artist who has invited a healthy range of artists who work in the public sphere in the 3 editions of “No Limit”.

In fact, it is mesmerizing and time may collapse upon itself while you stare up at this ever-changing sky-sculpture from green grass of the yard, or from the pews inside Caroli Church while allowing your attention to drift out the window. It may appear as a vision, a sign, a holy spirit embodied in this cubic form just outside the glass. Hopefully the Vicar hasn’t found it too distracting for parishioners to listen to his Sunday sermon. 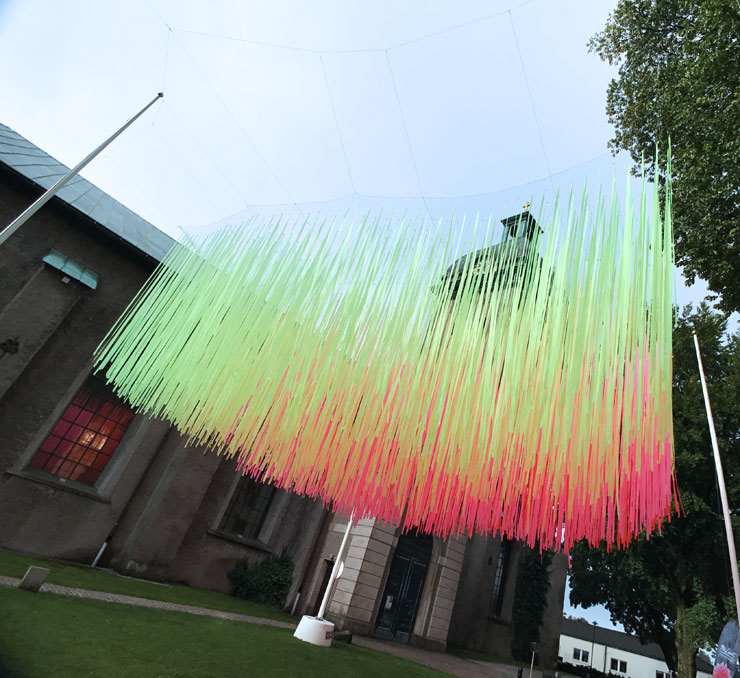 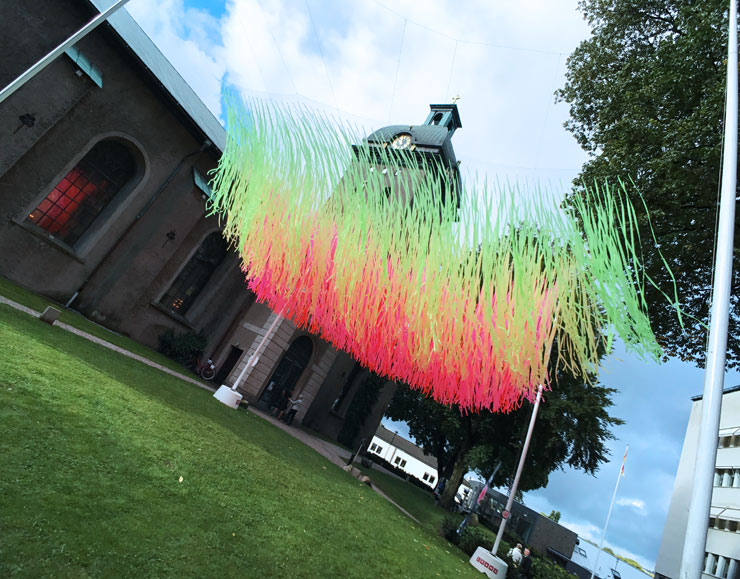 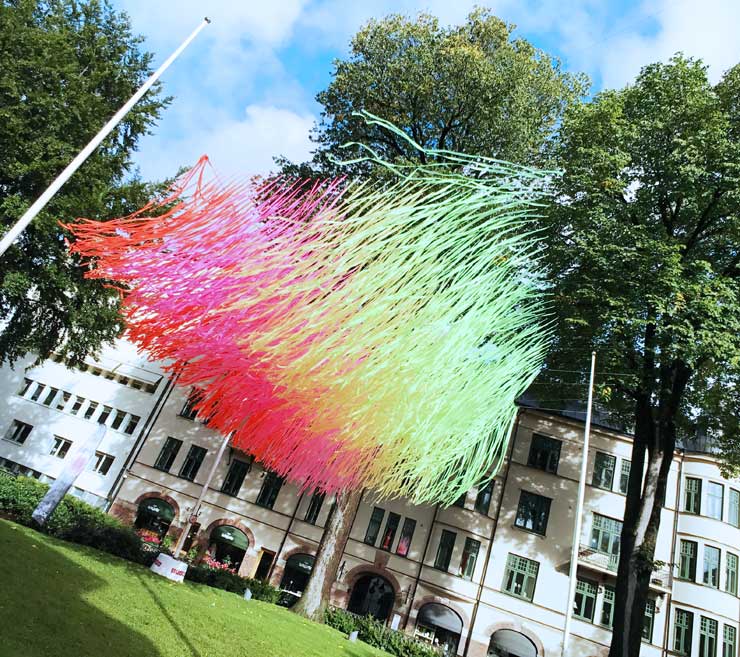 Images Of The Week: 03.16.14
Here's our weekly interview with the street, this week featuring Amanda Marie, bunny M, City Kitty, Dan Witz, Foxx Face, Invader, JerkFace, Mattia Lullini, Pixel Pancho, PJC, Retna, Sean 9 Lugo,...
BSA Images Of The Week: 09.06.15 NUART 2015 SPECIAL
After Stavanger Mayor Christine Sagen Helgø made the official declaration of the opening of the Nuart gallery show at Tou Scene last night the sliding barn door on the ex beer factory moved back t...
Nuart X Aberdeen x BSA: Dispatch 1
This white and grey skurry appears rather plump as he waddles across the stone road in Aberdeen toward the cherry picker that holds Jasmine from Herakut aloft as she paints the new piece on the concav...
Bayonne Diary, From Alban Morlot's Point of View
Here in Basque country you can casually drive between Bilbao (Spain) and Bayonne (France) as if you were just heading out to the shopping mall to buy new kicks. The signs of course are in multiple la...
MRKA Gives High Marks to "Utility Writers" in Unique Street Tome
When academics and post-modern esoteric poets plunge into descriptions of graffiti sometimes they proffer colorful didactics and clever terminology like “mark-making” and “gestural” to describe the t...
Borås Brooklyn Street Art Hot Tea Jaime Rojo No Limit Borås 2017 Steven P. Harrington Sweden