BSA is in Berlin this month to present a new show of 12 important Brooklyn Street Artists at the Urban Nation haus as part of Project M/7. PERSONS OF INTEREST brings to our sister city a diverse collection of artists who use many mediums and styles in the street art scene of Brooklyn. By way of tribute to the special relationship that artist communities in both cities have shared for decades, each artist has chosen to create a portrait of a Germany-based cultural influencer from the past or present, highlighting someone who has played a role in inspiring the artist in a meaningful way.
Today we talk to GAIA and ask him why he chose his person of interest, Fereshta Ludin.

It has been nearly 12 years since Afghanistan-born German Muslim school teacher Fereshta Ludin won the right to wear her headscarf in the public school system and the topic remains very hot around the country. For one thing, eight German states forbid the practice and as the website DW reported “the verdict’s results continue to spur controversy and leave some asking what is more oppressive: wearing a headscarf or excluding those who do?” . If this teacher and Afghanistan advisor/minister had tried to get a job as a sales clerk at Abercrombie and Fitch in the United States, Ms. Ludin might have been part of a headscarf case before the US Supreme Court this spring.

Street Artist Gaia typically studies the society and culture in which he paints murals and depicts figures who reflect the history and forces of change and stasis that characterize that neighborhood, town, or city. A leader in what we’ve been calling the New Muralism, Gaia has produced these amalgams of symbols, history, and persons – these glocalized paintings – around the world in cities from Seoul to Perth to Honolulu to Baltimore to Miami and Johannesburg, among others in the the last five years.

Since his earliest days as a Street Artist in Williamsburg and Bushwick, Brooklyn, Gaia has engaged the personal, social and political with his artistic ability; first as linotype prints, later as full-blown aerosol murals. So it is no surprise that he chooses as his subject for this show a figure who has held a pivotal role in the evolution of a necessary conversation in classrooms, boardrooms, courts – and the court of public opinion. It is here in the public sphere that Gaia has always drawn inspiration and energy and returned it back with an impetus to spark examination, discussion and debate.

“The proposal for ‘Persons of Interest’ features a portrait of Fereshta Ludin superimposed over a sky and images of peace,” Gaia says.  “I chose to focus on Fereshta Ludin because of her advocation for multicultural understanding and cooperation in the face of intense national debate regarding the sphere of religious expression in German politics.” 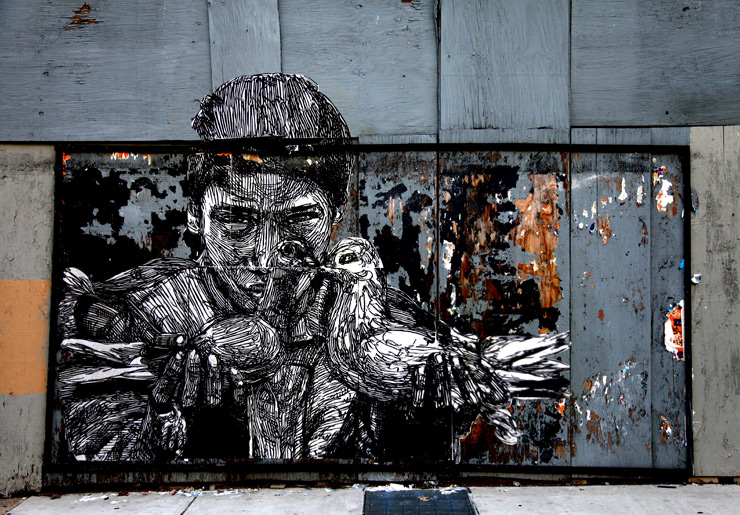 A Gaia lino print piece based on a photograph by Martha Cooper in Baltimore, 2011 (photo © Jaime Rojo) 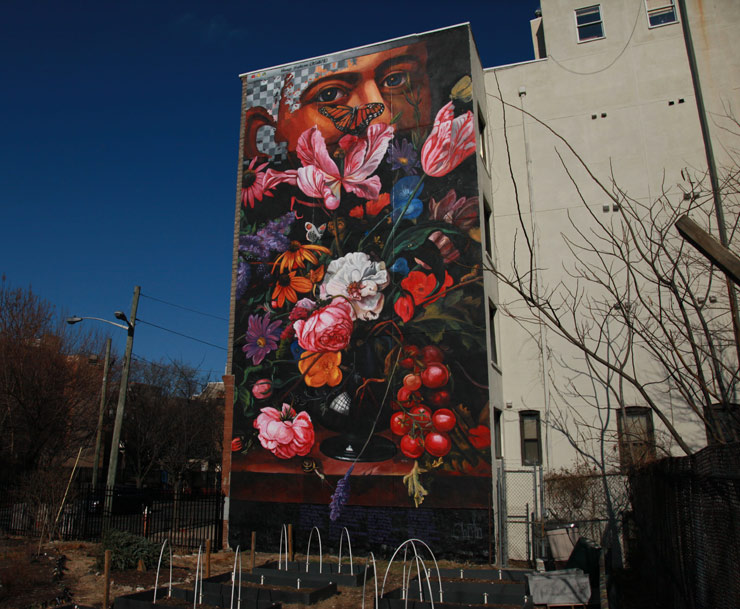 Photos of 2020: #7 : "Come Here"
Street artist Sara Lynne Leo got big this year on New York Streets - or at least her tiny genderless figures did. Hoisted high on these boarded-over businesses in Soho these human sized figures illust...
Well-Rounded Compositions from Augustine Kofie: “Rotationships” Opens in SF
ROTATIONSHIPS A warmly modern and well-rounded direction today from graffiti writer and contemporary artist Augustine Kofie as his sampling mentality pauses over the O, a symbol of lasting inspira...
Extending the Family at Fazunchar Festival in Portugal with Isaac Cordal
Idealized figures, they are not. It’s a curious pleasure to meet some of the extended members of the Isaac Cordal businessmen after all these years, isn’t it? For a decade or so you’ve been seeing...
Images of the Week 08.30.09
ur Weekly Interview with the Street Summer Geometric Abstraction (photo Jaime Rojo) C215 with an OverUnder flyby (photo Jaime Rojo) Who holds the key to this Tainted Lovebox...
New Faile on the Street / Dispatch From Isolation # 72
Part of the ongoing drama that your life becomes as someone who knows street art is you never feel like you are alone on the street. The appearance of a tag or an artwork reminds of you people and it...
Afghanistan Berlin Brooklyn Brooklyn Street Art BrooklynStreetArt.com Fereshta Ludin Gaia Germany Jaime Rojo Mural Persons of Interest Project M/7 Steven P. Harrington UN Urban Nation Urban Nation Museum