Is there anything lower than a slumlord? Slumlords: Those building owners who basically abandon their properties to fall into disrepair, endangering individuals and threatening communities with physical and economic harm? Okay, maybe some reality TV stars are lower than slumlords, but that’s a different sort of poverty. 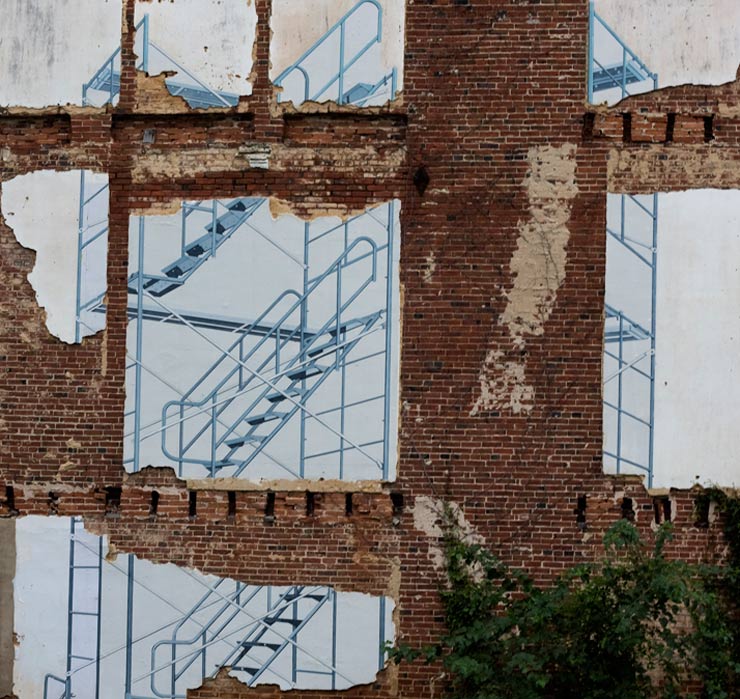 Historically Street Artists have been drawn like bears to honey when it comes to decayed buildings and abandoned places. Aside from it not feeling patently illegal, painting or wheatpasting the decay also feels like a contextual installation full of meaning, even when it is not. So it appeared a natural alliance when local Baltimore Street Artist Nether decided to join forces with the local organization named Slumlord Watch and create Wallhunters in his city last year. In an ironic twist, Street Artists are currently being credited for improving a community – at least until they are bashed for encouraging gentrification, but that won’t be till next year probably.

Born from the corporate free-trade economic abandonment of American workers that took off during the Reagan administration and which continues to ravage our cities right now, a huge swath of Baltimore’s housing stock stands empty, whistling in the wind as the blue collar jobs that sustained the city for decades sought shelter in lands with no worker protections, pesky regulations, and near-zero taxes. With no tenants and no income to pay Baltimore property taxes or to keep up homes, many owners simply abandoned them, in turn leaving the city with a bill it was unable to pay. Yes, we’re generalizing, but that’s the part of the cycle that we’re swirling in now. 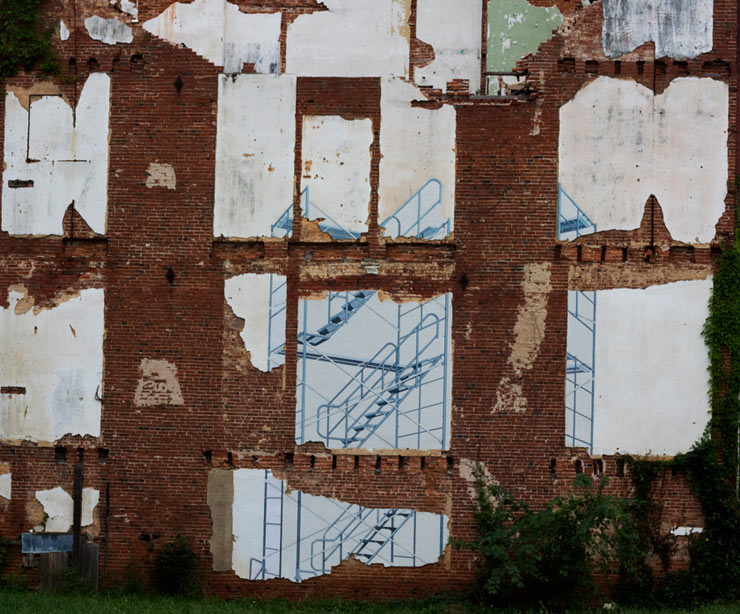 Last month Street Artist Specter joined a growing list of Wallhunters, artists who use their tools to draw attention to the landlords who effectively abandoned neighborhoods and who are creating progressively unsafe conditions and evolving eyesores for an already hurting community. When it doesn’t get the attention of landlords, it does get the attention of the city. In Baltimore, where entire blocks have been boarded up, it is not unusual to find only one or two hapless families still trying to eek out a life while the structures to the left and right are falling, or worse, providing shelter to drug dealers or other unsavory types. For the few who have managed to keep their homes here, this is the reward paid for their perseverance.

“Artists illegally paint on abandoned property owned by notorious slumlords in Baltimore,” explains Specter, who recently did this installation for WallHunters: The Slumlord Project, . What happens next is instructive. Because the art draws attention, the neighbors begin targeting the owner of that specific property. Specter, who calls the abandonment an epidemic, says that some of the former homes are beginning to generate positive action because the neighbors are feeling connected and empowered to change their neighborhood. “It encourages and helps to facilitate local residents to take action,” he says. “Once the painting is finished and residents hear about the new artwork, someone will paste a notice with the name of the owner and all the information necessary to properly report a complaint.” He says the sudden attention often has results. 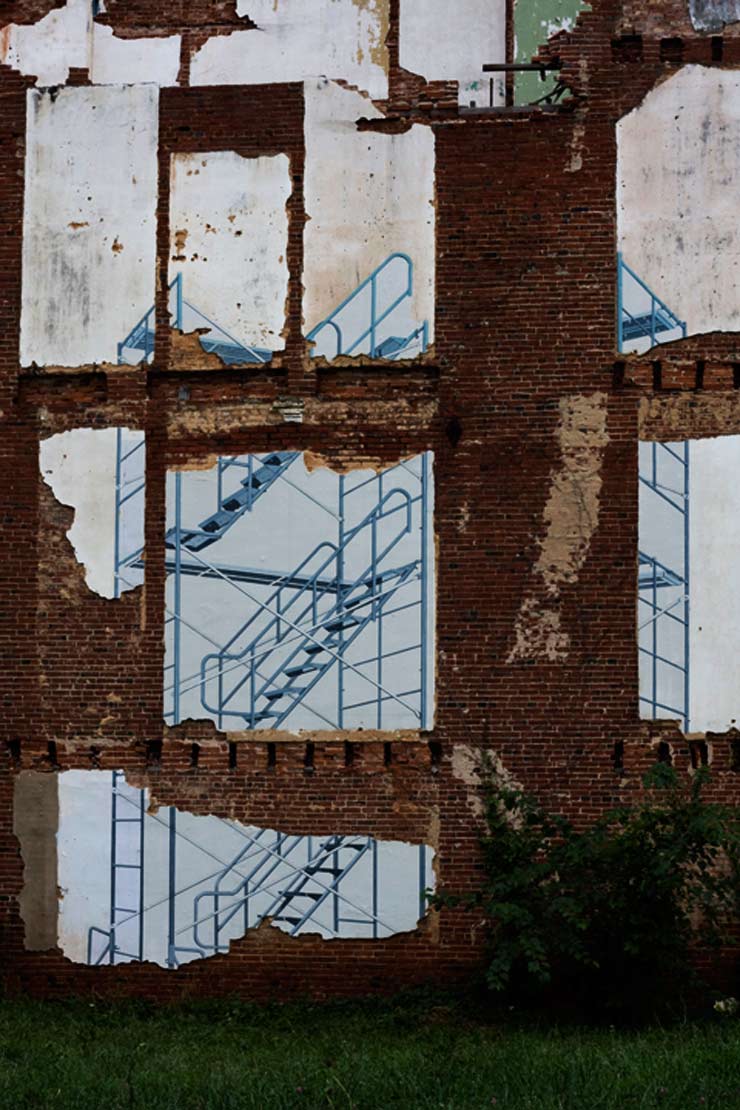 Specter and Seitan in Chicago

We said Satan in the headline just to grab your attention, but really we were referring to that wheat based meat substitute increasingly favored by an increasingly vegetarian population, Seitan. Specter is down with seitan and last week put up his own painting for Uptons Naturals, a company that produces it. BSA is not sponsored by anybody so don’t worry, this is not a clever “integration” into our editorial. But we do think vegetarians are generally very sexy, agreed?

“My piece comments on how eating meat alternatives like Seitan is good for the environment,” explains Specter, who debuts this work on BSA today. But what’s the cloud connection – are people starting to store Seitan via cloud computing? Specter tells us that those are cow farts. More Seitan equals less bovine flatulence. “Seitan can heavily reduce the methane gas that is released into the air by large animal farms,” he explains. Hence the bright clouds. 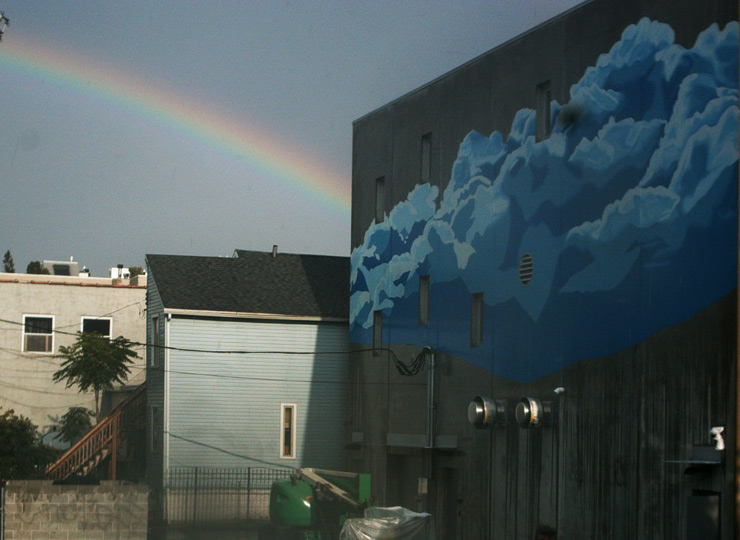 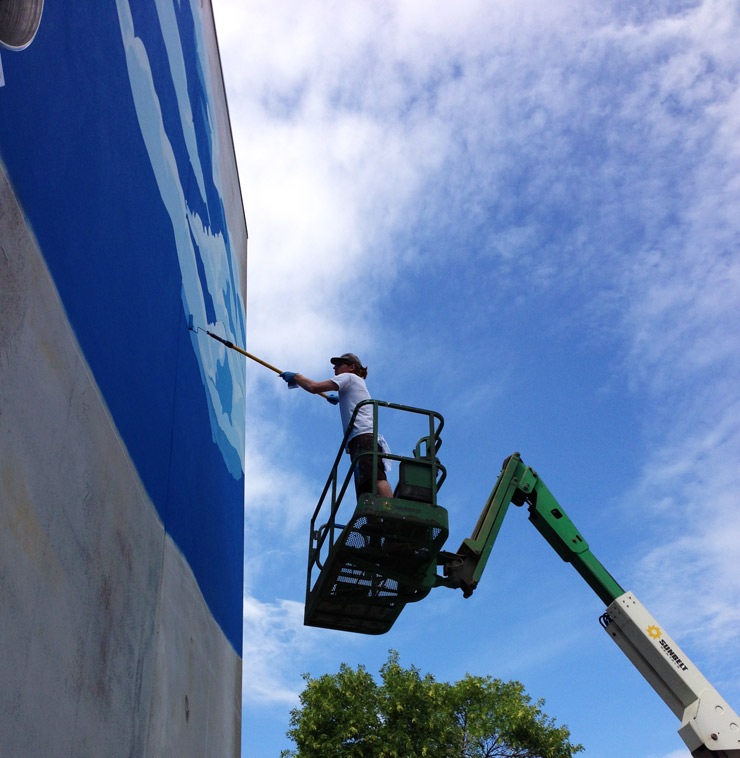 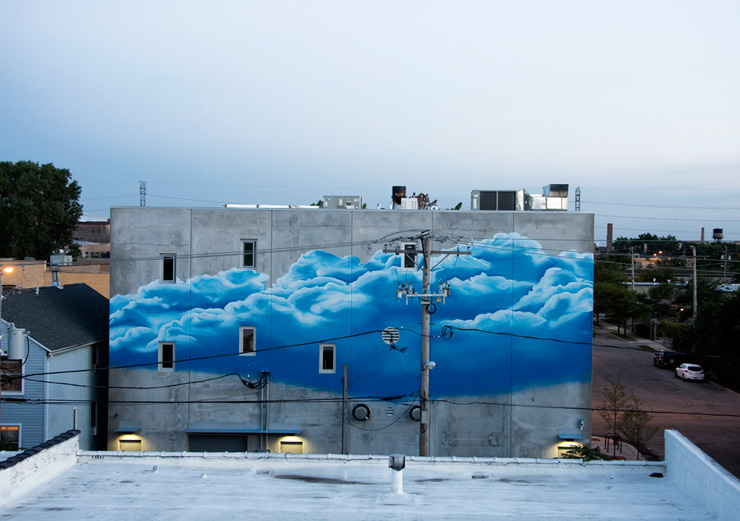 Ludo says "Enjoy the Violence"
Ludo is on the street right now in New York putting up his combinations of pretty and violent work, and he’s happy to be here. Thursday he will be ready to welcome you at his show at Jonathan Levine G...
BSA's Piece on "Submerged Motherlands" Acclaimed for Year
BSA with Swoon at Brooklyn Museum Sited by Huff Post Editors as Proud Moment of 2014 We're very pleased and thankful to be included in this short list chosen by the editors of Huffington Post Arts &a...
INO "Instability" in Kiev
The frank pop symbolism and dark sarcasm of artists like Banksy and the early punk graphics of albums and 'zines has reached into the monumental public murals of today and this new one of a ballerina ...
BSA Images Of The Week: 10.18.15
Groovin' on a Sunday afternoon.... This week was full of great Street Art stories - the main one everyone was talking about was fake TV graffiti by the Egyptian Street Artists who hacked the prop...
BSA Images Of The Week: 09.23.18
Biggie Smalls and Alfred Hitchcock open Autumn Equinox for BSA this week and we can't help but think of that movie "The Birds" by the English film director where nature turns against man. Kiwi S...
Blatimore Brooklyn Street Art Chicago Gabriel Specter Jaime Rojo Slumlord Project Specter Steven P. Harrington