The artists are having breakfast at the Goat Farm, and Georgie is yelping in his cage. The year old beagle wants to get out and jump on everybody’s lap and help clean off their plates with his pink tongue and but for right now Emily is looking at the weather channel on her laptop and transfixed by the forecasted rain that could hit tonight’s block party in Edgewood and Know Hope is debating a second helping of scrambled eggs. Somebody plows through the screened door with fresh copies of the local arts newspaper that features JR on the front and the Living Walls 2013 official map inside, and assorted bearded bros are pawing through their iPhones to answer emails and catch Instagram shots of the walls that have gone up so far here in Atlanta. 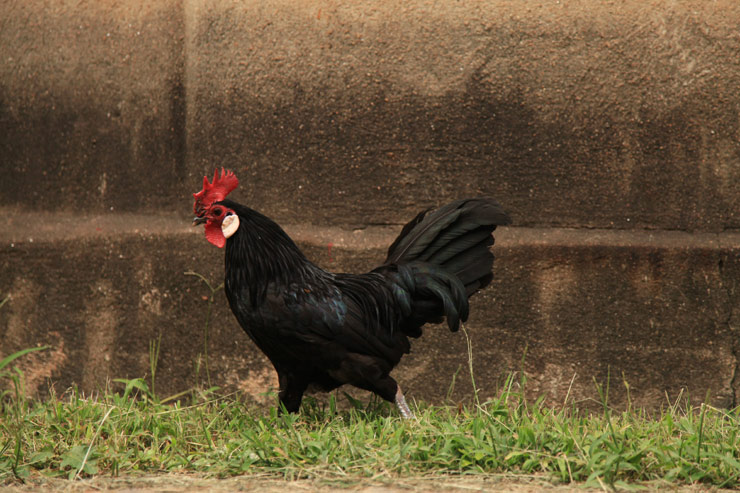 The Goat Farm is the central meeting spot for the 20 or so artists in this, the 4th Living Walls festival, and you are free to wander the grounds of this 19th-century complex of industrial buildings that made cotton machinery and munitions during two of its previous iterations. Now it has a few hundred artists studios, performance spaces, and cool little places to hang out and talk about the new walls by artists like 2501, Inti, Agostino Iacurci, and many others in neighborhoods like Summer Hill and Edgewood. Naturally, you can also hang out with the goats in their penned off area or be entertained by the personality-plus chickens that walk freely around the sprawling grounds. 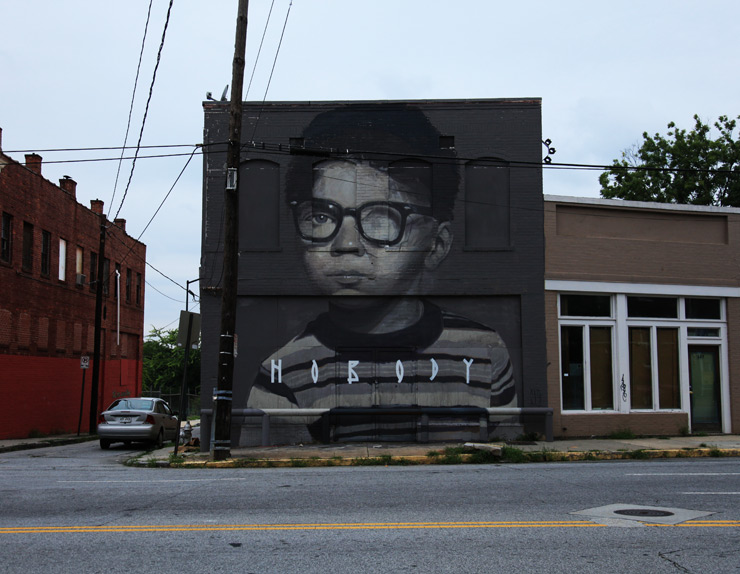 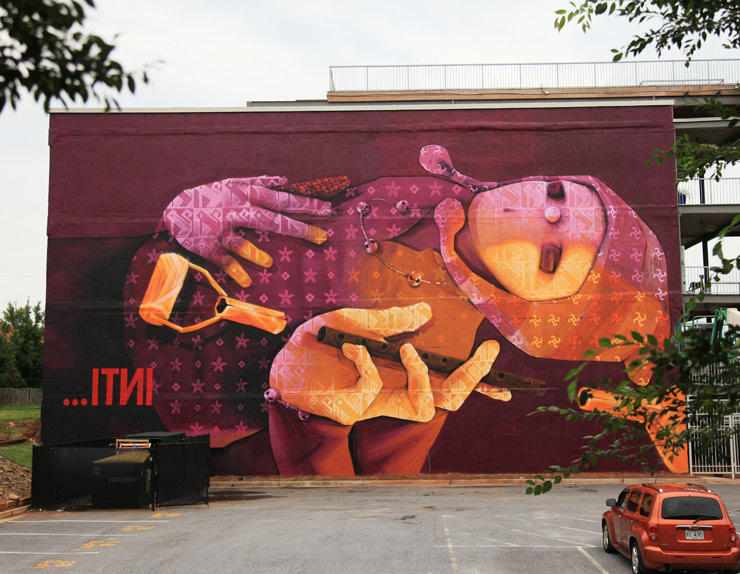 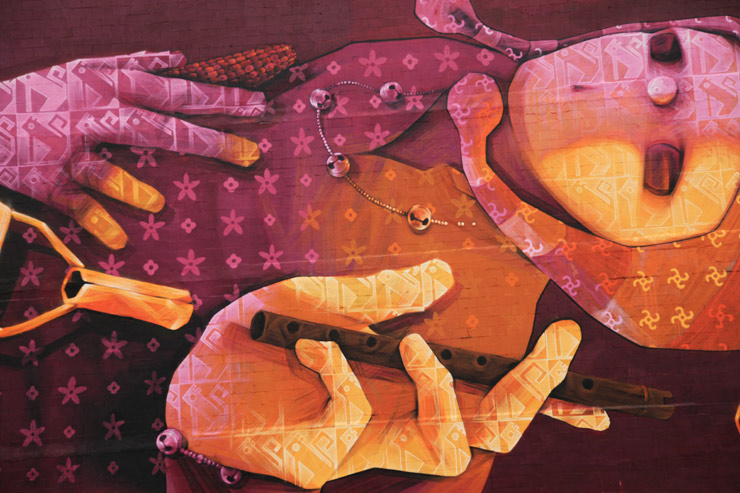 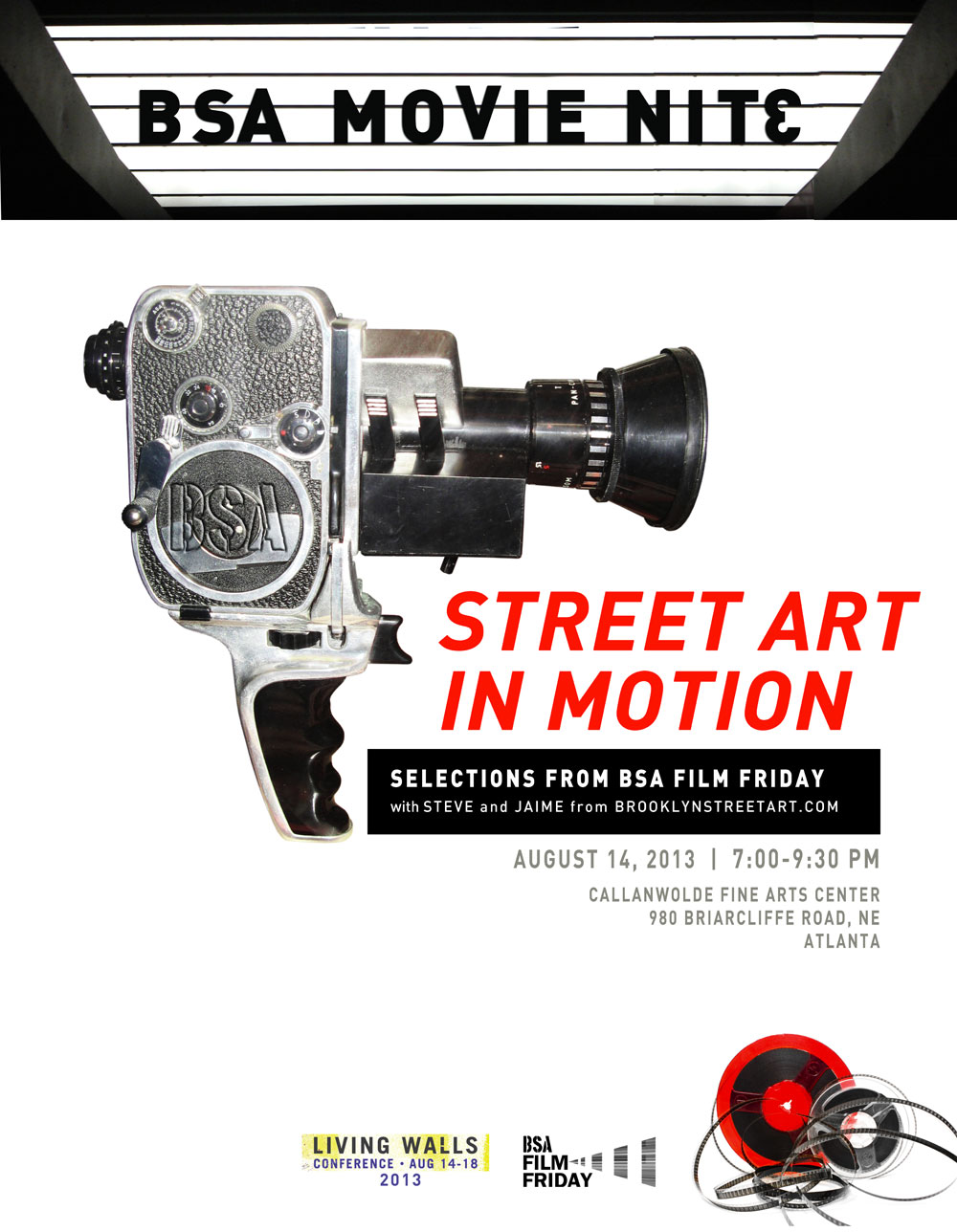 Last night was the kick off Movie Night party at Callenwolde Arts Center and BSA gave the room of 200+ guests an entertaining tour of about 15 Street Art videos from around the world called “Street Art in Motion”. After giving a bit of history about BSA and our involvement with the arts in general and Street Art in particular we introduced three categories that we think represent Street Art in video right now – “Explorers, Experimenters, and Anti-heroes”. Drawn from the archives of BSA Film Friday we looked at works from a group in Tel Aviv, Vhils in Brazil, Vexta in India, Conor Harrington in Norway, Creepy in the Australian outback, MOMO in Jamaica, Various and Gould in Instanbul, and Jay Shells in Brooklyn, among others.

It was great to invite special guest RJ Rushmore from Vandalog introduce a video from Evan Roth and we ended the hour and half presentation with the most popular video of the year so far, “Infinite” featuring Sofles slaying wall after wall in a mammoth abandoned building – a perfect combining of stop action editing and low-tech special effects that pulls together all three of our themes of exploration, experimentation, and a bit of the badass anti-hero stance. By the time the drums and bass stopped pounding on the speakers we were ready for a visit to the bar and some excited talking about music, spraycans, and the city’s longest continually operating strip club, the Clermont Lounge. 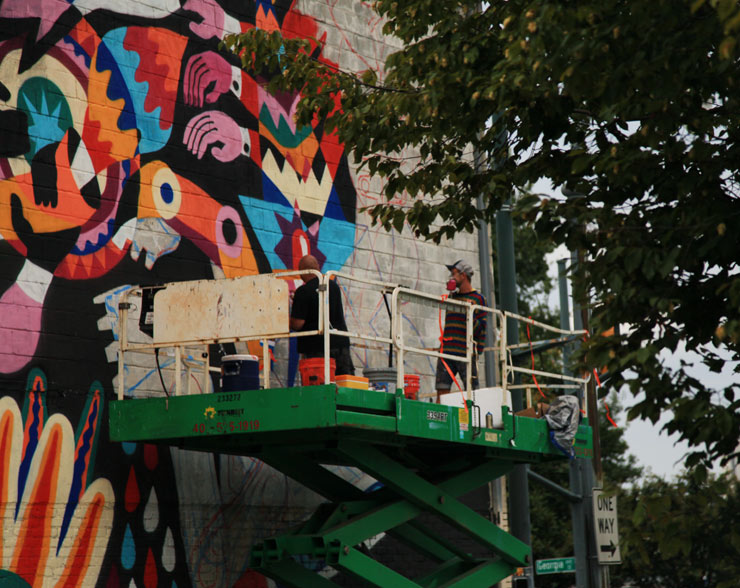 Living Walls 2013 typifies the rolling feast of Street Artists, neighborhood and volunteering that can put together like-minded creators and fans in a harmonious collaborative way. With so many energetic and organized volunteers, its just a good vibe, and the work on the walls reflect a quality and a developed sense of concept that sets up Living Walls Atlanta as a standard of sorts that you may want to study. Even when your car battery goes dead and you need to find a new one to continue touring, its great to see that there is a genuine sense of that thing called southern hospitality here in the city, and we have already met some great neighbors on the street who are happy with the artists and the walls, some even honking and giving the “thumbs up” from their passing cars.

Here’s our first group from Living Walls Atlanta this year. Hope you dig. 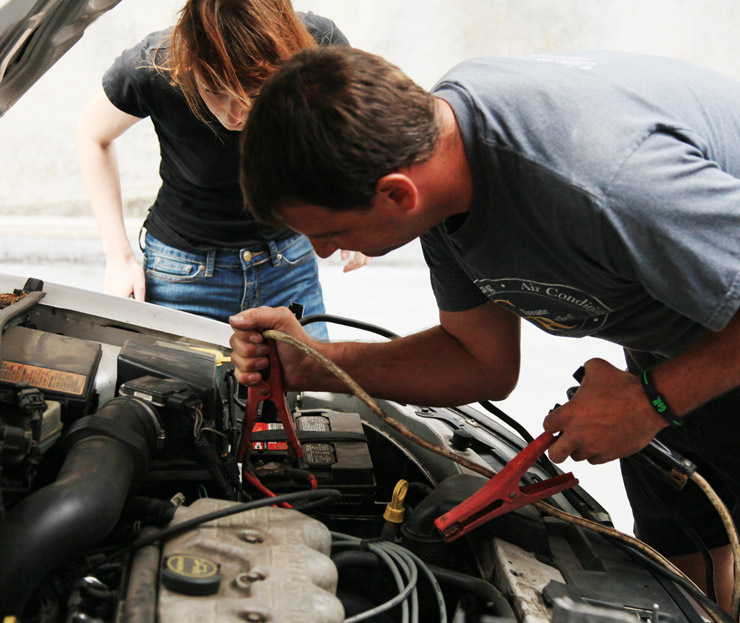 Alex’s car having an emergency boost to send us on our way. Living Walls Atlanta 2013. (photo © Jaime Rojo) 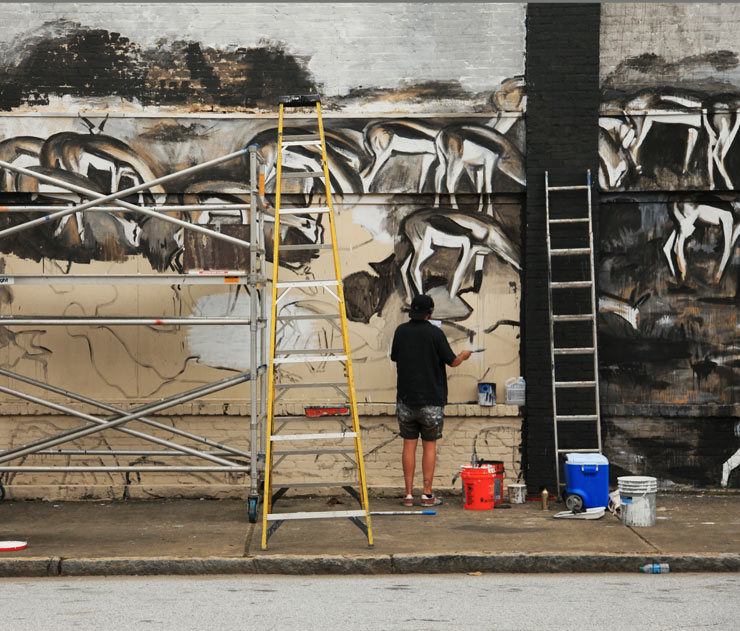 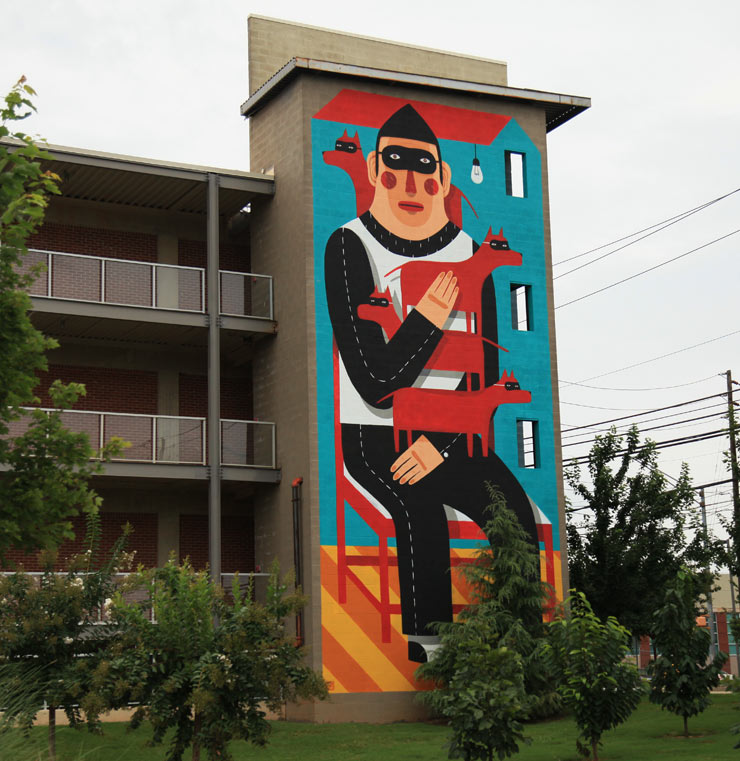 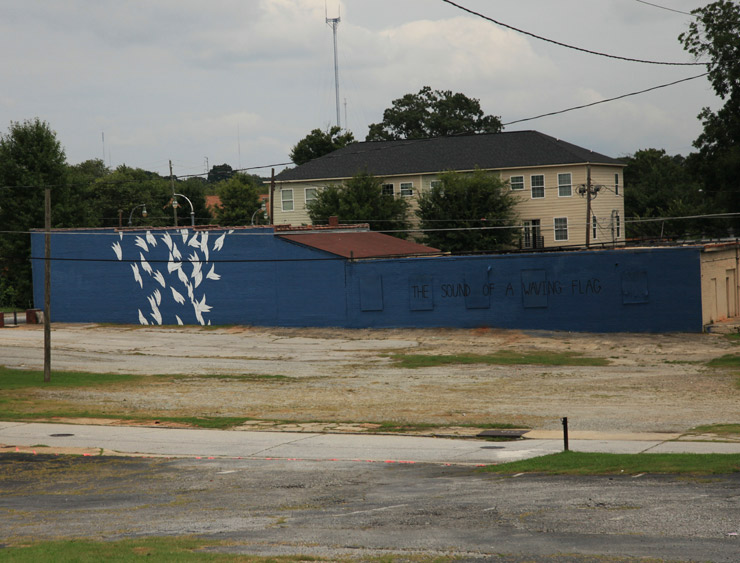 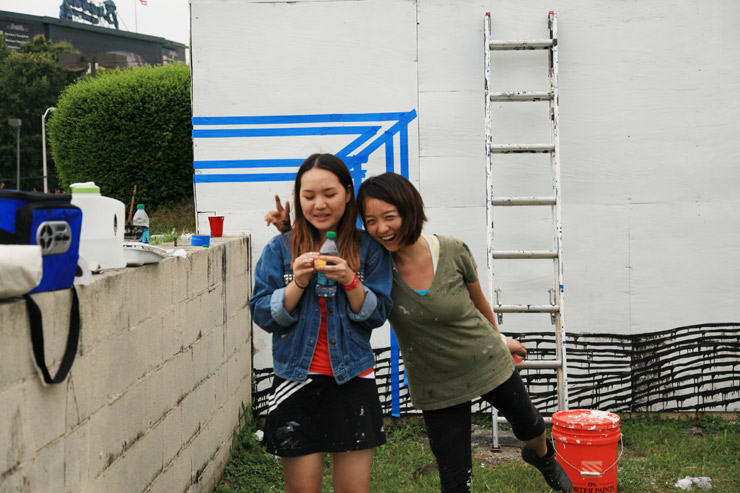 Gyun Hur at work at her first wall ever with her assistant Yoon.  Yoon, as it turns out, is a huge fan of Judith Supine. Living Walls Atlanta 2013. (photo © Jaime Rojo) 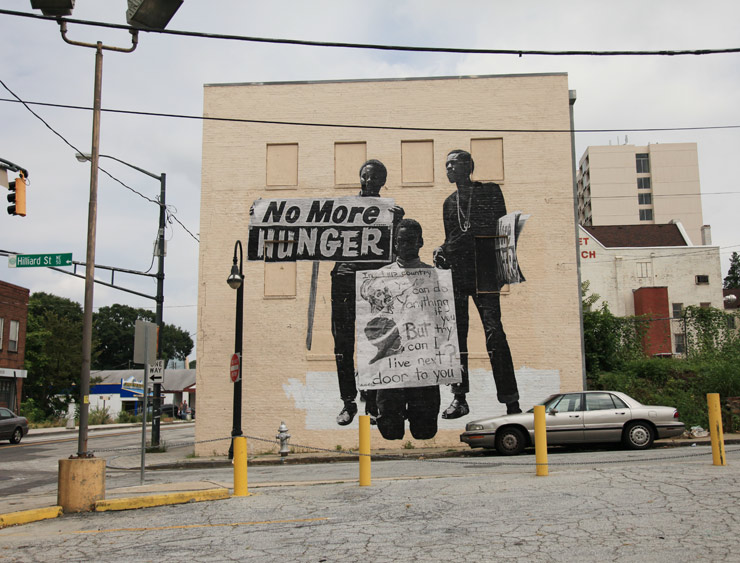 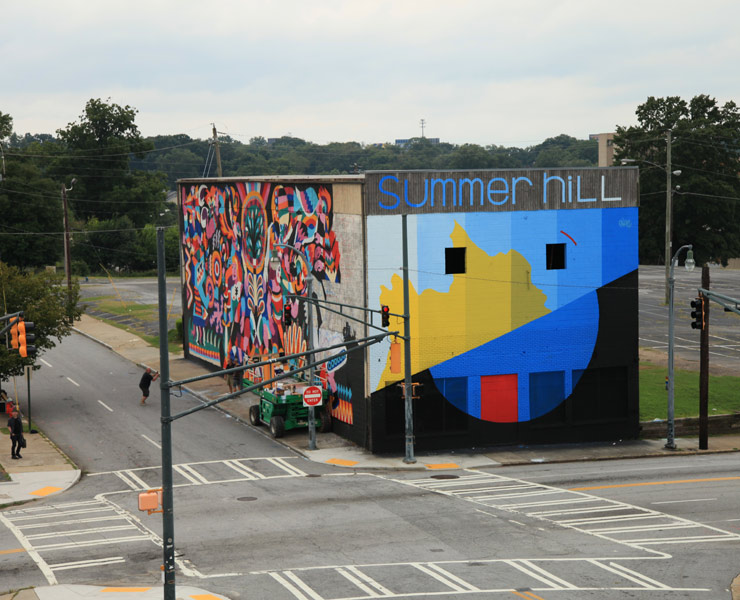 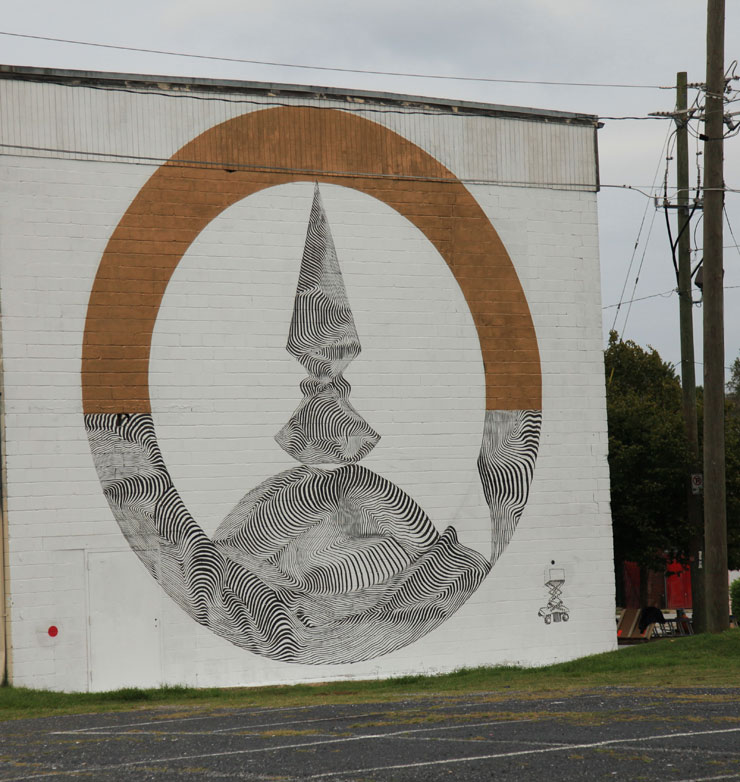 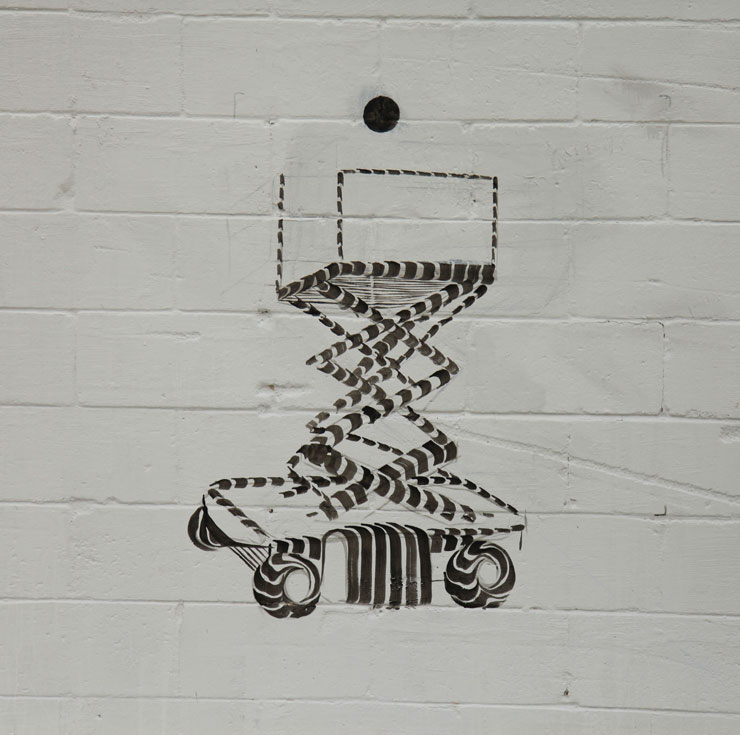 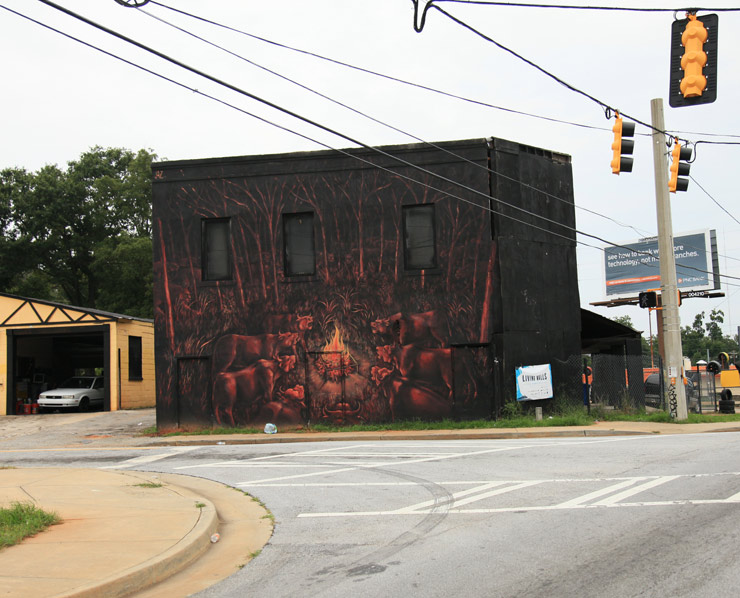 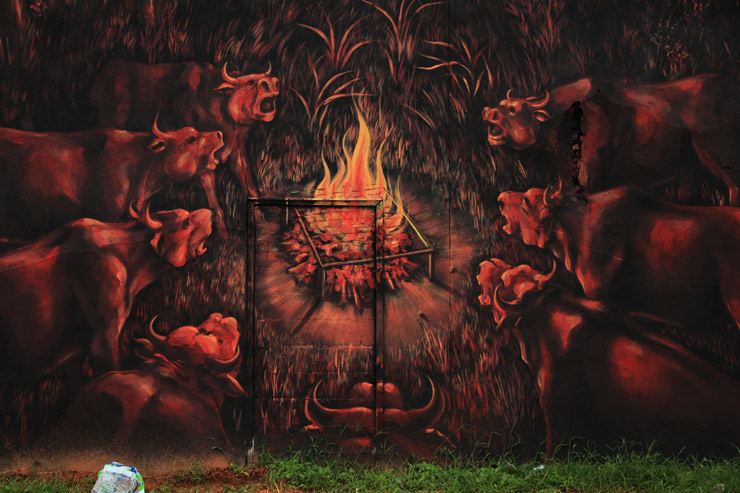 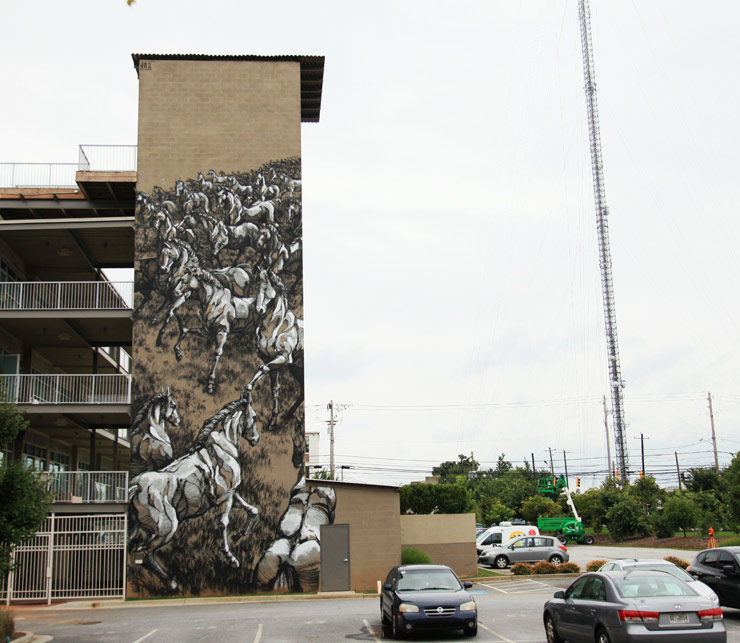 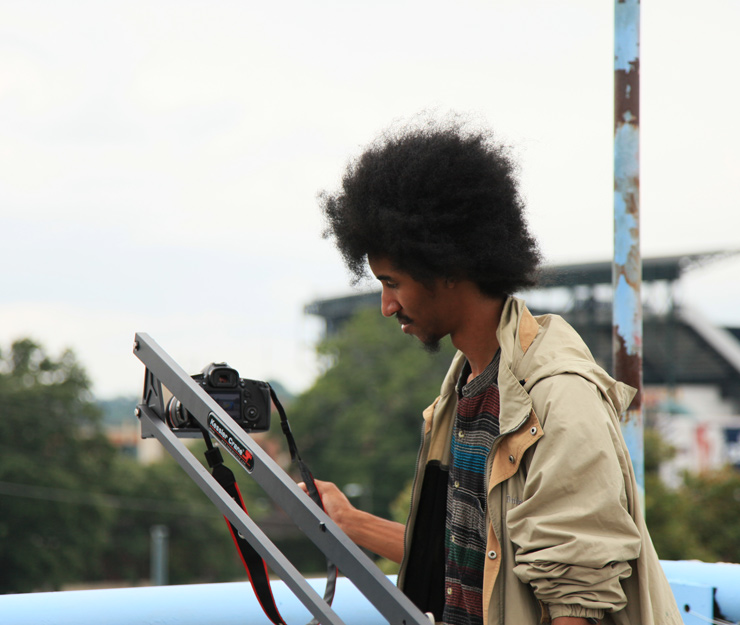 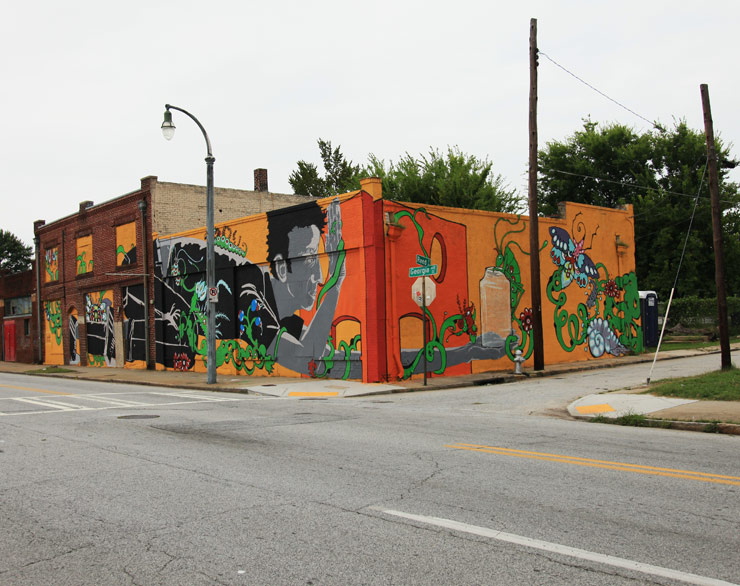 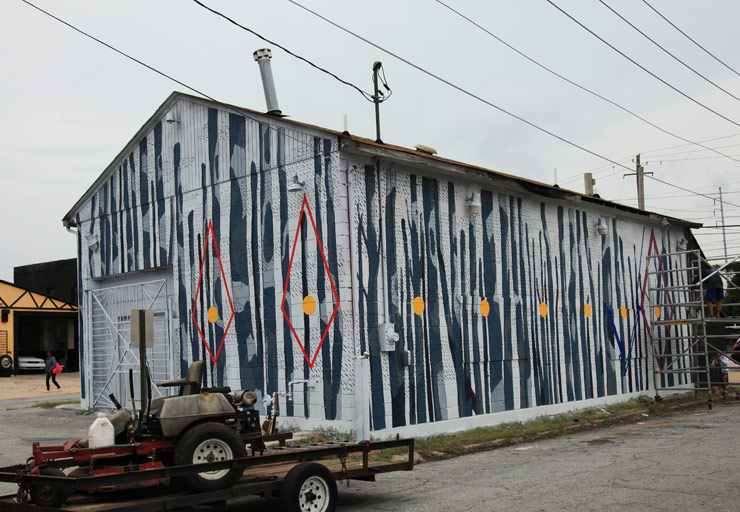 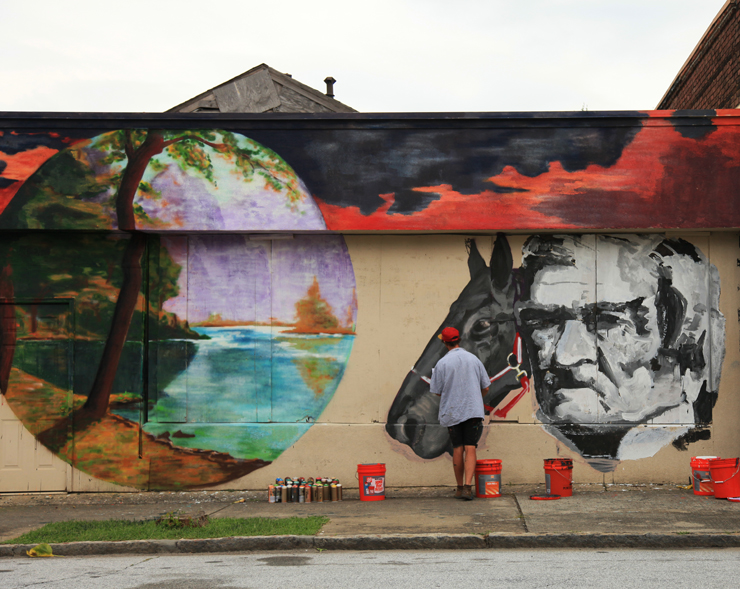 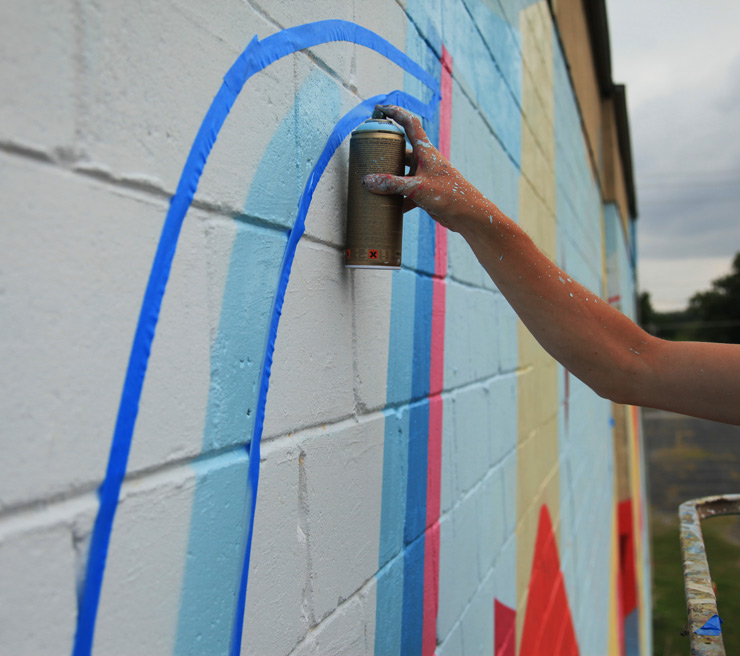 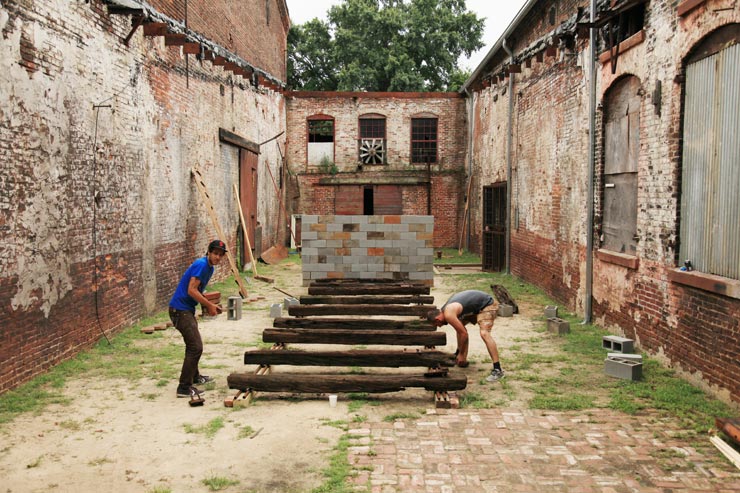 Know Hope and 2501 working on their collaboration on a sculptural installation for Saturday’s Main Event Exhibition at The Goat Farm . Living Walls Atlanta 2013. (photo © Jaime Rojo)

Mr. Fijodor's Phantasmagorical Creatures Somewhere in Italy
Wild Style. No, not the movie nor the distinctive look of aerosol lettering by a graffiti writer. But yes, that is what the Italian Mr. Fijodor refers to when talking about his surreal, simple and spo...
BSA Film Friday: 08.26.16
Our weekly focus on the moving image and art in the streets. And other oddities. Now screening : 1. Ella & Pitr: Utsira Island 2. Shepard Fairey Paints Fannie Lee Chaney mural "Voti...
Pejac is Looking for "Redemption" with Particle Board
Each of us is looking for redemption, or probably will be. At least that appears to be the theme for the new series of works by Spanish Street Artist PEJAC, a few shots of which we have today from hi...
BSA Images Of The Week: 04.12.20 / Dispatch From Isolation # 21
Welcome to BSA Images of the Week! Not much to say this week, except we're all in the thick of it and 20,000 are dead in the US. Stay positive, stay strong, say a prayer for the families who h...
Stohead Sends De-Constructed Letterforms Across a Structure : UN "One Wall" Project
Stohead (Christoph Häßler) started writing graffiti at 14 in southern Germany, where he was born, and last month he completed his largest mural in Berlin for UN, three decades after he began.   St...
2501 3TTman Agostino Iacurci Atlanta Axel Void Brandon Brooklyn Street Art Elian Freddy Sam Georgia Gyun Hur Howdy Neighbor Inti Jaime Rojo Jaz JR Know Hope Laura Bell Living Walls Atlanta 2013 Matt Haffner NANOOK Never 2501 Pastel Steven P. Harrington The Goat Farm Trek Matthews