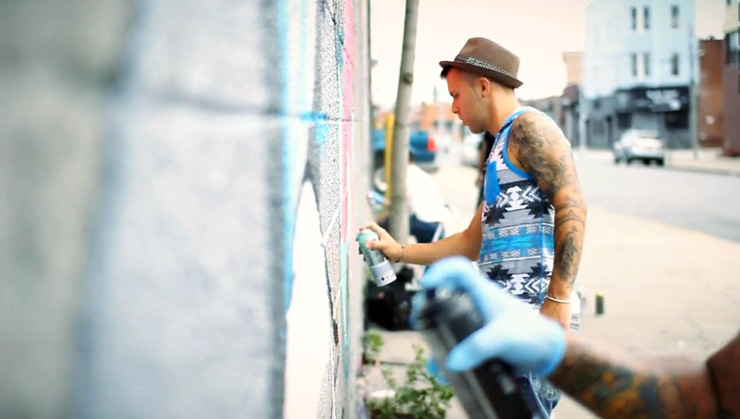 Now screening: Neighborhood Love in Brooklyn by Serringe, Isaac Cordal: The Family, and The Lurkers go to Bulgaria for Summer Fun.

A new film by Serringe that celebrates the magical mix of sun and aerosol and a group of artists/writers/graff dudes all getting up in the neighborhood. The flows are nice, the movements a little hypnotic, the soundtrack allows you to travel, the love is there. Fall in.

Street Artist Issac Cordal has been installing his small cement sculptures in staged scenes ever since Spain began suffering the brunt of the global financial crisis and he saw his country as having been dragged into an an economic, environmental and socialized purgatory. This new gallery show installation caught on video imprisons the organizational man and the entrepreneurial exec alike in much the same way as animals in our factory farms, with similar lighting but more room.  A conceptualist by nature, his message is heavier than cinder blocks some times, yet you won’t deny the devastating effect that his installations can have on your psyche as the camera pans and you see the effects of socialization on a mass level, evocative of cubicled offices and prisons, and may even cause a viewer to question things. Till the next video.

The Lurkers go to Bulgaria for Summer Fun

A self-described “movement” that makes urban exploration a spectator tagging sport, Lurkers may be a small club of skinny London boys in their 20s who like to spraycation through tunnels and abandoned monuments with their model girlfriends, discovering the hidden pockets that time forgot. Or Lurkers may be a well-positioned semi-chaotic lifestyle brand that is accumulating original content to help move product once you are hooked. One can envision the anonymity that these hilarious cartoon heads allow also being a way to extend a franchise once these rascals get old or get bored and need to be replaced. Either way, some of the sequences in their newly begun video series are alternately mundane, raw, soaring, or smartly sly.

It’s so difficult these days when true counterculture is swallowed whole by lifestyle brands and you can’t tell the real thing from the Coca-cola intervention but this is sort of Vice meets Monty Python meets reality show meets Polo with aerosol cans. The touchstones of rebelliousness and tomfoolery appear in a cheerfully non-political context but just as we we start to think that, we learn about world history on this trip, don’t we kids?  What really is lurking beneath the surface? Stop worrying and start adventuring.

Chip Thomas “La Isla Memory Project” in a One-Room Schoolhouse
Street Artists have a natural affinity for abandoned places. Sometimes they wander through them to find the right spot to create a piece. Other times they wonder who used to live here. Who used to wo...
BSA Images Of The Week: 06.24.18
As upbeat as celebrations like today’s LGBTQ Pride events are here in NYC, they are rooted in defiance of the suffocating unjust norms that entrapped people in this city and across the country f...
BSA Images Of The Week: 04.26.15
Here's our weekly interview with the street, this week featuring Bisser, Brolga, C3, D7606, JR, Kafka the Cat, Myth, Nineta, Right of Way NYC, and Urma. Top Image: Bisser. Detail. (photo © Jaim...
Urvanity Madrid Diary 5: Selections From Urvanity Art Fair
This week BSA is in Madrid to capture some highlights on the street, in studio, and at Urvanity 2019, where we are hosting a 3 day "BSA TALKS" conference called "How Deep Is the Street?" Come with us...
Character Witness
Sometimes it is a talisman who is having adventures on the behalf of an artist, a part of him/herself who stays behind and watches the area. At other times it is a character seen through a mirror,...
4SAKN and SEBS Adult Swim Banksy Brooklyn Street Art Bulgaria ELSE HOACS Isaac Cordal Jaime Rojo Okuda OWNS SEGE SEN TWO Serringe Steven P. Harrington The Lurkers Zimer