In a New York minute, the Curtain Opens and Closes on “Inside Out”

The daily snaking lines of now famous fans occupying a slice of the Times Square footprint had their last chance at the Big Time in NYC as last weeks show rolled to a close, and the large eyeball van rolled away. For days this limited engagement Broadway hit and circus-like attraction helped people in and out of the photo studio to have their portrait captured and possibly plastered directly as Street Art. The Parisian photographer and Street Artist JR, well known for creating large scale black and white installations that engage and celebrate everyday people knew that this high profile image-centric hub would be a draw, but the near-continuous lines must have been a surprise. 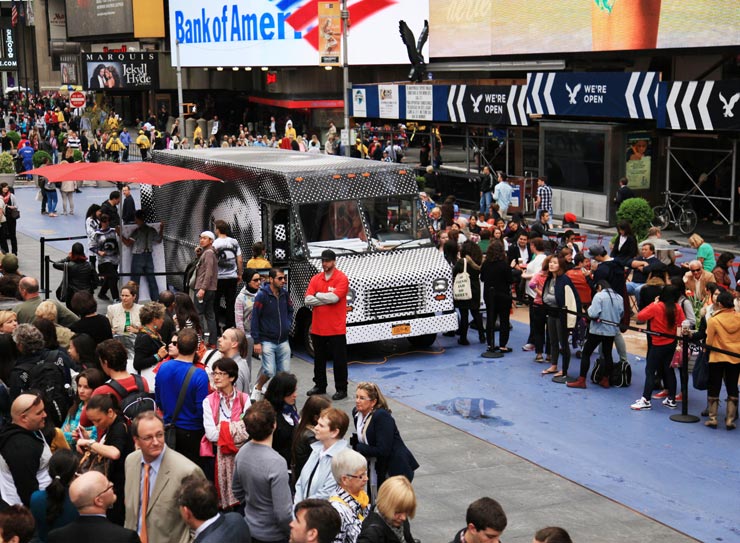 Here where Broadway crosses Seventh for five blocks and slow-moving upward-looking people swim in a sea of logos and interactive screens, where actual New Yorkers are outnumbered by tourists, there was something reassuring about the black and white polka dotted nostalgia of an old-timey mobile photo booth that gave Times Square a nostalgic “Guys and Dolls” revival feeling, even as electronic eyes from corporations, federal, state, and city agencies, and your neighbors phone all surveilled every smile, every preen in 2013. For this multi-day installation, many lucky pedestrians were invited to engage in public art and became the star, sometimes with the director of this production walking among them, helping plaster posters and posing for pictures himself. 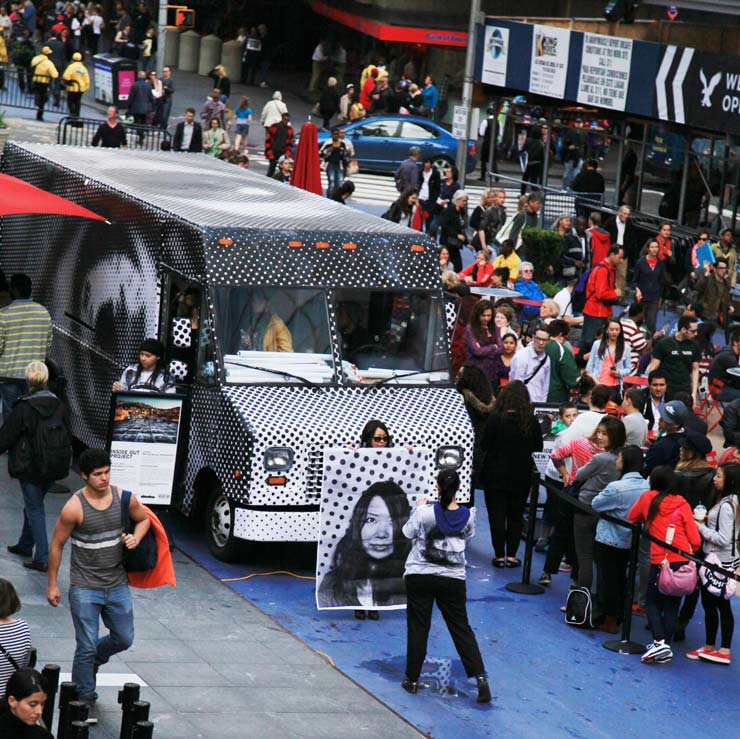 Pulling themselves away from bright furry full-sized cartoon characters and the Naked Cowboy, multitudes of photo-friendly Millenials lined up for their fifteen minutes and pulled along mom and dad and maybe grandma for a chance to be on the billboards of the Great Broad Way.

And then, in a New York minute, it was gone – another ethereal Street Art moment captured before it disappeared. 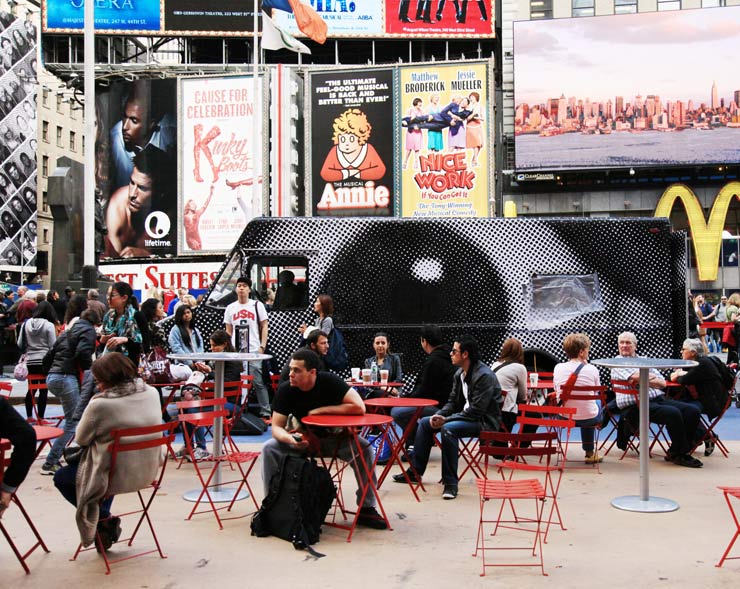 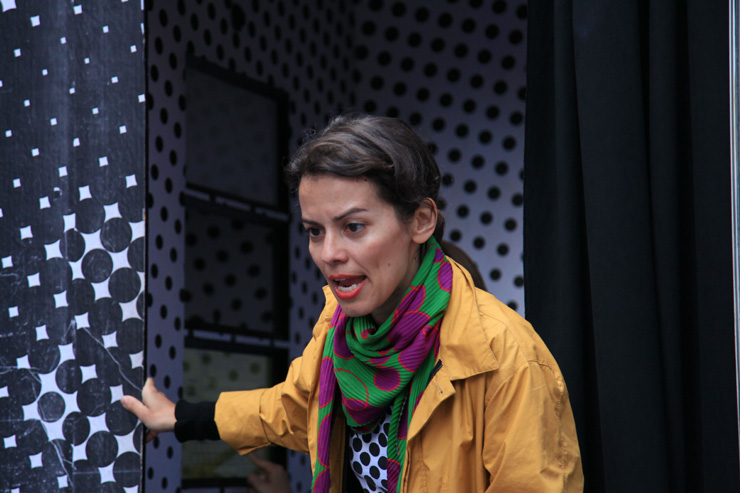 JR Inside Out Project. Times Square, NYC. May 2013. A team member helps with the photo booth. (photo © Jaime Rojo) 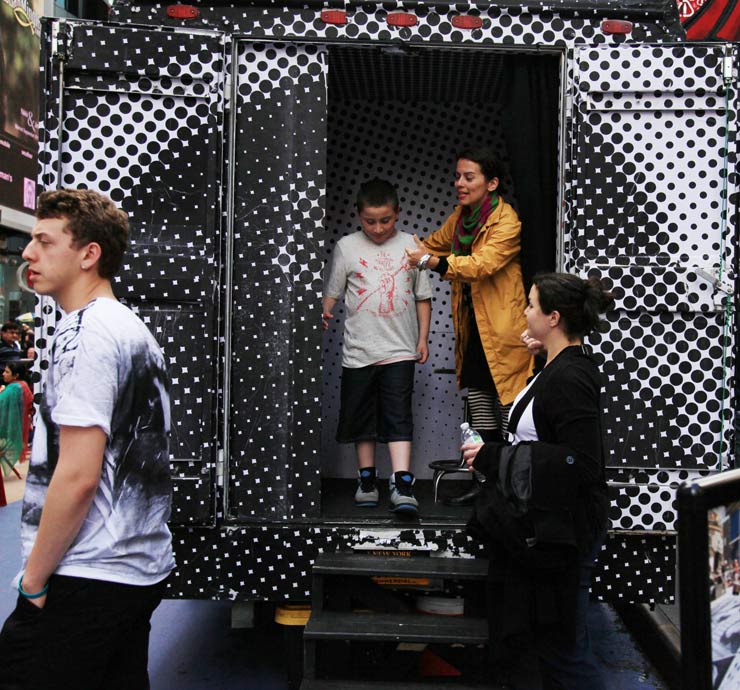 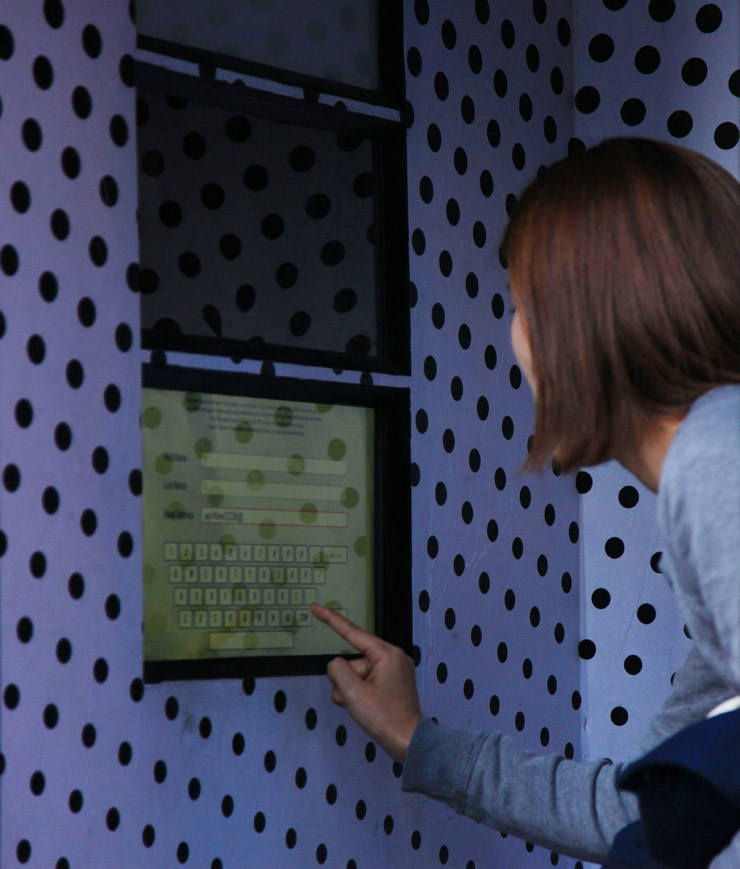 JR Inside Out Project. Times Square, NYC. May 2013. After a long time waiting in line the time for her close-up finally arrives. (photo © Jaime Rojo) 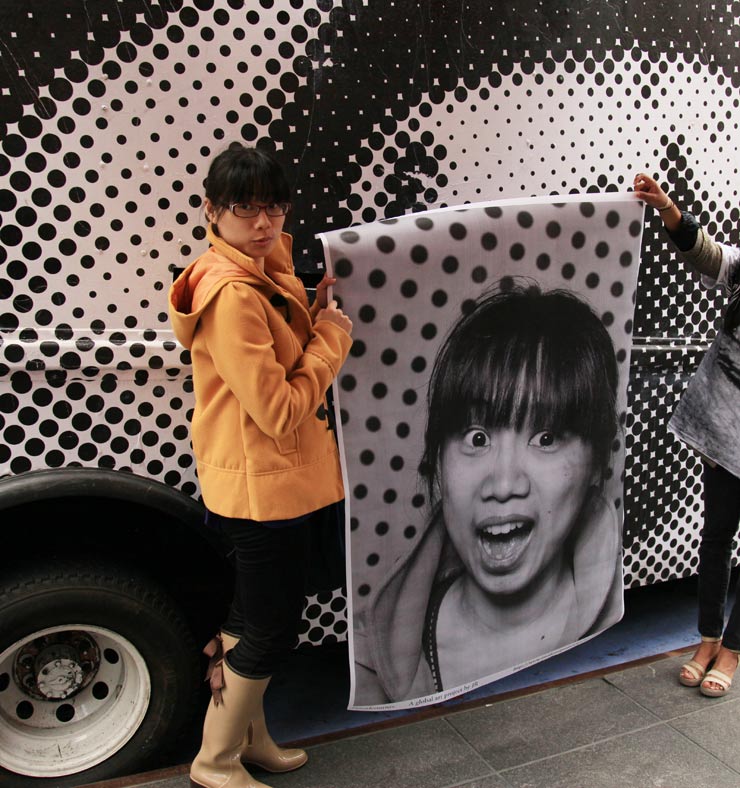 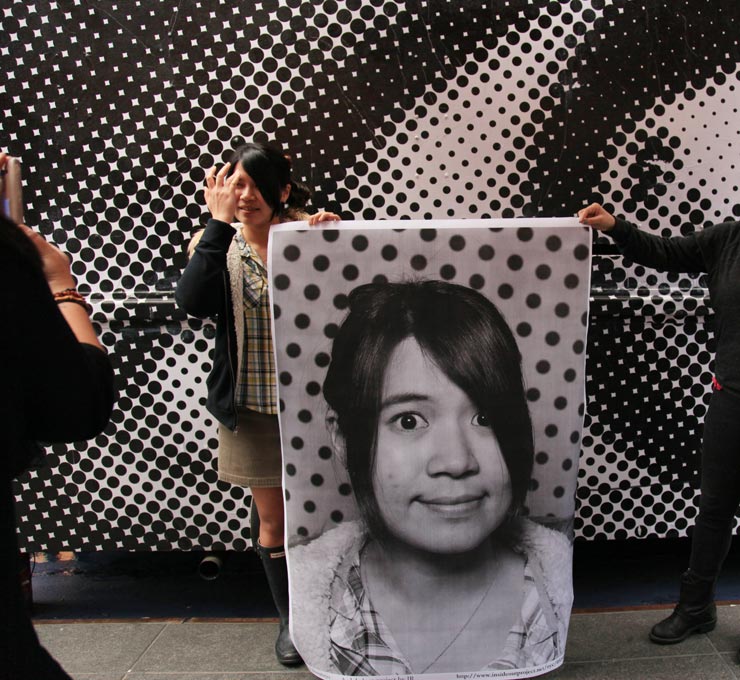 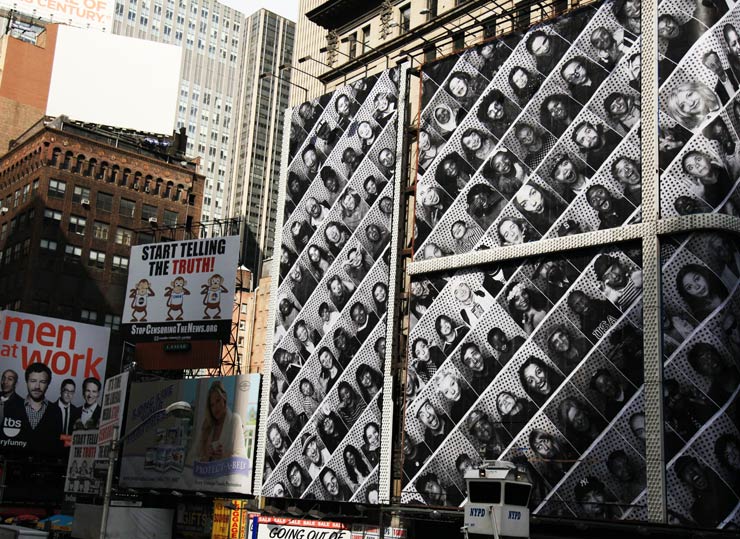 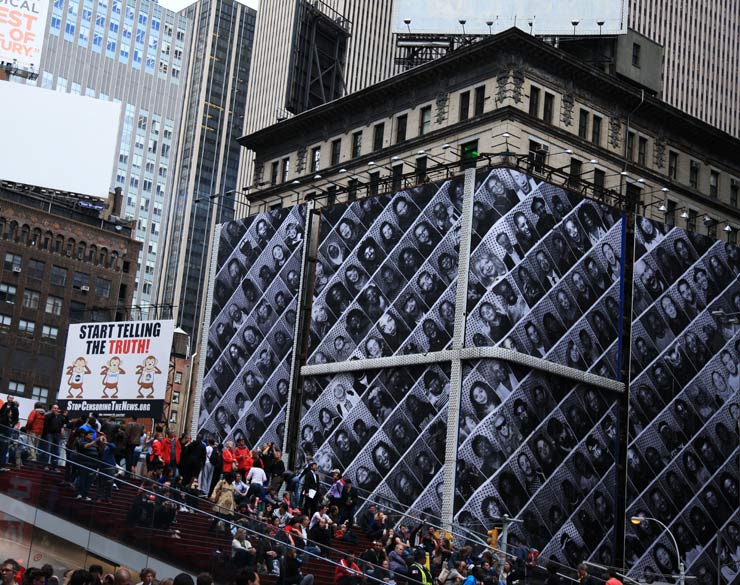 Giulio Vesprini Lights the Aerosol Smoke for "Pennelli Ribelli"
“Do it with passion or not at all!,” says Giulio Vesprini on this acid red cloud of paint that engulfs a portion of his new mural. The fog effect has become popular in public performance of late, addi...
HotTea's "Perspective" on Jasper Johns and "Flags" on his 90th/ Dispatch From Isolation # 53
Something resembling the truth, as painter Jasper Johns may say, is what we hear and see from the storm of disinformation we’re now in. Somewhere we know there is a dissembling of the economic and so...
Bathroom Graffiti on Canvas With Mint & Serf
New canvasses celebrate the graffiti-covered bar bathroom and its aggressive lack of style. A quick snort, a scribbled tag, and you my love. Now that you are caked with sweat and nearly deaf from gy...
BSA HOT LIST: Books For Your Gift Giving 2019
The ephemeral qualities of art in the streets are effectively contradicted by this site, and we have captured much in the time we’ve been documenting the scene. Even, so, it is primarily digital, our...
Gola Hundun Creates a "Tree of Life" for "Land-Shape Festival" in Denmark
Virtually every human culture has an allegorical image that illustrates the Tree of Life. Street Artist Gola Hundun is growing his own in Denmark on the Jutland peninsula - one that he has nam...
Brooklyn Street Art Inside Out Project Jaime Rojo JR NYC Steven P. Harrington Times Square