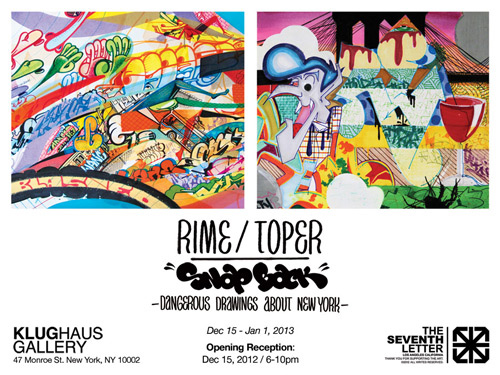 In celebration of Klughaus Gallery’s one-year anniversary, we are thrilled to announce “Snap Back – Dangerous Drawings About New York,” a dual artist show featuring Brooklyn natives RIME (Jersey Joe) and TOPER. “Snap Back” will feature illustrations and paintings that integrate elements of the artists’ past experiences living in New York City; each piece is inspired by a personal story. “TOPER is one of my oldest friends and a very talented guy with a very interesting life experience,” says RIME. “This show aims to tap into our life experience coming up in New York.”

Best known for his explosive use of color combined with dynamic lettering and innovative characters, RIME started painting graffiti in Staten Island in 1991. He spent many years mastering his style throughout New York and New Jersey and had achieved international recognition for his distinct aesthetic by 2003. In 2005, RIME moved to Los Angeles to concentrate on fine art. It was also in 2005 that he became a member of the legendary crew MSK. This marks the first time in almost a decade that RIME will be headlining a show back in his hometown.

TOPER grew up painting alongside such legends as Dash Snow (SACE), REVS, DG, SETUP, SCOPE, and of course, RIME, after the two met growing up in Staten Island. TOPER’s name has been known and respected in the New York graffiti art scene since the mid-to-late 1990s as a writer known for his distinctive New York street-motivated style, a technique he is now channeling into his fine art.

finDAC Shines as Poseidia Rises In Berlin
Atlantis didn’t arise, as the prophetic clairvoyant Edgar Cayce said it would, but Poseidia certainly did only six months ago here on a Berlin street thanks to Irish Street Artist and fine artist fin...
Tag & Buff Duet: SABER and Zes Capture the Tension in LA (VIDEO)
When you live in certain cities you are accustomed to the sort of cat and mouse game that municipalities play with graffiti taggers/writers with the cancelling out of one another’s work with paint. To...
Happy Thanksgiving 2020 From BSA
It's been a difficult year for many. We hope that each of us can find something to be thankful for, and develop an attitude of gratitude. We look forward to being able to gather with friends and fami...
BSA Images Of The Week: 10.06.19
Welcome to BSA Images of the Week! Welcome to October - the time when the leaves turn yellow and orange and when your local pharmacy is selling Halloween candy and Christmas decorations because w...
Nicola Alessandrini Balances Body and Earth Systems Holistically in Santa Croce di Magliano
Painting with a holistic approach to life, the earth, the physical-psycho-social balance of humans in daily life – why not? Nicola Alessandrini. Premio Antonio Giordano. Santa Croce di Magliano, ...
Brooklyn Street Art Klughaus Gallery Manhattan NYC Rime TOPER