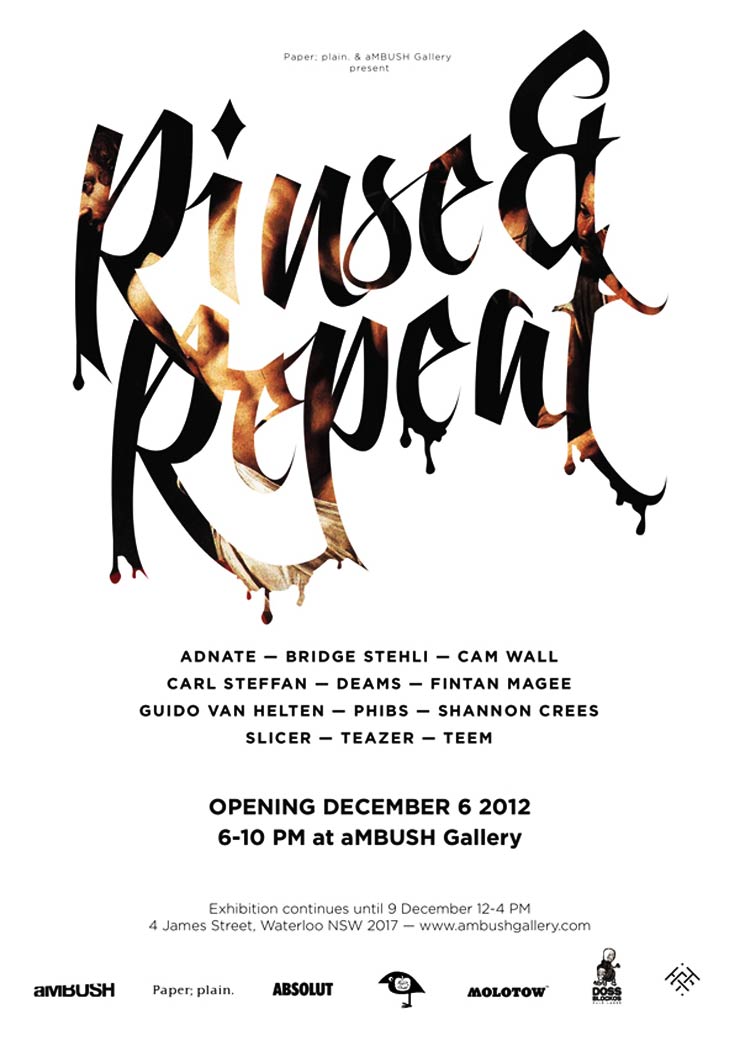 For centuries, art has marched alongside history, and history alongside art. Each movement, from the painstakingly detailed oils of the Renaissance to the tongue-in-cheek boldness of 1960s Pop Art, has marked and been marked by the great heights and most regrettable lows of its cultural and temporal context.
Having bubbled below the surface, in tunnels, on train lines and under the ominous cloak of midnight hours, the persistent and controversial street art and graffiti subculture has burst into the foreground of popular attention and established itself, however unexpectedly, as the defining art movement of our time.
Characterised by conflict, enigma and the burgeoning curiosity of growing audiences, it is undeniable that this movement belongs in the same echelon as other controversial, yet ultimately significant and culturally reflective art movements of centuries past.
Rinse and Repeat seeks to articulate this sentiment by showcasing the work of twelve Australian established and emerging street and graffiti artists as they find inspiration in history’s master works and reinterpret them from the perspective of today’s most prevalent and exciting art form.
Comprising the work of Adnate (AWOL Crew), Bridge Stehli, Cam Wall, Carl Steffan, Deams (AWOL Crew), Fintan Magee, Guido van Helten, Phibs, Shannon Crees,  Slicer (AWOL Crew) , Team and Teazer, Rinse and Repeat articulates the evolution of a movement that, in its irrepressibility, has rendered it the defining art form of contemporary culture.
Proudly supported by aMBUSH, ABSOLUT, The Apple Thief, Doss Blockos and premium paint brand Molotow, Rinse and Repeat launches at aMBUSH Gallery on Thursday 6 December from 6-10pm. The exhibition continues until Sunday 9 December 12-14pm.
What: Rinse & Repeat
Where: aMBUSH Gallery, 4a James Street, Waterloo (Sydney)
When: Thursday 6 December
Time: 6pm-10pm
Cost: Free Public Event
More info: www.ambushgallery.com

MTO and “The Wynwood Family”
Street Artist and muralist MTO spent the entire month of December in Miami. Sounds terrible right? The photo realistic painter also brought his family – or maybe you would say he left them. “The whol...
Graffiti Writer "Miedo 12" for Contorno Urbano Project 12 + 1 in Barcelona
“Just like a drop of water is the origin of everything, here the spray is the one that, with its effluvium, originates the clouds of inspiration,” says MIEDO 12, the graffiti writer about his le...
BSA Film Friday: 08.26.22
Our weekly focus on the moving image and art in the streets. And other oddities. Now screening:1. Bandaloop. Excerpts from Field. Part II of the multi-year work LOOM.2. Bandaloop. FLOOD, Worl...
The Hate Lovers. "SAVE THE PLANET!" in Barcelona
Collectives of artists frequently form based on common styles, interests, and philosophies. In Barcelona an all female group of artists coalesced to form The Hate Lovers a few years ago to promote t...
Skount Reveals "Inner Colour" in Amsterdam
After a year that included painting walls and exhibiting canvasses and giving talks about his mythologically inspired painted universe in Australia, US, France, Spain, and the Netherlands in 2013, Str...
Adnate (AWOL Crew) Ambush Gallery Australia Bridge Stehli Brooklyn Street Art Cam Wall Carl Steffan Deams (AWOL Crew) Fintan Magee Guido van Helten PHIBS Shannon Crees Slicer (AWOL Crew) Sydney Team and Teazer