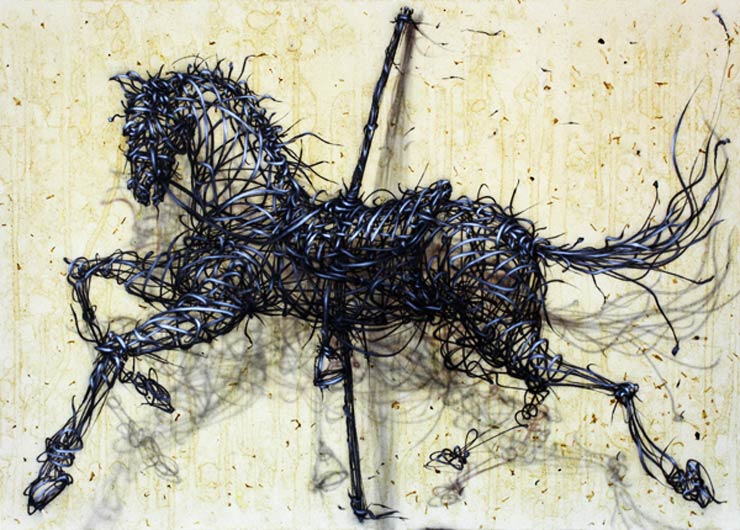 Jonathan LeVine Gallery in association with Sara & Marc Schiller of Wooster Collective are pleased to present Powder of Light, a series of new works on canvas by Chinese-born, South Africa-based artist DALeast, in what will be his first solo exhibition in the United States.

Works in Powder of Lightcombine acrylic, ink and spray paint on a background texture of tea-stained canvas. DALeast paints animal figures in his signature style using a swirling vortex of organic black lines with white highlights. He creates a ribbon-like effect to form sinuous creatures that vibrate with kinetic energy. Horses, eagles, camels and rams leap off the picture plane, their shadows trailing behind them. Some appear to unravel while others merge together or attack one other. The artist draws inspiration from dichotomies such as the material and spiritual world, human emotion and animal nature.The existential concept behind the show title Powder of Light relates to both science and spirituality. Powder refers to the way every particle of physical matter in the universe is connected and related on a sub-atomic, molecular level. Light refers to the energy from which everything is created and the life force of all living beings. The constant movement and development of matter into infinite forms of life ensures unique perception and identity as individuals within the greater shared collective experience.

ABOUT THE ARTIST DALeast was born in 1984 in China and is currently based in Cape Town, South Africa. He studied sculpture at the Institute of Fine Arts and began making art in public spaces in 2004. His murals can be found in cities around the world. In January of 2012, DALeast’s work was included in Hybrid Thinking, a group exhibition curated by Sara & Marc Schiller of Wooster Collective at Jonathan LeVine Gallery.

Tatyana Fazlalizadeh: When the Lion Roars Back, a small overview
We're excited because today we get to spend a few minutes on stage with one of our hometown heroes, the artist Tatyana Fazlalizadeh. Leveraging her artistry with her politics with her desire to suppo...
ASU Calligraffiti and Contorno Urbano
“Leave the rationality of your brain and listen to your heart, what you feel, what vibrates,” recommends ASU, the muralist painting the Contorno Urbano wall in Barcelona this month. ...
BSA Film Friday: 04.22.22
Our weekly focus on the moving image and art in the streets. And other oddities. Now screening:1. Dyva & Haeck painting on the Molotow traTheo Jansen: Strandbeest2. AMERICAN DREAM. America...
Priest Comes to Brooklyn and Puts Ego on the Alter
Priests are really taking a beating in public opinion these days, and with good reason (see U.N. report this week). One New Orleans priest visiting Brooklyn this week hopes to change all those negativ...
Hyland Mather. Street Assemblage and his Scupture at Artmossphere 2018, Moscow
BSA is in Moscow as curators of 50+ international artists in the Artmossphere Biennale 2018 for its 3rd edition called Street Art Wave. Till the end of the month we’ll working with a stellar cross s...
Brooklyn Street Art DALeast Jonathan Levine Gallery Manhattan NYC