Buff Your Own Stuff

Now you have heard it all! – A graffiti artist taking the big beige buff to his own large 20 foot long piece. Yet another performance by Saber, who can safely add conceptual to the adjectives that describe his work as artist. 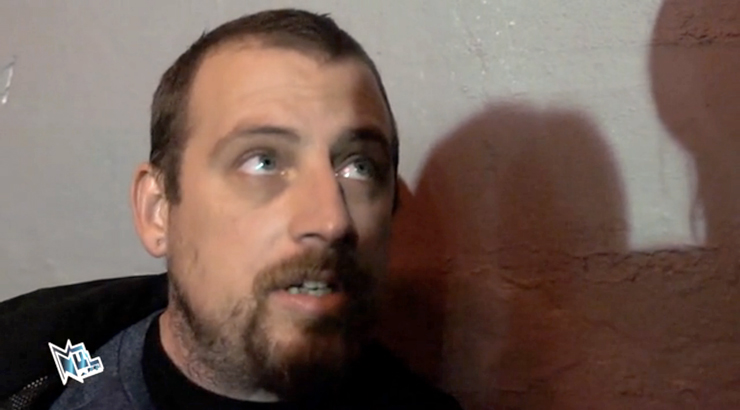 “I’m coming from the future. And the future that I experience is grey and beige and the artwork is destroyed and our history is gone and eradicated,” says Saber during his  performance at the Nuart 2012 festival that invites Street Artists from around the world to paint walls in this European Capital of Culture, the oil-rich city of Stavanger, Norway. 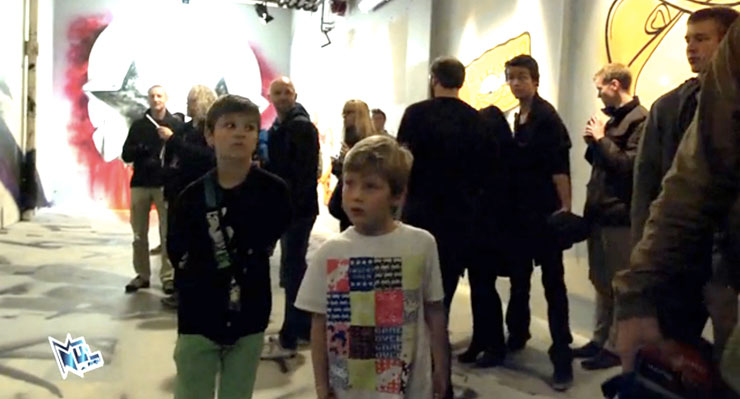 Far from the city of Los Angeles, where he has been outspoken against various shades of intolerance over many years as artist and activist, and far from New York City, where he last month organized the skywriting campaign in blue skies over the region in support of public arts funding in the US, the sharp tongued Saber went for pure drama at the group show opening in September. His target in this case was the use of the term “no tolerance” that has been heard more often in recent years along with it’s cousin “zero tolerance”, proclaimed by certain elected and unelected standard bearers wildly across the spectrum when addressing issues as diverse as law enforcement, drug use, education, sexuality, truancy, religious expression, reality TV, fashion choices, and various forms of art on the streets. Seizing the zeitgeist, some liberal folk will even talk about having a sort of “zero-tolerance” for intolerance. The fear addressed by Saber of course is the misuse of these terms that can verge on hyberbole and lead to a sort of blanket fanaticism when miss-applied. “If they want to continue to elect political figures that use the words ‘no tolerance’ then the world they are going to see is going to have a very ugly future,” the high intensity Saber says in this video during his simple performance. 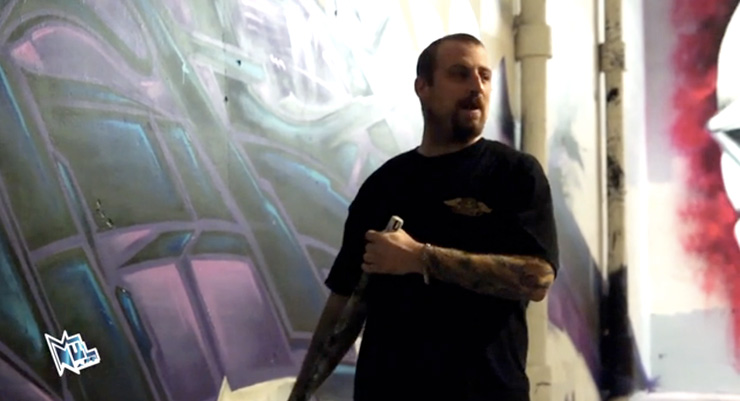 As PR and ad agencies and political campaigns will tell you, the way any topic is framed will lead to a public perception and eventually even public policy – “war on cancer” is much more galvanizing than “medical research into methodologies for curing various conditions classified as cancer” for example. As with any single-phrase campaign, each of us knows that it is shorthand for something greater and the issue is often far more complex and weighty than a slogan like “War on (your word here)” can thoroughly address.  But the lacerating style of Saber’s in-show demonstration here is probably meant to be a blunt counterweight to the over-simplified arguments against all manner of public art that stylistically smacks of an illegal kind. 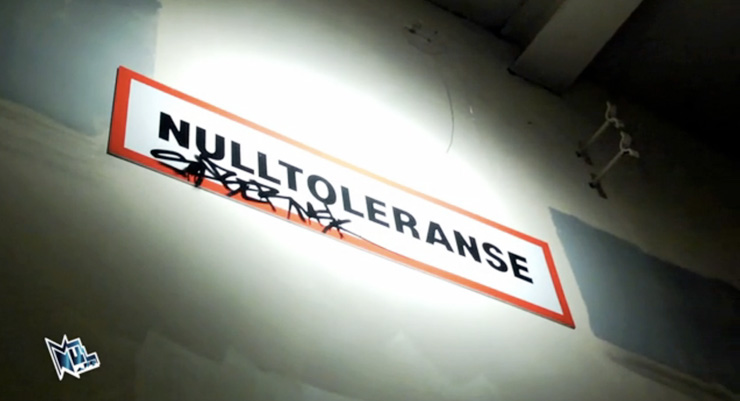 Essentially this is one more argument for free speech and free expression. Clearly this case of wild handed and stylized graffiti artwork inside a gallery at the invitation of it’s organizers is approved and encouraged. Saber’s concern here is a future where the demonizing of this style of work (or any artwork) in or outside the gallery could begin a slide down a slippery slope where certain art is regulated, banned, even criminalized. It sounds extreme, but stranger things have happened in human history, and this artist makes a very public show of it. 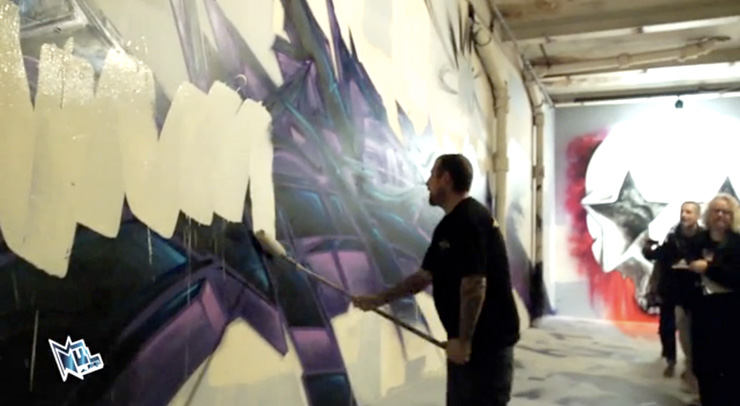 INDECLINE Mounts "People's Prison" Inside Trump Hotel
An ingenious pop-up installation of politically charged art and performance arrived at a Trump hotel in Manhattan yesterday and departed just as fast, with the anonymous Street Art troupe INDECLINE de...
Fra Biancoshock Builds an Aerosol Can Ladder "Beyond" in Milan
Looks like Biancoshock is feeling a little nostalgic for his wall-hopping days with this simple ladder made of aerosol paint cans. When talking about the graffiti and Street Art scene it is ...
Images of The Week 06.13.10
Our weekly interview with the street, this week featuring Gaia, Ludo, Liv, MBW, Beau, Yote, Clown Soldier, Faile, Man Standing, Roa, Sweet Toof, Headhoods, and Holy Family
Coffee Break in a Garbage Can with Etam Cru in Rome
Poland’s Bezt and Sainer of Etam Cru start your week with a cup of coffee and this wall completed during late October in Rome. The soaring mural features the illustration style and palette that has di...
1UP, Martha Cooper, Jaime Rojo: The Print Pops
1UP . Graffiti Prints. (photo © Jaime Rojo) It was May, there were birds singing in the trees, the smell of aerosol spray in the air, and steady traffic on the Bülowstrasse as we walked past the Ur...
Brooklyn Street Art Jaime Rojo Nuart 2012 Saber Steven P. Harrington