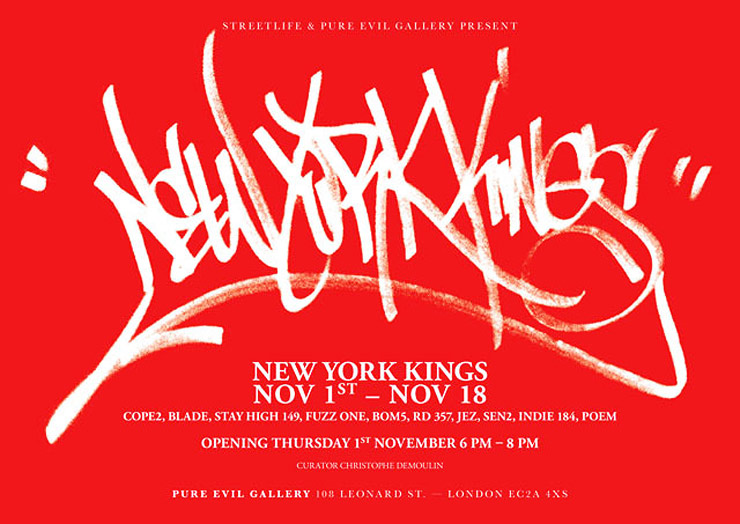 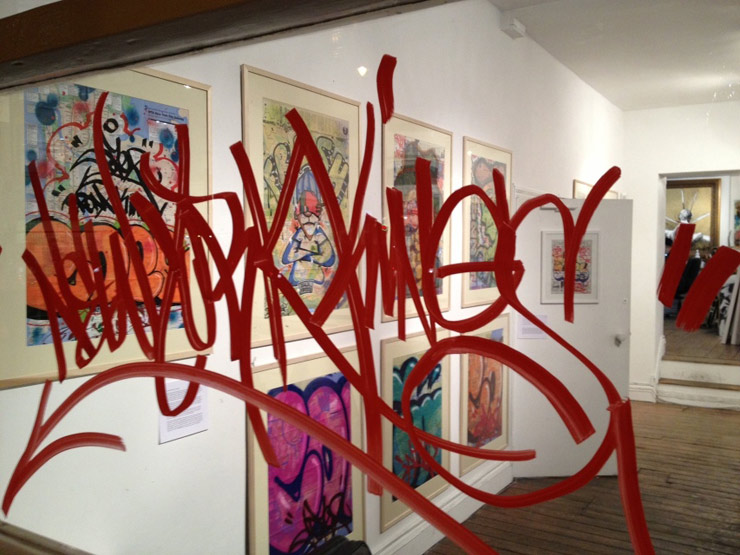 Over three decades ago, the mean streets and projects of Philly, Detroit & NYC began to blossom bright with spray-painted tales and tags of inner-city ‘hoodrats armed with spray cans, innate artistic talent, and a way with words and imagery whether it be spoken or drawn that demanded to be seen and heard.

The best became known as graffiti kings, a title not easily won. this small band of guerilla artists, innovators of a now global art form are one of the few to earn the right to incorporate the crown image in their art or above their tag, through accruing the highest number of tags in the most difficult to access places or most openly defiant public spaces.

Stylish, subversive, in-yer-face political and social comment perpetrated by anonymous tagsters using the city and its transport systems as their urban canvas. now banned from street and subway, the new york kings have found another way to express themselves, more contained this time but no less ironic.

In London for the first time in over a decade, a unique exhibition of the godfathers of graffiti art using new york subway maps as their canvas to tell their 30 year story while remaining true to their roots. this is a rare opportunity to see examples of a genre that is often temporary by its very nature.
Even more special is the limited availability to own a work of urban art that is also a piece of history.

Sebas Velasco: An Old Master Modern, Building a Future Past
A young master painting in the Old Master vein, perhaps, this Spanish poet captures something between the past and the future. Sebas Velasco is not yet 6 years out from his Masters in painting, yet h...
BSA Images Of The Week: 06.17.18: The Bushwick Collective Edition 2018
Bushwick is in the mix this week as the new murals made to augment the collection for this years Bushwick Collective Block Party brought more persons and personality to the streets here. As mura...
BSA Film Friday: 04.04.14
Our weekly focus on the moving image and art in the streets. And other oddities. Now screening : 1. SWOON - The Run Up 2. Medvin Sobio announces Coachella Walls 3. Ben Eine and "Amusement" 4....
Joe Iurato and "Cabin Fever" at Taglialatella
“I guess this is what happens when you can’t leave your home for a year,” says Joe Iurato. Undoubtedly that is why its called “Cabin Fever” Joe Iurato. Cabin Fever. Taglialatella Galleries NY. (ph...
Esteban Del Valle is "Displacing Waves" in Los Angeles
Consider for a moment the irony of attending a gallery for an art show that confronts gentrification. Currently some critical philosophies born of urban studies and a fascination with the impact of a ...
Blade BOM5 Brooklyn Street Art Cope2 DECK EASY Fuzz One INDIE 184 JOZ London POEM Pure Evil Gallery RD 357 SEN2 STAY HIGH 149 U.K.