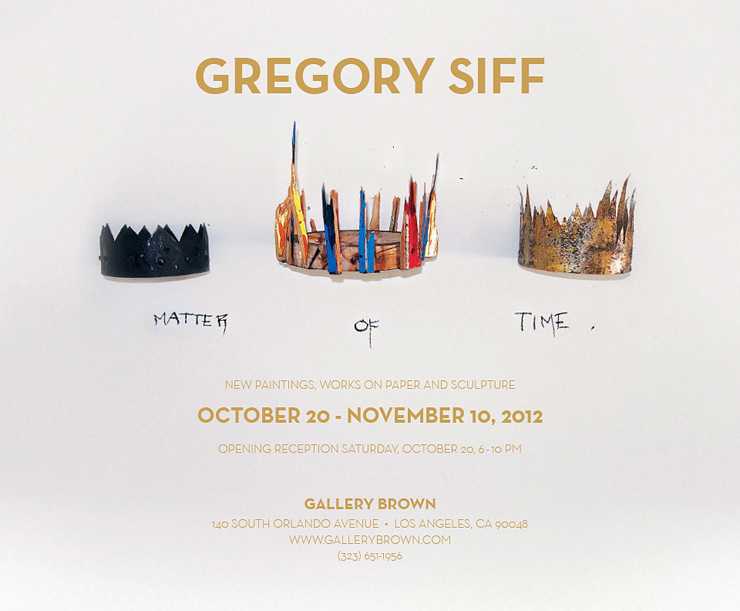 Gallery Brown is thrilled to announce Matter of Time, an exhibition of new paintings, works on paper and sculpture from artist Gregory Siff. Born and raised in Brooklyn, Gregory officially made Los Angeles home in 2009 where he has since established himself as a recognizable cultural influence.

Matter of Time is an examination of fame, idolatry, memory, determination, kingship and heart. Gregory’s half-whispered thoughts are painted out in full roars on found material, handmade panel and canvas.

Gregory’s first solo show in 2011, G, at La Fonderie in Los Angeles was quickly followed by There & Back at Siren Studio’s Rooftop Sessions to much acclaim. Commissions include The Standard Hotel and De La Barracuda Wall. In New York, his work was featured in The Deitch Projects Art Parades. His work has also been exhibited in London, Dublin, Italy and Vancouver, and has appeared in Andy Warhol’s Interview Magazine, Paper Mag, The LA Times, Complex and Glamour. Most recently, Gregory won the 2012 Los Angeles Red Bull Curates: The Road to Art Basel, Miami where his work will be featured.

“I make paintings to hang on your wall, I play characters you meet in your dreams, and I write stories you heard when you were falling asleep as a kid.” – Gregory Siff

AwerOne Paints "Mindscapes 22" in Potsdam, Germany
AwerOne. Mindscapes 22. Localize Festival 2022. Potsdam, Germany. (photo courtesy of the artist) The ebbing and flowing of AwerOne’s mind appear uniquely suited to this site of the Localize festiv...
We Love Paris In The Spring Time! New Shots of Street Art.
When Cole Porter wrote “I love Paris in the Springtime!” in 1953 he probably was thinking of showgirls and their suitors and the wickedness of the Montmartre dance halls in the 1890s, but when photogr...
BSA Images Of The Week: 11.25.18
You made it! Thanksgiving is over and you did not explode from eating too much pumpkin pie. Right? A number of subverting artists and activists took over billboards in cities around the world this ...
Opiatic Overunder Gives You Poppies in Cleveland
As we enter into the languid sweaty city summer of your dreams and the cloud of concrete dust and carbon dioxide kicked up by passing cars settles onto your dewey skin, it's time to spend a few hours ...
BSA Film Friday: 03.25.22
f Our weekly focus on the moving image and art in the streets. And other oddities. Now screening:1. SpY Reflection2. One Minute of Dance Per Day March 20, 2022: Danse 2623 - Nadia Vadori-Ga...
Brooklyn Street Art CA Gallery Brown Gregory Siff Los Angeles