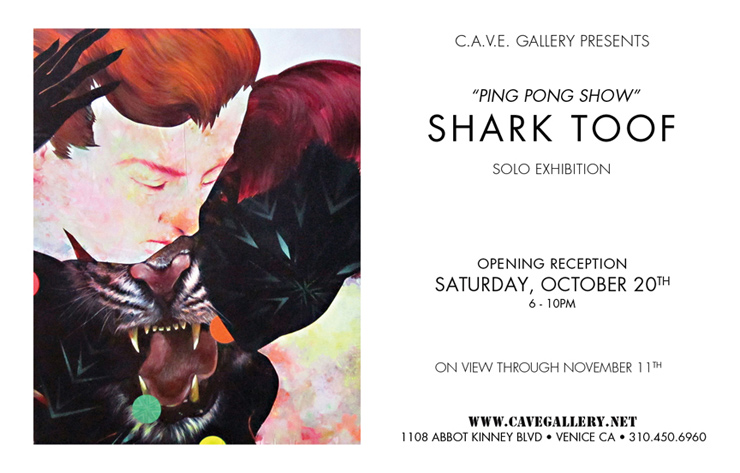 Please join us for the opening reception
Saturday, October 20,  7 – 10pm

On view thru November 10

SHARK TOOF’s new book will also be available at the reception.

Ping Pong Show is the spectacle of romance and nature.  Nature and romance are adversaries in a constant battle akin to the idea of predator versus prey.  Core belief systems are challenged.  These uncomfortable proximities provoke questions and leave the viewer reflecting about the complexity of social interaction.

Shark Toof has taken an ambitious parallel path to his iconic street work and created a spectacular new series of paintings that express a bold conceptual vision and the technical merit of his multi media skills. The exhibition will showcase original paintings in which the artist skillfully juxtaposes textures, employs precise lines and traditional rendering, in dynamic and complex compositions saturated with of color – and with meaning.

Invader: "Invasion Los Angeles" Book and "Into the White Cube" Exhibition
One thing that some Street Artists do when their work enters the white cube is drop the “street” from their official moniker, instead preferring to be known simply as an “artist”. The decision is poss...
Icy & Sot x Moniker x BSA
In advance of Moniker in Brooklyn this May, we are interviewing some of the artists who are influenced both by street practice and fine art as the contemporary urban art category continues to evol...
BSA Film Friday: 06.17.16
Our weekly focus on the moving image and art in the streets. And other oddities. Now screening : 1. Portrait of an Artist Guido Van Helten 2. Who's Your Daddy? 3. Shida Bombing - Hong ...
Futura 2000 In Studio and "The 5 Elements"
EARTH, AIR, FIRE, and WATER. And FUTURA 2000. These are the five elements. “Hey Guys!” he bellows from the doorway and invites us in. Futura (photo © Jaime Rojo) A non-stop full-voiced welcome fill...
BSA Images Of The Week: 08.26.18 / Moscow Special
It's part of the fascinating world that you inhabit when you follow street art - you have no idea what you will discover in any city at any time because of it's LIVE daily evolutionary perso...
Brooklyn Street Art C.A.V.E. Gallery CA Shark Toof Venice Beach