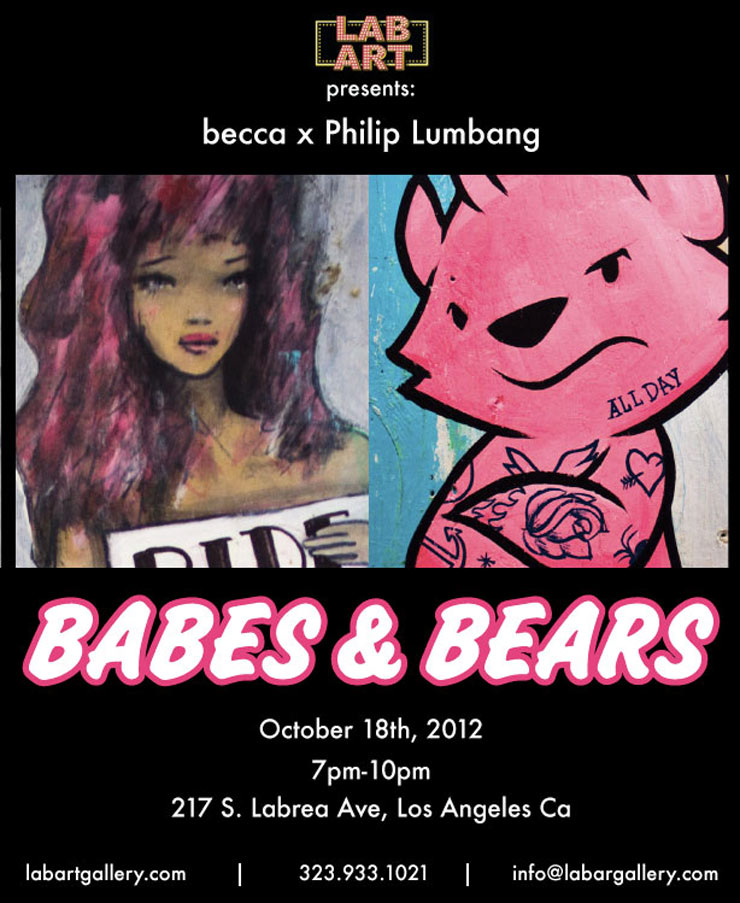 LAB ART Gallery hosts a collaborative show by renowned street artists, Becca and Philip Lumbang titled, ‘Babes and Bears’ which opens its doors to the public on October 18th and runs until November 15th.

Taking her work to the streets since the late 80’s, Becca is considered pivotal in pioneering the street art movement’s transition from graffiti to art status. Her work has been exhibited across the country over the last two decades, and her ubiquitous, carefree images of women, girls and animals, which decorate our urban landscape, have attracted fans and notable art collectors alike and added a feminine touch to a primarily male dominated art form.

“ I try to bring my characters to life, I like to have company and that’s what my paintings are, they’re tangible. It hurts when pieces have a short shelf life on the streets, especially since they’re one-of-a-kind. That’s the gamble I take going in and every time I go out. It’s definitely worth it”. Becca

Philip Lumbang’s humorous bears have become a frequent sight on the streets of LA; grinning back at passers-by and generating “good vibes” as is the intention the artist ‘sates’. Lumbang is heavily influenced by his childhood days of watching TV and illustrated cartoons, which now manifest through his art. The craftsmanship and subtlety of his style has garnered much attention amongst collectors and his peers.

“TV is like my homie. I loved cartoons; I still love watching cartoons to this day. I still buy toys. I’m just a big kid that really never grew up; just one who now has to pay bills.” Philip Lumbang

“Babes and Bears is a fusion of Becca’s whimsical style with Philip’s playful bears. We are elated that these two artists will be sharing the primary presentation space of LAB ART to create a burst of magic.” Rachel Joelson, Co-Founder LAB ART

OverUnder in Seattle: Peculiar Portraits & Mural for "Urban Artworks"
Reno averages 114 cloudy days per year.  Seattle is about twice that number. Can you blame Overunder for moving to Reno? Despite the endless days of gray, Seattle's pretty nice to live in, according t...
BSA Film Friday: 01.22.21
Our weekly focus on the moving image and art in the streets. And other oddities. Now screening:1. Dave Kim & Eric Burke in Alameda2. INDECLINE: "SIDE HUSTLES" Trailer3. The Greek Bar Jacke...
REKA Completes His Largest Mural in Paris 13
July always brings out massive public artworks in the northern hemisphere and this year you can add this one, his largest, by Australian street artist REKA in Paris  which he completed last week. Trac...
Faring Purth & Thievin’ Stephen Bed Stuy Collabo: “Cypress, Top Wrung”
The dynamics of collaborations between artists are often informative, even revelatory to the viewers as well as the artists. By deliberately casting your creative lot with that of another you are taki...
Cane Morto in Txakurrassic Park (Video & Poster) / Dispatch From Isolation # 46
The idea that the boys of Canemorto are in danger is both repelling and dinosaurian. But the paint-roller free thinking rapping brutalists of Italy are staying safe in quarantine, thank Dios. But...
Becca Brooklyn Street Art CA Lab Art Gallery Los Angeles Philip Lumbang