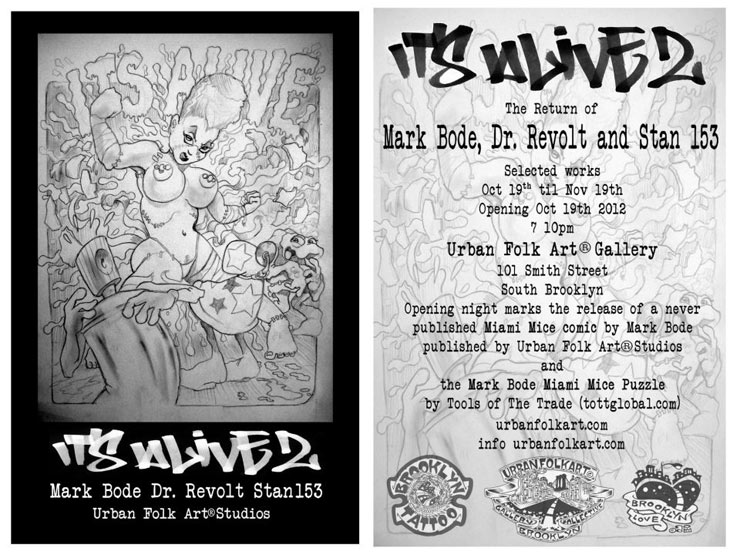 Urban Folk Art® Studios is proud to re- present the work of Mark Bode, Dr.Revolt, and Stan 153. The first ‘It’s Alive ‘ Show in March of 2010 was the 2nd gallery opening UFA® studios presented, and has stood as the most well received. The show will include new works from Dr. Revolt, Mark Bode, Stan 153. Lets recap if anyone hasn’t been doing their graffiti history homework, Dr Revolt is one of the founding members of The Rolling Thunder Writers (RTW) and is infamous for taking over the 1 subway line with his signature graffiti style (and creator of the ‘Yo MTV Raps’ logo). Stan 153, who got his start on the corner of 153rd Street and Eight Avenue defined the landscape of Harlem in the dawn of graffiti history, the 1970’s. He has been documented in The Faith of Graffiti by Norman Mailer. Mark Bode, son of the legendary comic book artist Vaughn Bode, has developed a worldwide following for taking his family legacy and applying it to the comic and tattoo industries, and has currently been showing art, painting murals (tributes to his own and his father’s notorious comic characters such as Cheech Wizard), and keeping his bloodline’s legacy alive worldwide.

The show opens Oct 19th and will be up Through Nov 19th. Urban Folk Art® Gallery is located at 101 Smith Street in South Brooklyn

Urban Folk Art® Gallery is the latest physical manifestation of Urban Folk Art® Studios. Founded in ’91, UFA® is an artist collective based out of South Brooklyn working in any mediums, avenues and aspects of creating art. The collective is a mutually supportive effort to expose artists of many disciplines and levels of experience including undiscovered, emerging and established. From painting, illustration, comic book art, Legendary graffiti art, photography and more, UFA® exhibits a wide variety of mediums.The merchandising aspect represents the continual branding of Brooklyn Tattoo®, the Urban Folk Art® t-shirt line, and other such merchandise created by the members of UFA, BKT2 and affordable art by all the artists who show in the gallery.
Urban Folk Art® Studios

Abandoned Graffiti-Covered New Jersey : NSFW
With New York’s hallowed graffiti hotspot 5 Pointz buffed and freshly hit up with GILF! and BAMN's yellow gentrification tape installation, we've been thinking about the disappearing quantity of ratty...
Vermibus x Moniker x BSA
In advance of Moniker in Brooklyn this May, we are interviewing some of the artists who are influenced both by street practice and fine art as the contemporary urban art category continues to evolve...
BSA Film Friday: 10.11.19
Our weekly focus on the moving image and art in the streets. And other oddities. Now screening : 1. Minda Hamada y Zosen Bandido in Veracruz2. Marina Zumi "Lucid Dreams II"3. Udatxo - Parees ...
BSA Images Of The Week: 05.17.20 / Dispatch From Isolation # 56
Times are tough but so are you. Such a New York sentiment and at the heart of it we believe in our fellow New Yorkers and people in general to pull through this series of cavalcading catastrop...
BSA Images Of The Week: 12.11.22
Welcome to BSA Images of the Week! Welcome to BSA Images of the Week. We begin with a series of shots from an outdoor exhibition on Governors Island right now. Timely, political, educational, ...
Brooklyn Brooklyn Street Art Dr. Revolt Mark Bode NYC Stan 153 Urban Folk Urban Folk Art Gallery