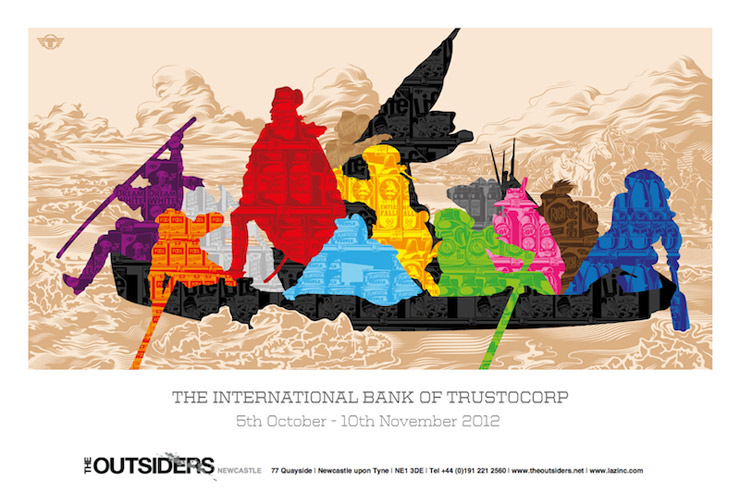 21st century iconoclasts Trustocorp make their debut outside of the USA at The Outsiders Newcastle gallery this autumn. International Bank of Trustocorp is a landmark interactive show will appeal to anyone interested in contemporary art and future politics.

A paradigm shift in protest art, Trustocorp use a visual language more commonly associated with mainstream media and big business to pursue an insurrectionary agenda. The collective has placed fake products in supermarkets, installed ersatz magazine covers on newsstands and placed subversive street signs across America.

Trustocorp eschew the hackneyed politics of the established left in favour of ‘post post-modern’ politics that preach self-reliance, self-worth. Their maniefesto especially rejects our fearful, material and hedonistic contemporary society perpetuated by a nanny state and alarmist media.

For ‘International Bank of Trustocorp’ the accomplished apostates will employ their high production values to transform the gallery into a counterfeit counting house that examines the power of currency.

“We’re exploring the power of money in our lives on a local and international level,” a Trustocorp spokesperson explains. “From the high power gambling of Wall Street to the broken dreams of ‘Main Street USA,’ money is simultaneously the root of all evil and the solution to all problems. This show is our take on the global effect of greed and the need for money.”

‘The International Bank Of TrustoCorp’ will be open to the public from 5th October – 10th November 2012, Tuesday to Saturday 12 – 6pm, admission is, as always, free.

Futura Goes "Full Frame" by Magda Danysz
One benefit of being ahead of your time is that you can paint your own rules, discover your own voice, set a standard. A drawback is that you may have to push forward on your own before you gain supp...
Unbridled Berlin Street Art : Spencer Elzey in Europe
Berliners are hard to crack, they say, but probably not for New Yorkers. We “get” them because of their no-nonsense frankness, sometimes sharp tongues, and because their "creative types" are unh...
Daze and BG183 at Welling Court 2020
Fun summer shots at Welling Court in Queens today as two big names from the New York graffiti scene, Daze and BG183 (TATS Cru) collaborated on a piece. The symbols they use meld together some of the ...
"Resistance is Female" Takes Over Phone Booths in New York
The decentralized Resistance, as it turns out, is a majority of Americans. And leading the charge are women and girls. So it makes perfect sense that a new grassroots takeover of telephone booth adv...
"The Nashville Walls Project 2017" Brings Jason Woodside and Ian Ross
"The Nashville Walls Project," a privately funded business improvement initiative in the downtown district referred to as “The Gulch” has already brought Street Artists like Rone, Above, Herakut, Curi...
Brooklyn Street Art Newcastle upon Tyne The Outsiders Trustocorp