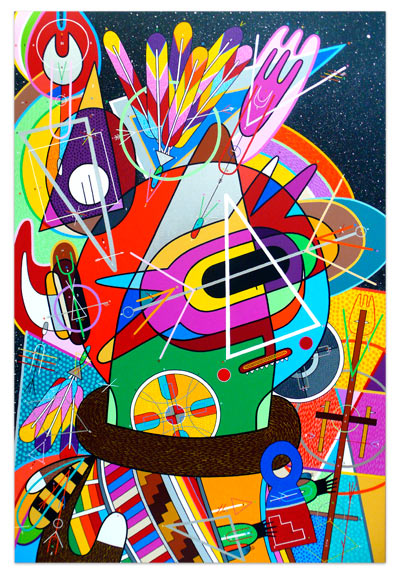 Sixeart (photo courtesy of the gallery)

Carmichael Gallery is pleased to present Disambiguation, a group exhibition featuring new works by Carlos Mare, Rae Martini, Remi/Rough and Sixeart. The exhibition will be on view in the Los Angeles gallery space from September 8 to October 6, 2012, with an opening reception on September 8 from 6-9pm.

The spirit of the street, the communities that are created and gathered therein, and the subsequent movements that are formed and fostered have assisted in setting the foundations for the work of the artists presented in Disambiguation. Years of experience sharing their vision in a public forum combined with daring experimentation in form and material has resulted in four exciting contemporary abstract interpretations of the traditional graffiti form.

New Yorker Carlos Mare captures the moving human form in both two and three-dimensional form. By applying his study of Modernist and Futurist masters Marcel Duchamp, Wilfredo Lam and Kazimir Malevich to his observations of the gestures and attitude of b-boy veterans such as Ken Swift, Mare has honed a practice that translates the patterns, rhythms and beats of dance and modernism into sculpture and drawing.

Italian painter Rae Martini is equally inspired by Futurism and its obsession with the machine. His formative past as a young graffiti artist translates into abstract works that emulate the grit and texture of the streets, often using fire and dirt to create the desired effect. The dual presence of intricately patterned layers and pure minimalism is achieved by a persistent process of adding to and substracting from the initial image, creating a surface reminiscent of a storied urban wall.

Attention to the formal elements of fine art, in particular that of Minimalism, is central to the work of Remi/Rough. His color palette is selected through deceptively simple arrangements of lines and angles that bring a variety of hues into unexpected encounters with each other. By working on canvas and sculpture, he transports the movement and style of train writing into the gallery space.

Sixeart’s mixture of psychedelic abstraction and comic book-inspired figuration has become an essential element of the urban fabric in his hometown of Barcelona. His work has a childlike innocence combined with an almost hallucinogenic sense of second sight. “Sinister tragicomedy with notes of psychopathology and touches of acid” is one definition the artist himself has offered of his unique style. “My own universe of characters comes from a happy childhood and a close contact with mother nature,” he explains. The dreamlike quality of his work shows an affinity with Surrealist artists such as Joan Miró, another native of Barcelona.
About the artists:

Carlos Mare was born in New York, NY in 1965. He was a notable member of the golden age of subway graffiti in the 1970s and 1980s, painting under the moniker “Mare”, an abbreviation for “Nightmare”. He wrote alongside many of the style masters of his generation, among them Kel First, Dondi White, Crash, Kase2 and Noc167. This experience, along with his interest in modernizing the graffiti art form, has led him to reinterpret the concepts and aesthetics of style writing. Recent exhibitions include Martha Cooper: Remix, a group exhibition at Carmichael Gallery in 2011, Art Is Study: 36 Years of Process and Practice at Pratt Gallery, New York City and Physical Graffiti: Art of the B-boy Dance at Skalitzers Contemporary Art, Berlin, both in 2012. Mare has also designed several awards, including the B-Boy SPY Award for the Rock Steady Crew, the 2005 and 2007 Red Beat Battle Awards, and the award for the annual BET/Black Entertainment Awards show.

Rae Martini was born in Milan in 1976. His first sketches at the age of 12 led to a career in street and train bombing that began in the late 80s and has lasted a dozen years. The development of both his graffiti and fine art is documented in 24 Carat Dirt, a 208 page hardcover book edited by Damiani and accompanied by a short film. The project was sponsored by clothing and lifestyle brand WeSC. Martini exhibited at the 54 Venice Biennale International Art Show Special Project, Pavilion Italy – Lombardia, Palazzo della Regione, Milan, Italy and participated with the Graffuturism group for In Situ during Art Basel Miami Beach, 2011. Additional  exhibitions have taken place at the Don Gallery, Milan, the Unruly Gallery, Amsterdam (2012), Castel Nuovo – Fondazione Valenzi, Naples (2010), Museum Recoleta, Buenos Aires (2008), Santa Maria della Scala Museum, Siena (2008), MAC – Contemporary Art Museum of San Paolo (2008) and PAC Museum – Contemporary Art Pavilion, Milan (2007).

Remi Morgan, alias Remi/Rough, was born in South London in 1971. Since his debut art show in 1989, he has gone on to exhibit in London, Paris, Perth, Tokyo, Santander, Los Angeles, Miami, San Francisco, Vancouver, Hong Kong, Berlin, Ibiza and more. Remi is a founding member of artist collective Agents of Change and took part in their award-winning Ghost Village Project in 2009. His work has appeared in the books Graffiti World, Abstract Graffiti and Untitled III. In 2008, Remi was invited to speak on the history of UK graffiti in front of a sell-out auditorium at the Tate Modern as part of the museum’s street art exhibition. The following year saw the publication of his first monograph, Lost Colours and Alibis, which he followed up with How to use colour & manipulate people in 2012.

Sergio Hidalgo, alias Sixeart, was born in Barcelona in 1975. Having painted from an early age, he has developed a highly personal visual language that comprises a host of recurring figures and animals. In addition to making sculpture, screen prints and works on canvas, he has collaborated with fashion designers to create clothing based on his distinctive style. In 2008, Sixeart was commissioned by the Tate Modern in London to paint a mural on the building’s iconic river façade alongside fellow artists Os Gemeos, Faile, Blu, Nunca, and JR. This was the first major public museum display of street art in London. Recent solo exhibitions have taken place at Alice Gallery, Brussels and N2 Galeria, Barcelona.

The Painted Buses of Raiatea and Bora Bora - French Polynesia
Box trucks are a favorite canvas for many graffiti writers in big cities and have become a right of passage for new artists who want the experience of painting on a smooth rectangular surface that bec...
GarGar Festival Penelles Mounts the Show Slow in 2021
It’s been a struggle to mount art events in the last year and a half for many reasons. That includes the 6th edition of GarGar Murals and Rural Art Festival in Penelles, Spain. Malpegados. GarGar...
Peek Inside Organized Chaos of CYRCLE
Beauty is something wonderful and strange that the artist fashions out of the chaos of the world in the torment of his soul. - William Somerset Maugham. Street Art collective CYRCLE couldn’t agree mo...
BSA Images Of The Week: 10.01.17
Clearly we cannot bury our heads in the sand anymore, for those of us who are tempted to. We try to make light of things here or at least add levity, but right now many of our community in NYC are...
BSA Images Of The Week: 01.24.16
Happy blizzard weekend New York! Who knew it would be so much fun to run free literally in the streets thanks to a travel ban on all non-emergency cars. It's a bit of genius really, because if you...
Brooklyn Street Art CA Carlos Mare Carmichael Gallery Culver City Rae Martini Remi/Rough Sixeart