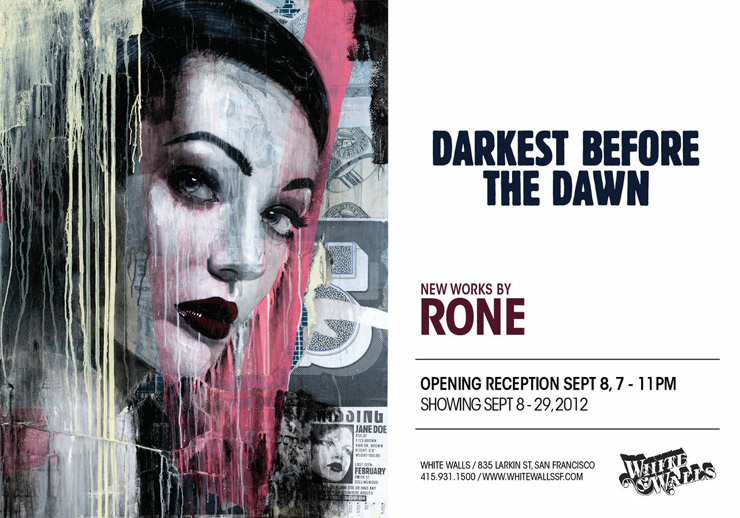 White Walls is pleased to present “Darkest Before the Dawn,” the first SF solo show of Melbourne-based artist Rone to follow his successful San Francisco debut in the “Young and Free” showcase of Australian street artists at 941 Geary in 2011. “Darkest Before the Dawn,” will feature works on canvas, brick, and paper, varying in size from 3’x2’ to large-scale works measuring over 6’x6’. The opening reception will be Saturday, September 8th, from 7-11pm, and the exhibition is free and open to the public for viewing through September 29th, 2012.

With the face of the same wide-eyed and sharp-featured woman starring in each portrait, Rone creates a modern legend. Separately, each piece is an autonomous work, existing through its own beauty, but when viewed together a narrative is opened, leaving us to wonder what led to the birth of this icon. In “Darkest Before the Dawn,” Rone tells us that his feature character stands as a symbol for the possibility of assimilating our worst moments into a new strength.

By incorporating a variety of techniques, Rone deliberately infuses each piece with the textures he readily encounters when working out in the streets. The build-up and deconstruction of multiple layers is a fluid, free flowing way of revealing a composition by letting it come about itself. The medley of patterns and textures embody the continuity of time passing, while the woman in the midst of it all personifies grace overcoming deterioration.

“We all have moments in our lives that make us who we are. These may be both tragedies and great moments that change the way we see the world. ‘Darkest Before the Dawn’ explores the concept of our darkest moments will eventually become our strengths, told through stylized portraits of a modern heroine.

I am trying to tell this story with the textures I see on the street, hand painted signage, torn bill posters and the deteriorating walls that look like they could tell their own stories. Using a palette of muted colours inspired by the fading colours I saw in Miami & Cuba, I am trying to create a sense of 80’s when style was all that mattered.”

Ein Wandblatt Aus Wien Issue #3: Erotik Edition
Who says zines died with the printing press? The Internet may have completely redefined how we communicate but the appetite for hand made independent publications has only strengthened in recent years...
Bloop Festival 2019/Ibiza Dispatch 1: Vlady Plays "Hopscotch" in the Sea
"Whenever, everywhere, anyway" "Hopscotch" Ibiza is that place where you appreciate beauty and youth and hedonistic forays into western values of free will and free love. Or at least that's what w...
BSA Images Of The Week: 11.13.22
Welcome to BSA Images of the Week! One of the hardest weeks of our lives. But we're still here to give you another posting of new shots of street art and graffiti on the streets. Thank you for...
Vandalizing Mario Testino in Berlin, at Helmut Newton Foundation
Now that we are closing the exhibition, how would you like to vandalize it? Mimi Scholz . Mario Testino "Undressed" Helmut Newton Foundation. Berlin. One Day Only Street Art Intervention curated by...
Saype Sprays Parliament Lawn in Belfast
Today we go to Belfast to see the latest installation of the “Beyond Walls” campaign of large-scale artworks by the French-Swiss street/land artist Saype, Saype. Beyond Walls Project. Parliament B...
Brooklyn Street Art CA RONE San Francisco White Walls Gallery