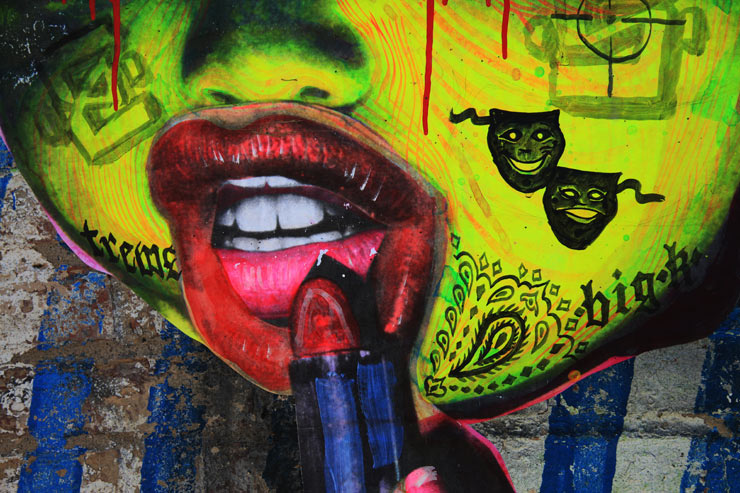 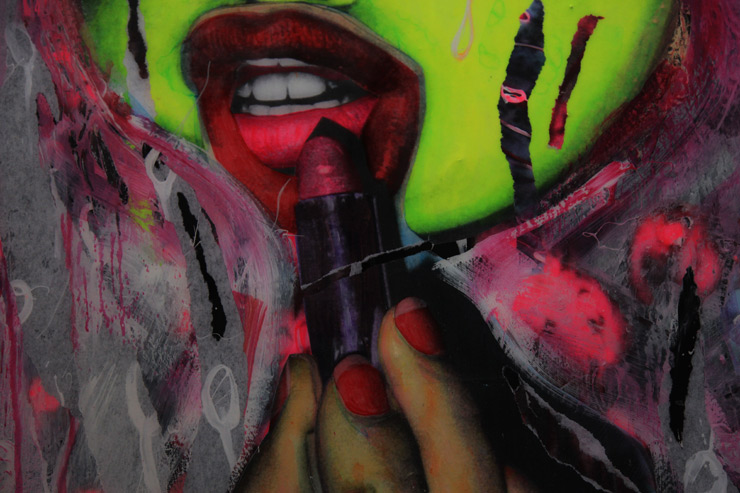 Thoughtfully arranged and stained fluorescent hues, the pretty collage chaos that is Judith Supine pops monstrously from these new canvasses. As he preps in studio for his solo at Jonathan Levine Gallery in Manhattan this week, the somewhat anti-social and highly admired Street Artist whose funhouse wheat-pastes twisted the sensibility of street art in the mid-2000s is now pouring a thick toxic gloss on what’s happening these days. “It’s really fucking boring. It just looks like shitty graphic design a lot of the time,” he says with a flippant derision that he almost pulls off.

The new huge gallery slabs here piled in the messy former living room facing the street are covered in an inch of drying clear resin, ensconcing the portraits, freezing them in place for decades, if not centuries. Despite the lickable and alluring effect of this material when finished, these fumes could kill him before he’s finished embalming the painted lips and bobbing heads. The last time he poured a batch of pieces like this he was preparing for a huge show in LA and the experience left him bleeding through his pores. 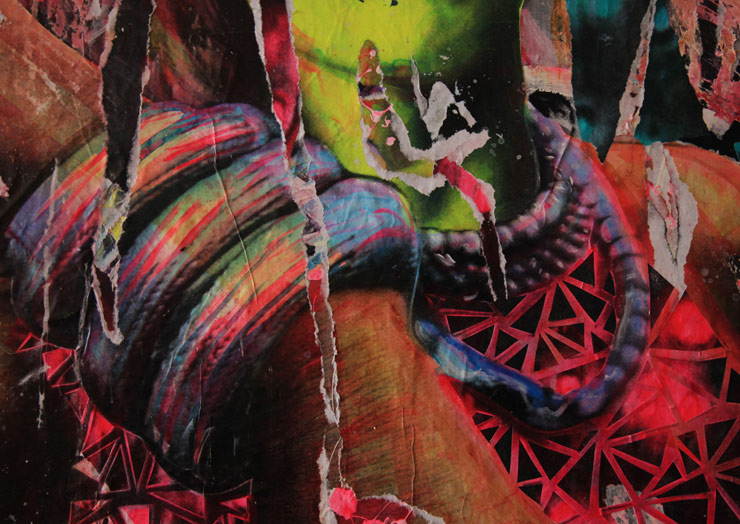 “I got really sick from it. It triggered an autoimmune disease and I was in and out of the hospital for three or four months. I got really sick from it…it made all my blood vessels explode but I kept using it and I was still doing drugs,” he remembers aloud as we sit on folding chairs atop a silver coated Brooklyn roof in the sun. The rotten experience left him weak and feeling like a punched out headlight but he hasn’t completely found a production solution and says it’s slightly stressful as we talk in the open air on the roof while his studio is a cloud of fumes below us. 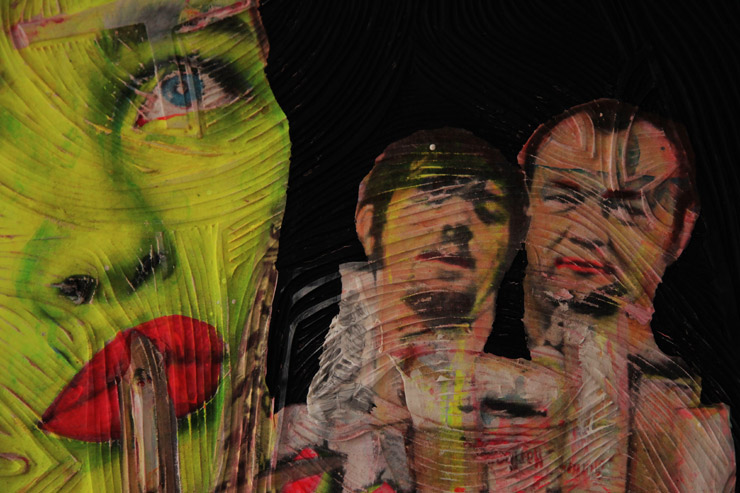 So it’s good to see new Judith, even if he’s not on the streets, and it’s brilliant to witness the sharp mind and hear the articulate and sometimes lacerating banter that has not been dulled by the addictive behaviors that he’s been working on.

BSA: Did it improve your art?
JS: Getting sick? No.
BSA: How about getting high?
JS: No. It just made me lazy and dysfunctional.
BSA: Yeah sometimes it makes you lethargic and apathetic. You don’t care.
JS: I mean drugs are, I don’t know, sometimes they are – there’s like a certain point where they could be inspiring, kind of help you relax.
BSA: Yeah
JS: Get in kind of a childlike state, right?
BSA: Loosen up your inhibitions
JS: Yeah, but I wasn’t good at doing that though, in a moderate way. So it’s not effective. It’s like you are just constantly fucked up all waking hours.
BSA: Well moderation is not a word I would normally associate with your work.
JS: Yeah, well I’m not into it so much, I’m not very good at that.
BSA: I mean it’s extreme, it’s pungent.
JS: But now I’m at the other end of the spectrum.
BSA: And how do you feel about that?
JS: I feel healthier, physically and psychologically.
BSA: That sounds good.
JS: Yes, so I’m gonna stick with it. 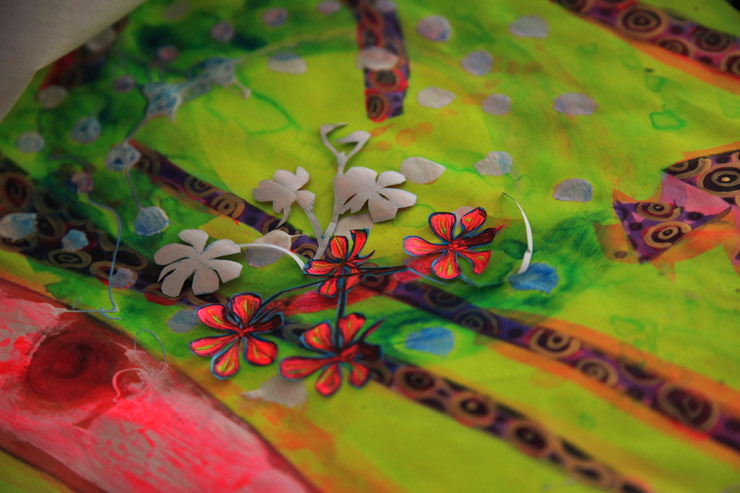 In fact Judith Supine has pulled off a pretty strong collection that he’ll be showing this week, and he credits the new sense of depth to the techniques he’s been teaching himself to build up his work. One piece even brought him back to his lino carving days that pre-date his collage work, but he’s unsure of showing that one.

BSA: What inspired you to do these pieces for the show?
JS: Money. Actually it is getting more exciting – especially making these pieces I’ve been getting more excited about the idea of working back into something?
BSA: When you say “working back into” the painting…?
JS: Like I probably repainted each painting three or four times. I pull the image out and repaint the same image.
BSA: Put it back in, draw out certain aspects of it..
JS: Yeah,
BSA: So how much time would lapse between iterations?
JS: A few hours. It’s pretty immediate the way I’m using multiples and xerox machines and shit. I can have lots of stuff painted to draw from.

BSA: Do you get the room ready first and then begin, or do you discover en route that you needed more stuff?
JS: It’s all pretty haphazard. I’m not like … I make a small-scale collage. That’s what I enjoy making – the actual collage – those tiny collages from books and magazines. To me that’s the most enjoyable part and creative part. And that’s become a kind of compulsive behavior. It’s something I do every day and I’ve done every day for the last 10 years. And then, from those I’ll edit out and I’ll pick one out of 20 of them or 30 of them to make into a painting. And then half the time I don’t like it when I start painting and I just abandon it.

BSA: So it’s like the thrill of that initial creative process …
JS: Yeah it’s like sifting through all these images and kind of finding these other hidden images – that part is really interesting and exciting to me. I’m trying to figure out ways to make the other end of the process, the actual painting part, more interesting to me where I’m like building up more layers of the resin and doing more like hand-painted shit so it’s not like “paint by numbers” – it’s boring. 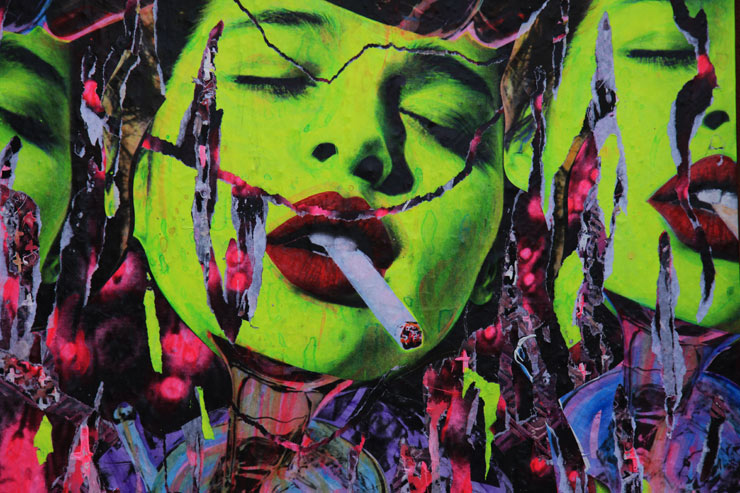 So that’s it. No more work in the public sphere from Judith Supine, right? Not quite.

If he’s not into the Street Art scene that flourishes, at least in part, in his wake these days, it doesn’t look like he is completely out of it either, at least not just yet. While the thought of wheat pasting seems boring and uninspired and he has harsh words to describe the current scene, and the rise of organized “Street Art” events in cities around the world leave him feeling cold, he might just conjure up a new idea for sculpture one of these days.

BSA: So, you wouldn’t want to associate yourself with shitty graphic design and a bunch of derivative stuff?
JS: (laughing) What I like about Street Art is the feeling of the transgressive part of it and the illegal nature of it. That’s what’s exciting to me about it. You know, what qualifies as street art now is like legal murals and that shit just seems kind of boring to me. It’s kind of just like in the style of… it just kind of loses its power.

BSA: Well, that’s because it’s art whose installation has been approved. There’s no risk involved, it isn’t transgressive. You’re not breaking any rules.
JS: Not that there’s really a lot of risk involved anyway. It’s like fucking jaywalking, or something. You know, or maybe more. I mean on a daily basis, especially while using drugs, I was breaking more laws doing other shit that I could get in a lot more trouble for. It’s really not a big deal. It’s fucking slap on the wrist.

BSA: Some people have said that they’ve had really bad experiences when they’ve been arrested.
JS: Yeah, I don’t know. I’m still interested in doing things out doors. I guess it still needs to be illegal for me, for it to be fun.
BSA: To get you hard.
JS: Yeah, and I don’t have very much interest in putting up wheat pastes and posters – so maybe more site-specific sculptures – it’s kind of more interesting to me, more exciting. I’m more like excited about how to like plan something and get away with it than, a lot of times, the actual final result.
BSA: So it’s like the process of the heist. Planning the logistics, executing the plan..
JS: Yeah, that part is intriguing to me. It’s not anything really exciting about walking around fucking gluing some Xerox to the wall. It’s pretty simple to do it and not get caught.
BSA: I wonder if there is an age element involved with the “fun-ness” of this?
JS: Probably. I don’t know what I want to do. I’d probably like to stay home and fucking read a book. 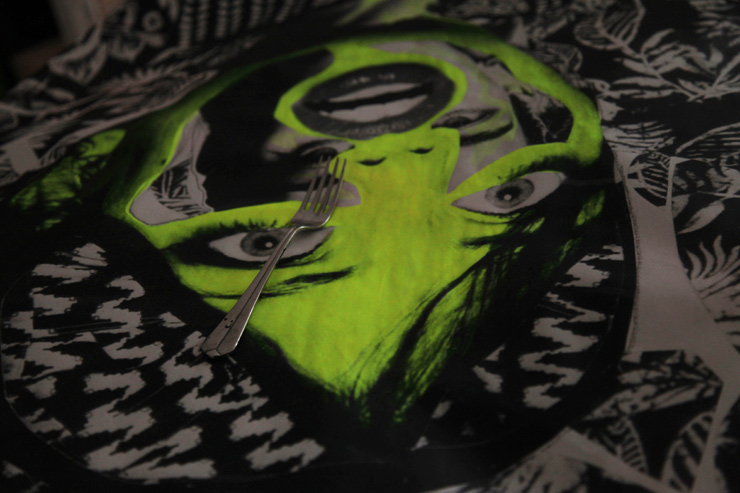 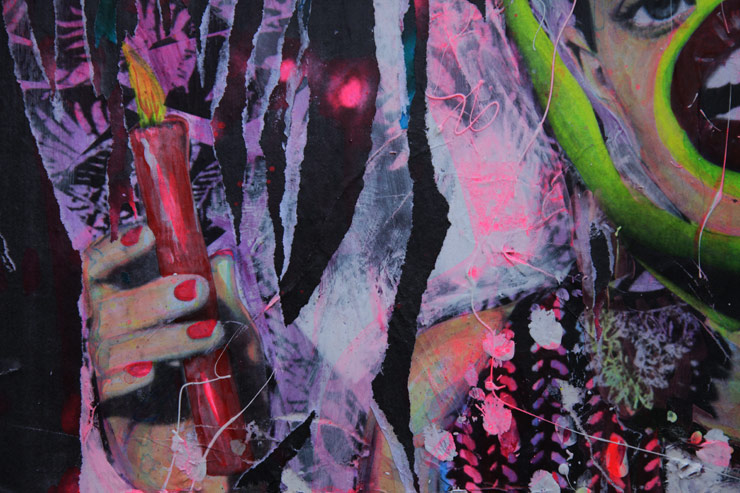 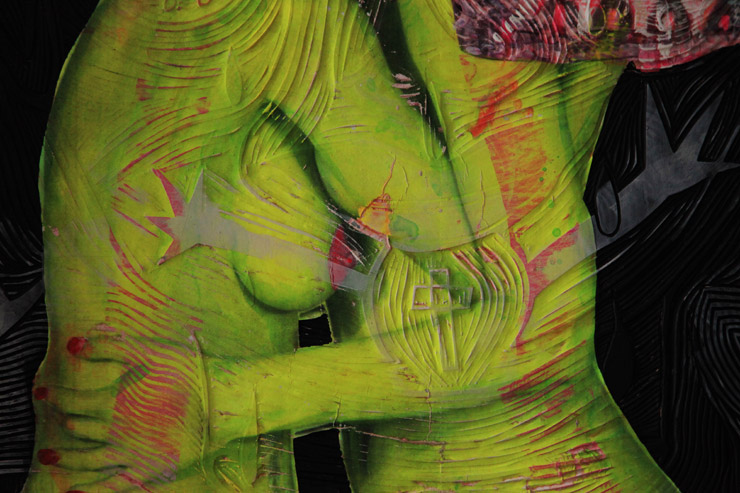 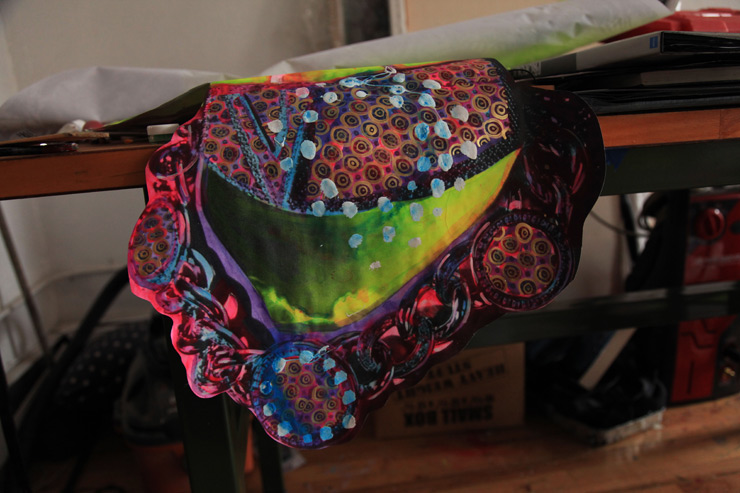 Judith Supine. Studio shot with a detail of a piece in progress. (photo © Jaime Rojo) 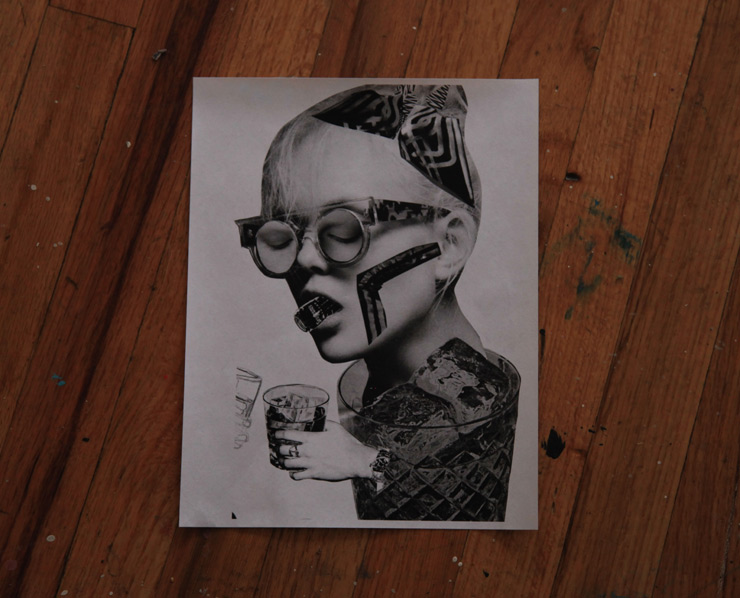 Judith Supine. A sketch/study for a piece. (photo © Jaime Rojo)

Judith Supine’s solo exhibition “Too Much For One Man” opens this Saturday, Sept 08 at the Jonathan Levine Gallery. Click here for more details on this show.

Rough.eq Creates Miniature Refugee Boats in Basel, Switzerland
As much of Europe is actually the recipient of refugees arriving in boats from war-torn countries, this image of a small boat filled past its capacity with people has a lot of relevance to people in B...
BSA Images Of The Week: 02.12.17
"It's surreal to be on the south side of the US border," we said last week about being in Mexico. Sorry to report that it may be even more surreal on this side. Trump and Co. suffered a setback o...
BSA Images Of The Week: 06.29.14
Here's our weekly interview with the street, this week featuring Alice Pasquini, Boy Kong, El Topo, Flood, Foxx Face, GSC, Kaffeine, Li-Hil, LMNOPI, Myth, NTC Cru, Olek, Ozmo, Texas, Gane, TV Wi...
Tina Ziegler Brings Moniker to Brooklyn (Interview)
BSA is welcoming a number of friends and honored peers to Brooklyn this May as a full circle event takes place in Greenpoint on the East River; the Moniker Art Fair. Our original romance with ...
Rocking "THE HAUS" : A 5-Floor Berlin Bank is Transformed by Artists
“Normally we paint advertising – hand-painted advertising, mostly with cans. So we work all over Germany, with a lot of crews, “ says Kimo, a bearded, bald energetic and sharp witted guy who is lighti...
Brooklyn Street Art Jaime Rojo Jonathan Levine Gallery Judith Supine Manhattan NYC Steven P. Harrington