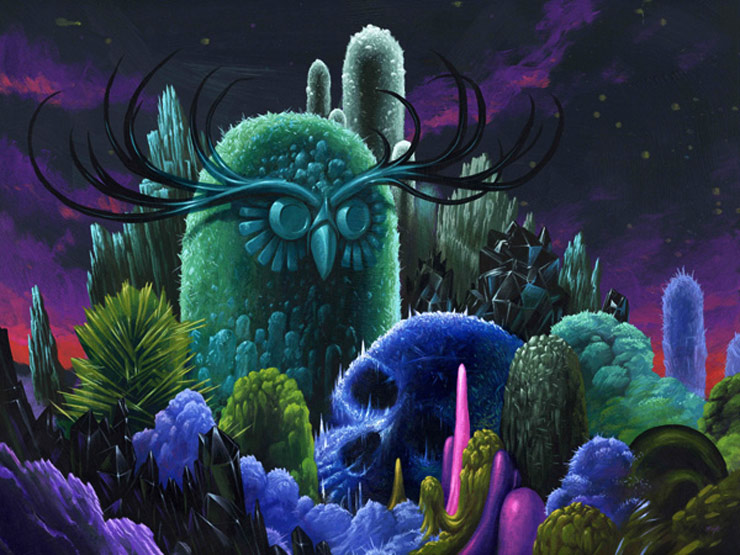 September 8—October 6, 2012
Opening Reception:
Saturday, September 8, 7—9pm
Jonathan LeVine Gallery is pleased to announce Decay and Overgrowth, a series of new works by Southern California-based artist Jeff Soto, in what will be his fourth solo exhibition at the gallery.

Expanding upon the themes explored previously in Lifecycle, Soto’s solo 2010 exhibition, works in Decay and Overgrowth deal with the passage of time, early man and life after death, as well as primitive myths and legends attempting to explain the unknown.

Two of Soto’s grandparents passed away within the last year, prompting the artist to research how different cultures explain life and death. Attempting to celebrate their lives rather than mourn their deaths, he has been working these ideas into his paintings. A connective thread of mortality runs throughout the work, conveying themes such as the transient nature of life, brevity of the average lifetime and inevitability of death.

Soto selected symbols of hope and growth to symbolize the cycle of life, death and rebirth. Organic shapes and elements such as mountains, plants, flowers, rocks and crystals are juxtaposed with manmade objects such as cell phone towers, weapons, polished gems and modern architecture. The resulting imagery combines a bit of magic, unanswered questions and a glimpse into the unknown.

In the words of the artist: “I’ve been thinking more than ever about how our lives are short, fleeting and unexpected. I’ve been researching man’s migration across the planet, our domestication of plants and animals and the slow evolution of different cultures. I find it interesting that each generation adds their own small part to our collective human experience. I’m continually fascinated by mankind’s relationship to nature and how humans have been bending the environment in good and bad ways for tens of thousands of years.”

ABOUT THE ARTIST
Jeff Soto was born and raised in Southern California, where he currently resides with his wife and daughters. In 2002, he graduated with Distinction from Art Center College of Design in Pasadena, California. Soto’s distinct color palette, subject matter and technique resonate with a growing audience: inspired by childhood toys, skateboarding, graffiti, hip-hop and popular culture. His bold, representational work is simultaneously accessible and stimulating. Soto has been featured in numerous publications and published two monographs: Potato Stamp Dreams in 2005 and Storm Clouds in 2008. In 2008, his work was the subject of an exhibition at Riverside Art Museum in Riverside, California. He has painted multiple large-scale public murals in addition to exhibiting his artwork in galleries and museums around the world.

Irene Valiente at Contorno Urbano 12 + 1 in Sant Feliu de Llobregat
VALIENTE CREATIONS launches the 12+1 project in Sant Feliu - Proyect 12+1, urban art in Sant Feliu de Llobregat, Barcelona, Spain A teacher of drawing from Barcelona, Irene Valiente loves...
What's on the Street in Madrid? A Quick Survey
Today we have an opportunity to see some of the Street Art and gallery-related works on show in Madrid. Our sincere thanks to photographer and avid observer Fer Alcalá, who shares his findings with BS...
Photos Of BSA 2021: #5: Artists and the Christ Complex
We’re celebrating the end of one year and the beginning of the next by thanking BSA Readers, Friends, and Family for your support in 2021. We have selected some of our favorite shots from the yea...
STRAAT Museum of Amsterdam Sails with Maiden Exhibition Catalogue
In a space massive enough for a Dutch sea vessel, the Street Art Museum of Amsterdam (STRAAT) has one of the largest collections of today’s mural stars anywhere. During its official maiden voyage, cu...
Tell It to The Judge ; Graffiti Artists Win in 5 Pointz Case
In a ruling that many graffiti and Street Artists interpret as a validation of their artwork and which may spawn further legal claims by artists in the future, Brooklyn Judge Frederic Block, a United ...
Brooklyn Street Art Jeff Soto Jonathan Levine Gallery Manhattan NYC