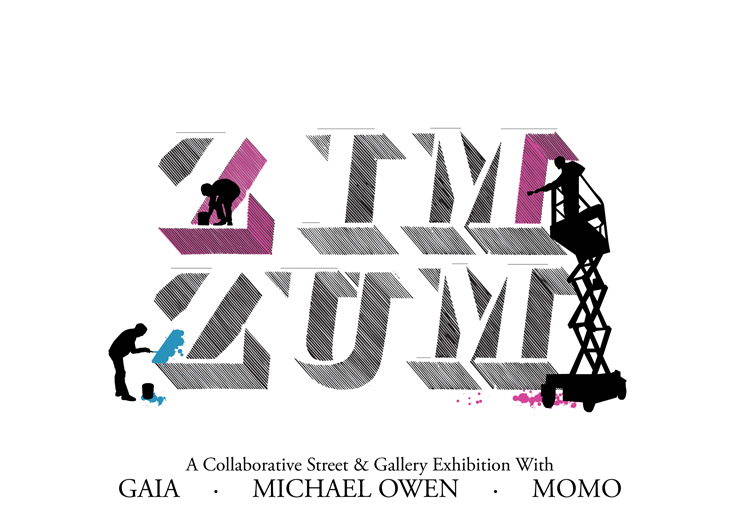 ZimZum turns street art on its head with a first-­‐time collaboration between renowned artists Michael Owen, Gaia, and MOMO, by merging the work of multiple street artists into one unified piece that subsumes the individual styles of the artists into a new, singular voice. Such an intertwined, profound collaboration is rarely done in the street art world, where maintaining one’s unique imprint is at the essence of the genre.

The colossal work will fill the Main Gallery and spill onto the street, thereby pushing street art and the artists in a second way. The work must resonate with two radically different audiences simultaneously: the gallery world and the pedestrian consumer of street art, the casual passer-­‐by. ZimZum is the kabbalistic idea that the creation of the universe was caused by God breathing in then out.

With large wheat paste line drawings of animals and historic figures referencing urban development, Gaia has burst into public view since 2009, exhibiting internationally from New York to Seoul, and Los Angeles to Amsterdam. Michael Owen is known as the artist behind the Baltimore Love Project, a planned series of 20 murals across Baltimore with silhouetted hands spelling the word “Love.” He’s also a Resident Artist at the Creative Alliance and has completed numerous public and private commissions, including one of the world’s longest murals in the underpass near the Baltimore neighborhood of Highlandtown. MOMO garnered early notice for “the world’s largest tag,” an innocuous, wobbly, 8-­‐mile line of orange paint, spelling his name across the streets of Manhattan. He has since emerged as a leading presence internationally, with beautiful, site-­‐sensitive, geometric-­‐abstract murals pushing both abstraction and street art in new directions.

Following the opening, stay for the Sweatboxx Dance Party, from the producers of the successful FUSION series, paying tribute to the Baltimore club scene. We dare you to dance ALL NIGHT LONG! Two DJs, Booman (B-­‐More) and Jav (Chocolate City), bring you the best of Baltimore Club and classic Hip Hop in one night. DJ Booman Is well known for his Doo Dew Kidz classics like “Watch Out For The Big Girl.” He’s engineered remixes for Usher, Katy Perry and Michael Jackson. DJ Jav (Javier Velasco) is a regular on WPFW’s “Decipher” Hip Hop Show.

Canemorto & Angelino Release "Golden Age"
Not quite Domingo, Carreras, and Pavarotti but it’s still an historic achievement in the field of music. The inimitable trio of lively street canines known as Canemorto (dead dog) have just dropped a ...
Gaia, Oranges, and Honoring Immigrant Lue Gim Gong in Massachusetts
Lue Gim Gong is looking one way; a kid is looking the other. The Chinese immigrant came to California as a preteen later here in North Adams, Massachusetts, and worked as a laborer. Eventually, he de...
Icy & Sot and a Man of Trash in Tbilisi, Georgia
15 centuries old, Tbilisi may not last as long as this garbage man sculpture by Street Artists Icy & Sot. Icy & Sot.  "Human reflection on nature". Tbilisi, Georgia. May 2017. (photo ...
BSA Images of The Week: 06.20.21
Welcome to BSA Images of the Week! Today is PRIDE DAY in NYC and Father's Day in many parts of the world. Congratulations to us all, queer and/or fathers. We're happy to show you what we've been ...
Everyday Healing Part 2: "Working With Trauma". A Zine By Jessi Rado from Swoon
“When I first read Jessi's zine I cried the kind of tears you cry when you feel seen and known in a loving way,” says New York street artist Swoon, who has made her own recovery from childhood trauma...
Baltimore Brooklyn Street Art Creative Alliance Gaia Maryland Michael Owen Momo