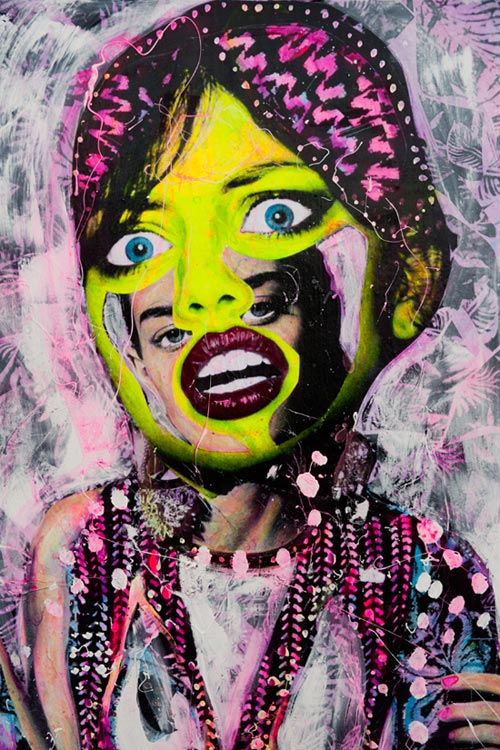 Judith Supine
Too Much For One Man
Solo Exhibition

September 8—October 6, 2012
Opening Reception:
Saturday, September 8, 7—9pm
Jonathan LeVine Gallery is pleased to present Too Much For One Man, a series of new oil paintings on panel by acclaimed Brooklyn-based artist Judith Supine, in what will be his first solo exhibition at the gallery.

Using his mother’s maiden name as an alias to keep his identity anonymous, Judith Supine has become renowned in the street art scene for his distinct style, unique wheatpastes on building façades and impressive placement of public interventions in daring locations throughout New York City. In 2007, he hung a 50-foot figure off the side of the Manhattan Bridge, in 2008 he left a piece floating in the East River and then in 2009 he left one in a Central Park pond, one in a Queens sewer and another on the highest point of the Williamsburg Bridge.

In recent years, Supine has focused more on studio work and elaborate gallery installations. His process involves a pastiche of printed ephemera. Supine describes the collage technique as “combining seemingly disparate images to reveal something that wasn’t previously apparent.” Procuring visuals from found materials such as salvaged books and magazines to form his inventive assemblage, the artist uses a photocopier to create figures with odd proportions and dramatic scale in high-contrast black and white. He then applies vibrant washes of his signature color palette in psychedelic fluorescents (mainly neon greens, pinks and purples) before finishing with a seal of high-gloss resin.

There is a poignant quality to Supine’s surreal subject matter, likely the result of his effective skill in manipulating and combining image fragments—altering them so far beyond their original intention that they transform completely. These visual contrasts highlight class issues, twisted ideals and culture clashes. Supine turns airbrushed fashion and cosmetic beauties into monstrous creatures. Subverting sexy into scary, innocent into depraved and privileged into pornographic, children’s faces are superimposed onto adult nude bodies as luxury brand supermodels merge with the world’s impoverished. Supine’s work exposes the grotesque vulgarity of its advertising sources yet also manages to touch upon core truths of humanity, posing profound questions that resonate.

ABOUT THE ARTIST
Judith Supine was born in Portsmouth, Virginia, in 1978. He did not speak until he was seventeen years of age, during which time he used drawing and collage as a form of communication. The artist spent years traveling throughout European cities including London and Amsterdam. In 2005, he moved to Brooklyn, New York, where he is currently based. Supine’s work has been featured in numerous publications, including books such as: DELUSIONAL: The Story of the Jonathan LeVine Gallery, published by Gingko Press in 2012, TRESSPASS: A History of Uncommissioned Urban Art, published by Taschen in 2010,  Beyond The Street: The 100 Leading Figures in Urban Art, published by Gestalten in 2010 and Street Art New York published by Prestel in 2010.

BSA Images Of The Week: 11.21.21
Welcome to BSA Images of the Week! Coming up Thursday is Thanksgiving. What are you thankful for? We're thankful for you and the indomitable spirit of New York. It looks like many New Yorkers...
BSA Film Friday 09.20.19
Our weekly focus on the moving image and art in the streets. And other oddities. Now screening : 1. "REWILD" from Escif2. Guido van Helten in Faulkton, South Dakota by Brian Siskind3. How Art...
Photos Of BSA 2021: #13: Waving the White Face Mask Flag
We’re celebrating the end of one year and the beginning of the next by thanking BSA Readers, Friends, and Family for your support in 2021. We have selected some of our favorite shots from the yea...
Dot Dot Dot Creates 'Analogram' as a Concrete Status Update in Norway
Some walls just lend themselves perfectly to a piece, don’t they? This arching-forward piece reminded Oslo-based DOT DOT DOT of the bending of a filmstrip and called to mind the continuous updating o...
Biancoshock Shot: Making Cameras in Lodi, IT
The Italian street art interventionist named Fra. Biancoshock loves to reinvent space – especially public space. Biancoshock. "Cannot - 2022". Lodi, Italy. (photo © Biancoshock) Always on the l...
Brooklyn Street Art Jonathan Levine Gallery Judith Supine Manhattan NYC