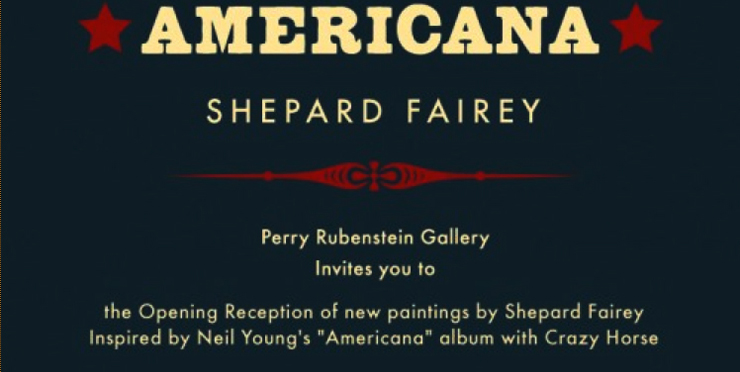 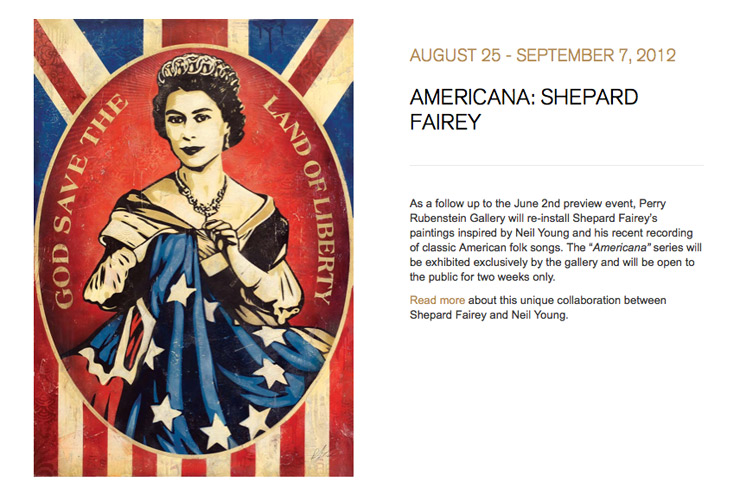 Perry Rubenstein Gallery (LA) presents a special project by Shepard Fairey and Neil Young in celebration of the recent release of Young’s new album with Crazy Horse, “Americana,” which features reinterpreted classic, American, folk songs. Fairey has created eleven new paintings, each one inspired by the songs, such as Oh Susannah, This Land Is Your Land and Clementine. The new Shepard Fairey paintings will be on view to the public at Perry Rubenstein Gallery in Los Angeles starting August 25th. In addition, Shepard will have a limited quantity release of the Americana Print Edition Box Set at the opening on August 25th at Perry Rubenstein Gallery. The Box Set will include a collection of screen print versions of all the new paintings, more info and official release date on the prints to come shortly, so STAY TUNED!

The “Americana” project developed as a result of Shepard Fairey’s relationship with Neil Young and his long-time manager Elliot Roberts. Fairey created a portrait of Young for the artist’s May Day show in 2010, based on his view of the musician as a social commentator philosophically aligned with people like Woody Guthrie, Bob Dylan, Johnny Cash, and Joe Strummer. Young and Roberts then asked Fairey to design the art, CD and DVD packaging for the 25th anniversary of Young’s Bridge School charity. Fairey states, “Neil really liked the art and I was thrilled he asked me to collaborate by making paintings inspired by the songs on his “Americana” album. I’m a huge fan of Neil’s music in general, but when I heard the album I realized how much the subject matter of several songs reflected the aspirations and tragedies of those pursuing the American dream tied into issues relevant to the 99% movement which I have been supporting.”

Fairey says he listened to the music and lyrics to come up with concepts for visual representations of the songs. Then for each song, Fairey presented Young with ideas about a visual image that would best capture the meaning and/or protagonist/s in each song. The artist enjoyed hearing how Neil interpreted aspects of the songs that moved him the most musically and lyrically. Fairey states, “I showed Neil sketches, and then we discussed the ideas and refined them. He was very open to my ideas and encouraged me to go with what inspired me the most. Latitude for interpretation is something that Neil utilizes and seems to value as an important way for the listener/viewer to personalize their interaction with art and music. I also was excited about this project because the concept of re-interpreting pre-existing songs filtered through Neil’s unique sensibility parallels what I have often tried to do as a visual artist by building upon iconic images that are an accessible part of the cultural dialogue.”

Each of the new Fairey paintings resonate powerful messages presented in the songs, some depicting a hopeful outlook on the pursuit of a better tomorrow, while others reflect the hardships that come in trying to achieve that dream. One painting related to Clementine, which captures the words of a mourning lover whose “darling,” the daughter of a California Gold Rush miner, drowned. Here she is represented by the levitating body of a young woman draped in white, with the text “And Gone.” Another painting is related to the 1848 minstrel song Oh Susannah that features a dungaree-wearing banjo player with the text “DON’T YOU CRY FOR ME.” Other works feature a wanted poster (Travel On); an iconic image of Queen Elizabeth embroidering an American flag (God Save the Queen); and, a lonely tree, stripped bare of its leaves, in a desolate landscape (Tom Dula).

For Young and Crazy Horse’s rendition of the famous 1940 Woody Guthrie song known to every school-aged child in America, This Land Is Your Land, written in response to Irving Berlin’s God Bless America, Fairey has depicted the hopeful face of a youth, set against a dramatic Western Landscape. Three rows of sharp, barbed wire cross the boy’s path with the text “NO TRESSPASSING / THIS LAND IS MY LAND.” The text is derived from a variant verse Guthrie added as a social commentary during a 1944 recording session. Fairey’s paintings are mixed media on canvas, including techniques such as stenciling, collage, and screen-printing. All of the paintings measure closely to the 30 x 44 inch dimension, which is one of Fairey’s standard choices of size. “Americana” is Neil Young with Crazy Horse’s first album together in nine years and is being released on June 5 on Reprise Records.

Stickers: One Quick Slap And You Are Done!
We remember walking down the street somewhere in Los Angeles with Shepard Fairey and a gaggle of other artists after a panel discussion we led at LA MOCA back in the day…Shepard was enthusiastically ...
Borondo and His Collection of "Memento Mori" (Book)
Memento Mori, the collection of images and essays about the youthful Borondo is as much a reflection of the artist as it is his art and his process. Canvas bound with partial hardcover, it is unpreten...
BSA Film Friday 12.11.2020
Our weekly focus on the moving image and art in the streets. And other oddities. Now screening : 1. "About William Lanson" - David de la Mano in Connecticut2. Orestis Pangalos: Greek Graffiti...
The Painted Buses of Raiatea and Bora Bora - French Polynesia
Box trucks are a favorite canvas for many graffiti writers in big cities and have become a right of passage for new artists who want the experience of painting on a smooth rectangular surface that bec...
disCONNECT / Alex Fakso / Between The Collective And The Individual.
The marauding crowd, faceless and multi-podel, rumbling with half ideas and mislead missions. If you have lived in cities you know the feeling of being swept along inside one as it hurtles down the s...
Brooklyn Street Art CA Los Angeles Neil Young Perry Rubenstein Gallery Shepard Fairey