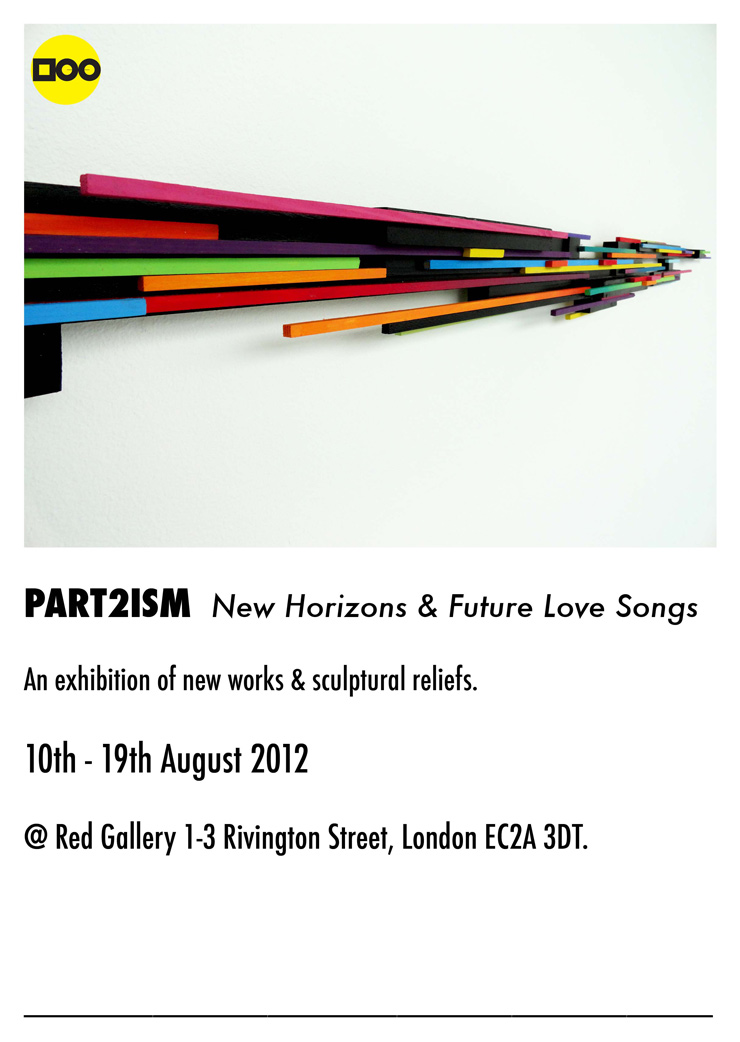 Red Gallery proudly present Part2ism’s first solo exhibition in London since Artillery for Pleasure 2009. This new body of work is perhaps his most outlandish work in a quartz-century journey using aerosol and a vast range of different media. New Horizons and Future Love Songs explores the relationship of sight and sound as one medium. In his series of polychromatic sculptural reliefs entitled ‘Architect-sonics’, wooden planes of color appear to slice through time placing our idea of transit art in another realm. Further works on show investigate aerosol paint as a raw medium exploring vectors as pure line and color but also the use of spatialization and surface data to interpret visual noise over large sheets of canvas. An exhibition that strips away the non essential elements and at the same time takes fundamental ideas to the absolute pinnacle.
“A syncretist at heart and now a synaesthesiac in practice, Part2ism is a multi-talented creator, exploring where his interests and instincts lead him. Beyond all the “isms’ that can be applied to his work over the past twenty eight years, whether of his own invention or culled from art history, Part2ism has always aligned himself with his own visions first. As an artist, he subsumes all categories and at the same time defies them. More importantly than these post-creation categories that can be applied to his body of work, the underlying and unifying threads in Part2ism’s history are DIY individualism, a revolutionary mentality and a consistent exploration of mind-challenging aesthetics. His timbre, his voice, his style is a constantly mutating, gene-splicing hybridism embodying rebellion and progression.
With this cross pollination throughout the full spectrum of his creative output, Part2ism has reached an apex of compression and connection of his lifetime of aesthetic explorations in different disciplines, utilizing everything that he has accomplished over the past twenty-eight years, in a sensurround of synaesthesia and synchronicity”. Daniel Feral

Images Of The Week: 05.11.14
Happy Mothers Day to all the moms, mommies, mama, mas, mutters, madres, and variations on loving female caregivers out there. Thank you sincerely from the bottom of our hearts. Been a huge week...
Specter Shows Versatility in His Approach to the Street
Specter's Ad Takeovers Signal a New Direction Toward Photography and Abstraction, for now A curator at a major American museum told us this weekend that he’s discovered there are two major categories...
BSA Images Of The Week: 09.15.19
Did you see that micro-moon on Friday the 13th? We were up on the roof with artists and friends and weirdos celebrating "mid autumn moon" and looking at the New York skyline and that beautiful mo...
Hot Tea: An Undulating Fluorescent Apparition Takes You To Church
A fluorescent underwater sea creature is flobbing it’s tentacles in the ripply and unusual directions of the currents and cross currents, full of life and full of crazy ideas. This particular one is h...
California's Augustine Kofie is in a New York "State of Mind" at Hashimoto
It really is primarily about your State of Mind, says LA-based painter Augustine Kofie about his battle with art and quarantine during this last year. Augustine Kofie. "Disbelief System". Hashimot...
Brooklyn Street Art London Part2ism Red Gallery U.K.