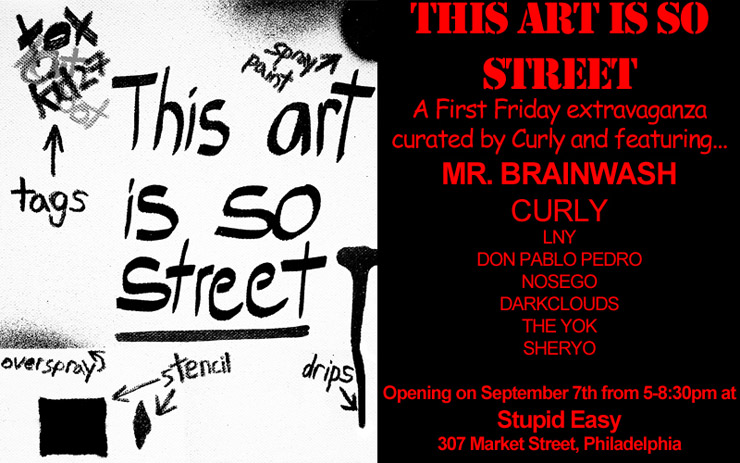 This Art is so Street brings the work of eight of the world’s top street artists together for the first time under one roof. For some of these new contemporary masters, it will be their first time exhibiting in Philadelphia. In addition to Curly’s own paintings, there will be never-before-exhibited artwork by Mr. Brainwash, LNY, NoseGo, Don Pablo Pedro, Darkclouds, The Yok and Sheryo. The international lineup represents street artists from around the globe, including Philadelphia’s very own NoseGo and France’s favorite-son Mr. Brainwash, who also starred in Banksy’s film Exiting Through the Gift Shop

When Stupid Easy Gallery owner Thomas Buildmore offered Curly a solo show at the gallery, he turned it down in an effort to help out his fellow street artists. Instead, Curly decided to curate This Art is so Street and show the work of other great street artists by curating the best group show of street artists to have ever been seen in a gallery.

The reclusive and anonymous Curly has this to say about the show: “When Buildmore approached me about showing at Stupid Easy, I thought it was beneath me. After all, I can just sell my work privately directly to clients. Then I realized that there are a lot of street artists out there who don’t have that privilege and intricate understanding of the art market. So I figured that it was time to enter the gallery world, if only to shepherd along a few of my friends. This Art is so Street is, without a doubt, the best show I could have possibly put together. You will be blown away and buy things, lots of things.”

Thomas Buildmore says, “I could not be more excited about This Art is so Street. Putting together a group show of artists who do street art was a brilliant idea. Street art, or urban art as some prefer to call it, is the most important art movement since cubism, and the artists in This Art is so Street are at the forefront of the movement. Curly is a genius in both art making and curating.”

This Art is so Street opens September 7th with a private view from 5pm to 8:30pm and runs through September 30th. Stupid Easy Gallery is located at 307 Market Street, Philadelphia PA, 19106 and is open by appointment (email stupideasyideas@gmail.com).

For more information on This Art is so Street or to arrange an email-interview with Curly, please contact Laurence Feinberg at laurencefeinberg@gmail.com.

After years of dabbling in street art, Curly got serious in late 2010 and began a mission to saturate the streets of Philadelphia with his stickers. Since then, thousands of unique handmade Curly stickers have wound up on newspaper bins and signposts around Philadelphia and other cities around the world. Thanks to his winning combination of humor and style, Curly considers himself to be the world’s greatest living street artist. In 2012, he even branched out to digital art,

Saner, Mexican Muralist and Painter, Studio Visit. BSA X UN X Mexico City: Day 2
This week BSA is in Mexico City in collaboration with Urban Nation Museum of Urban Contemporary Art (UN) to see what is steering the scene on the street, meet artists, visit artist compounds, muse...
Project M/5 Curated by Roland Henry & VNA in Berlin
The Berlin adventure entitled Urban Nation is readying for substantial renovation over the next year and meanwhile has embarked on rotating external exhibition of artists from many disciplines called ...
BSA Film Friday: 09.18.15
Our weekly focus on the moving image and art in the streets. And other oddities. Now screening : 1. Petro Wodkins makes Putin Sing and Explode: Sound Of Power 2. PangeaSeed's Sea Walls....
Martyn Reed: Art Saves Lives
The Founder of Nuart, Nordic Jewel of Street Art The small but very expensive (if you are not a resident) and oil rich Coastal town of Stavenger in Norway must be feeling a bit blue right now. Nuar...
Images of The Week: 03.09.14
Hi Everybody! Two things - We saw a big uptick in next generation Street Artists this week in the Armory Week shows and wrote about it yesterday; New High-Water Mark for Street Art at Fairs for Ar...
Brooklyn Street Art Curly Dark Clouds Don Pablo Pedro LNY Mr. Brainwash NoseGo PA Philadelphia Sheryo Stupid Easy The Yok