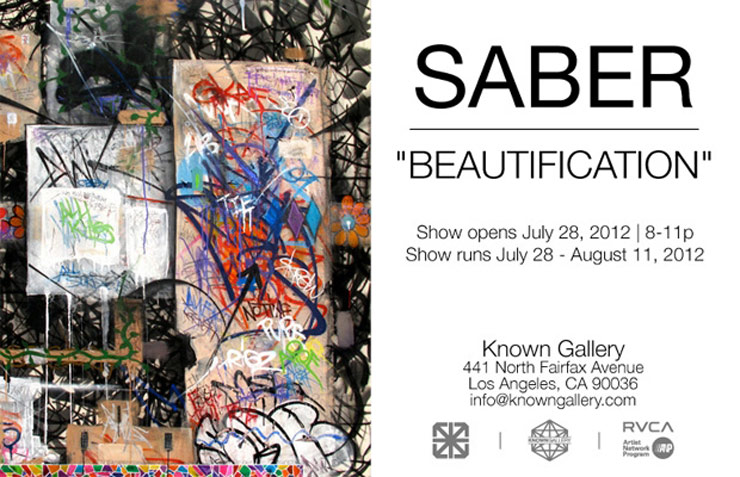 Among the thousands of people who make up the graffiti community around the world, there are few names that carry the same legendary quality as SABER. Born in the Los Angeles suburb of Glendale, SABER was raised by creative parents and discovered his passion for art at an early age. At 13, his cousins introduced him to graffiti when they took him to see the spray paint-covered Belmont Tunnel. From that moment on, he was hooked. After honing his skills on local walls, SABER joined MSK, and was later inducted into legendary piecing crew AWR.

SABER was already a fixture in the Los Angeles graffiti scene by 1997 when he completed the largest graffiti piece ever created. His piece on the sloping cement bank of the Los Angeles River was nearly the size of a professional football field, and took 97 gallons of paint and 35 nights to complete. In a famous photograph—taken by his father just after it was finished—SABER stands on the piece and appears as a tiny speck amid a giant blaze of color. It catapulted SABER to legend status in the graffiti world.

SABER began exhibiting in his fine art in 2002. His monograph, SABER: MAD SOCIETY, complete with stories of his graffiti misadventures, was released by Gingko Press in 2007 and is now in its second printing. In October 2010, SABER released a video in which the year’s heated debate about health care was spray painted over the American flag. While some saw it as desecration, SABER advocated for health care reform in the video, revealing that he had epilepsy and was un-insurable. This work led SABER to create a large group of American flag paintings called the Tarnished series.

35 Artists in Barcelona Trying To Save The Arctic with Greenpeace
Yesterday our posting was about artists in London creating works about endangered species and today we go to Barcelona where 35 artists joined with Greenpeace and a local group named RebobinArt on Apr...
Shepard Fairey: Earth Crisis
Artist and activist Shepard Fairey this week releases a 2 volume "Earth Crisis" set that commemorates a recent public environmental project and doubles as a collection of plates to jumpstart your coll...
Alice Pasquini Photographed by Jessica Stewart
We’re counting down the last 12 days of 2012 with Street Art photos chosen by BSA readers. Each one was nominated because it has special meaning to a reader or is simply a photograph from 2012 tha...
Joe Caslin in Dublin and On a Castle for Same-Sex Marriage
Irish illustrator Joe Caslin has just completed a two-mural campaign this spring in Dublin’s city center on the side of a castle in Co Galway in support of this May’s country-wide same-sex marriage re...
Boijeot + Renauld Update : Rain, Wind, & Inquisitive Upper West Side
The French duo Boijeot & Renauld have logged one full week and three days of crossing Manhattan via Broadway. As you know they are embarking on an ambitious project where they intend to cross Ma...
Brooklyn Street Art CA Known Gallery Los Angeles Saber