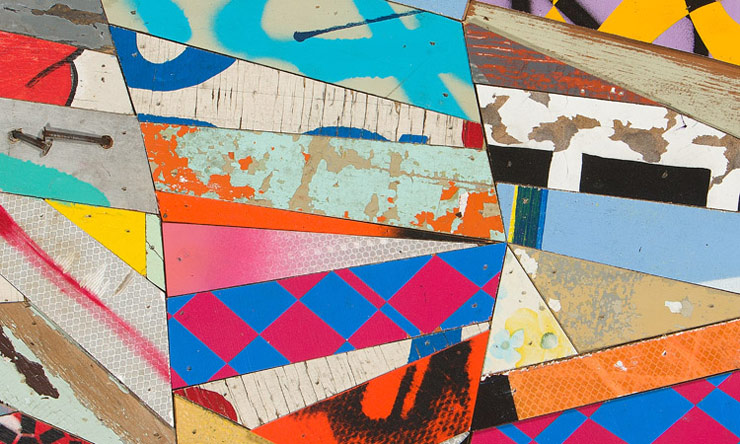 Known Gallery is pleased to present Gilgamesh, a new body of work by REVOK opening on Saturday July 28 and on view through August 11.  This exhibition will mark REVOK’s second show with the gallery.

With Gilgamesh, the artist has refined his technique of cutting up and reassembling found objects that once had a life of their own. All materials are scavenged from abandoned homes, churches, businesses and buildings in Detroit, Michigan, the city where REVOK has taken refuge.  The artist extracts the beauty in urban decay, from dilapidated buildings and rubble of the past.  An integral part of the process of acquiring his materials is exploring the neighborhoods, going into abandoned buildings, investigating forgotten places and sometimes in the course, encountering the people who once lived there.  The artworks are then named after the street addresses from which he excavates his materials, leaving the stories embedded in the assemblage.

A modern approach to Americana, REVOK creates geometric collages from these recovered relics, forming patterns, shapes and textures that are a direct result of years of wear and tear.  REVOK finds inspiration in what others might deem as useless.   As a fearless graffiti artist who has largely mapped and plotted the world, he turned his focus to the ruins of the Motor City, a vacant playground of beautiful architecture. REVOK’s experiences as a graffiti artist have fostered an appreciation for the things that surround us everyday, but for most, would go unnoticed.

“I’ve always struggled with permanence.  Out of twenty-two years as a graffiti writer, from my entire body of work, less than 1% exists, and the permanence of graffiti, particularly in Los Angeles, is more temporary than most places in the world.  It has always been one of the main motivations of graffiti writers to create work that’s going to last.  We want to create work that’s going to live for a long time.”

REVOK recently shared his artistic ambitions on a larger scale by creating the Detroit Beautification Project, inviting 25 artists from around the world to revive the forsaken city and provide encouragement for the community.

Garnering inspiration from the four thousand year old poem, the Epic of Gilgamesh, which recounts the Sumerian king’s quest for eternal life, REVOK has resurrected a city’s past using its disregarded remains. The flotsam and jetsam have now become memorialized artifacts through REVOK’s meticulously crafted handwork, giving new meaning and immortality to what were once ordinary objects.

REVOK constantly struggles to overcome the connotations associated with the type of artist he is, which in the past, has been met with overwhelming opposition and with the intent to eradicate his life’s work. REVOK’s work reflects not only his story as an artist, but also the story of a civilization and its people.

Ann Lewis + StudioSpaceNYC Leave Things "Unspoken" in Manhattan
Some existential thoughts and questions are left UNSPOKEN in our lives. A new collaborative exhibit in a 14th Street pop-up space offers you the opportunity to engage with some of yours. Of cour...
Spaik and Libre Collabo Mural in Mexico City
A collaboration between two Gen Y Mexican muralists went up this month for college age festival goers at an electronic dance event in Mexico City that features multiple DJs, carnival rides, laser ligh...
"The Wack Donald's Project" and Mr OneTeas
The actual street and the digital version of it are now intrinsically linked and often if you see new occurrences of street art it takes just a bit of searching online to find out more about the artis...
Case Maclaim: Wishes And Hopes for 2018
As we draw closer to the new year we’ve asked a very special guest every day to take a moment to reflect on 2017 and to tell us about one photograph that best captures the year for them. It’s ...
A Selection of Murals from "MURAL" in Montreal 2016
Have a look at some of the murals from this months MURAL festival in Montreal, which began in 2013. There is no discernible theme among the collection here aside from many of them being technically o...
Brooklyn Street Art CA Known Gallery Los Angeles REVOK