“All of us are like marionettes,” says Ben, “Somebody pulls our strings and we move.” 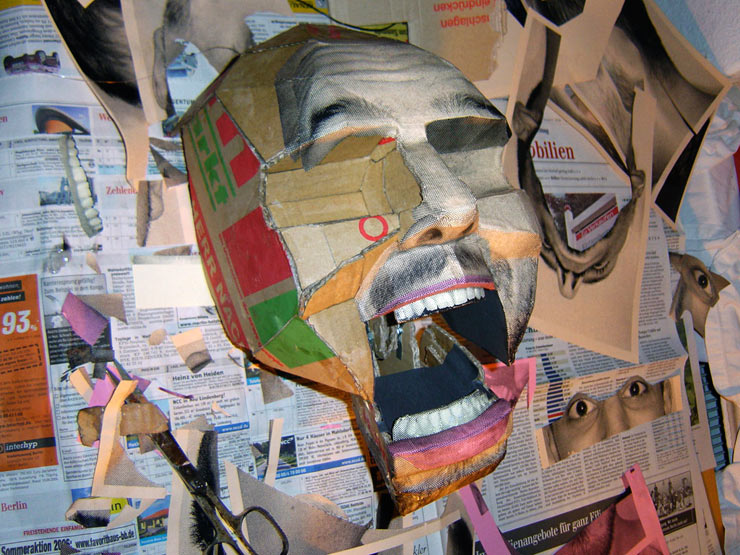 Various and Gould can’t be sure that their own strings didn’t get pulled last week when they installed on the street a life-sized replica of one half of this German Street Art duo. Hanging from the beams below a train station in Berlin-Kreuzberg, the cardboard puppet named “Heinrich” had gone on display two or three times indoors before but the artists wanted to see how he would be received by passersby in the public sphere.

“Before we were even done installing people showed up and started to play intuitively with it by pulling the strings,” they told us as they described their surprise at what would become a 6-day experience. 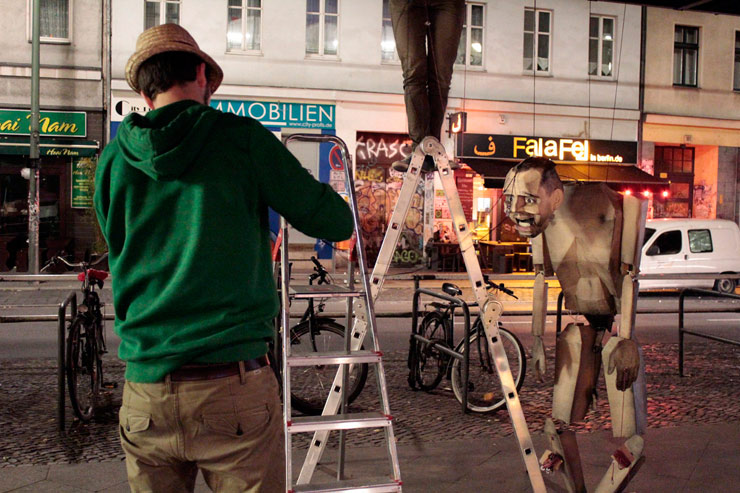 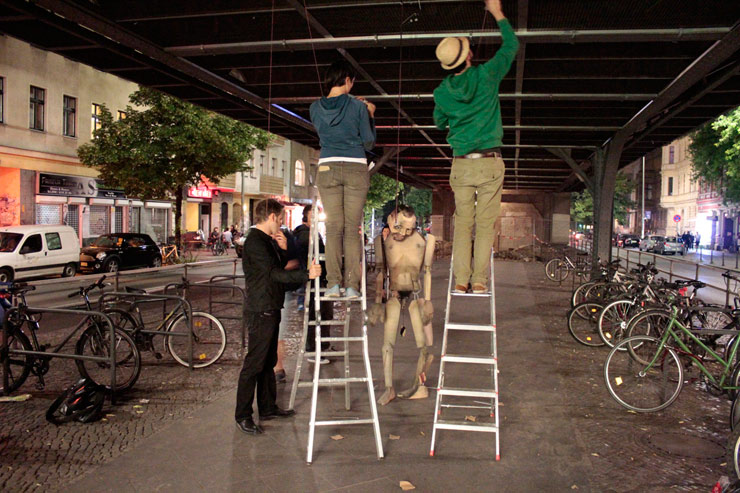 People from all walks of life and ages took interest in this naked man hanging out near the bicycles, and many took his movements into their own hands. The artists visited the site regularly to observe the interactions, and often found that a mirroring of movements, a sort of dance, took place. “Not only was the marionette being moved but also the people moved themselves. Some just pulled  one of the chords briefly, while others would get totally into it, grabbing the strings with both of their hands, experimenting with various sequences of movements.” Their lifeless creation somehow brought the street to life, and vice versa. 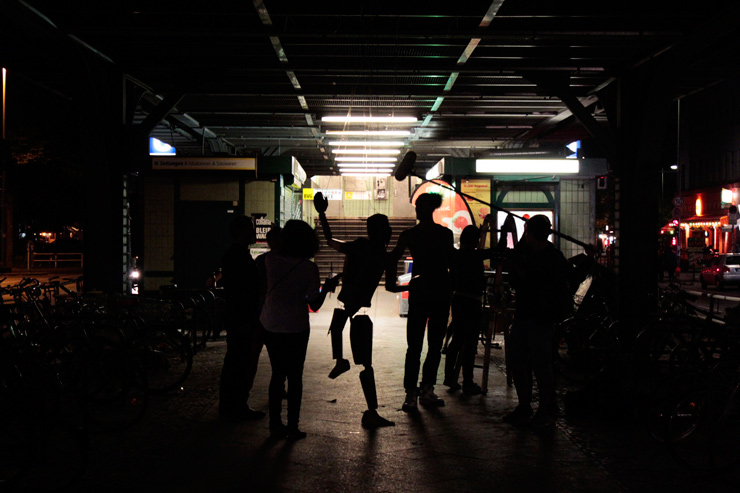 Sometimes there was damage to Heinrich that they needed to repair when visiting him first thing in the morning, and he suffered one violent episode that left his arms dangling by themselves from the hooks in the ceiling above. But he also gained a protective crew of friends who call this area home, including the 40-ish slim musician named Ben with a bandaged hand of his own. Drinking coffee or beer with his buddies all day, Ben took on a protective air toward the puppet, instructing people how to use the strings. To their amazement, the artists often found that their creation had been repaired; a torn-off foot was reattached with a rubber band and a shoulder joint was rejuvenated with an empty cigarette box and some adhesive tape. 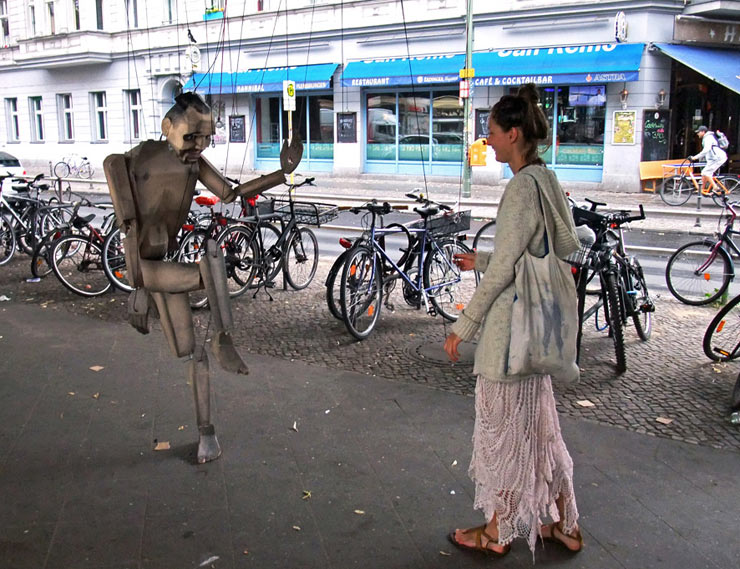 What began as a fun experiment with a puppet that they were ready to part with eventually transformed into a bonding experience they had not predicted. Watching individuals interact with the strings became like poetry. “It looked like two marionettes facing each other with both being joined by the same chords,” they say. Finally one day Various and Gould found that Heinrich had been cut down from his strings and taken away, perhaps to someone’s home.

For their experience, they cannot help but think of the people they met, and what Ben said about everyone being a marionette. Public artists know of course that public art will always be subject to the whims of the public. What they didn’t expect was to find that their puppet project might have had some heart strings attached to it. 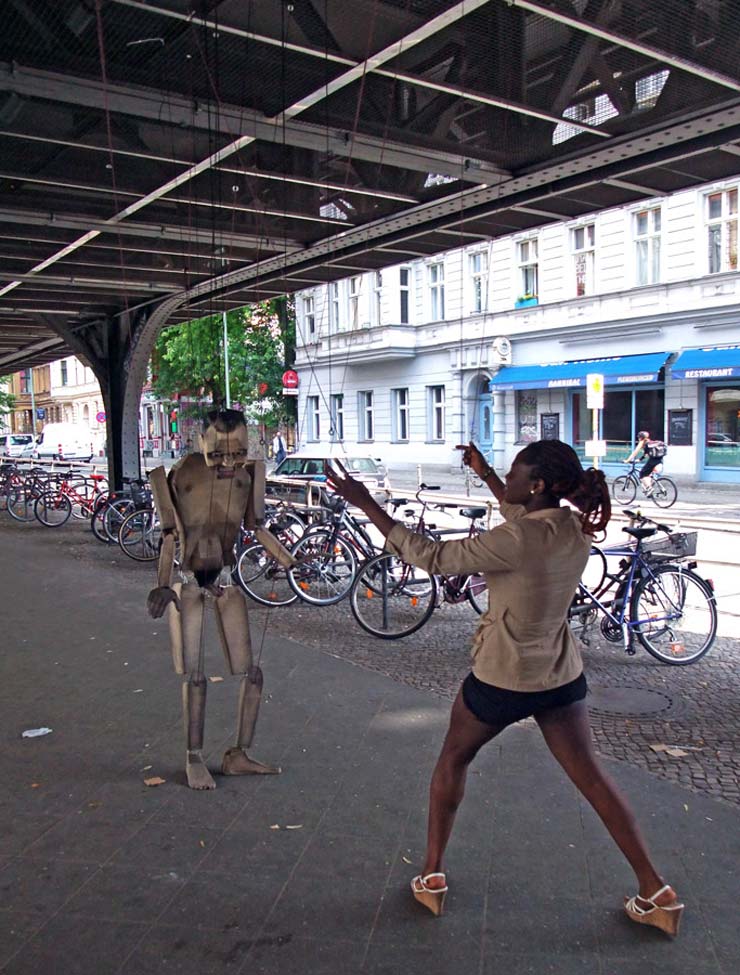 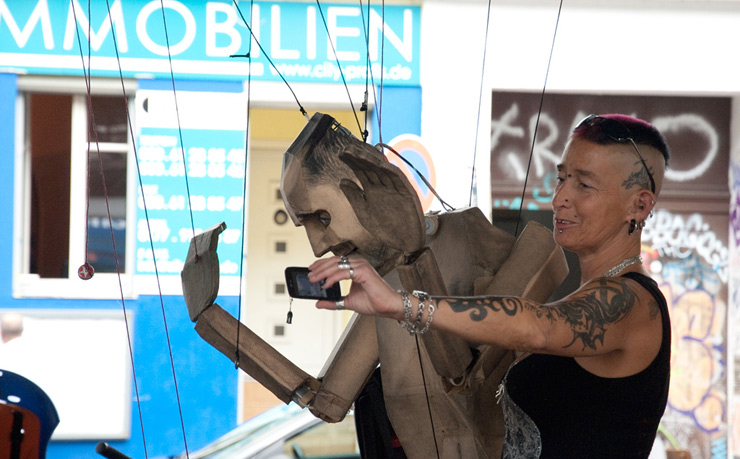 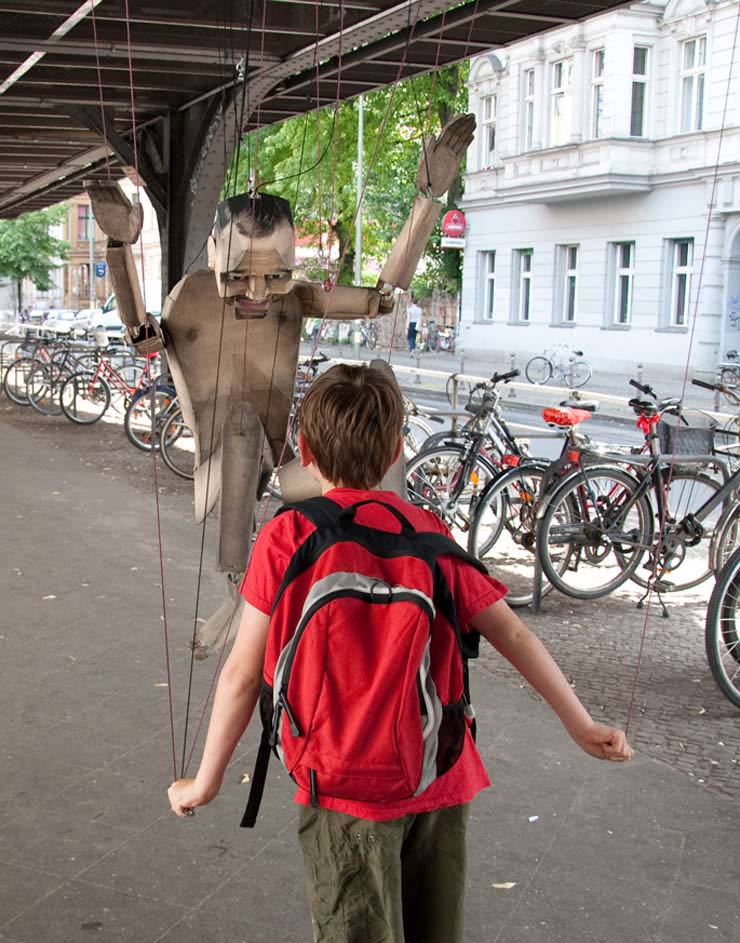 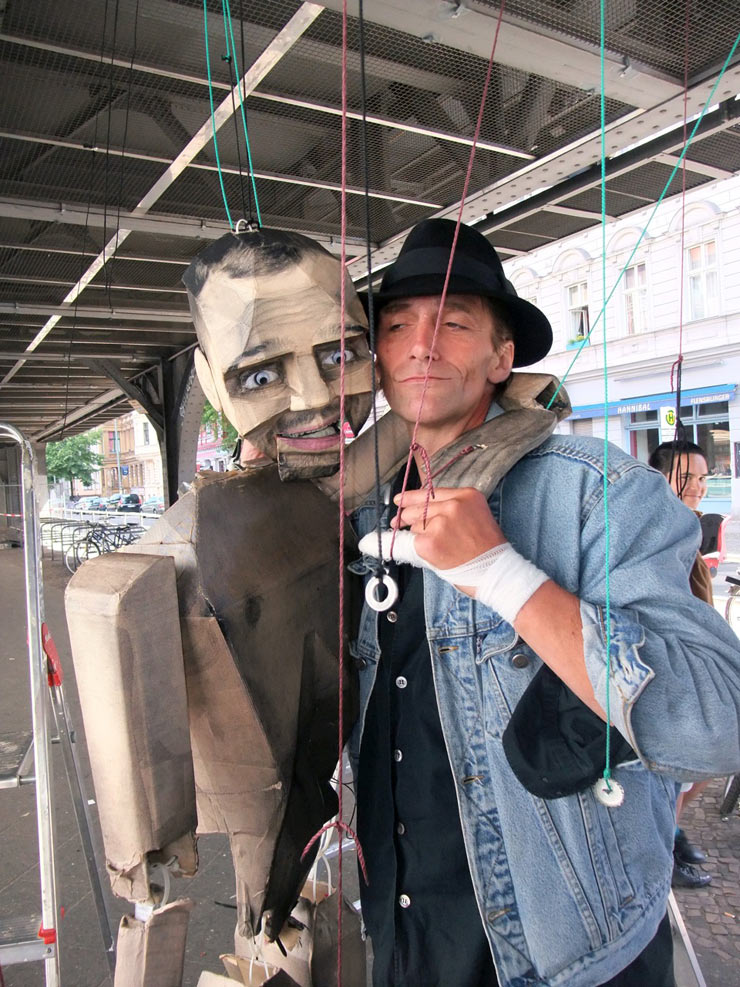 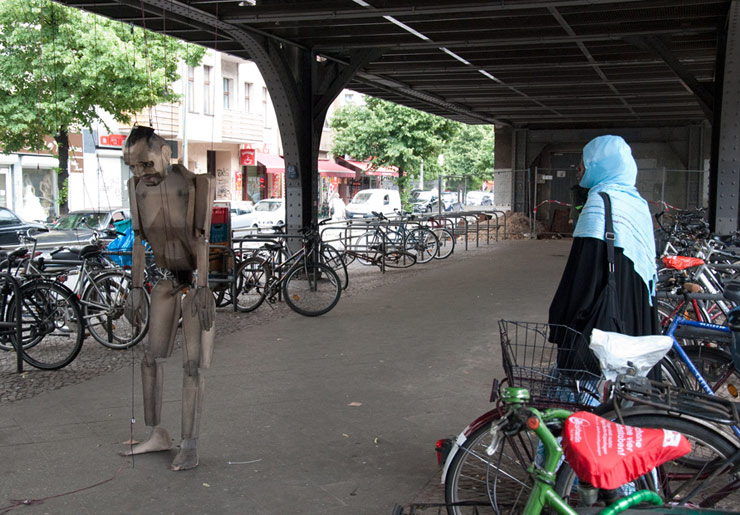 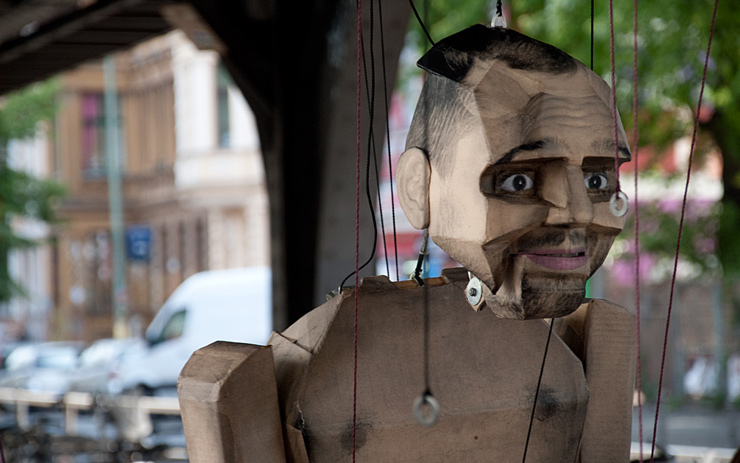 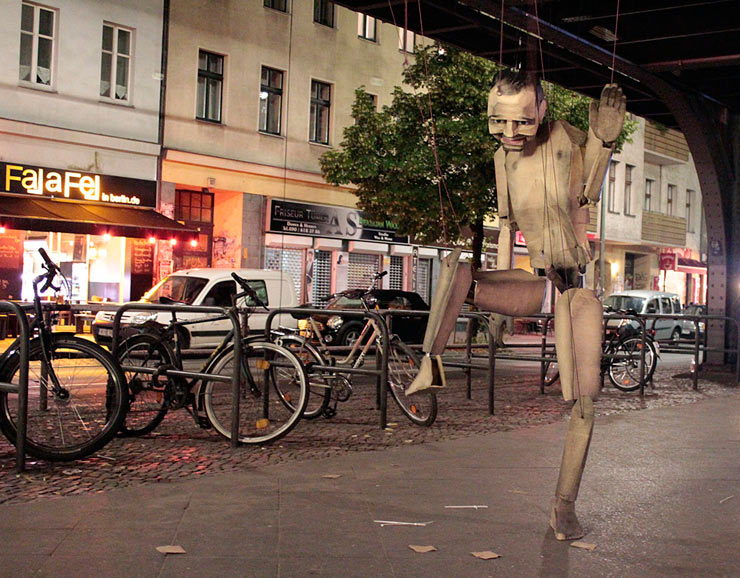 The artists wish to thank Lucky Cat and Studio Nura for their photography, support and help with this project.

“Heinrich”, a life-sized marionette by Various & Gould
Installed at Goerlitzer Bahnhof in Berlin-Kreuzberg on the 10th of July, 2012.

Etnik and a Poplar Tree for "Without Frontiers" in Montova, Italy
Stockholm born, Florence based ETNA created this poplar tree to rather levitate on a wall in Mantova, Italy recently. Etnik for Without Frontiers Festival in Mantova, Italy. June 2017. (photo © L...
Various & Gould: Wishes And Hopes For 2018
As we draw closer to the new year we’ve asked a very special guest every day to take a moment to reflect on 2017 and to tell us about one photograph that best captures the year for them. It’s ...
Zio Ziegler: Using Intuition on the Street and In the Studio
Zio Ziegler opens his new show tonight in Oakland, CA and today on BSA we give you a full immersion in the “Intuitivism” that he is tapping into and channeling at the moment, as well a sense of his co...
Spaik: Modernism, Muralism, and Color in Morelia, Mexico
An Awakening! A good way to start the week, and in the case of murals by Mexican Street Artist SPAIK a way to take flight. You can see it in all three – the small pink birds that lift off the heart, ...
Lucy Sparrow's "Delicatessen on 6th" Has Everything You Felt You Needed
Make sure you stop by the deli when your near Rockefeller Center. Lucy Sparrow. "Lucy Sparrow's Delicatessen on 6th". Rockefeller Center. New York. (photo © Jaime Rojo) You know, Lucy Sparrow’...
Berlin Brooklyn Street Art Jaime Rojo Lucky Cat marionette puppet Steven P. Harrington Studio Nura Various & Gould