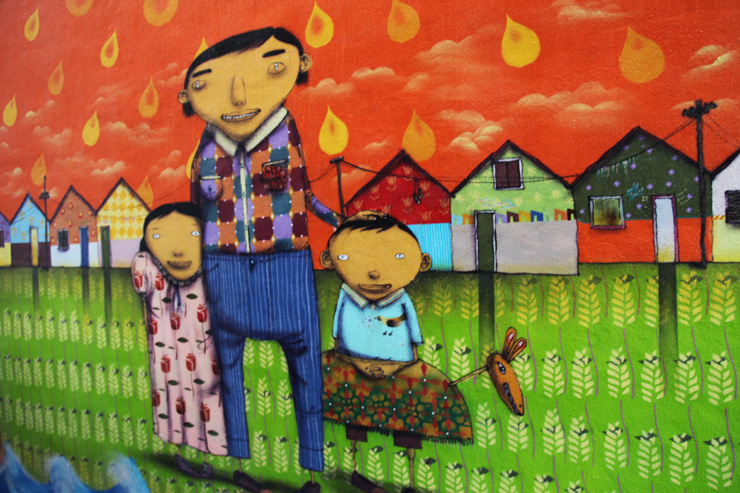 August 1–November 25, 2012
The ICA presents the first solo U.S. exhibition of Brazilian  artists Os Gemeos. The ICA exhibition will include a selection of the artists’ paintings and sculptures, as well as a public mural outside the museum

This August the ICA will present the first solo exhibition in the United States of works by the Brazilian brothers Otavio and Gustavo Pandolfo. Best known as Os Gêmeos, the twins are a major force in graffiti and urban art. The twins have a deep bond; they are tireless collaborators and say that they often experience the same dreams. In an effort to share their dreams with the world, they depict their visions in surreal paintings, sculpture, and installations: human figures with removable faces, exploding bursts of color, and room-size heads installed with shanty interiors.

Os Gêmeos draw not only from dreams, but also from their surroundings, incorporating these elements to forge a unique visual style. Their narrative work is a visual synthesis of their everyday lives: the color and chaos of Brazil—particularly in their neighborhood in São Paulo, Cambuci—or yellow-skinned youth in red hoodies breaking into train yards and painting in subway tunnels. A common motif depicts several graffiti taggers garbed in brightly patterned clothes stacked atop one another to reach an impossibly high spot. In contrast to the more contemporary urban themes, rural Brazil has an equally significant presence in their work. Carnivals, music, and folk art fascinate the twins and inspire fantastical portraits of musicians and paintings of processions and festivals—all of which are based on their own photographs.

Os Gêmeos date their artistic beginnings to 1987 when hip-hop invaded Brazil. The music and images of youth dancing and painting graffiti, transmitted via photo books and films, left an indelible mark on the twins. But in the late 1980s, the lack of information about art and art-making materials—Brazilian spray paint was expensive and inferior in quality—forced the artists to improvise and create their own visual style. They began painting New York graffiti–style murals with house paint, brushes, and rollers instead of spray paint. In 1993 while in Brazil, Os Gêmeos met then emerging artist Barry McGee. He provided magazines, materials, and information and began to paint with the twins. McGee was making a living as an artist, a fact that inspired the twins to quit their banking jobs and focus entirely on working as artists. Today they are two of the most prominent figures in public art, having succeeded in creating large-scale murals and painting public transportation throughout Brazil.

To Os Gêmeos labels—as well as reality—are not important. They do not consider themselves street artists, they “just want to paint.” Their art in public spaces, which they refer to simply as graffiti, is a means to share their work with a broad audience. This exhibition will highlight the multiple influences and recurring visual themes found in the artists’ paintings and sculptures, and allow audiences an opportunity to experience their richly fantastical work. As part of the exhibition, the artists will visit Boston in August 2012 to paint a large-scale, site-specific mural.

Tell It to The Judge ; Graffiti Artists Win in 5 Pointz Case
In a ruling that many graffiti and Street Artists interpret as a validation of their artwork and which may spawn further legal claims by artists in the future, Brooklyn Judge Frederic Block, a United ...
Wall Therapy 2014
Wall\Therapy has concluded in Rochester again, this year with a focus on portraits and today we bring you an update from some of the talented photographers on the scene in this north western New York ...
El Tono Talks Post-Graffiti with MZM
Kristina Borhes & Nazar Tymoshchuk at MZM Projects bring us an exemplary profile of the French public art/street artist/fine artist Eltono. A former graffiti writer and semi-professional lounger,...
Icy & Sot on a European Street Art Tour
New York's adopted Street Art brothers Icy & Sot have been spreading their wings in Brooklyn for a couple of years since we first interviewed them upon their arrival in the US from Iran. In that t...
Martha Cooper Library Presents: From Street to Canvas. Martha Cooper, MadC and Nika Kramer
With the foundation’s Dr. Hans-Michael Brey doing the intro, with YAP’s Sam Walter in the audience along with our show catalog contributor Christian Omodeo, and us in the front row – it was a great w...
Boston Brooklyn Street Art ICA Institute for Contemporary Art Boston MA Os Gemeos Pedro Alonzo