But before we begin, let’s boogie! It’s Friday!

It’s gonna be hot enough to fry some Jerk Chicken on the sidewalk today. Here’s a taste of nerdily chilly and funkaliciously electronic Hot Chip doing a song called “Night and Day”.

A handful of Americans were in London this 4th of July for the opening of a new show at Black Rat Projects Gallery in conjunction with LA’s Corey Helford Gallery. “Letters From America” includes new works from RISK, Ron English, SABER, and TrustoCorpand is now open to the public. 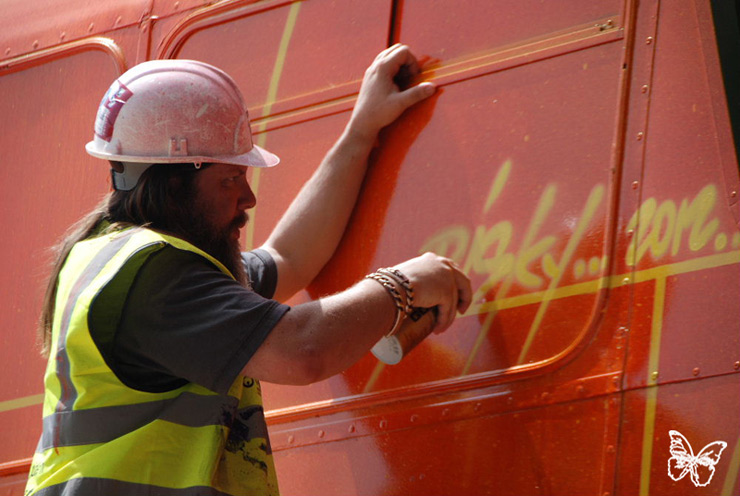 Risk (photo by Butterfly courtesy of the gallery) 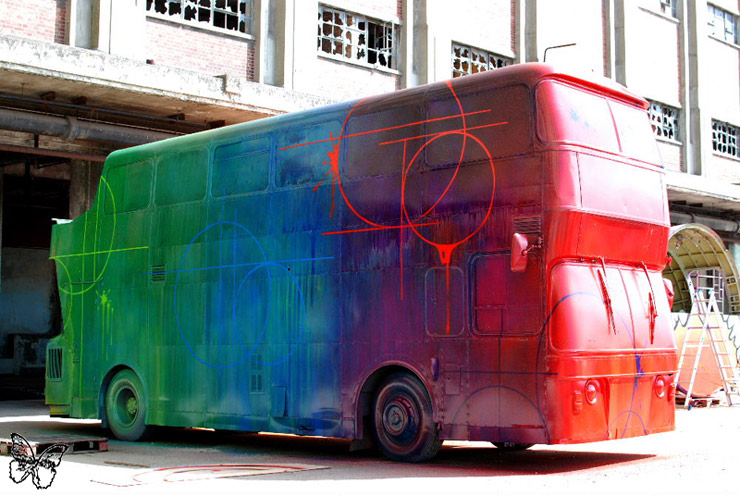 Risk (photo by Butterfly courtesy of the gallery)

Also some people have called to tell us of some sightings in London of the bad boy Australian Street Artist LUSH. The axiom that entitles the show, so be careful, haters. The LUSH location is a warehouse someplace near the Hackneywick Station. Good lush!

LUSH at the Museum of Sex in NYC. (photo © Jaime Rojo)

In Italy the illustrator/cartoon/doodle stylings of Jim Avignon are teamed up with the Museo Urbano Di Roma. Jim will be performing and painting live this Sunday at Grandma Bistrot. 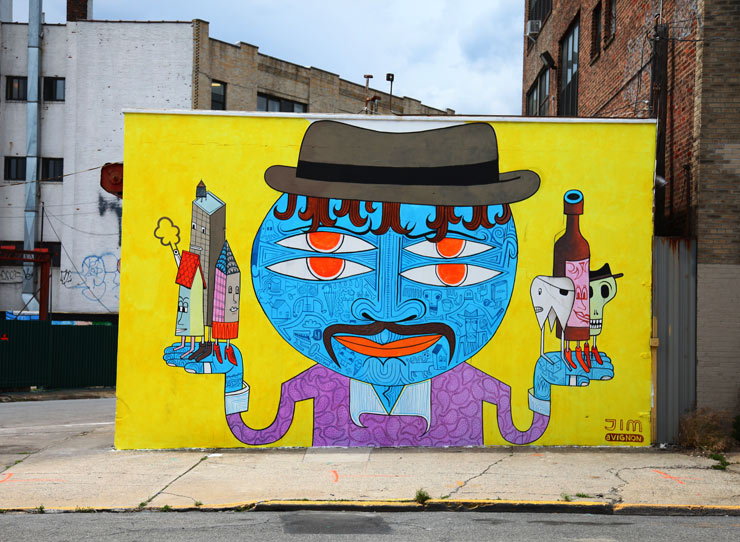 The Twist Gallery in Toronto, Canada invites you to “Mischief Over” a show by CASE. This show is now open to the general public. Click here for more details.

At the A – Side B – Side Gallery in London, Tinsel & Twinkle will show you how to kidnap a banker at their “Mini Retrospective”. This show is now open to the general public.  Click here for more details.

Two Miami Schools Enveloped in Murals : The RAW Project in Wynwood
Reimagining Art in Wynwood: The RAW Project. The National Endowment for the Arts (NEA) received $148 million in 2016. The war budget, also called the “Defense Budget”, was approved for $582 billion...
BSA Film Friday: 04.27.18 / Chop 'Em Down Films Special
Our weekly focus on the moving image and art in the streets. And other oddities. Now screening : 1. Nychos “Wilhelmine von Bayreuth" 2. RETNA X Vhils in Echo Park 3. TRAV MSK 4. OKUDA; FALLAS...
Nick Walker Falls in Love With NYC
Bristol born graffiti / Street / fine artist Nick Walker has fallen in love with New York during these last couple of years. The stencilist whose work pre-dates the popularity of his town-mate Banks...
Moniker BK 2018 Catalogue Introduction Text by BSA
For the past few days we've been highlighting some of the artists whose brand new works will be debuted this week at Moniker International Art Fair this week. We are pleased that our editor in chi...
Jeff Gillette and "Dismayland" Emerge from Nuart Debris
For the ninth straight year, BSA brings Nuart to our readers – artists, academics, collectors, instructors, curators, fanboys /girls, photographers, organizers, all. Not sure who else has been cov...
Brooklyn Street Art Case Jaime Rojo Jim Avignon LUSH RISK Ron English Saber Steven P. Harrington Tinsel & Twinkle Trustocorp