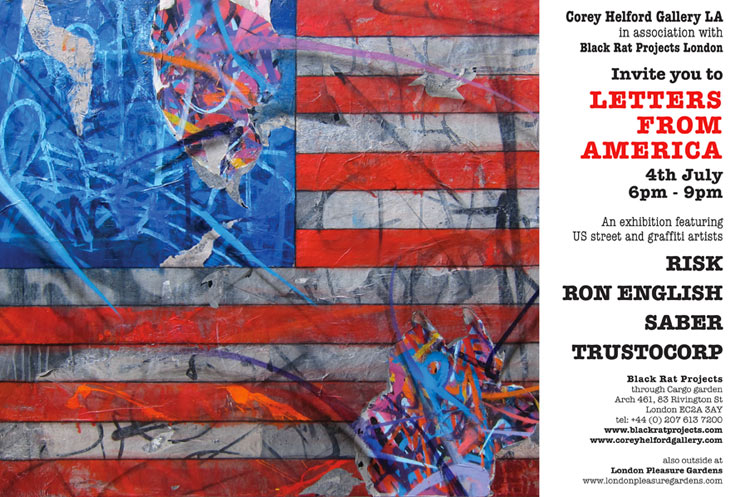 Celebrated graffiti and street artists from the US invade London

for the 2012 Summer Olympic Games

“LETTERS FROM AMERICA” continues its UK invasion with an all-American Independence Day celebration on Wednesday, July 4 at Black Rat Gallery. Open to the public, the exhibition transforms the London tunnel into a bunker of America’s most wanted artists, showcasing new works from RISK, Ron English, SABER, and TrustoCorp. Gallerists Jan and Bruce Helford add, “Corey Helford Gallery is proud to be bringing U.S. artists to a UK project of this “Olympian” scale and finishing with a celebration of four of the top U.S. street and graffiti artists – RISK, Ron English, Saber and TrustoCorp – in a gallery that’s been home to some of the finest street artists in the world, Black Rat Gallery.”

The exhibition of paintings and sculptures will feature an original Bob’s Big Boy statue customized by RISK, as well as SABER’s famous flag series, which serves as a commentary about the National Healthcare System and his personal challenges with it. For the show, SABER will unveil first Union Flag piece, titled “The Flag Of The National Healthcare System.” “Quite literally, I paint for my life,” he says. “Every painting I touch, I try to envision my pieces on a travel into the future as a record of the great emotional value as well as artistic merit that can only be matched by someone living under such extreme conditions during these tumultuous times. I only hope that after I am gone, these pieces will be hung on the walls of a different era where we as nations care more about nurturing its citizens than perpetuating the system of profit over life.”

The opening reception for “LETTERS FROM AMERICA” at the London Pleasure Gardens is free and open to the public. Outdoor installations will be on view until December 2013. The opening reception at Black Rat Gallery is private and by invitation only. All of the artists will be in attendance on opening night, and the show runs through July 18, 2012.

NesPoon Makes Swiss Lace
There used to be over 600 lace-makers here. Nespoon is remembering them with her new works on the street. NeSpoon. Le Locle, Switzerland. July 2019. (photo © NeSpoon) Part of a residency that ...
Nuart Day 5: Flying High in the Norwegian Sky
Live from Nuart as it’s happening folks, and the festival is proving to be a rather impressive small beast at this point - one with multiple heads and legs and hands waving paint brushes, aerosol ca...
Chihuahua, a Mexican Desert City with a Few "Street Art" Blooms
“Chihuahua is like one big ranch,” says a local reporter who guides you around this desert city known for beef, cheese, sotol, cowboy boots... and a growing middle class – thanks to the hundred plus m...
BSA X ONO'U Festival 5: Day 6 - Raiatea Wrap Up
This week BSA is checking out French Polynesia to get an appreciation for the Street Art, graffiti and street scene here while the 5th Annual ONO’U is taking place. Join in the tropical action while w...
BSA Film Friday: 02.14.14
Our weekly focus on the moving image and art in the streets. And other oddities. Now screening : 1. Painting, Yoga and Love on the Roof 2. Spidertag in Madrid 3. HOTTEA in St. Paul Home Depot ...
Black Rat Projects Brooklyn Street Art Corey Helford Gallery London RISK Ron English Saber Trustocorp U.K.