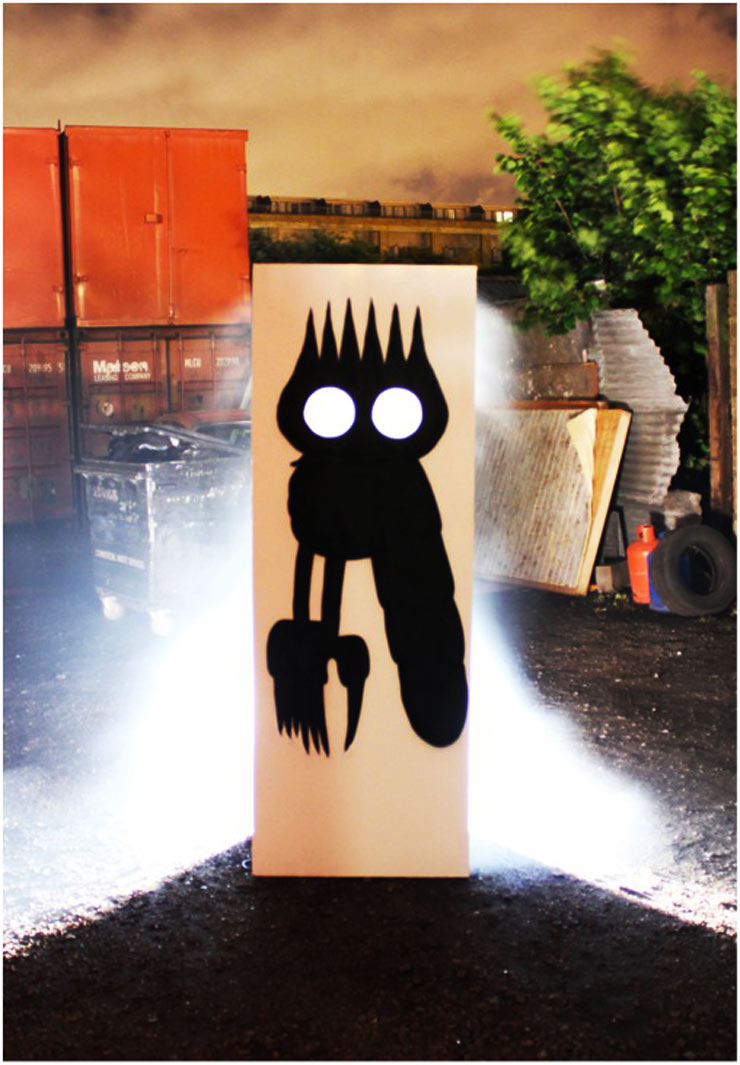 Hey everyone, see below the link to a video I made to promote my new solo show “The Other Side Show” opening in London 12 July at Roktik Gallery in East London. It will be my first solo show in four years and centers around the theme of duality – light and dark and black and white. The image of the owl will still be used in many of the pieces, but will have more errie and playful associations with video, installations and two new print releases that will glow in the dark.

Returning to the gallery space is famed London street artist Dscreet with his first solo exhibition in four years entitled “The Other Side Show.” Opening 12 July at Roktic Gallery in Brick Lane, the exhibit will feature brand new works based around Dscreet’s iconic owl in the form of paintings, installations, media and a limited edition print release.

“The Other Side Show” will be Dscreet’s most ambitious exhibit to date creating works reflecting themes of duality, death and the legacies we leave behind after departing from this world. Most notable as a member of London’s premiere street art crew Burning Candy, these new works reveal a darker side of Dscreet’s art and showcase his range as a fine artist.  Aside from his background in letter based graffiti Dscreet’s painted owls, his patented image, are recognized internationally on the street. His gallery art further explores the various meanings associated with the iconography of owls. In many cultures the owl is considered to be a symbol of wisdom and perception while in others it is considered to be a “deathsayer” and symbol of evil.

In order to realize these interpretations, the gallery space will be dark with flashing strobe lights to create an eerie, yet playful atmosphere. Projections will play on a constant loop while the 2 brand new print releases will glow in the dark embodying the duality of light and darkness of the show’s overarching theme.

The highlights of the show will be working in pairs with each representing its opposite. Two doors invite the viewer to step through to “the other side”.  Two murals divide the room into “This Side” and “That Side” while two smoking birdhouses will invite viewers to look inside both at themselves and to view a physical emulation representing the core of the confusing duality. Audiences will encounter a film installation on loop of a Michael Jackson impersonator that will show a slightly bizarre and off putting interpretation of the King of Pop. While the film celebrates the iconic singer’s legacy, it forces audiences to question whether the iconic images of Jackson’s music and appearance are his true legacy despite the more publicly dark aspects that shroud his personal life.
For Dscreet, “The Other Side Show” is a deeply personal exploration of life and death that reflect his own near death experience at 17. After a drunken night out, he aggravated a blood clot in his brain causing him to realize his own impending demise, only to be saved by a paramedic before crossing over to the other side. The heart of the work questions how one will be remembered: by their light or dark side? Will your legacy be what you did under your real name or by an alternative pseudonym used for creative endeavors? Struggling with this concept as a working artist, this new body of work is a chance to reflect on his own legacy. Revealing his own thoughts on notion, Dscreet reveals:

Whilst dying I had begun to think about the point of existence and all that heaviness and what I would leave behind; aside from some ripped cones, empty bottles, a couple of sobbing girls and my family who would be very sad of course, who else would really care and what had I done or given to this world really, pretty much nothing at all…It was a shakeup and turning point and I believe it made me more focused on leaving a mark through my art; via graffiti I cloned myself a new more creatively expressive self.

So now I’m 2 people and 2 X 17 years old, living in a world defined by absolutes. It’s time for a review, to confront myself in a mirror and wonder is this reflection any closer to the truth or somewhere in-between, can there be one without the other?

Dscreet has been painting graffiti for 20 years as a member of various influential crews like Burning Candy. He is notorious for his electrified owl image of which he has painted thousands all across the world. He has previously shown work in galleries in New York, Paris, Lyon, Melbourne, London, Berlin, Trieste, Miami, LA, Sheffield. His work has also been featured on Channel 4 documentaries like Robbo vs Banksy, The Burning Candy 3 Minute Wonder and the BBC News.

Aside from painting on the streets, Dscreet works in film and creates sculptural installations to house the work. His work is part of the V & A Museum’s street art print collection and he has created videos for street artist Dabs & Myla and Conor Harrington as well as the latest music video for The Duke Spirit. He has also been published in numerous street art & graffiti books including Graffiti 365, London Street Art and New York Street Art.

Project M/3 Opens for UN in Berlin and Martyn Reed on Table Etiquette
"good table manners, social awareness, whether or not they are house trained..." Project M sounds like a James Bond plot feature, and if you’ve seen the smartly swarthy man of mystery at the helm ...
Isaac Cordal + INO. Up North Fest X BSA: Røst, Norway. UPN Dispatch 1
This is the third year for Northern Norway's UPN Festival and this year it's on an Island called Røst and includes a collection of artists eager to do site-specific and environmental works - one e...
Photos Of BSA 2021: #17: Mother Nature OG Best Artist
We’re celebrating the end of one year and the beginning of the next by thanking BSA Readers, Friends, and Family for your support in 2021. We have selected some of our favorite shots by our Edito...
Mark Rigney, BSA Wishes And Hopes For 2019
Mark Rigney, photographer, writer, founder of London-based Hooked Blog Looking back it was for me a year of adventure and travel as I continue my ongoing journey to document the ever-changing and evol...
Christian Omodeo on "The Man Who Stole Banksy" & Its Streaming Release
In 2007 the anonymous graffiti artist Banksy painted a series of political works around Palestine. Later there was a mad scramble by people to cut them down and to sell them to the highest bidder...
Brooklyn Street Art DsCreet London Roktic Gallery U.K.