Last Friday morning all was going normally on the streets of Williamsburg, Brooklyn as the  cool, crisp breeze of a sunny May day made New York as it often is: Glorious. Up and down the sidewalk smartly dressed professionals hurriedly carried coffees and pushed baby carriages as meandering tourists stared quizzically at clean cut NYU students in their search for the fabled hipster scene that their travel guides had told them would be here.

Suddenly police activity seemed to hasten on the streets and police patrol cars were rushing to sidewalks and scattering flustered pedestrians. Within a matter of minutes Bedford Avenue was cordoned off with “CRIME SCENE” yellow tape from North 4th to North 7th streets and officers in various uniforms descended upon the neighborhood with fire trucks wailing and helicopters thundering.

Quickly word spread that there was a bomb scare. Possibly in a tree. 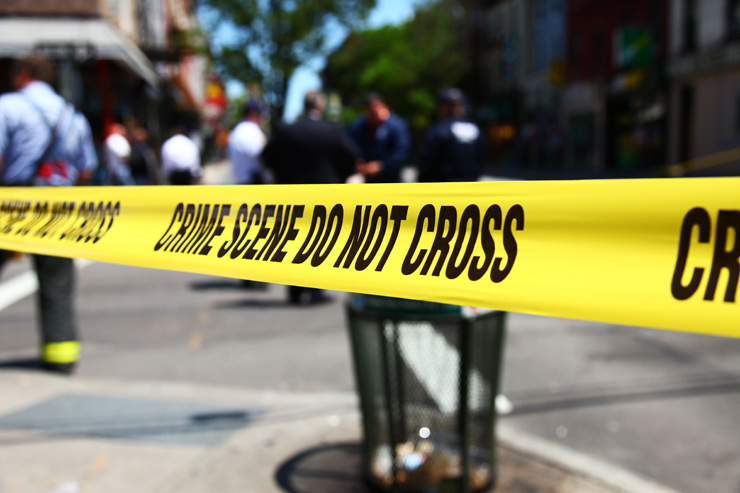 “Scare” is a relative word for New Yorkers, as police gently prodded curious rubberneckers to stand back and swept sleepy cafes clear of reticent morning journal doodlers. An impressive armamentarium of tools and gadgets were pulled from trucks and trunks and assembled in a somewhat semi-circular arrangement near a shady tree that bended gently back and forth with the breeze.

These officers’ firm and calm demeanor gave a sunny day a relaxed atmosphere, but the tension was still thick – a potential bomb was in the midst and protection was top priority. The offending piece in question hung from a thin metal arm duct-taped to the tree’s limb; the container was a simple deli grocery bag with the ubiquitous pledge of fealty to the city, “I Love NY” screen-printed on the front. The little bag swung gently as wires poked out from it’s handled top. 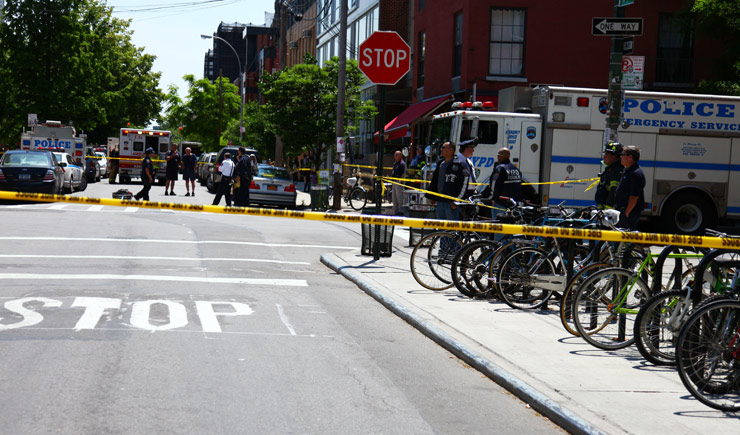 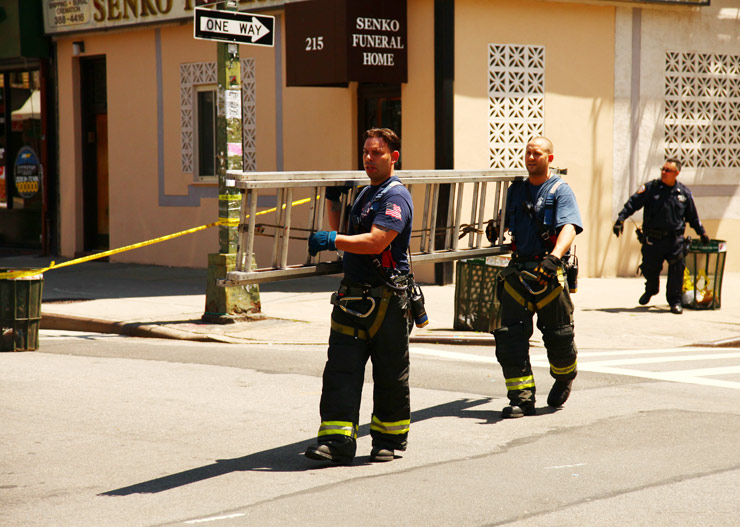 To photographers who document Street Art every day in this city, continuously scanning the urban environment for any manner of creative expression, this object might have caught an eye and been captured with a camera. But frankly, the competition for attention is fierce.

Williamsburg nearly birthed the Street Art scene here in the early 00s when artists called it home and every discipline of fine art transmuted itself into installation. A new sort of direct engagement with the public sphere took root and it continues to grow in cities around the world. No longer simply stencils, wheat-pasted paper or stickers on a news kiosk, in Brooklyn you are now likely to see more three dimensional pieces like a DarkClouds board bolted to a sign post, a steel REVS sculpture welded to a fence, a tiny match-stick Stikman embedded in the pavement, or a pink and purple camouflaged crocheted piece by OLEK covering an entire bicycle.  For years local artist Leviticus has been reassembling discarded furniture, musical instruments and found objects and placing them on these sidewalks on Bedford Avenue to the indifference of the rivers of people walking by.

And let’s not forget so-called “conceptual” work, ever able to confound. 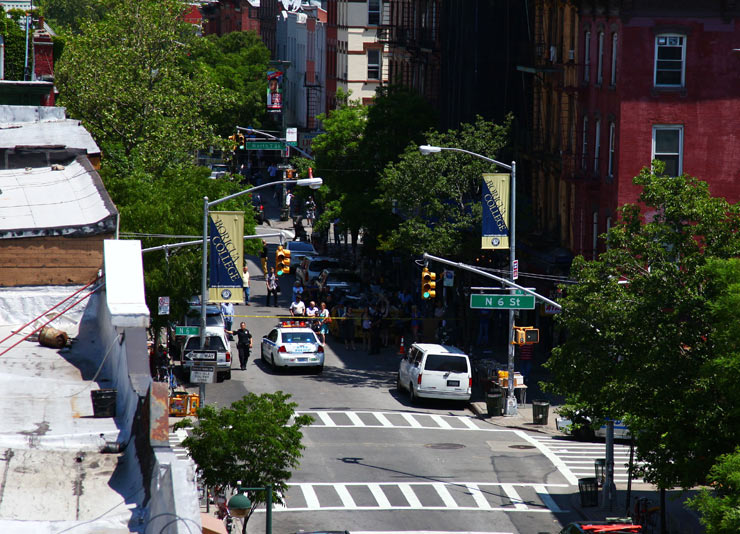 In the case of this piece, this non-bomb in a tree, the materials were very familiar to the public: A vellum plastic box, an “I Love New York” shopping plastic bag, duct tape, some wires. The materials? Non-threatening. Their arrangement and location: potentially threatening.

According to news reports, the artist Takeshi Miyakawa was arrested long after the scare was called off as he was discovered installing a second piece not far up the street. It appears he had planned an illuminated string of bags to pay a tribute of some sort to the city. 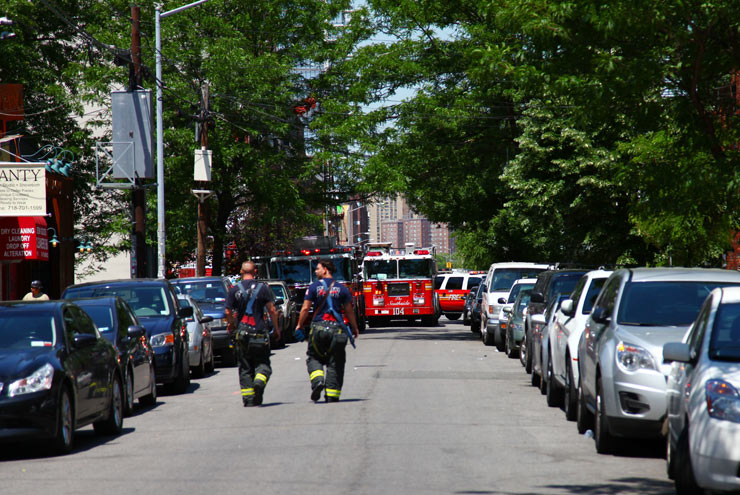 Few will rightly question the actions of the bomb squad to prevent a catastrophic event from taking place, and most would openly express thanks for their work that can put them at great risk. But art like this, and any sanctioned public art that goes through a more vetted process, does raise questions about its intersection with the law and ethics. In a time when almost anything is considered as possible art, it also could be considered a possible bomb.

Should an artist be held accountable for every possible interpretation of the work, despite its original intention?  Can other evidence be considered before assigning guilt? Does an artist, particularly those who install work without permission, bear responsibility to consider it’s effect on public safety? During a time in our history that is permeated with vacillating levels of fear and anxiety, should we attempt to agree on some guidelines?

Online images of Miyakawa’s studio and coworkers and their methodical design plans for this installation make you think he’s probably not a criminal, just a kooky artist with a questionable judgement. Welcome to New York; that sort of thing is the norm where academic and creative investigation often pushes into unusual territory we haven’t been in before. It even appears his intentions were to cheer the public – an expression of love for his city.  But one does wonder what affect a renewed surveillance of trees and signposts and street furniture might bring to a Street Art scene that doesn’t look like it has tired of exploring itself. 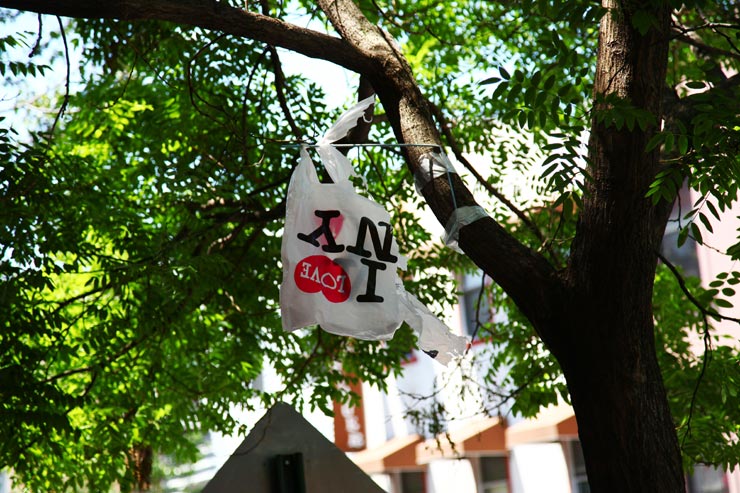 Takeshi Miyakawa “I Love New York” This is how the installation was left after it was dismantled by the police. (photo © Jaime Rojo)

Below are some examples of work on the street that are more than your run-of-the-can aerosol art. 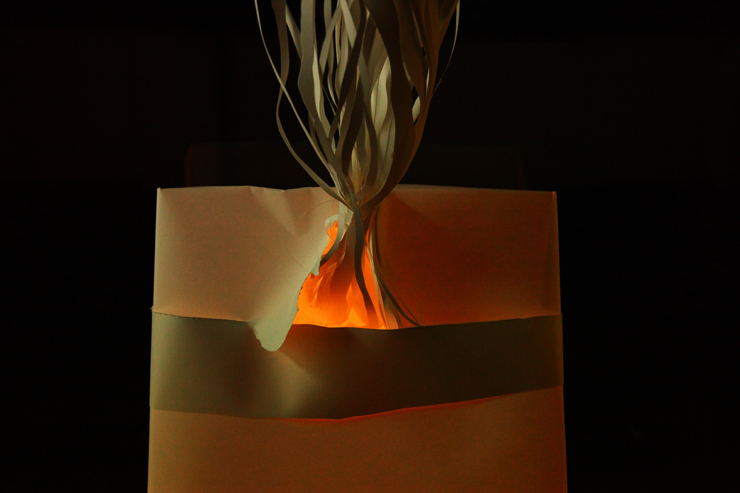 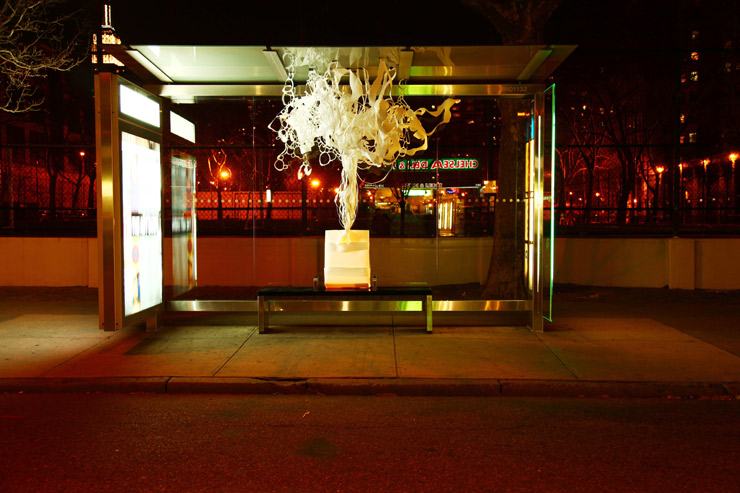 Click here to read our full interview with Ms. Seestadt and to see more images of her installation.

An unknown artist installed a series of metal and glass “eye” sculptures in Williamsburg in 2007 and 2008. (photo © Jaime Rojo) 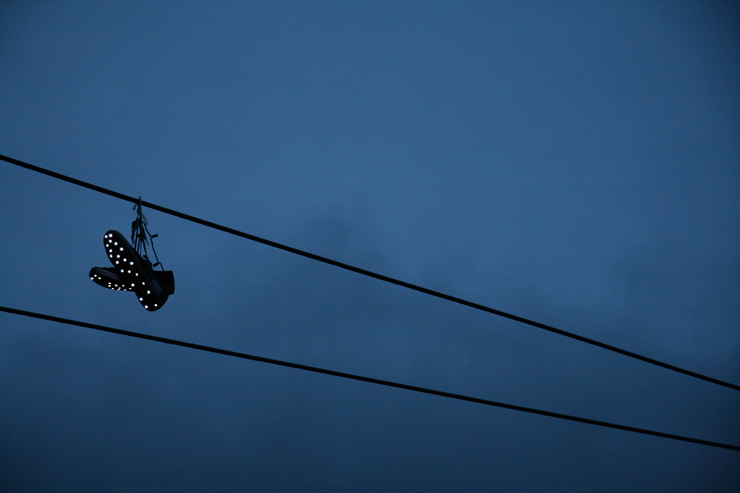 Here is a pair of BZBD shoes with LED lights in the soles for an installation a couple of weeks ago in Brooklyn. (photo © BZBD) 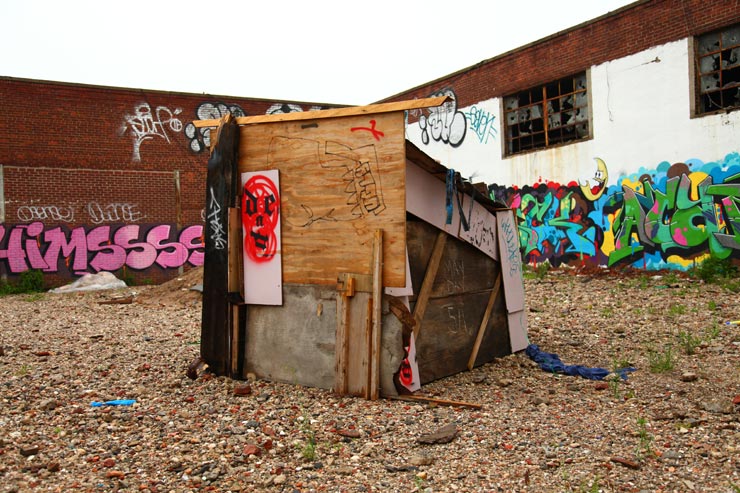 A shack installation in Brooklyn by an unknown artist. Or maybe it was a fort? (photo © Jaime Rojo) 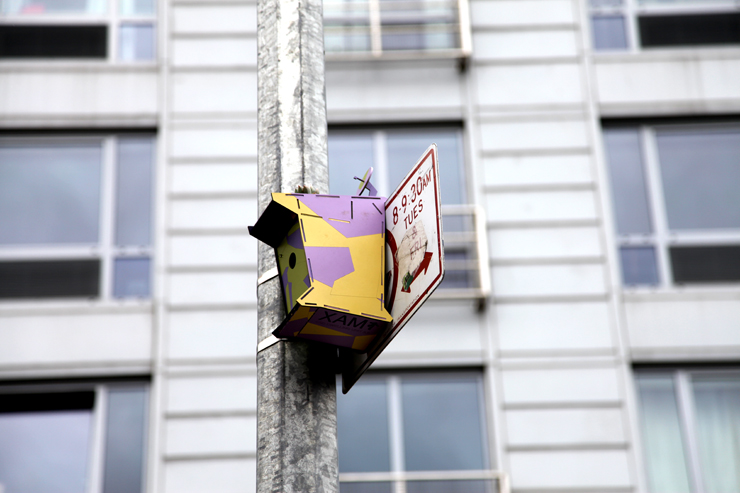 Street Artist XAM creates and places bird feeders and dwellings all over the city. Some are fitted with solar panels and an LED light. (photo © Jaime Rojo)

Read our interview with XAM here. 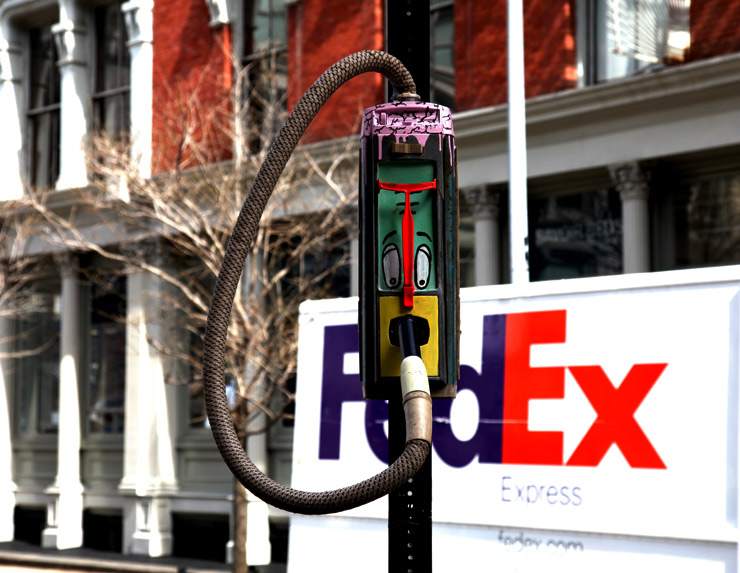 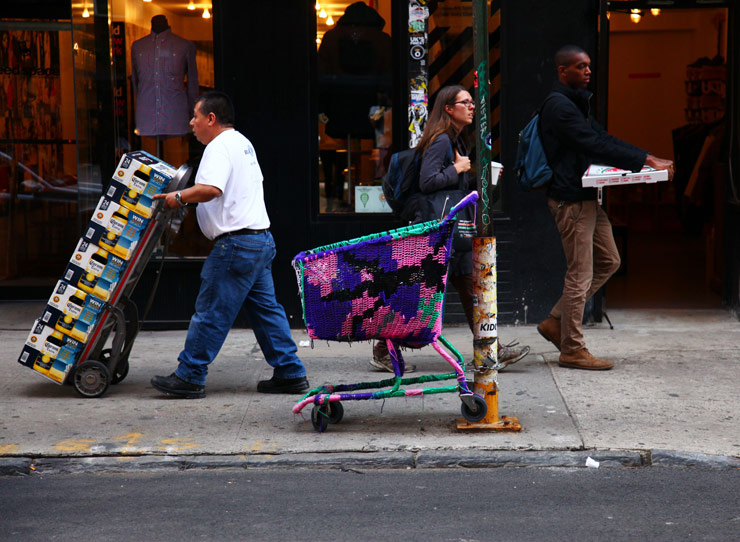 Skount "To Be Or Not To Be", Sarah Bernhardt & James Lafayette
Skount is debating whether to be or not in this adaptation of a hundred plus year old photo of Sarah Bernhardt, who holds the court jester Yorick’s skull in hand. A grave contemplation of suicide that...
Fintan Magee. Nuart 2016
For the ninth straight year, BSA brings Nuart to our readers – artists, academics, collectors, instructors, curators, fanboys /girls, photographers, organizers, all. Not sure who else has been cov...
Theresa May Graces the Street Art Scene in London
"No you May not!" Maureen Barlin, creative commons license Or so you might imagine Britain's Prime Minister Theresa May saying if you asked to illegally wheat-paste a political parody of her perso...
BSA Film Friday: 06.03.22
Our weekly focus on the moving image and art in the streets. And other oddities. Now screening:1. Just in Time for Jubilee - "God Save the Queen" Reboot - The Sex Pistols2. YUUE: Homesick3. Mi...
Dan Witz Goes Hardcore in NYC with Mosh Pit Collection
"After photographing in the mosh pits for awhile I began to get familiar with patterns in the music. Eventually it got to the point where I could sense the moment coming when things would really cut l...
aerosol Brooklyn Brooklyn Street Art BZBD conceptual art crochet Dark Clouds Jaime Rojo Jean Seestadt Leviticus NYC Olek painting Rae REVS Stencil Steven P. Harrington Stikman Street Art Takeshi Miyakawa welding Williamsburg XAM