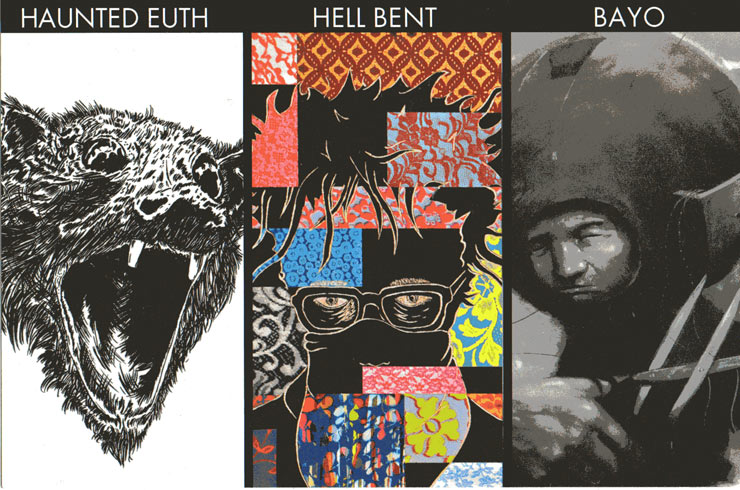 C.A.V.E. Gallery is proud to present new works by:

Bayo’s paintings depict visceral worlds, where the main character is the psyche as an axis of conflicts. His paint strokes signal a constant path where anxiety is inescapably contagious. Characters tend to avoid frontal sight, turning their eyes towards themselves and exposing their fragility. Dispirited forms allow us to prove that their author does not follow the statutes of reason. Each piece simultaneously depicts the rigor of obsessive details, the vagueness of repetition, and the sudden explosion of motion. All in an effort to express the architecture of his emotions, with a complexity that can never remain subtle.

For his new series – “A Quilted Life”, Hellbent employs a variety of techniques that add a unique 3D quality to his work. He has developed a stencil technique that creates a kaleidoscope “quilt” of color in cubist patterns. The complex compositional puzzle of the background seems to push and pull behind bold imagery. Instead of a paint brush, Hellbent often uses a power drill to etch forms into wood panels. Always looking to expand his craft by exploring different techniques and mediums, Hellbent has also experimented with colored liquid glass – adding to the vibrant spectrum and resemblance of stained glass in his work. The complex color patterns are intricately layered, creating a dynamic and bold new collection.

“My new work is entirely autobiographical – calling upon, navigating and negotiating the complex relationships and experiences I struggled to balance last year. Themes of addiction, love, struggle, fear and anxiety are paramount in the work I produced for this show. This new body of illustrations is a open acknowledgment to the past and signifies a new, positive outlook on the future.”

On view thru May 5