China has it’s own graffiti and Street Art scene, but you don’t hear too much about it. You can get a tour of local Street Art and graffiti in Beijing, check out sites like FatCap and of course the pool on Flickr. New York graff legend Daze even had a show at a gallery here a couple of years ago. According to some state media reports, portions of the Great Wall were the focus of a 2004 archaeological study showing graffiti was popular a long time ago, as crafted by wives of soldiers, who “decorated parts of the wall with images of clouds, lotus blossoms and ‘fluffy balls’ (xiuqiu), ‘symbols of peace and love’.  Right now it appears to be a common practice of tourists to carve their names into the bricks, which seems a bit more damaging than a Krinks marker, to tell the truth.

New York Street Artist Blanco did a little touring around Beijing and Shanghai last week and took a few pictures to send back home during the tour. He liked finding some familiar names in an unfamiliar country, and he was even surprised. Along with a few quick pictures he caught on the way, he wrote to tell us about what he saw. Here’s what he says:

“I went to the Great Wall like all tourists do and I discovered Neckface tags on almost every garbage can I walked past. 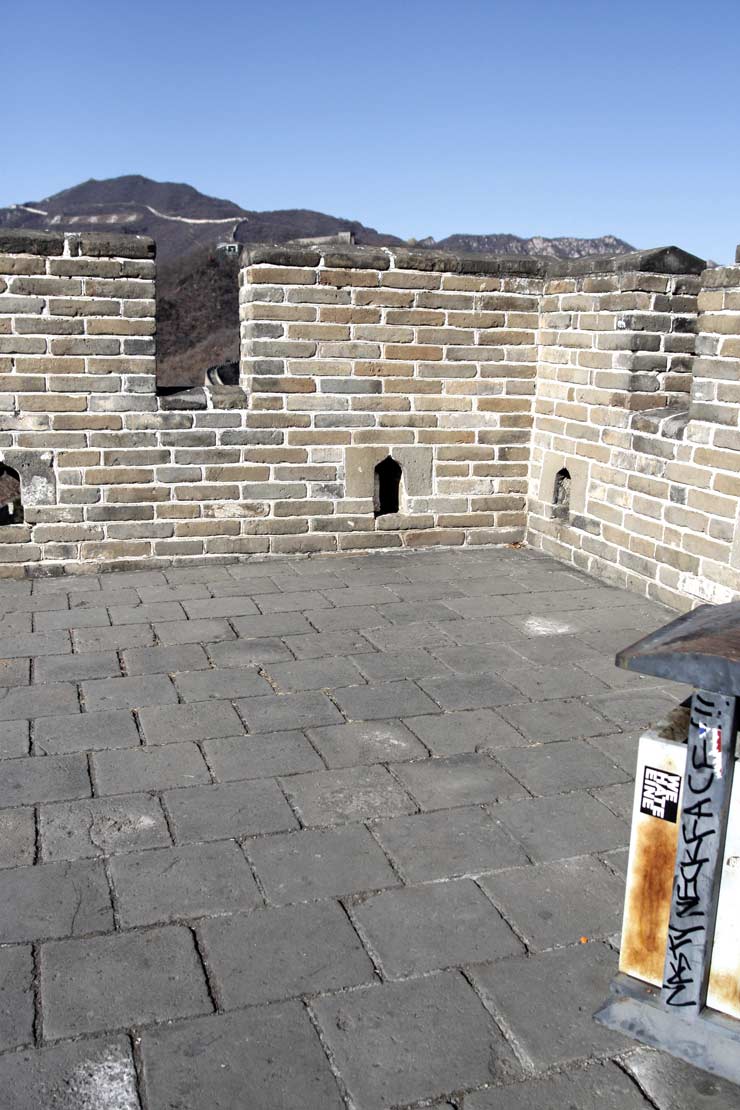 Nasty Neckface in Beijing one the Great Wall (photo © Blanco)

In comparison to Beijing, which seems bureaucratic like Washington DC, Shanghai seems to be a lot like NYC, with more going on culturally, massive apartment buildings sprouting up all over, and a lot of money running through it. 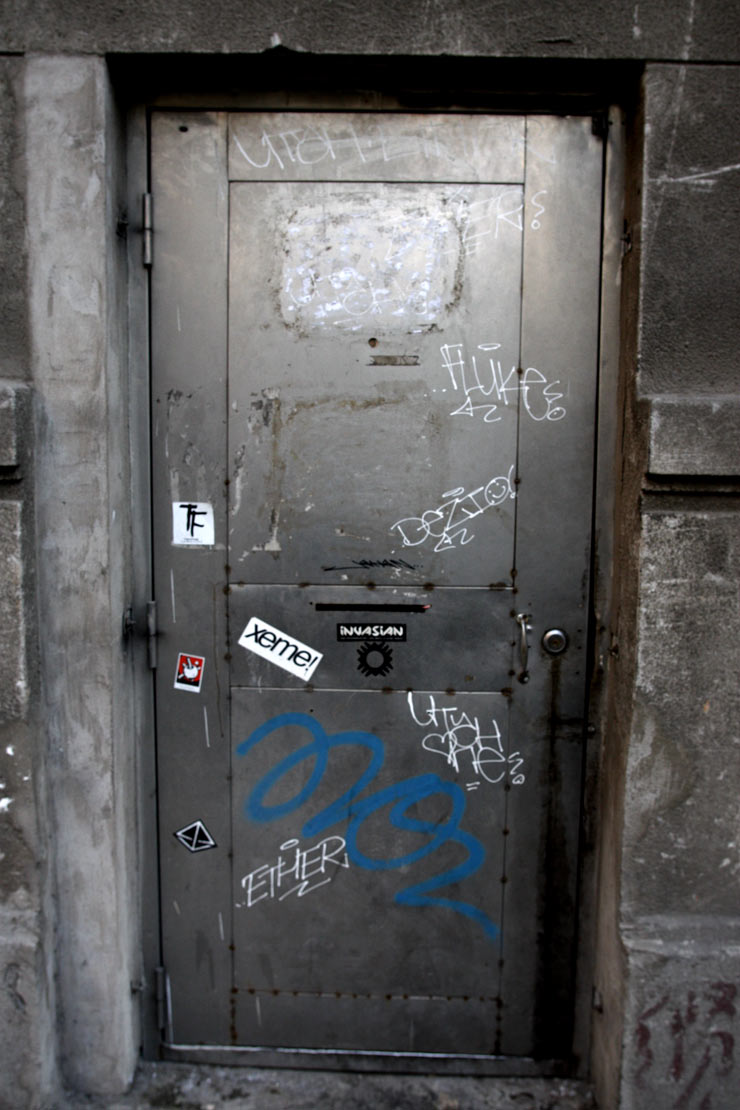 In Shanghai I went to the French Concession neighborhood  and I found a door with several tags from Utah and Ether, which made my day. It was kind of cool because I also found a Utah tag when I was in Rome three years ago and I don’t know Utah but just knowing that she is from NYC and has been in the same exact places as me is kind of comforting. 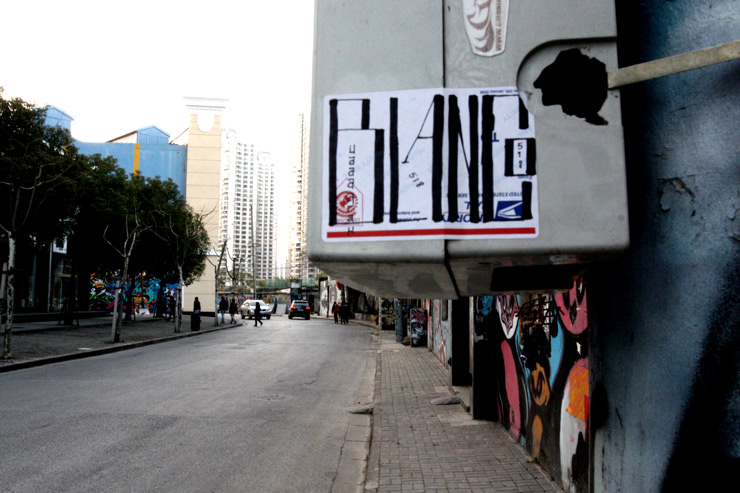 The next day I went to this art neighborhood that has a graff wall where it’s legal to paint and there were some pretty good pieces but I get a little bored with legal pieces. 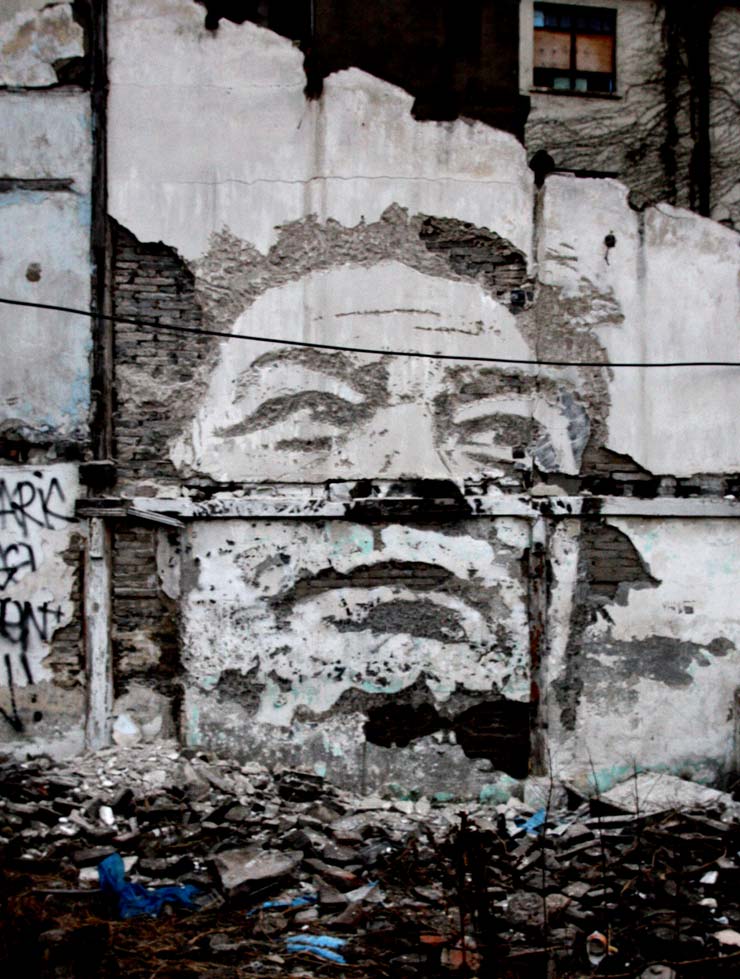 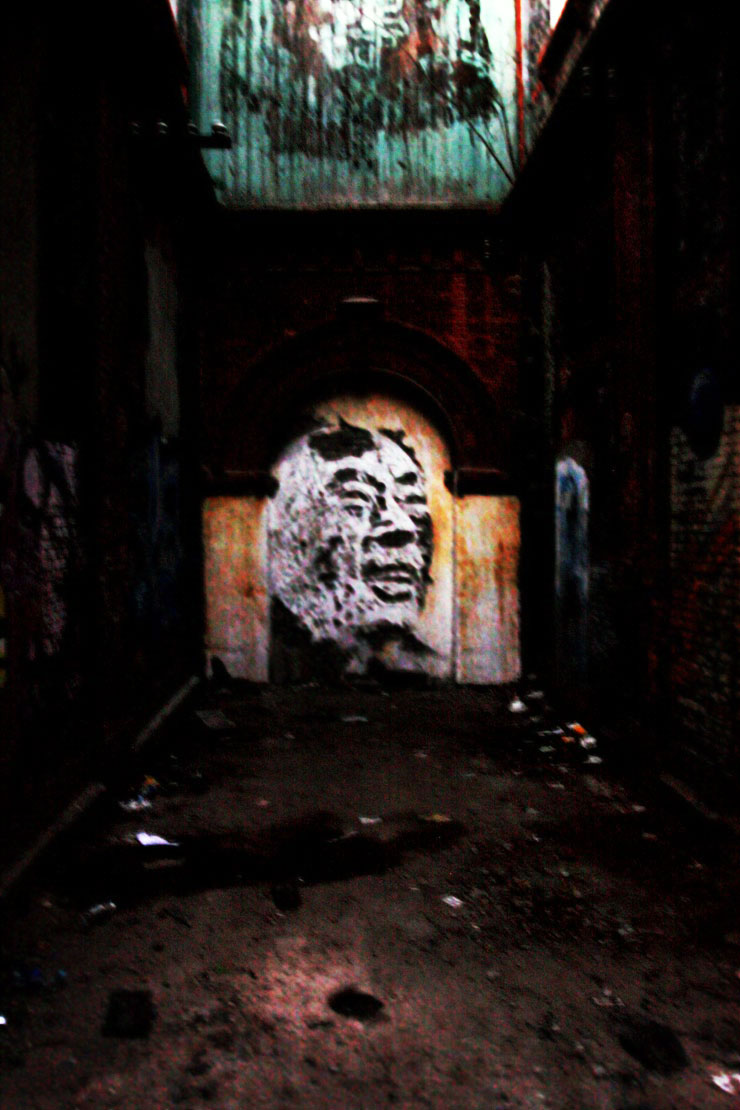 After some more walking I turned a corner and found an amazing piece by Vhils and a little while later, in a more secluded spot, I found a second Vhils piece. Unfortunately it is kind of blurry – I couldn’t get a great picture of it because it was getting dark and it was in a dimly lit hallway with only one exit. I was alone and I could hear someone moving on the second floor of the abandoned building so I took a couple shots before I got scared and left but both pieces were pretty cool.” ~ Blanco

Photos of 2020 : #13 : John Robert Lewis in Black and White
Happy Holidays to all BSA readers, your family and dear ones. We're counting down some of our favorite photos to appear on BSA in 2020 taken by our editor of photography, Jaime Rojo. We wish each per...
INDECLINE Creates QAnon Easter Egg Hunts in DC Parks for a Surreal Holiday Prank
The era of fractured attention spans, heightened emotions, and ravaged hierarchical systems for ordering institutions, beliefs, and the truth is ripe for examination and dissection - even if it takes...
Zio Ziegler: Using Intuition on the Street and In the Studio
Zio Ziegler opens his new show tonight in Oakland, CA and today on BSA we give you a full immersion in the “Intuitivism” that he is tapping into and channeling at the moment, as well a sense of his co...
The Many Faces of Lisbon on the Street
A Scholarly Eye On Artistic Interventions in Public Space The excitement that pours from city walls in Lisbon is palpable, an animated mix of graffiti, Street Art, murals, sculpture, and the tr...
BSA Film Friday: 07.02.21
Our weekly focus on the moving image and art in the streets. And other oddities. Now screening:1. HEREDITAS - Gonzalo Borondo2. HOTTEA "Aaron." Wooden Walls Project. Asbury Park, NJ.3. DRAGON7...
Beijing Blanco Brooklyn Street Art China Ether Jaime Rojo Neckface Shanghai Steven P. Harrington Utah Vhils