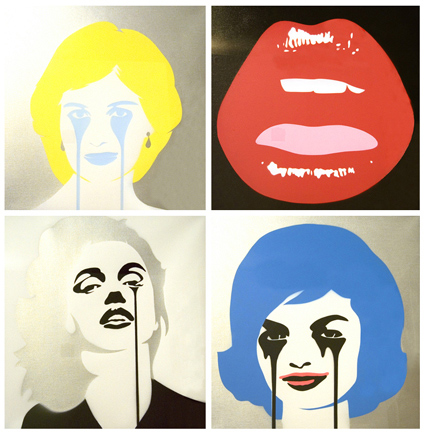 “The show is inspired by Warhol and Rosenquist and by the 60’s and is a departure from a lot of the street art based work I have been doing.. I was inspired by Warhol’s diaries and his manic obsession to paint beautiful famous people. At a certain point he realised that he had kind of lost the plot, and he was kind of losing ground to new school graffiti artists like Basquiat and Haring and they gave him the boot up the arse he needed.

I was inspired by an email I got from a copy village in China, they sent me a list of all the paintings from the world of art that they could reproduce for me and I was struck by the fact that they had distilled Warhol’s entire career down to 3 works, an electric chair, a Jackie Kennedy and a Liz Taylor.. All available for cheap ! A whole life that had been turned into 3 tiny thumbnails available to buy NOW. Warhol would have loved the joke. I decided to run with the idea and turn myself into a copy village .

Edward Albee’s film ‘Who’s Afraid of Virginia Woolf?’ starring Taylor and Burton brilliantly illustrates a nightmare couple who use alcohol to fuel anguish and emotional pain towards each other. I was amazed at the film and so I did a painting of ‘Richard Burton’s Nightmare’ / Liz Taylor’ and a print in 2 POP colourways and 2 months later, Liz died… Sales started to grow as the obituaries and TV specials morbidly repeated the same details of her life and her loves over and over again. “

The upstairs gallery will feature new works by UK artist Pure Evil. Inspired by Warhol, Rosenquist and the 60s, the collection entitled -Pure Evil Goes Pop!- is a departure from the artist$)A&Ps street art work and cel- ebrates Warhol&Ps obsession with capturing beautiful, famous people. Icon Elizabeth Taylor is immortalized in the painting -Richard Burton&Ps Nightmare,- created from a palette of strange hues with subliminal meanings.

-I have kept this whole collection of paintings very simple,- Pure Evil explains. $)A!]The features of the women are simplified down to the most basic lines possible, cut into three stencil layers with a sharp blade, and labori- ously sprayed to build up the faces. The eyes drip painted tears, the product of broken dreams of love.!\
The opening reception for -Pure Evil Goes Pop!- and -It$)A&Ps a Jungle Out There- by Eric Joyner is on Saturday January 21 at Corey Helford Gallery. The reception is open to the public, and the exhibition will be on view through February 8, 2012.

BSA Images Of The Week: 06.24.18
As upbeat as celebrations like today’s LGBTQ Pride events are here in NYC, they are rooted in defiance of the suffocating unjust norms that entrapped people in this city and across the country f...
Tahiti So Long : BSA X ONO'U Festival 5: Bora Bora
Last week BSA was checking out French Polynesia to get an appreciation for the Street Art, graffiti and street scene there while the 5th Annual ONO’U was taking place. BSA readers joined in the tropic...
'El Nolas' Diagrams the Modern Primitive at Parees Fest in Oviedo
Modern primitive expressionist Manuel García Fernández AKA ‘El Nolas’ was born in the mid-90s here in Oviedo, Spain. Now his autobiographical mixed-technique perspective is taking over some large pub...
Poles in Italy: Natalia Rak and Etam Cru at Memorie Urbane 2014
The Polish duo Sainer and Betz, who together are named ETAM CRU, have just completed walls at Memorie Urbane along with their countrywoman Natalia Rak, who comes from Lodz.  Together the illustratio...
BSA Film Friday: 11.15.13 - Exclusive Premiere David Choe / Aryz
Our weekly focus on the moving image and art in the streets. And other oddities. Now screening: 1. David Choe/Aryz PREMIERE on BSA: Medvin Sobio's "L. A. Nights" 2. Niels "Shoe" Meulm...
Brooklyn Street Art CA Corey Helfford Gallery Culver City L.A. Los Angeles Pure Evil