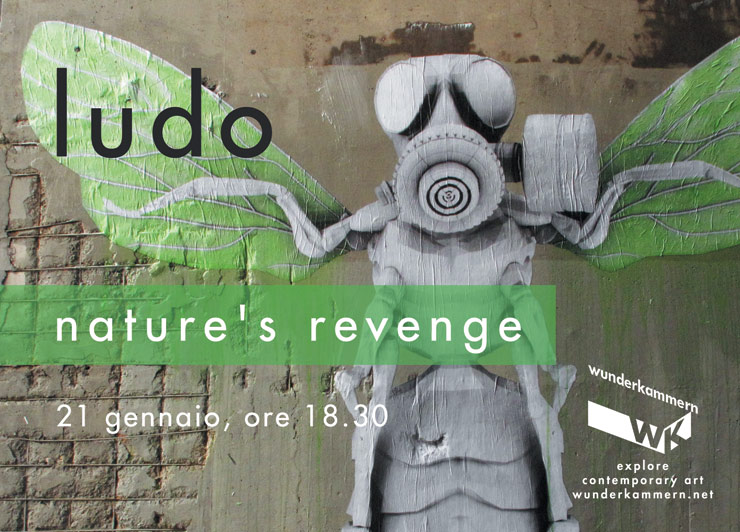 Wunderkammern presents the young urban artist Ludo for his first solo show in Italy,: nature, both magnificent and menacing, challenges humankind from the walls of the city.

On show in Rome from 21st January at Wunderkammern, where he is making his first appearance
in Italy, the young French artist Ludo is one of the most innovative and promising on the urban art
scene. He has left his mark in major cities throughout the world (Paris, London, Zurich, Oslo, New
York, Los Angeles and Chicago), with surreal and bewildering works that are perfectly integrated
with the context in which he places them.

Ludo’s creatures emerge from reassuring greyscale images blended with acid green that is poured
onto paper, sending out a message of humility for contemporary society. Elegant and vindictive,
the artist’s creations belong in fact to the series Nature’s Revenge and Bugs: plants and insects
drawn with botanic precision, which have evolved into mechanical, chemical and technological
hybrids as a way of defending themselves against people’s aggression.

With his latest series, entitled Co-Branding, major brands like Chanel, Dior, Calvin Klein, H&M and
Benetton are transformed into aggressive and inappropriate images that nonetheless seem
perfectly in line with the aesthetic canons of contemporary publicity, thus contrasting consumers’
inurement to bombardment by multinational brands promoting luxury and much more.

On the occasion of his exhibition at Wunderkammern, Ludo will present a series of works on paper
and canvas from the series Nature’s Revenge and Co-Branding, as well as sculptures created
specifically for the gallery. Images of a proud and haunting nature, where the aesthetic canons of
advertising are filtered by the artist’s ironic and mocking eye.

BSA Images Of The Week: 07.15.18
New York, New York, in the thick of summer. The heat is heavy with humidity, smells of hotdogs, marijuana, perfume, piss. The flat screen sunglasses now on every sweet face hide the glances and ...
POW! WOW! Taiwan 2014
The worldwide fascination with murals expanded this month to Taiwan for the first exhibit of Pow! Wow! Taiwan! from organizers of the very similarly sounding festival in Hawaii. Actually, looking at...
New Images from the Parees Festival in Oviedo, Spain 2018
A continuation of our Film Friday coverage from yesterday, today we bring you still photos of the murals created during this years Parees Festival in its 2nd edition. Rock Blackblock. Parees Festival...
Andreco: "Aula Verde" For Earth Day 2021 in Rome
Land artist, street artist, and scientist Andreco has given the Earth a gift of trees to celebrate Earth Day. Andreco. Aula Verde. Earth Day 2021. Rome, Italy. (photo courtesy of the artist) To...
Images Of The Week: 01.05.14
It's been weeks since we had an "Images of the Week" posting with you, due to the end of the year spectacular we presented  for 13 days; a solid cross section of the talented photographers who a...
Brooklyn Street Art Italy Ludo Rome Wunderkammern Gallery