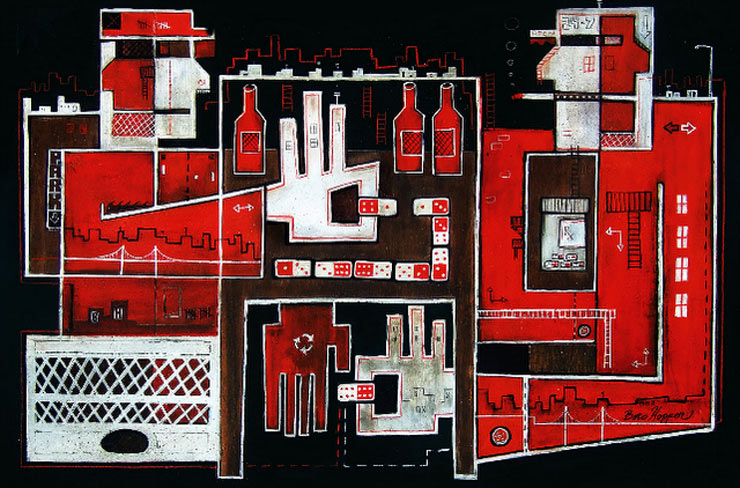 White Walls is pleased to present “Playground Tactics,” an intriguing collection of new works by Brooklyn-based artists Skewville, curated by Tova Lobatz. This will be Skewville’s first solo project with White Walls, with approximately 30 pieces and an installation that w…ill encompass and connect the Skewville style to the indoor space. The opening reception will be Saturday, January 14, from 7-11 pm, and the exhibition is free and open to the public for viewing through February 4, 2012.

As the artistic duo known infamously as Skewville, twin brothers Ad and Droo, gained recognition in the late nineties with their fake wooden sneakers tossed over telephone lines. While continuing a heavy presence in the public art forum since then, Skewville has also entered galleries with varying size of artworks on plywood, and a focus on installation. A constant source of the brothers’ inspiration is the New York City lifestyle- including graffiti, fashion, and urban expression. To create this urban experience, Skewville looks for mediums outside the canvas and paints on found objects with house paints.

“Playground Tactics” will feature large-scale and complex fine artworks themed around the old school city playground, a place where Skewville spent much of their time during adolescents. These city playgrounds set the scene for the artists’ young minds to flourish and experiment with worldly ideas and concepts. Skewville will use the playground to go back to the roots of exploration and translate that imagination into the gallery setting. Stylistally known for using urban materials, the brothers will not disappoint on that front, and may incorporate found objects and vintage toys from their past.

“The Ideology of Skewville came outta a crooked building filled with our collectibles and antiques we got at yard sales…hundreds of board games, lunch boxes, Star Wars, all that good stuff. We collected a lot of stuff that our mother ended up selling off at yard sales so as young adults we tried to buy back our childhood. We intend on using a lot of these oldschool items in the work and installations.

As twins, growing up with a constant playground companion always put us above the curve, but always being given a single identity (i.e. “the twins”) has always made us separately want to strive harder for our own style. Even as Kids we were always on a mission to change things up, from building club houses to making Slingshots while the rest of the kids were playing stickball. Still decades later we are still making art outside and playing with their environment, as well as still building sculptures, painting, and now printmaking and installations. Most people try to relieve their youth, while Skewville has maybe never let it go. So this random childlike energy that keeps evolving our aesthetic into new mediums has tactfully become known as the Skewville Style.”