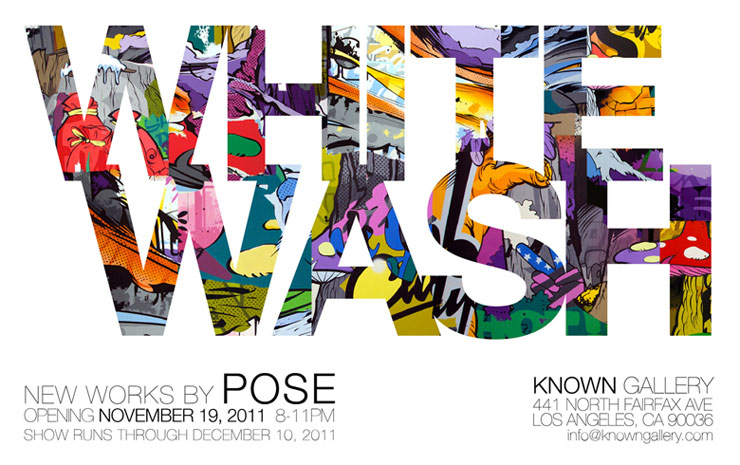 On Saturday, November 19, graffiti artist POSE and photojournalist KC Ortiz will unveil Whitewash, their second exhibition at Known Gallery, and their most cohesive to date.

With this exhibition, POSE will recall a time before the buff. “I am digging into my fondest childhood memories of riding the train and seeing all the colors, letters and cartoon characters along the lines. Making these paintings has been an incredibly rich process, and it makes me thankful that no city official can eradicate my memories.”

POSE will show 15 new works in the main gallery. The work is rendered in his signature style—aggressive, hand-painted collages of pop-culture icons and ephemera—but feature deeper abstractions and new mediums. “I have six paintings on Plexiglass that were kind of an experiment,” POSE explains. “I wanted to be challenged by a new medium and process.”

For KC, Whitewash is about the people and places he photographs. “Much of the work I do covers those who have been ‘whitewashed,’ so to speak, by history and policy,” KC notes. “Specifically, the work I will be exhibiting is from West Papua and Burma. You won’t find either of those ‘nations’ on the map, as both have been essentially ‘whitewashed’ away. Burma has been renamed Myanmar by its ruling junta in order to establish the fantasy of a unified nation, and West Papua has been occupied by Indonesia since 1963 after a very controversial handover from the Dutch that was orchestrated by the United States.”

In the project room, KC will show 12 photographs of West Papua and Burma’s armed struggles. “The struggles are unified in their nature under the theme of resistance, the victimhood of whitewashing by the world at large, the beauty of their people, and the strength of the human spirit and dignity,” KC notes.

POSE
Hailing from The Windy City, POSE has made an indelible mark on a multitude of cities around the globe. Best known for his progressive letter style and technical precision, POSE is an influential contributor to the contemporary graffiti movement, and his work has appeared in numerous magazines, books and films. POSE grew up a half block from the CTA’s elevated train line, and started sneaking out to practice graffiti there in 1992. Coming of age during the golden era of Chicago graffiti, POSE put in endless work on the streets. His prolific output led him to become a local legend, and the city’s most internationally recognized graffiti artist. In addition to his achievements in graffiti, POSE set out to conquer every medium visual art has to offer—both on and off the streets. His artistic exploration led him to become a jack of all creative trades, with successful endeavors in the commercial and fine art worlds. POSE currently lives and works in Chicago, Illinois. He is a member of the acclaimed West Coast artist collective The Seventh Letter, as well as a founder of his own Chicago based design and art firm We Are Supervision. He has traveled internationally on his own and with The Seventh Letter, specifically to showcase his skills as one of the best graffiti artists out there. Almost two decades into his artistic career, POSE shows no signs of slowing down.

KC Ortiz
KC Ortiz is an award-winning, self taught photojournalist with a split base between his hometown of Chicago, Illinois and Western Thailand. Ortiz’s work focuses on the world’s forgotten and overlooked people and issues. He has covered conflict throughout Southeast Asia, focusing on the human suffering and the policies that enable conflict, as well as humanitarian issues throughout the world. The aim of his photography is to bring awareness to the masses of those that are suffering most, often times completely unseen by the majority. His work has appeared in A-Magasinet, Global Post, Juxtapoz, Newsweek, Time, The Wall Street Journal, and many other publications across the globe. Ortiz’s work has been exhibited in a number of museums and galleries including The Newseum, The Corcoran, The Frontline Club, Known Gallery, Rivera and Rivera Gallery, Guerrero Gallery, and others. In 2011, Ortiz’s work was recognized with a first place award from the prestigious Pictures of The Year International.

JAUNE's Miniature Worker "Dudes": Nuart 2016
Brussels based stencillist Jaune says he "proudly created with his hands, his heart and sometimes his head," on his website and it looks like he has been using all three to place his little "dudes" in...
Adele Renault, BSA Wishes And Hopes For 2019
Adele Renault, painter of realistic portraits of pigeons and people, Street Artist, muralist, Belgian I've been feathering many nests this year but this pile of containers best represents the piles of...
Images Of The Week: 12.15.13
Here is our weekly interview with the street, this week featuring Ainac, Andreco, Axel Void, bunny M, Col Walnuts, FX Collective, Finbarr DAC, Killy Kilford, Kremen, LNY, Meer Sau,...
Labrona and Troy Lovegates Holding Up the Toronto Overpass
You ever wonder what’s going on under the overpass? People are holding it up, brother. That’s called people-powered infrastructure. Labrona . Other. Toronto, Ontario. 2015 (photo © Labrona) “I did...
Pine Tree Balls : A Public Art Recipe from Various & Gould
Overstuffed yourself with crackers and holiday cheeseballs? Why not try making some of these to burn off those extra calories? 3 Kings Day is in the bag and Christmas is a fading memory and we still ...
Brooklyn Street Art CA Kc Ortiz Known Gallery Los Angeles Pose