Bathed in the warm lucid glow that is the music of Pink Floyd, Bob and Chaz put finishing touches on their new New York show at Opera Gallery, compelled to sing along with two assistants while tightly touching up pieces with a brush or marker. The show is almost ready to be hung. On the sparkling white walls of this Soho gallery the everpresent LADS characters will be floating and cavorting throughout Manhattan space-scapes while handpicked celebrities, friends, and cultural icons bob into the frame. Among the active characters The London Police themselves are happily participating- like truly interactive players in their own pristine video game stills. After 13 years and 35 countries and a few personnel permutations, the LP lads are very happy to be making new art for you and having a bit of fun while doing it. 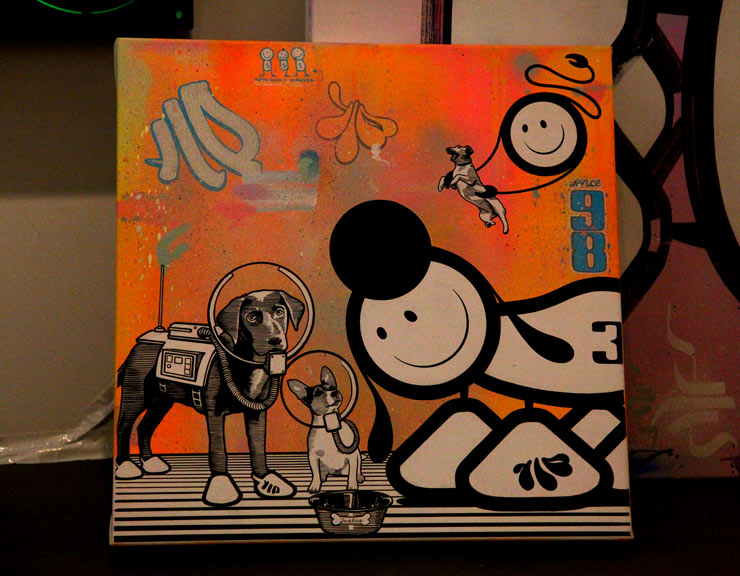 On the floor are stacks of completed paintings leaning against the walls, waiting to be framed. We’re not used to seeing their canvasses, large and small, with black simple and elegant wooden floater frames.

“We thought it would add an architectural element to the work,” explains Bob.

It’s quite usual for London Police to use the symbols and architecture associated with the city they are in when creating new works for a show, always in crisp linear black and white. What’s new this time is their use of color – employed here as washes of pastels, backdrops that evoke uneven city walls and incorporating graffiti tags; an homage to New York and their own roots. It’s the first time they’ve done color together on canvasses, and they are taking it slowly, happily. 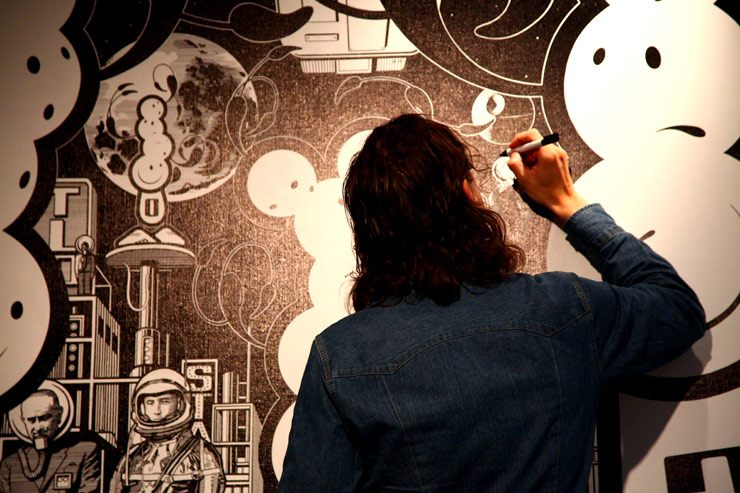 Chaz: I think the point is we always felt that there’s a whole world to explore. When we were ready to start with the black and white work we knew that once we opened  the door to the world of color it would be a whole new world there too. Such is the way in London Police. We take something and we try to explore it fully before we move on.

Bob: Slowly as well, not jumping in and go too crazy. We like a slow evolution. 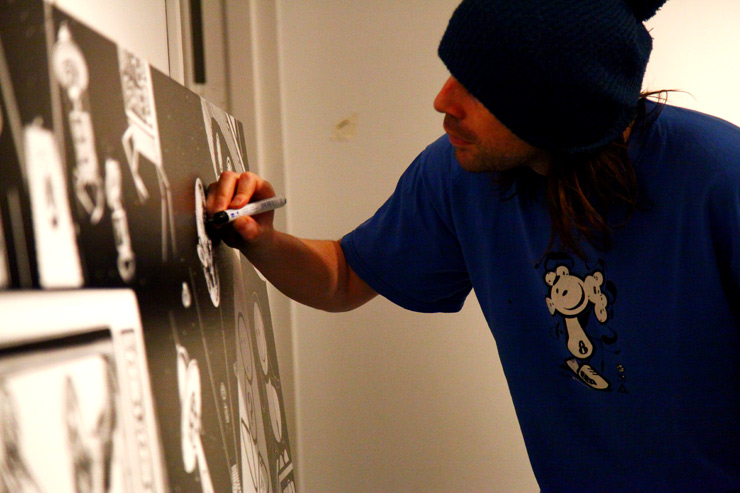 Chaz: It is not just that, it is also about exploring that which you have already. We haven’t even discovered everything we can do with black and white. Just holding  back so color does not overflow yet. We felt ready to go into color. It’s a big show. Erik from Opera called and say “hey guys we’d like to see something with color,” and we said to each other “we make mostly black and white, are you sure?” He said, “Just bring in a few pieces with color and let’s see what happens.” We are quietly pleased with the results. We’d like to take it further, explore it. We’d like to dive in.

Bob: It does not mean that if you are doing a big show you should lose control and say, “Oh yeah everything should have color. Loud and bigger.” We like the black and white because I think we can leave it in itself in a few things.  Just like Chaz said we have not yet explored it fully. To be honest, with the color works, we just wanted to have fun.

Brooklyn Street Art: The colors are muted, pastels.
Bob: Yes the palette is muted in all the works with color simply because we like nothing to fight against the black and white subject. You never really see dark blues. We didn’t want to do a black and white and colored in some big scene. We felt that we wanted to try a different approach with the color, not drastically different.

Brooklyn Street Art: So the color in this case serves as a background?
Chaz: Yes like wallpaper.
Bob: The color gives some sort of a context to the characters. These swirls that Chaz makes are like tagged over. These layers on the canvas give the same context that the street gives – it’s a reference to the street.

Chaz: It is like graffiti really – specifically New York doorways always inspire me. There’re doorways around the world that are tagged but with New York doorways, there is that beauty in seeing 50 tags on top of each other, wheat-paste being thrown off and a tag on top, and then stickers. These doors are rich with life. That’s why I always feel sort of romantic about graffiti.

I know that there’re a lot of people that have said it but I concur that I’d rather see a bunch of New York’s throw ups on a rooftop than a full commissioned color piece that is nice…in a way it says more when you see stuff on the street that is raw. Because we have not done so much stuff on the street in the last few years – we have been doing gallery work it is nice to revisit that style and hopefully, by doing a show like this we might make enough money that we can take a few months off and do other projects, get back on the street and work on other things. 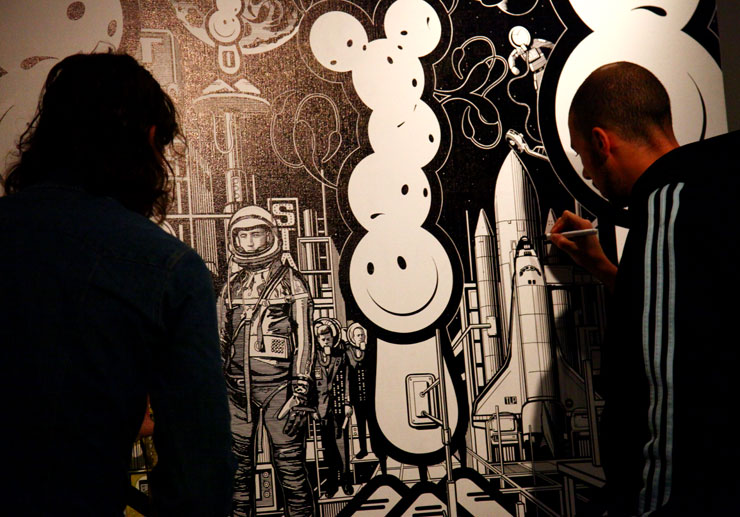 The London Police. Bob and an assistant putting the final touches on a piece.  (photo © Jaime Rojo)

In addition to incorporating color, there are a number of languages being bandied about on these new pieces; new scripts and characters – their curvilinear characters bold and swinging, sharp and smart in the whirling pieces of New York City, seemingly placed by the settling of a shaken snow globe. The appearance of other languages is again appropriate for the melting pot that is New York, but what does it say?

Brooklyn Street Art: Here’s a new color piece with the Statue of Liberty on the foreground. Can you talk about the words written in Arabic?
Chaz: There are different languages. We have the gift of Google Translate. We translate The London Police into every available language that has a different alphabet and different fonts. Being that we are two people and that I mostly work on the characters it is a way for me to really enjoy another part of art. Making all these different fonts and enjoying different languages. I like it a lot. That’s one of my things to do. Bob does everything else.

Bob: (in jest) I don’t like it personally but I’m glad he is happy.
Chaz: He just wants to see me smile.

And The London Police want to see you smile, so they are planning a number of twists on the typical gallery opening tonight in hopes that you’ll break out in a big LOL, and sing from the choirbook; 17 songs about dogs that will be handed out at the event. Included with the charismatic Abner Preis performing, telling stories, and changing his voice. Additionally, there is some talk about the dog singers.

Brooklyn Street Art: What about the performances we’re hearing about at opening night?
Chaz: We are going to sing 17 songs about dogs… It is The London Police Dog Singers and a surprise guest appearance will be singing with us as the back up singers.

“It takes off the serious edge off the gallery art show because it is a little bit too serious some times,” says Chaz. “This is what is so special about making performance and making art: It is pure entertainment. If you are going to worry about what people think about it if they like it or not you are thinking wrong in my opinion.” 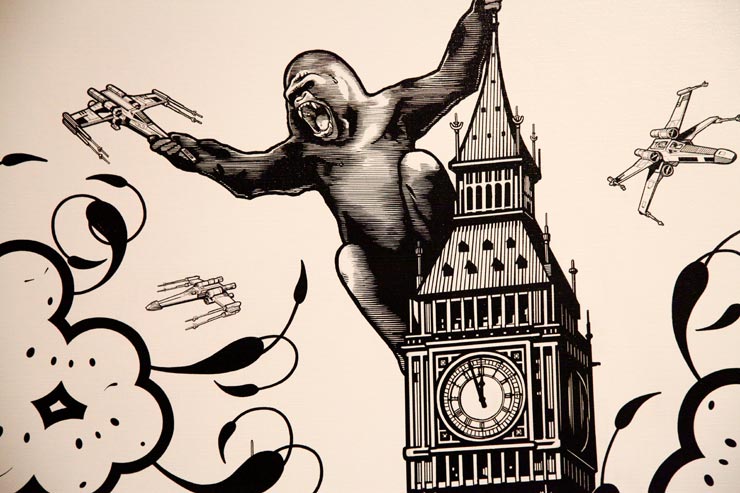 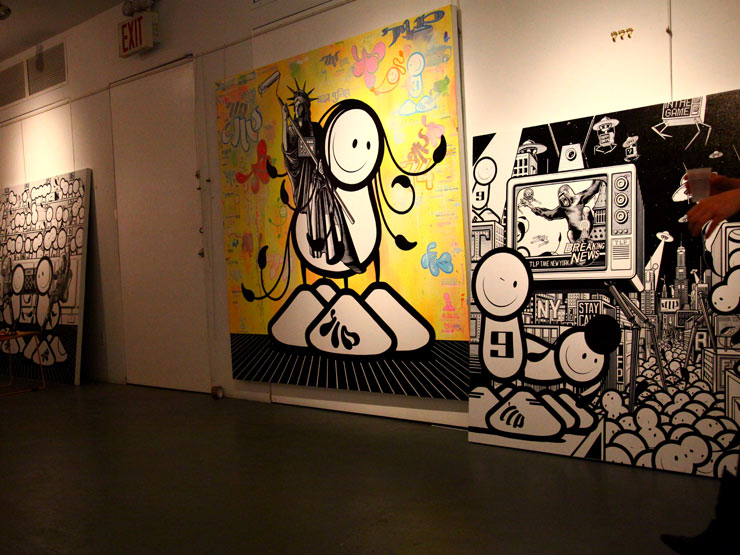 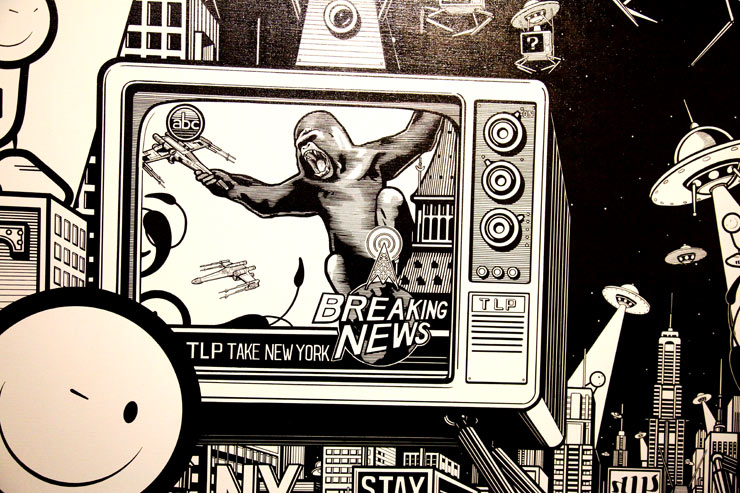 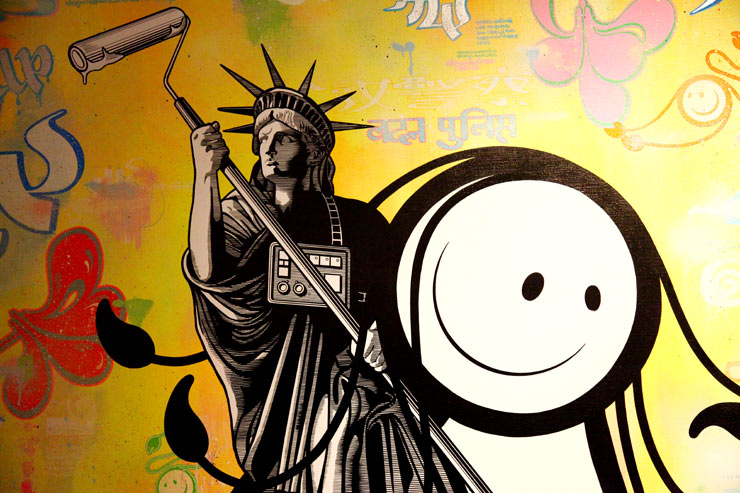 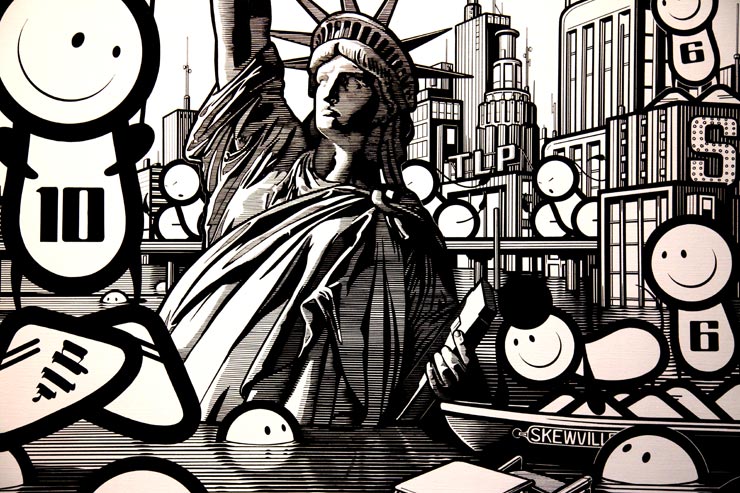 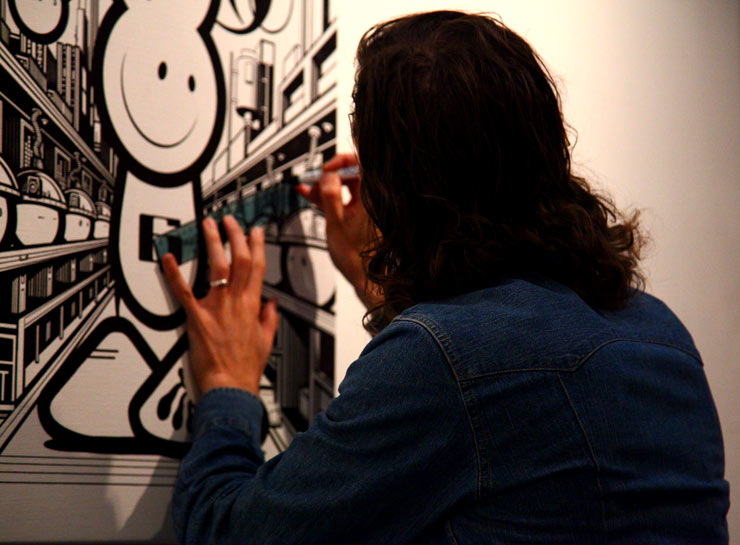 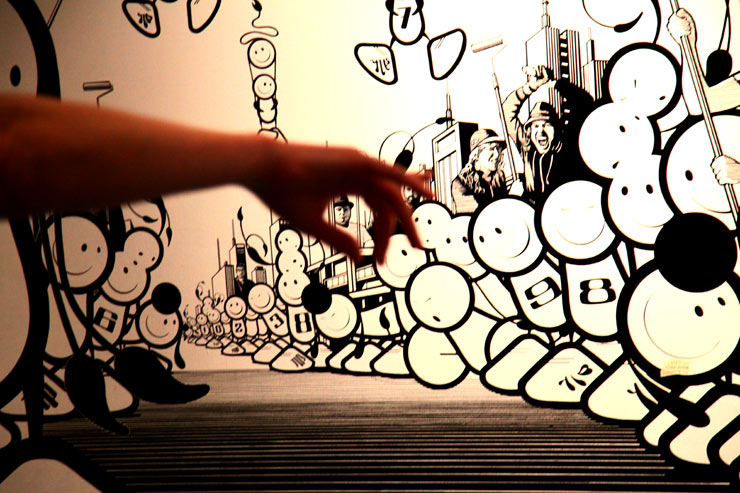 Looks like the Thanksgiving Parade is about to start. The London Police. Detail (photo © Jaime Rojo) 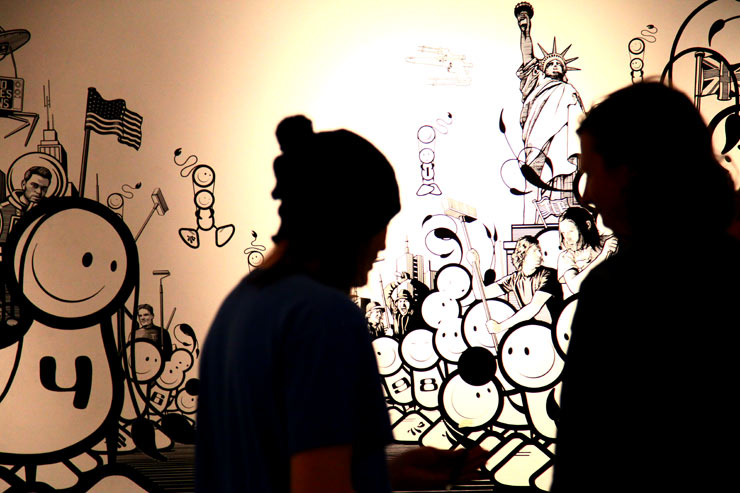 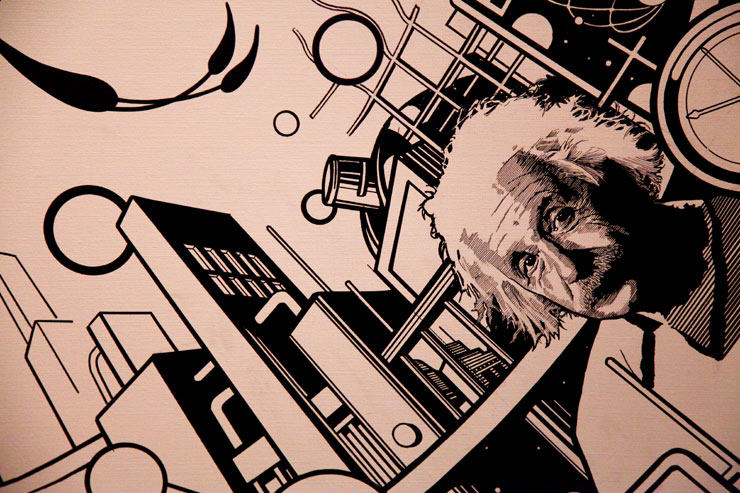 Mr. Einstein peers back at you from this new canvas by The London Police. Detail (photo © Jaime Rojo) 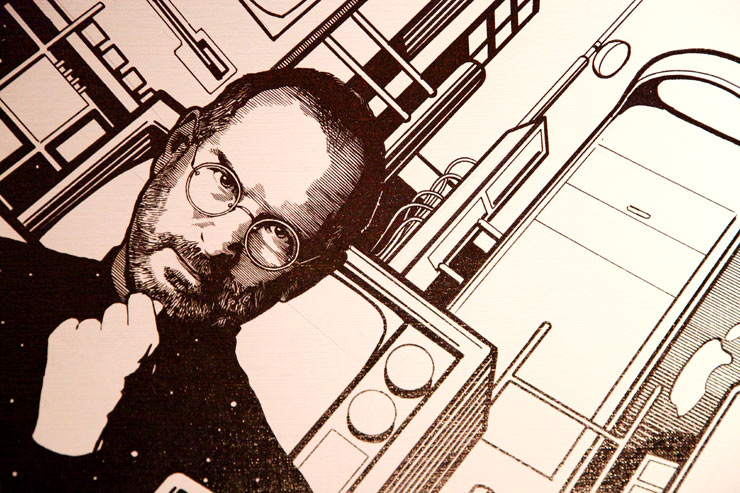 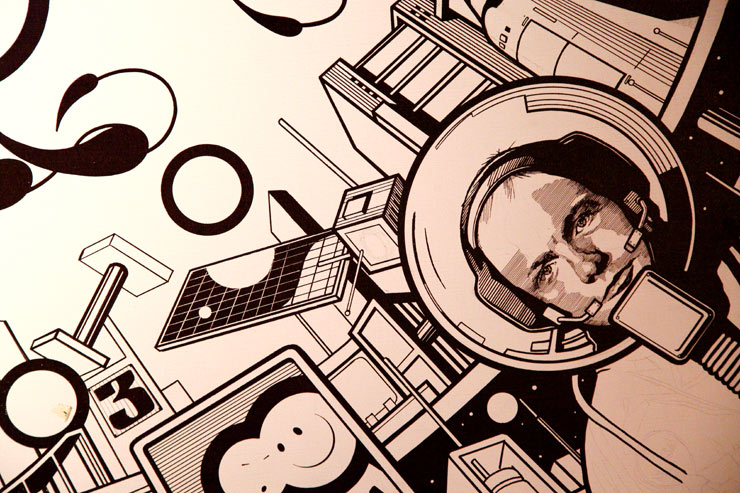 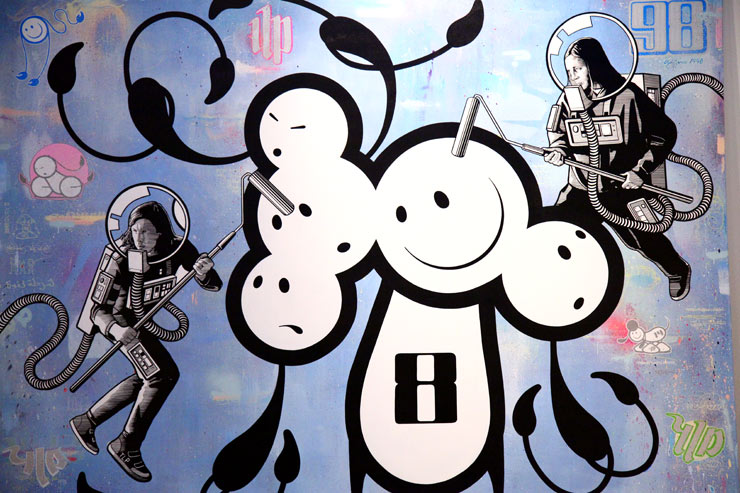 The London Police floating in full color through a galaxy of tags. Detail (photo © Jaime Rojo)

BD White Flies Into Space With Astronauts for "Love, Loss and Longing"
Street Artist BD White has always been intrigued by the life of astronauts - so much so that he has them tattooed on his arms. Their desire for adventure, the solitude in space, and their storied long...
ASHOP CREW In Sacramento, via Jim Prigoff
Montreal’s ASHOP crew is a complete team of talented writers and painters who can handle the commercial jobs – but when it comes to having fun they just want to hit the wall with their own stuff for ...
BSA Film Friday 02.01.13
Our weekly focus on the moving image and art in the streets. And other oddities. Now screening: JOSEF KRISTOFOLETTI: The Atlas Detector, FAITH 47 - Fragments of a Burnt History, and T...
BSA Images Of The Week: 10.16.16
It's been a spectacular amber and golden and green autumn week when you're able to ride your bike around and see a lot of great new and old Street Art and not break a sweat because the...
BSA Images of the Week 01.13.19
Here's our weekly interview with the street, this time featuring Abe Lincoln Jr., Alexis Diaz, Brian Alfred, Celso, City Kitty, Cranio, Deih XLF, Diva Dogla, Dog Byste, Fales, Gane, Jenna Morello, ...
Brooklyn Street Art Jaime Rojo Manhattan NYC Opera Gallery Pink Floyd Statue of Liberty Steven P. Harrington The London Police