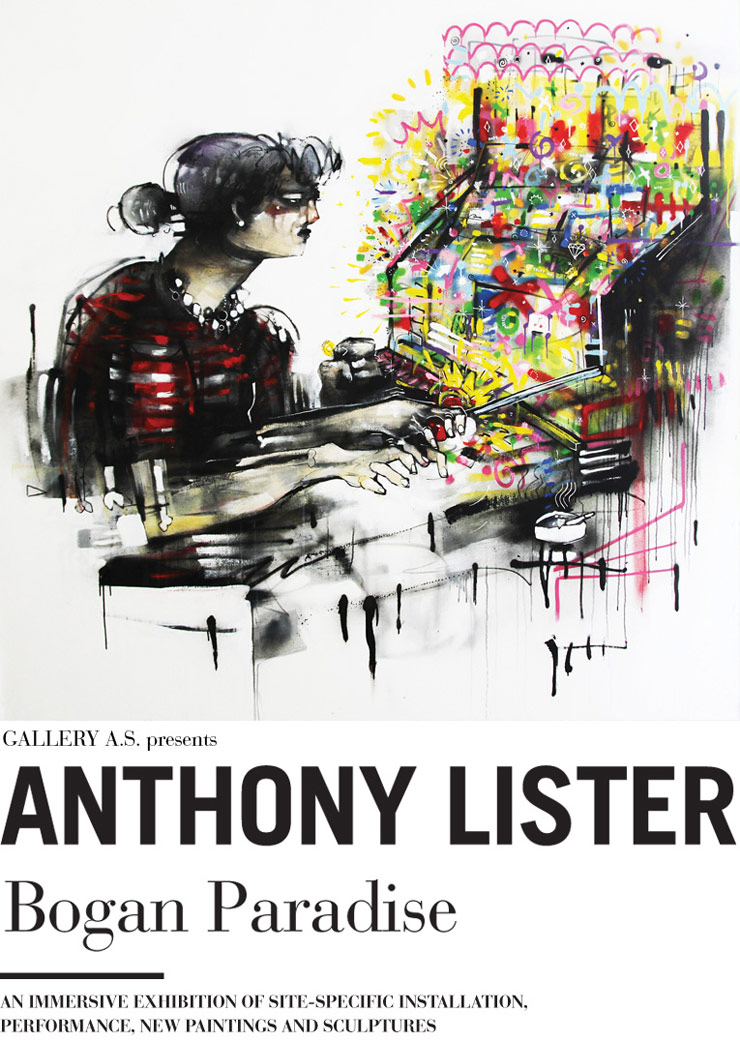 As the launch event is limited capacity we will not be able to accommodate everyone.
If you would like to attend, it is essential to register interest at rsvp@gallery.as

Bogan Paradise challenges conceptions of the Australian identity – those attributes perceived as both positive and negative. Euphemisms amount in the Australian vernacular to champion the quintessential Australian larrikin – a character that most other cultures would bluntly disregard. It’s the ‘she’ll be right’ laid back attitude that we exonerate as while we consent to and discount irresponsible acts.

Lister investigates the underside of such a responsibility-free society. We witness several incarnations of the ‘victimless crime’, a ‘no worries’ attitude to a future too far off for retribution – pissing in public, Mum smoking a bong, swearing at the televised footy match, burn-outs on the oval, amoral Queensland cops, desecration of wildlife, motorcycle gangs, and other petty misdemeanors as well as a few more personal crimes such as the home-made tattoo in the garage, sun-burn, a terrible haircut, an unhealthy obsession with sports or celebrity magazines.

Social commentators have oft questioned the larrikin streak in Australian culture, and have theorised about its origins. Some say that larrikinism arose as a reaction to corrupt, authority during Australia’s days as a penal colony, or as a reaction to norms of propriety imposed by officials from Britain on the young country and such disdain for arbitrary authority a reaction to of the often conservative norms of bourgeois Australia. What cannot be argued is that the larrikin is an important part of our culture and has emerged repeatedly, informing Australian contemporary art, popular and youth culture and political debate.

Bogan Paradise will be held in the top 3 floors of a dilapidated heritage listed, discreet George St Building. The convergence of Lister’s vision with this early Sydney building and recently de-zoned sex shop presents a unique context for Anthony to amplify his themes of wayward Australiana. The space will exist as several involving environments as a rabbit-warren of surprising installed, performative and interactive rooms.

Anthony Lister is a trailblazer with an international following and a general disregard for borders. A prolific street artist and painter Lister has managed to marry the empathy and abjection of 20th Century figuration with the irreverence of the contemporary pavement culture. His work shows a genuine affection for the human body, and also a tender understanding of the ways in which the demented, destructive, playful and powerful collide and coalesce.

Anthony Lister was born and raised in Brisbane, a metropolitan center and capital of Queensland, Australia. In 2001, he earned his Bachelor in Fine Arts at Queensland College of Art, and in 2003, moved to New York to continue his education under the tutelage of distinguished abstract painter and New Zealand native Max Gimblett.

He has since shown in solo and group exhibitions all over the world in commercial and institutional galleries, art fairs and prizes alike. His work is held in many collections of high esteem including the National Gallery of Australia and the BHP collection.

Gallery A.S. is Joseph Allen Shea‘s site-specific exhibition project. It’s vision is to create marriage and/or discord between architecture and contemporary art to bring interest and vigour to Sydney’s art and cultural domain.

BSA Film Friday: 01.24.20
Our weekly focus on the moving image and art in the streets. And other oddities. Now screening : 1. "Gestures of Caring" Jan Vormann2. Drones Printing Walls, Stop Us if You've Heard This One....
BSA HOT LIST: Books For Your Gift Giving 2020
It's that time of the year again! BSA has been publishing our "Hot Lists" and best-of collections for more than 10 years every December. In this year that has been so heavy and difficult for many...
"PasteUp Festival" Brings 130 Voices to Berlin Walls
We start here with a fresh paste-up directly from Iran. It depicts the entrance to a mosque bathed in a jewel reddish haze. The lower half of the door contains a cryptic message in the three-dimensi...
13 from 2013 : Ray Mock "Kuma by the Water"
Happy Holidays to all you stupendous and talented and charming BSA readers! We thank you from the bottom of our socks for your support this year. The best way we can think of to celebrate and comm...
Unusual Art Installations in Toulouse Refugee Camp: "Creve Hivernale II"
“Over the period of two months all the artists intervened on the site illegally and wanted to live in the same conditions as the refugee families,” says artist and journalist Sandra Butterfly as she e...
Anthony Lister Australia Brooklyn Street Art Gallery A.S. Sydney