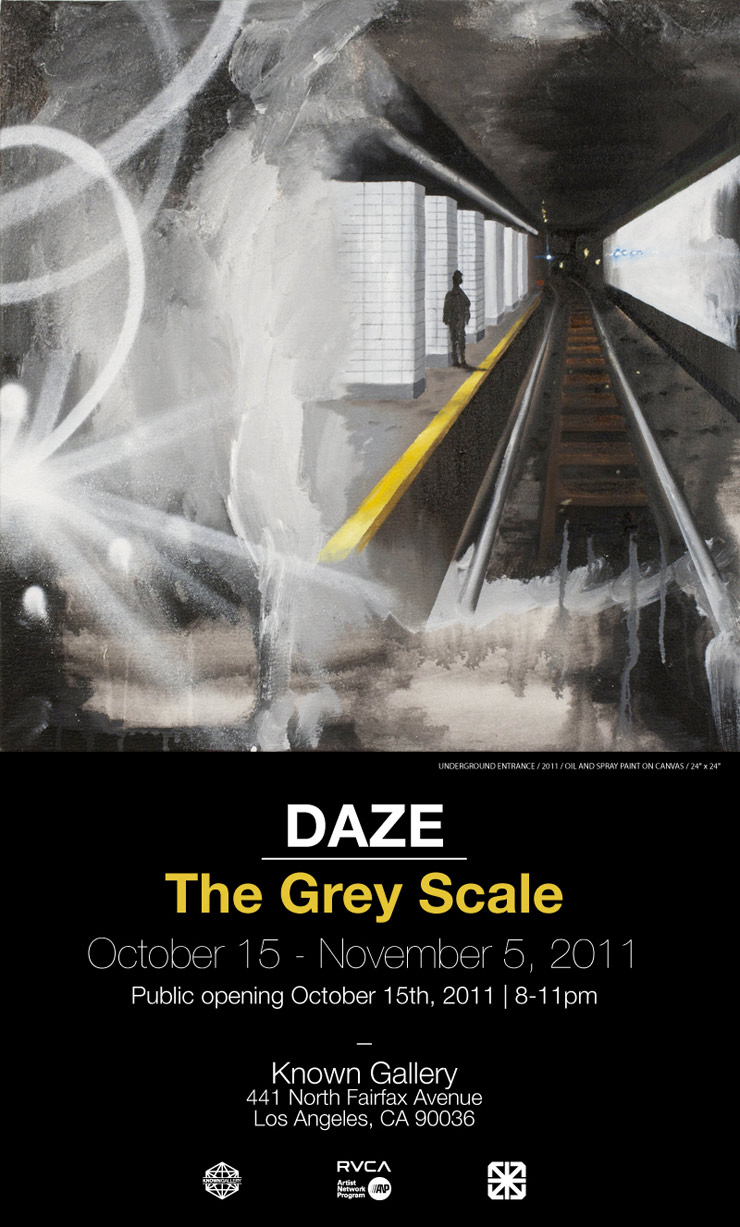 The Grey Scale Paintings
Walking along what seemed like an endless series of tracks my senses became accustomed to the dark labrythiniun tunnels that lay below. My eyes adjusted to the darkness and my ears acclimated to the endless series of subtle noises. Dripping water, the squeal of rats chasing each other, the release of train compressors, the clicking of the tracks as a train approached the next station, then, all at once, the roar of a passing train echoing through the tunnel, and then, silence.
This new series of works entitled “The Grey Scale” is an exploration into the context in which many of my subway works were created. Walls layered with years of tags and signatures, gravel floors covered in dust and debris, flickering lights, and the gleam of sharp steel tracks piercing the darkness are all portrayed in the context of subterranean tunnels that lead to nowhere. This is a world in which we are encouraged to stay away from the light at the end of the tunnel. These new works call to mind some of the layered complexity of Rauschenberg’s early black paintings or perhaps the subtlety of Cy Twombly’s blackboard paintings. Others yet clearly show references to the gritty urban landscapes of the New York ash can school: John Sloan, William Glackens, Robert Henri, and later most of all, Reginald Marsh. These artists chose, as I do, the streets as their primary source of inspiration. The paintings are a kind of hybrid that draws from the vocabulary of both the graffiti world and urban realism.

Happy Thanksgiving From BSA
Best wishes to all the BSA Readers today as we celebrate Thanksgiving - filling our hearts with gratitude for your support and our stomachs full of turkey. Except for the vegetarian in the family, wh...
Bom.K x Moniker x BSA
In advance of Moniker in Brooklyn this May, we are interviewing some of the artists who are influenced both by street practice and fine art as the contemporary urban art category continues to evol...
Remi Rough Painting Pride Abstractly in The Bronx
“This one goes out to the whole LGBTQ community!” says Street Artist Remi Rough as he finishes his first of two brightly abstract and geometric installations here in NYC over the last couple of days....
BSA Images Of The Week: 04.23.17
Boom! There it is! This is springtime and there is a lot of new stuff popping up like tulips and out like cherry blossoms. If you didn't get to the Martha Cooper opening at Steven Kasher gallery...
Stencils of Protest: Street Artist Sajjad Abbas and Youthful Voices of Baghdad
Amidst the fusillade of news from the Middle East these days, you may have missed that the young people of Baghdad in Iraq have been demonstrating in the streets against the government. They are figh...
Brooklyn Street Art CA Daze Known Gallery Los Angeles