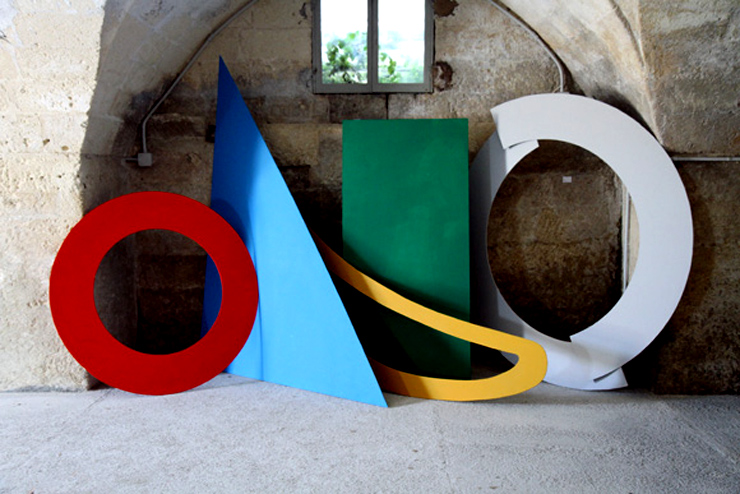 MOMO for FAME Festival (photo courtesy of the gallery)

Space 1026 is excited to present an exhibition of new works by Amber Dubois, Steven Riddle and MOMO. The work of these three painters eschews figure – instead exploring traditional issues of abstraction. Through their use of color, shape and form – each in their own distinct but related mediums of painting, collage and sculpture respectively – these three young American artists bring their unique vision to this storied tradition. Please join us for an opening reception with the artists Friday, October 7th from 7:00 – 10:00 pm at 1026 Arch St. in Philadelphia.

Amber Dubois creates paintings that explore the confusing and violent act of creation. Using varied ways of applying paint, she builds layer upon layer of cacophonous and conflicting information to build mass, and an almost ‘figural’ presence in the paintings. Born and raised in Philadelphia, Amber Dubois received an MFA in Painting from the New York Studio School in 2007. She is now based out of Brooklyn, NY and most recently has exhibited at Vox Populi and AxD Gallery, Philadelphia.

Steven Riddle, born in 1982, makes collages using handmade source materials, made with screen printing, monotypes marker, acrylic, airbrush, spray paint and bleach. Studied at the Maryland Institute College of Art, Currently an MFA candidate at Towson University, he lives and works in Baltimore. Steven has shown his work at the Andy Warhol Museum, Current Gallery, Together gallery and at Nudashank. He dreams of one day living in a house with a kidney shaped swimming pool

MOMO is known for thoughtful post-graffiti: experiments include tagging his name a tag the width of Manhattan, over-sized outdoor collage, tide powered sculpture, a computer script which makes his art for him, and prints, paintings, and videos that rely on chance and context for fun and substance. Born in San Francisco, he has traveled most of his life, discounting six years New York. He joined a graffiti crew in 1999 while living in Spain, found his use of color while employed in the Caribbean, and fell for outside art while living outside: in a cave for a year, in a truck for a year, and in a tent for a year.

Spaik and Libre Collabo Mural in Mexico City
A collaboration between two Gen Y Mexican muralists went up this month for college age festival goers at an electronic dance event in Mexico City that features multiple DJs, carnival rides, laser ligh...
Etnik in Pisa for Indoor/Outdoor, 25 Years After Haring (Italy)
Marking a quarter century since Keith Haring created his mural on the back wall of the Servi di Maria convent beside the Church of S. Antonio in 1989, the city of Pisa began Indoor Outdoor - Arte Urba...
Karl Addison in Moscow: The Fisherman and the Depleted Sea
Karl Addison was in Moscow recently for the MOST art festival and based his mural on a Russian fairy tale by Alexander Pushkin entitled The Fisherman & The Fish, written in 1833.  “The mural is a ...
James Marshall DALEK "The Redistribution of Destruction"
A quick look at new works by James Marshall aka Dalek for his show, “The Redistribution of Destruction”. His bright colors and geometric op art is bent through the lens of Murakami and yet glows occas...
BSA Images Of The Week: 09.11.16
It's the 15th Anniversary of 9/11 in New York. It will be a quiet day for us. We hope. So, here’s our weekly interview with the street, this week featuring Bast, Elian, EQC, Hama Woods, MCA, M...
Amber Dubois Brooklyn Street Art Momo PA Philadelphia Space 1026 Gallery Steven Riddle