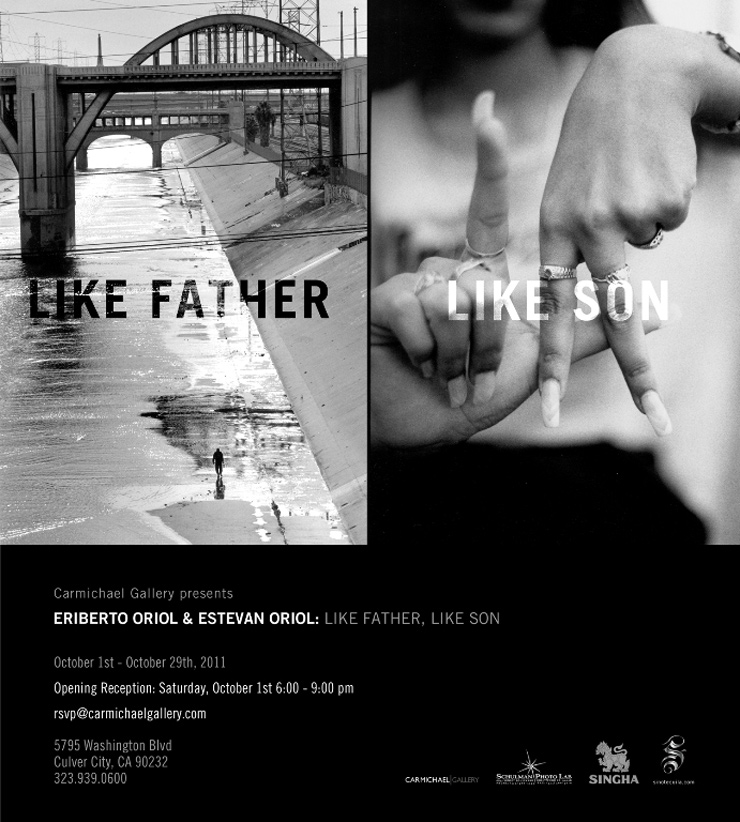 Carmichael Gallery is pleased to announce Like Father, Like Son, a retrospective survey of works by renowned Chicano, Los Angeles-based father and son photographers, Eriberto and Estevan Oriol. The exhibition will comprise twenty-five limited edition prints from each photographer, including black and white, color, silver gelatin and digital c-prints.

Whilst often distinguished by a complex melange of memory, emotion and intimacy that can manifest itself in equally terrifying and wonderful forms, the relationship between a parent and his or her child is a particularly unique human exchange and can hardly be defined in generalized terms. For Eriberto and Estevan Oriol, who are often cited as two of the most important contemporary documentarians of urban, hip hop, lowrider and Latino culture, the deep familial tie they share extends into and only serves to empower the unique nature of their professional relationship and the intense puissance of their work. Whether viewed together or apart, the Oriols’ photography presents the multitudinous contours of Los Angeles and urban life through a piercing, visionary lens that lends a fascinating, almost hyperreal layer to the earthy, often confrontational authenticity of their subject matter.

Perhaps one of the most interesting aspects of the Oriols’ oeuvre to date when considered as a whole, as in Like Father, Like Son, is its ability to complement and contrast the talents and purports of each photographer. Both are long-time observers of city life and the experiences of its inhabitants; Eriberto, whose understanding of shape, line and shadow are key features of works such as LA Financial District, 2011, The Thinker, 1974, and Need A Helping Hand, 2000, which define with gut-wrenching elegance the struggle and strength of the poor and homeless in Downtown Los Angeles and San Diego, form an effective and deeply affecting concordance with Estevan’s depictions of these communities, who, in works such as Skid Row Body Bag, 2009, Chestnut Family, 1998, and Pepper’s Shopping Cart, 2011, combines brutal honesty with rich sagacity to uncover a subtle, fleeting beauty that might otherwise have disappeared unnoticed.

Other series represented in Like Father, Like Son include the photographers’ varied and illuminating portrayals of LA’s lowrider culture, dramatized to distinction in Eriberto’s color photograph Las Vegas Lifestyle Car , 2004, and the city’s gang life, exposed in a singularly vulnerable light in Estevan’s Bullet Holes and Stab Wounds, 2002, and Shaving the Dome, 2008. In addition to these and Estevan’s portraits of celebrities, including Dr. Dre, Ice Cube and Dennis Hopper, both Oriols will present a selection of their exquisite, oft-touted photographs of LA women, from Eriberto’s Traffic Jam 110 FWY, 2011, to Estevan’s Erlinda, 2003.

There will be an opening reception for Like Father, Like Son on Saturday, October 1 from 6 to 9pm with both Eriberto and Estevan Oriol in attendance. The exhibition will run through October 29, 2011.

Born in Indio, CA, Eriberto Oriol grew up in the San Diego neighborhood of Barrio Logan before relocating to Los Angeles, his home now for over three decades. In addition to expanding his internationally recognized portfolio of photographs of LA Latino street life, street art and graffiti, a talent he would later pass down to son Estevan, he and wife Angelica Gonzalez-Oriol are enthusiastic, proactive supporters of the local art scene, which led them to curate the first major exhibition of graffiti art in Los Angeles in 1989. In addition to the recognition the Oriols received from the Los Angeles City Council for the show’s contribution to the community and the praise from numerous media outlets, The Museum of Contemporary Art, Los Angeles acquired a featured artwork for its permanent collection.

From hip-hop club bouncer to tour manager for Cypress Hill and House of Pain in the late 1980s and early 1990s to the internationally celebrated professional photographer, director and urban lifestyle entrepreneur he is recognized as today, Estevan Oriol’s talent, fame and success only continue to grow. 1992 saw the beginning of what quickly grew to be an influential relationship with best friend, fellow Soul Assassin associate and now world-famous tattoo artist, Mister Cartoon. Together, they created the increasingly lucrative and high-profile Joker Brand Clothing, just one of Estevan’s ventures in the clothing industry, which range from Not Guilty, produced with Everlast, and his solo line Scandalous to his eponymous line with Upper Playground. In 1995, however, Eriberto gave his son a camera, and what began as a means of capturing life on tour led to a career that has snapped up images of everyone from gang members and graffiti artists to hip hop stars and Hollywood celebrities.

Images of The Week: 09.22.13
First day of Autumn, Yo! And we have been harvesting images for you as we enter the new season in NYC. Here is our weekly interview with the street, including CAM, Dasic, Icy & Sot, ILL, Jessi...
BSA Picks for Bushwick Open Studios 2014
So Summer is officially here and with it comes Bushwick Open Studios (BOS) - in fact close to 600 venues are opening their doors for the next 3 days and you are encouraged to just wander the streets...
Kara Walker and Her Sugar Sphinx at the Old Domino Factory
Refining, as Creative Time's Chief Curator Nato Thompson reminds us inside this 30,000 square foot former Domino Sugar facility, is a process whereby coarse cane is decolorized, and brown is turned po...
Jef Aerosol in NYC, "Black is Beautiful"
Jef Aerosol, the French master street stencilist for over 3 decades was in NYC this week. He took part in a couple of commercial events and to visit other Street Artists shows and events like Nick Wal...
Calligraffiti Runs Through It : "Einen Tag lang Fur Immer" in Berlin
A tiny gallery pop-up show at Zwitxhermaschine Gallery in Berlin quickly illustrates quite literally the narrative that is often on the street between different pieces and players. In this case the...
Brooklyn Street Art CA Carmichael Gallery Culver City Eriberto Oriol Estevan Oriol L.A. Los Angeles