With Marketplace Gallery transformed into what is best classified as a sleep away art camp — complete with scattered sleeping arrangements, wheat pastes hung up on the gallery walls ready to greet the outside world, in progress portraits of some of the participating artists by White Cocoa and a healthy buzz of street art-fueled conversations late into the night — the past couple of days and nights have blurred together leading up to the debut of the Living Walls project in Albany, officially launching this weekend. 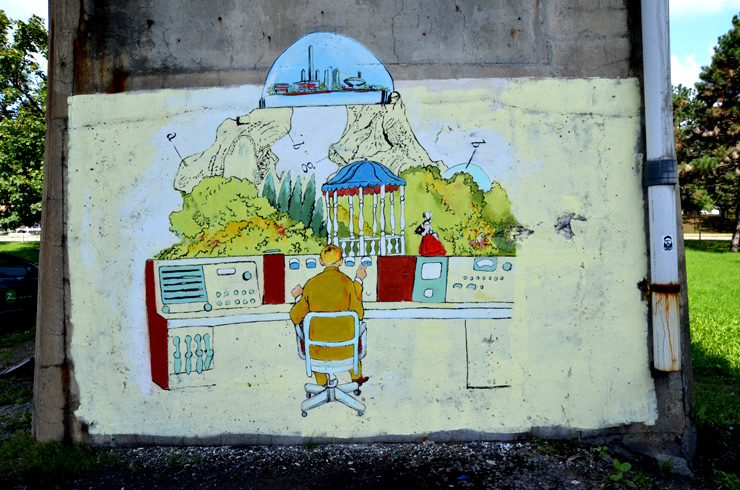 Away from the hustle and creation taking place both in the street, at the gallery and St. Joseph’s church, a conductor of sorts sits under a bridge in Rensselaer at the Art Park, overlooking Albany. The piece, as created by Clown Soldier, puts a figure in command of the happenings of the city from a detached control station. One can’t help but picture the happenings in Albany in relation to the Living Walls as beneath the futuristic bubble Clown Soldier created. The tag line that organically manifested surrounding the Living Walls in Albany — “This Is Happening In Your City” — is setting in. 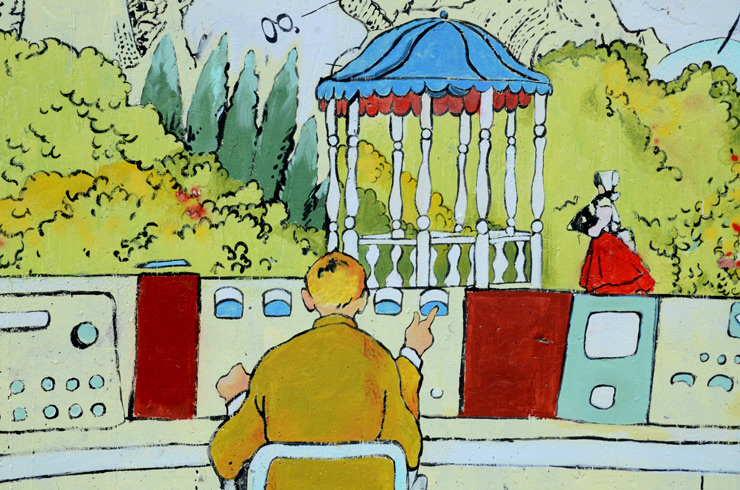 Kitty corner to the Clown Soldier piece is another Living Wall where Shin Shin and Wing collaborated under the massive support of the bridge in Rensselaer. The pair got to work using a bright palate environmentally fitting for the open industrial space, creating a natural and whimsical balance on the surface of the bridge’s support. 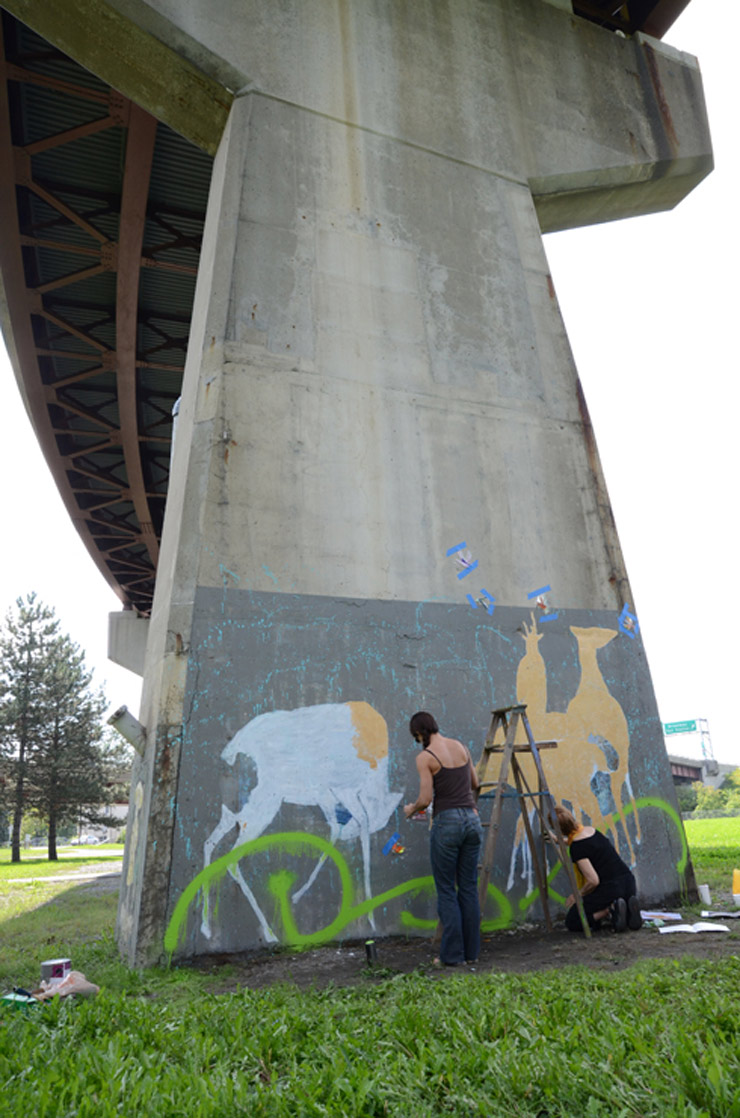 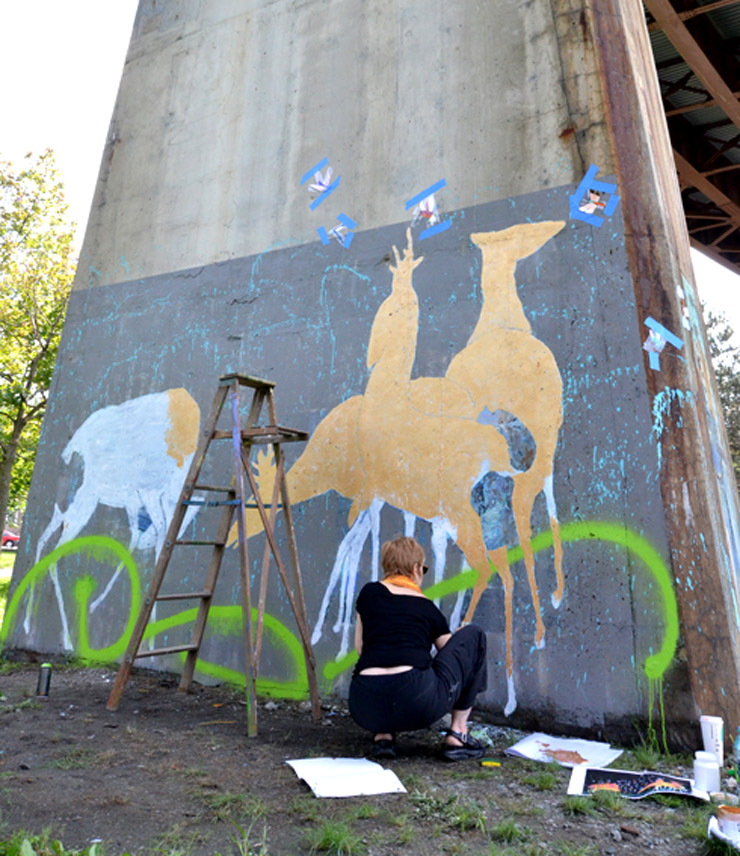 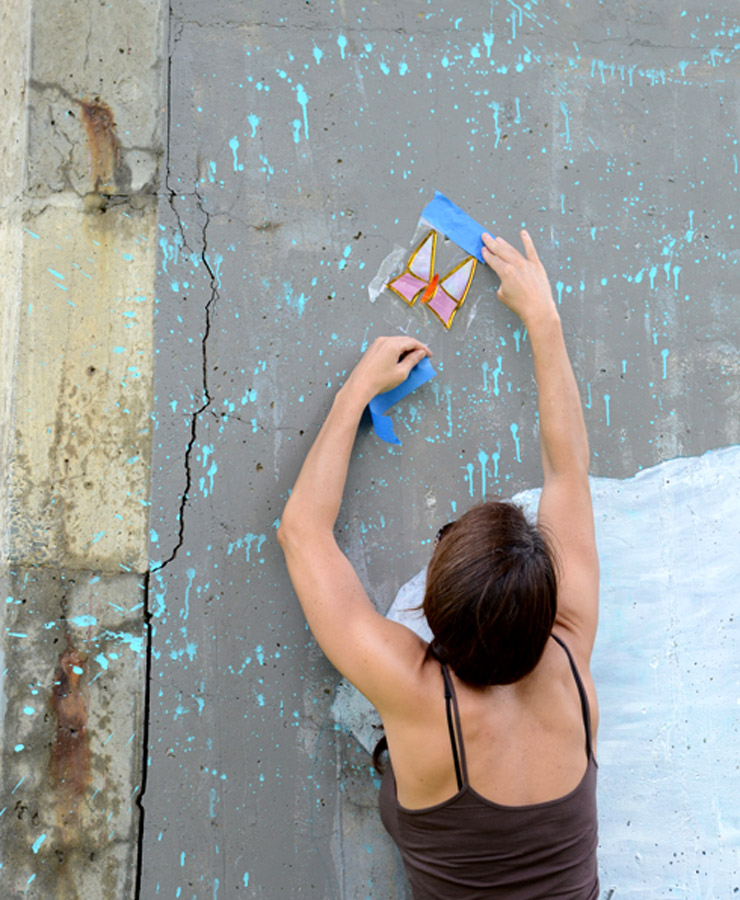 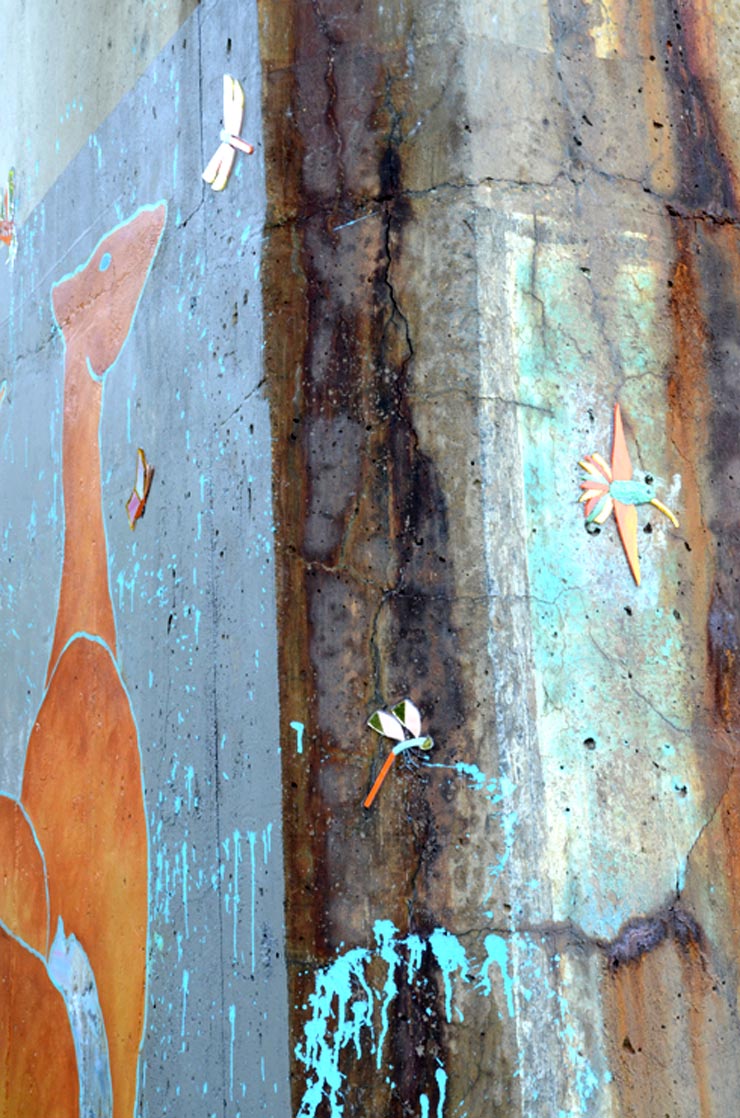 NohJColey, Depoe and N’DA also got down in Rensselaer, working over the course of several days on large-scale pieces, bordering existing (and aging) public murals, while also bouncing in between St. Joe’s church, where Living Walls installations are coming into form from a multitude of artists, local and beyond. 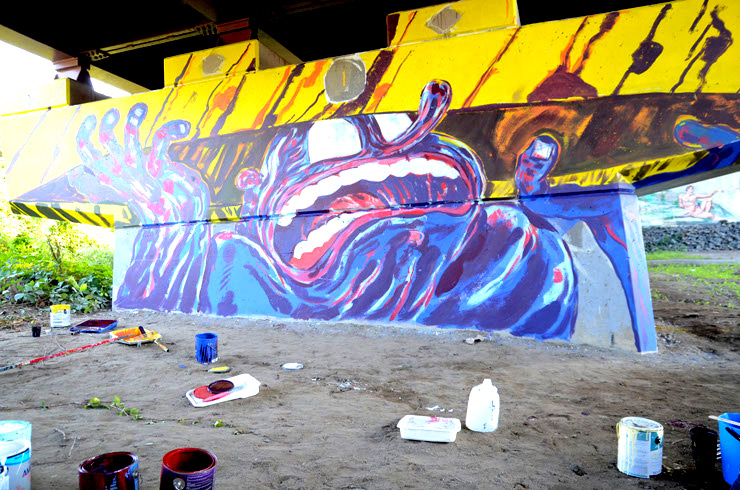 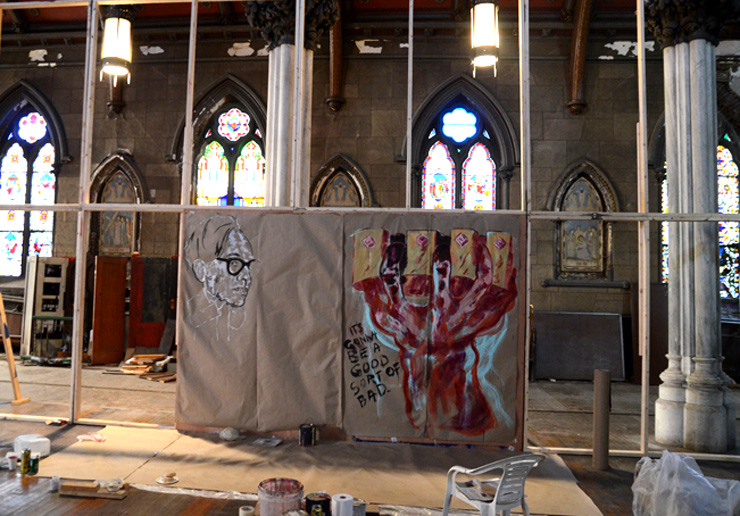 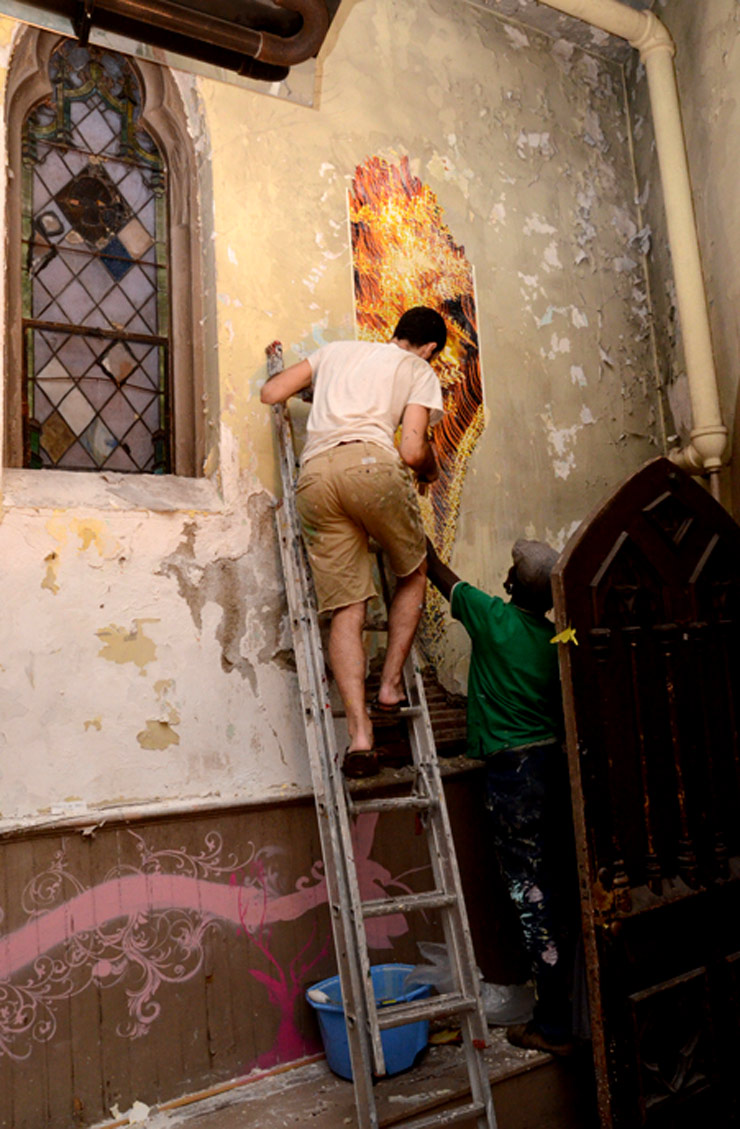 N’DA and NohJColey lend a hand to Shin Shin with the installation of one of her Golden Trees at St. Joe’s Church (photo © Bob Anderson) 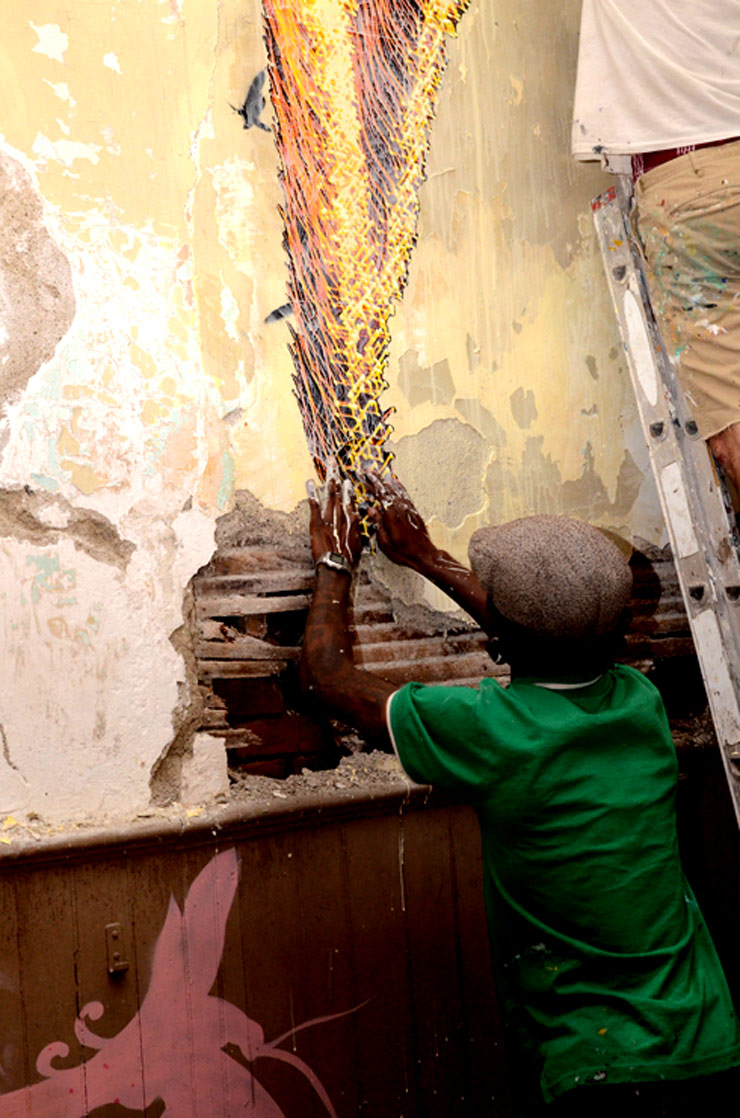 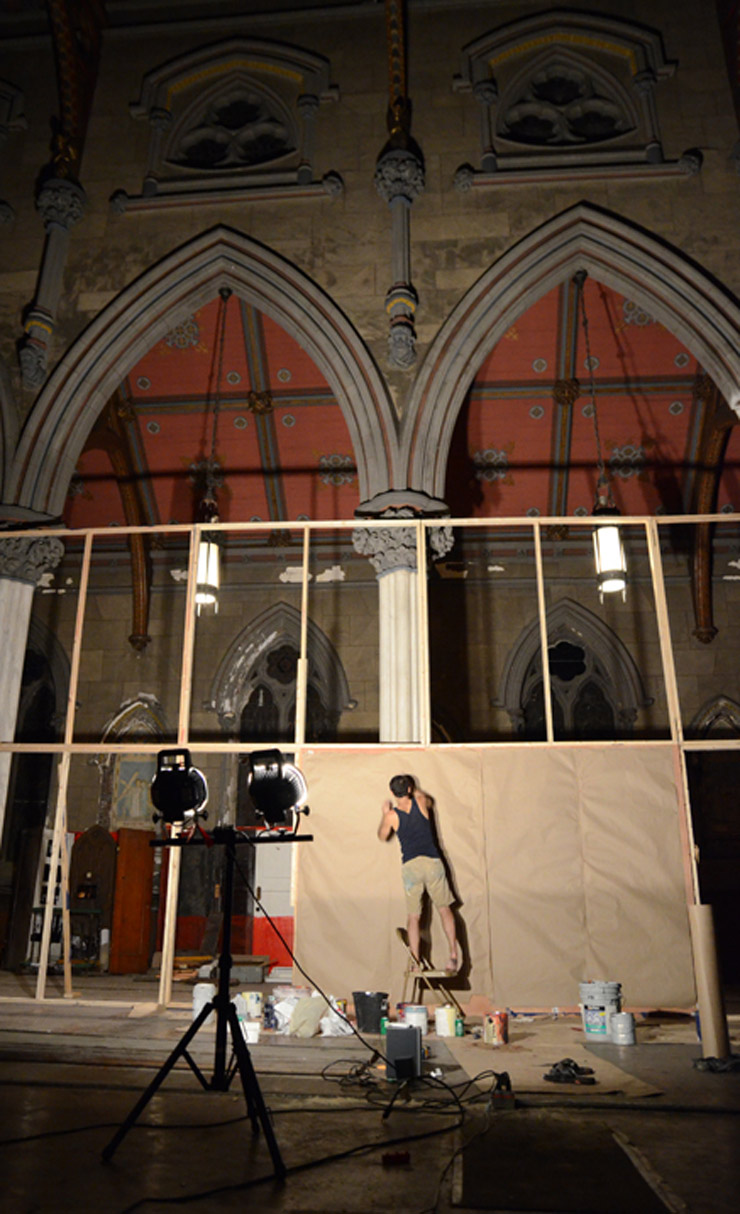 BSA Film Friday: 11.08.19
f Our weekly focus on the moving image and art in the streets. And other oddities. Now screening : 1. "AfroGrafiteiras" featuring Andrea Bak2. Magda Cwik / Hotel 128 / Street Art City in Franc...
Josh Katz is "Mighty Real" in San Francisco with Glamorous Sylvester Portrait
Straight from the Bay Area – bet you don’t hear that phrase often – here comes the legendary Sylvester! JKatz. "Sylvester". San Francisco, CA. (photo © JKatz) A Superstar of the disco era long ...
BSA Images Of The Week: 01.16.22
Welcome to BSA Images of the Week. This week we see the rubber band of our normal expectations is stretching and contracting in the city, whether you are referring to the insistant Omicron wav...
BSA Images Of The Week: 10.27.19
Welcome to BSA Images of the Week. The streets are alive! New York doesn't stop, even if your heart does when you are looking at the White House and the ongoing attack on institutions you bel...
Anthony Lister's "Rude Words" in Tokyo Streets and Gallery Land Him in The Slammer
AL: "Just spent 12 days in prison in Tokyo" BSA: Fuck! Was the food as good as the art? AL: Nope. The exhibition went great. The street stuff not so great. The food was terrible and was served ...
Albany NY Bob Anderson Brooklyn Street Art Clown Soldier Jaime Rojo KC Orcott Living Walls Albany ND'A NohJColey Shin Shin Steven P. Harrington Wing