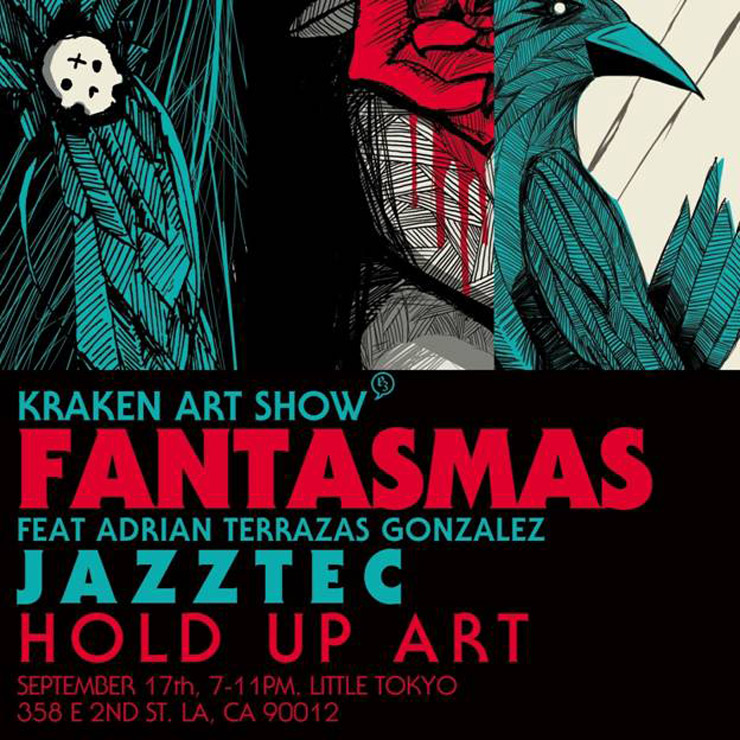 Fantasmas is the first solo exhibition by prolific Mexican street artist Kraken. Consisting of twenty-one pieces, ranging from giclee reproductions to handmade silkscreen prints and original drawings, Fantasmas showcases the unique style and voice of this talented artist. The exhibit’s opening reception will feature a live performance by Adrian Terrazas Gonzalez (The Mars Volta) with Jazztec.

Known for his dark, gothic and somewhat disturbing images, Kraken is a highly sought after commercial graphics artist in Mexico. His work has been used to brand products from alcoholic beverages to sneakers, from apparel lines to bands. As a member of Mexico’s E3 Collective, Kraken has been involved in numerous group shows around the world. His work has appeared in an Amnesty International art book to raise money for the cause in Darfur, and he has had his work featured in an installation by the Centro Cultural España. Kraken’s work is often recognized for his use of repetitive graphics and what could be called an obsession with eyes.

“I am inspired by different things when I work; comic books, movies, but mostly emotions. I get a lot of inspiration from reading psychological case studies of serial killers,” shares Kraken, “That’s where I got the idea of deforming humanity with unnatural light and dark colors, and repetitive imagery, like eyes. The eyes represent different things in my work, but lately they represent anxiety. I have this notion that your eyes see things differently when you’re having a panic attack; your stomach aches and your palms itch. It’s like those parts of your body are filled with eyes.”

For more information about this and other exhibits,

Martyn Reed: Art Saves Lives
The Founder of Nuart, Nordic Jewel of Street Art The small but very expensive (if you are not a resident) and oil rich Coastal town of Stavenger in Norway must be feeling a bit blue right now. Nuar...
BSA Film Friday: 04.22.22
Our weekly focus on the moving image and art in the streets. And other oddities. Now screening:1. Dyva & Haeck painting on the Molotow traTheo Jansen: Strandbeest2. AMERICAN DREAM. America...
Eelco "Virus" van der Berg in Bushwick
Dutch multidisciplinary street artist Eelco van den Berg (‘Virus) was in back in Brooklyn last week for a minute putting up a new wall with the Bushwick Collective - cat, fox, and bid in his distinc...
Dain and El Sol 25 on the Street in Berlin
When some of the artists were with us in Berlin for the BSA show "Persons of Interest" at Urban Nation, they also managed to hit up a few walls in the city. Not only did they plaster these in broad da...
ESCIF "La Pared Es Nuestra". Sant Feliu de Llobregat. Barcelona
When Street Artists and graffiti vandals are looking for a spot in public space they sometimes claim a wall as their own – even if someone else owns it. It’s a bit of hubris, but it helps with the str...
Brooklyn Street Art CA Hold Up Art Gallery Kraken Los Angeles