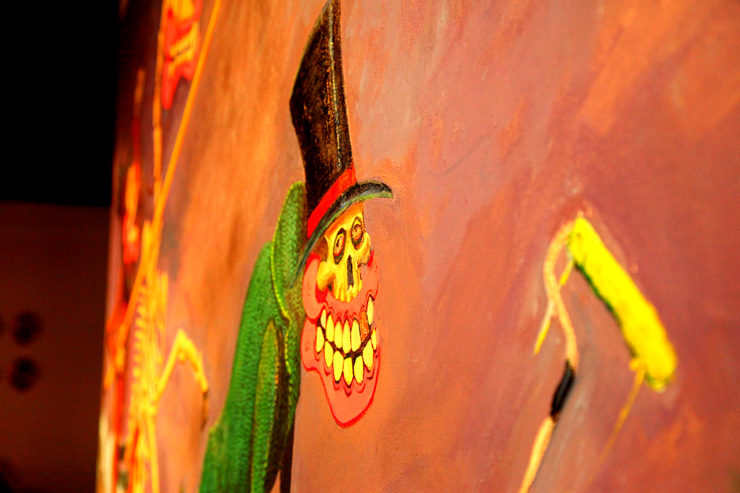 The London Street Artist Sweet Toof’s new show, “Dark Horse” at Factory Fresh opens wide to a mouthful of gleaming new pieces as the artist debuts his first New York show solo, having previously been a part of the Burning Candy Crew with Cyclops and Tek33.  A little frisky in the Brooklyn streets, we find that Sweet Toof is exploring more than the usual territory and challenging himself artistically, always with a healthy glob of humor.  Yes, the pink gums and pearly whites continue to have prominence in each piece, but their permutations progress at a dizzying pace. 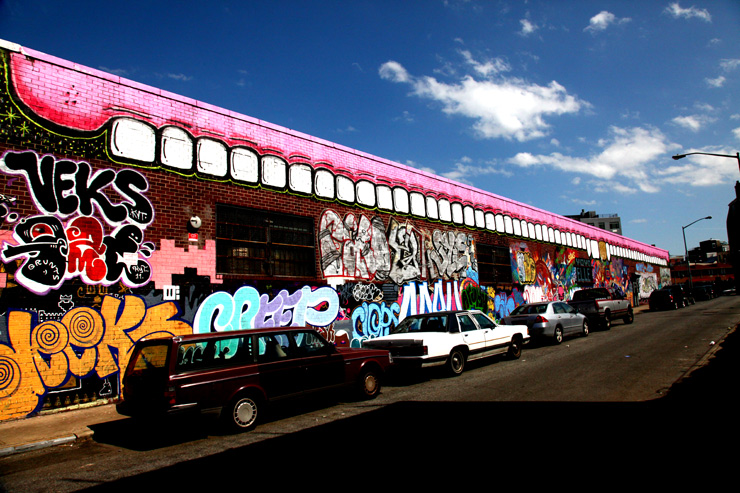 All along the gumline. Sweet Toof pimps the alley wall with some help from some friends from the hood. (photo © Jaime Rojo)

Sweet Toof has developed a recurring motif that perambulates through periods and platforms – aerosol mural, oil painting, or theatrical prop –  with a certain frank guile and handmade disarming charm. Some of the new tableaus of madly grinning top-hatted drivers atop skeletal stallions are pure Dickensian wonder with animated allusions to extreme social conditions and the play of comically repulsive characters. Others touch on graffiti vocabulary and pop/advertising culture with cheerfully mocking glee, the winking enthusiasm and poppy color trumping your worries that it isn’t making any sense. All tolled, it’s a bit of a romp and a promise of tasty treats to come – and if you arrive early you’ll receive your own set of gold sweet teef atop a popsickle stick.

On the day we visited the gallery the place was a divine chaos of paint and construction materials, with works-in-progress laying on the floor waiting to be completed or hung. The partially lit space proved a helpful foil for the spooky pimped-out characters on the canvasses – the sort you wouldn’t trust with a bottle of milk. 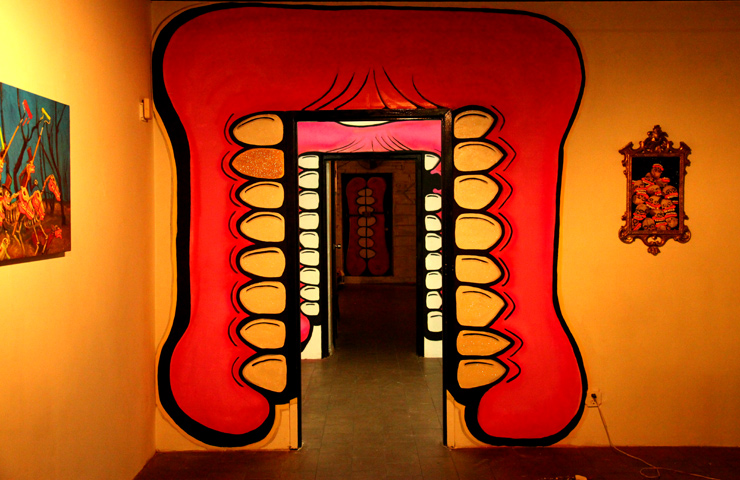 Sweet Toof . Come in. We are open. It is sweet inside. (photo © Jaime Rojo)

The Factory Fresh shopkeeper Mr. DeVille, looking very trim and sunny, murmured something about the current artist-in-residence being on a roof somewhere and after further inquiry, Mr. Toof appeared promptly with a warm and genial demeanor. After a brief tour we took to the street to watch him work. He told us a bit about his work and the upcoming show, after starting with the topic of weather of course.

Brooklyn Street Art: How has your experience been so far in Brooklyn?
Sweet Toof: I have really enjoyed it. The rain some days and then sun. But I can’t complain. I have just been eyeing out all these spots but yeah it has been really good. The weather has been very unpredictable but today is a beautiful day and I love Brooklyn. 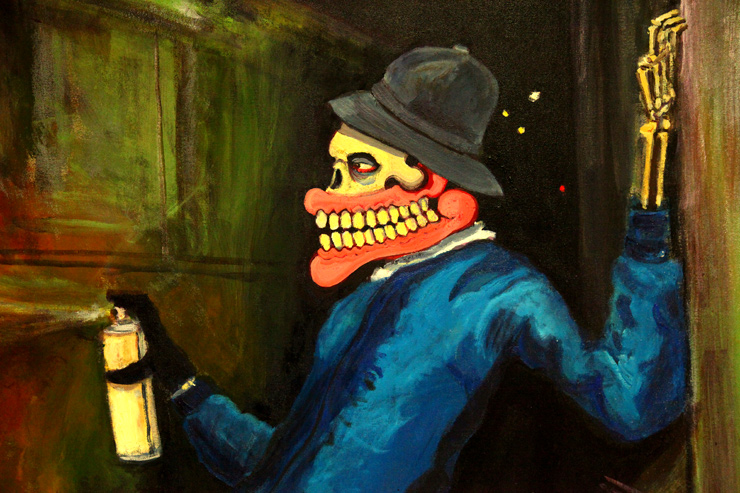 Brooklyn Street Art: Is there a difference between working in Brooklyn and working in London?
Sweet Toof: There is a little difference. I mean it’s quiet interesting. This is Bushwick and in London, in East London there is an area called Hackney Wick. That’s an area where a lot of people have been painting but they are cleaning it up now because of the Olympic buff – It is almost like a sister of Bushwick because of all the lofts spaces in warehouses and factories where people now live. So it is a similar type of vibe but I like the character here and the architecture. 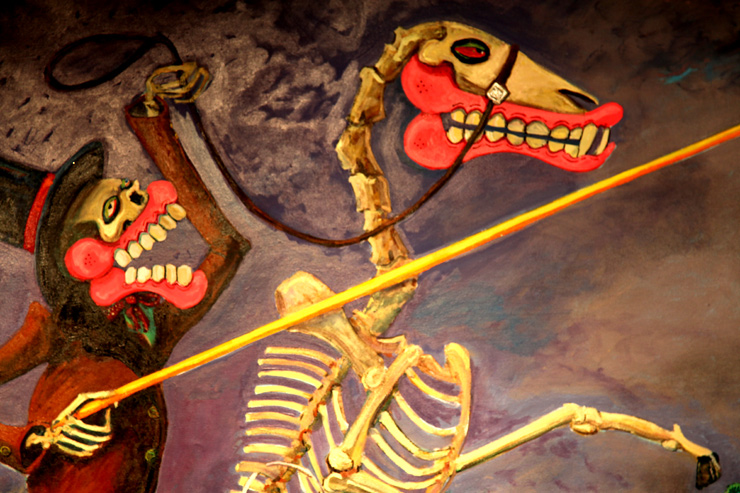 Brooklyn Street Art: And the people?
Sweet Toof: Yeah I forgot the people…my experience with the people so far is that everyone is really friendly and it is almost like everyone seems to be willing to help and in London none really says hello but here people would say hello…you’re engaged. Brooklyn is more engaging even when you go to the shop and you have been there for a couple of times people recognize you and they start talking and so it feels quite like a community. 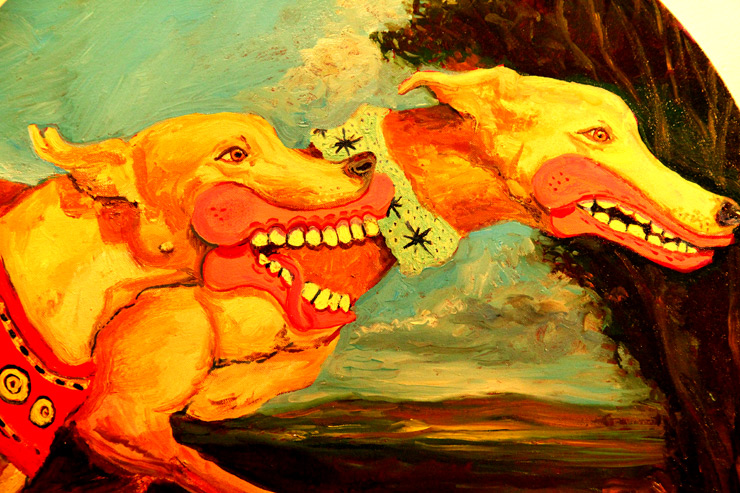 Brooklyn Street Art: Tell us about the use of gold dust in your work. Have you always used it?
Sweet Toof: Yeah I have used it before on paintings. I’ve used gold pigment, I’ve been using quite a bit of glitter and gold dust just to give it a little bit of extra “bling”. I like that whole sparkly thing, the way the light hits it and it gives it just like another layer in a way. But I just like to mix things up. Even pearlescent paint and I like all sort of paint; oil paint, bucket paint, spray paint – I love it all. But the pearlescent glitter is just like another element within that. You know I think teeth are like jewelry anyway but just with that extra bling, you know when you see people’s teeth and are like pearls. 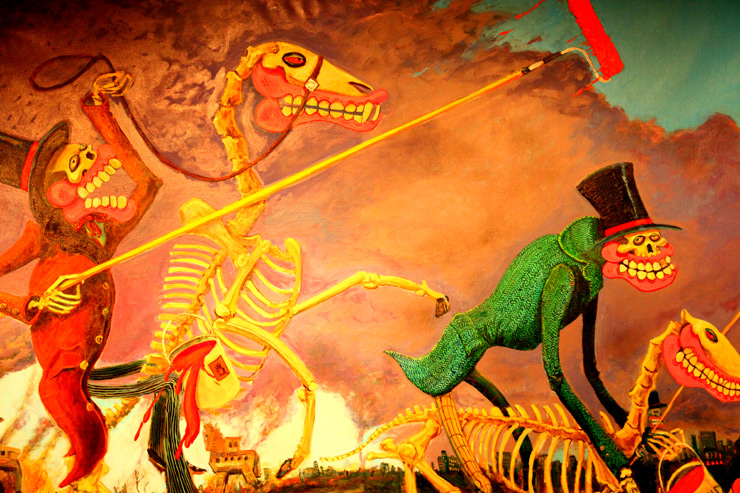 Brooklyn Street Art: Have you been to the south of Mexico and seen the Day of the Dead festival?
Sweet Toof: No but I’m intending to go to Mexico quite soon. I’m fascinated with the Day of the Dead and all of that stuff. It is almost like it has been with me since art school. Since I came across the old woodcuts and the imagery of Guadalupe Posada. The thing I like in Mexico, unlike in England, is that they celebrate death and in early age you are given these candy sweets and they eat it. It’s almost like you enjoy your days and you sleep when you are dead in a way. But death is not just doom and gloom. 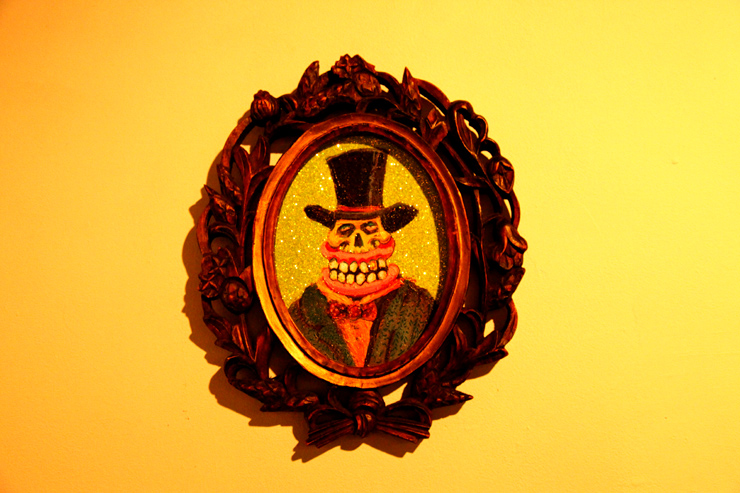 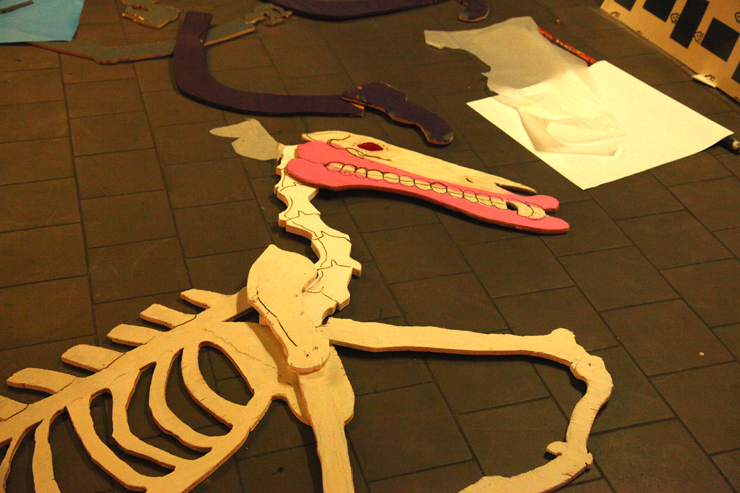 Brooklyn Street Art: Tell us about your sense of color. Where do you get your inspiration for bright colors?
Sweet Toof: England is very gray. I mean you do see color but I just sort of respond to the environment that I’m in but I love color anyway. When painting out on the streets I used to like the spontaneous part of it about not seeing your colors when you are painting in the dark. You’ve got a rough idea about what the colors are or you have written the colors on the can or you can see the tones in the dark, but then when you are in the studio and you are mixing your colors it’s almost like you have that whole understanding of color – and it’s the same in print making. You might look at the sky and you think “how I’m going to get that intensity?”  It is about looking at the contrast with all the different hues and understanding color, which I think, comes from oil painting a lot but also from mixing colors for the stuff on the streets as well so you understand how the colors work. 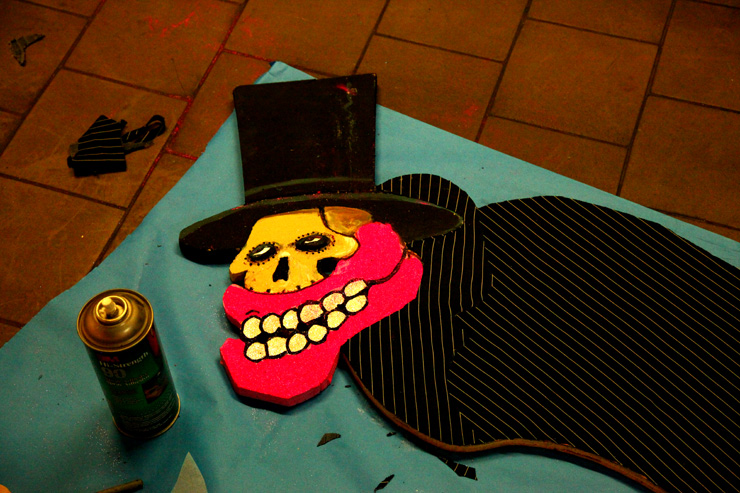 Brooklyn Street Art: Would you like to talk a bit about you not being part of Burning Candy or is that a sore subject?
Sweet Toof: No, not really. I left last September on my own decision but I really wouldn’t want to go into the politics of it. I just got to the time where I had to get on with my own stuff. I wish them all the best and I wouldn’t want to bitch. I want to keep it simple and getting my head down.

Brooklyn Street Art: What would you like to happen on Friday at the gallery for your show?
Sweet Toof: I’d like for everyone to have a good time and enjoy. Bring people together and just let people mind their own minds about it. It’s one of those things where you never know how people would react to stuff but I want people to enjoy. 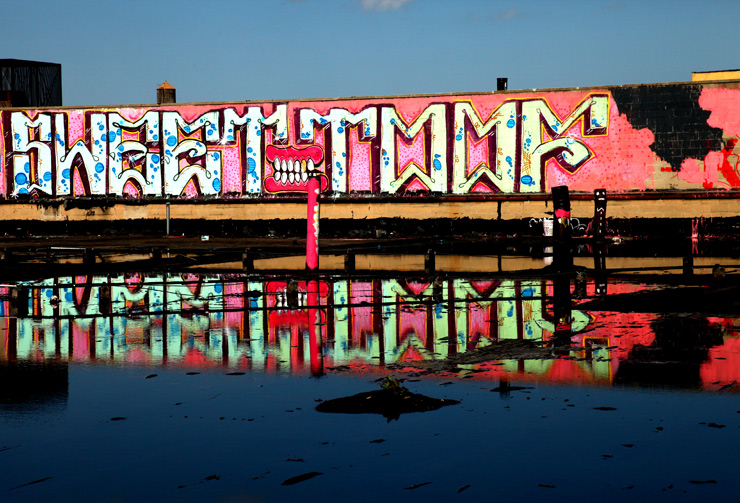 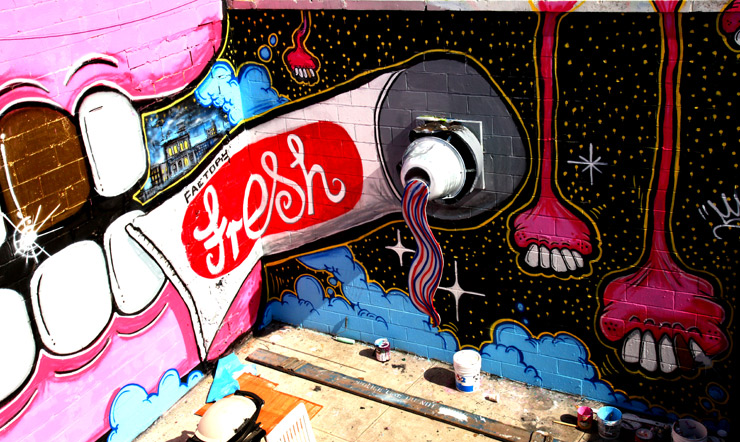 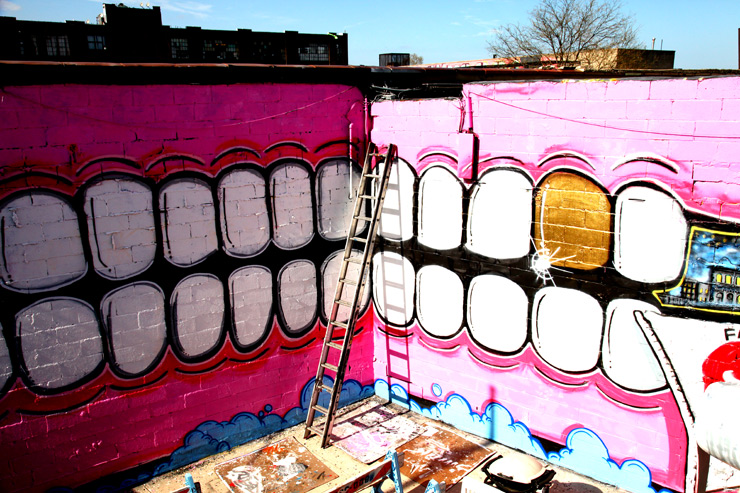 Dude is so tall you need a ladder to floss. Sweet Toof at Factory Fresh. (photo © Jaime Rojo) 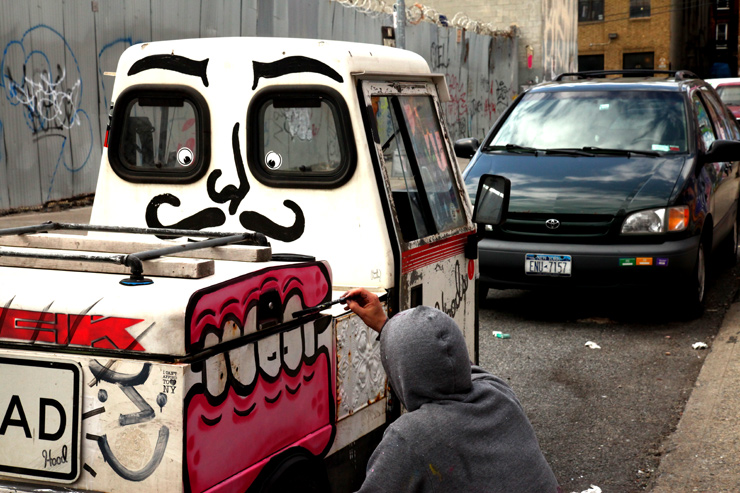 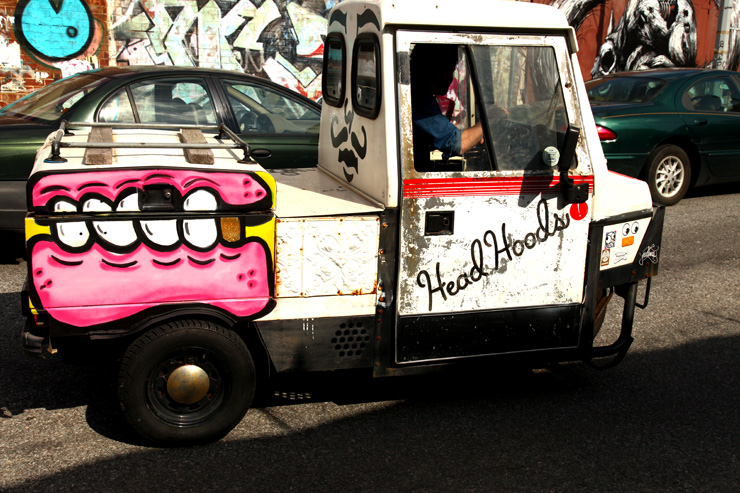 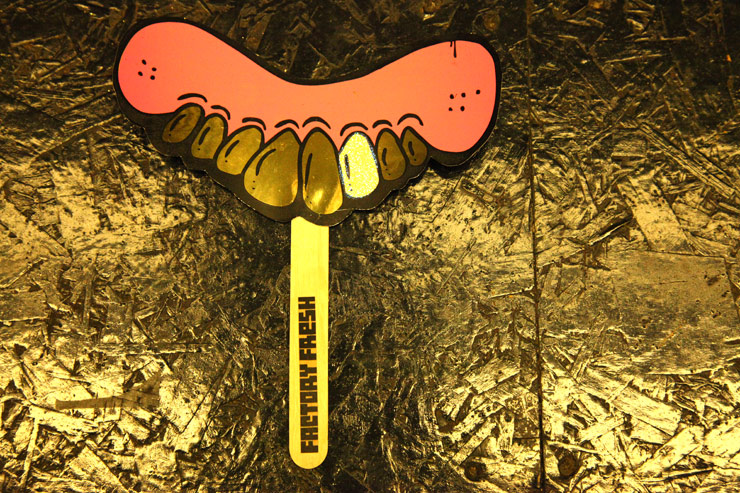 Opening April 29th, 7-10pm at Factory Fresh
On view till May 22nd, Gallery is open Wednesday – Sunday from 1-7pm

BSA Images Of The Week: 09.09.18 / Monumenta Leipzig Special
It's great to be back in New York! Welcome to BSA Images of the Week. Shana Tova to all our Jewish friends and the best to you in the new year! Congratulations to all our Indian friends for...
"AVATAR" of Ourselves by Karl Addison and Jarus in Atlanta
How much of you is here with me right now? Are you giving me 100% of you? 80%? 15? When we are texting and "liking" and "sharing" and posting we prefer to think that we are interacting with the world ...
BSA Film Friday: 01.24.20
Our weekly focus on the moving image and art in the streets. And other oddities. Now screening : 1. "Gestures of Caring" Jan Vormann2. Drones Printing Walls, Stop Us if You've Heard This One....
Greetings From Berlin - Soaring Walls from HowNosm, London Police Borondo, Van Der Sluijs, Super A
Traveling around Berlin this weekend we took a couple of trains and an unexpectedly looooong walk into the neighborhood of Tegel in search of Urban Nation's huge One Wall installations that we haven't...
Lucy Sparrow Opens an All-Felt Bodega in NYC : "8 ‘Till Late"
“Let’s see…Champagne Moet and Campari are selling well, Vagisil we’re very low on. Brooklyn Lager we’ve had to re-stock,” Store Manager Jo Brooks ticks off the hot sales of the day here in Manhattan’s...
Brooklyn Brooklyn Street Art Factory Fresh Gallery Jaime Rojo NYC Steven P. Harrington Sweet Toof