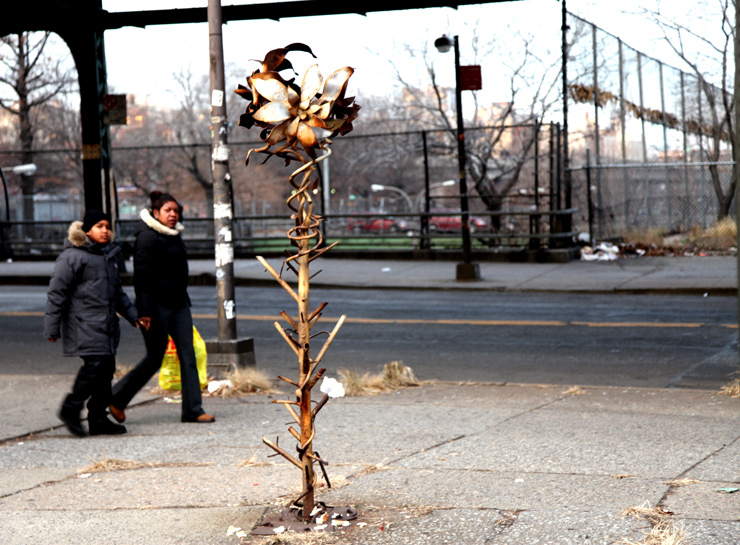 ‘A Decade Of Public Art’ is Leon Reid IV’s first New York City solo exhibition and features a new public sculpture viewable outside Pandemic Gallery. The show reveals a vast range of unpublished material associated with his well known public artworks. Sketches, maquettes and video footage flesh out works such as “True Yank” the controversial Abraham Lincoln intervention; “Free As A Bird,” a sculpture installed on a prison guard tower; and “The Kiss,” the cherished London installation for which he is most known.  Reid provides a glimpse into his plans for future public works, including his monumental “A Spider Lurks In Brooklyn” project, which recently received Fiscal Sponsorship from New York Foundation For The Arts (NYFA).

Listed as one of the “60 Innovators Shaping Our Creative Future” by Thames & Hudson, Leon Reid IV has been on the edge of public art for over 15 years. He grew up as a traditional graffiti writer (a.k.a VERBS) and quickly developed a knack for unconventional practices such as painting street signs and installing them during daylight disguised as a construction worker. His most famous work of this period is “Verbs St – Oh Yes I Did” a cleverly manipulated subway sign installed in Canal Street station, NYC. His experiments in graffiti lead him to move beyond the genre and pursue site-specific installations under the pen-name Darius Jones. The New York Times featured an article on “It’s All Right”, a subtle contortion of a One-Way sign and a Phone sign creating the illusion that the two are in love. Reid is one of the few artists responsible for introducing sculpture into the language of street-art, his techniques of installation combined with his humorous and romantic themes have made a sizable impact on urban artists of his generation.

Reid’s current work remains sculptural, highly contextualized and is often installed on existing architecture. In Norway, “The Great Recession” features a giant Kilroy-Was-Here styled sculpture hanging over the ledge of a local bank, apparently holding on to his last dollar.  In Brazil, “Bring The House Down” depicts a life-sized human figure made of chain, attempting to uproot the building pillar of a cultural institution. Reid’s latest works add striking visual elements to existing structures, the result of which he considers a true collaboration with the structure’s architect.

At present and through out his career, Leon Reid IV has designed his work to communicate directly with the public at large. He considers every site -be it domestic or international- an opportunity to create work that is meaningful and accessible to the community where it exists.

Leon Reid IV’s work has been exhibited worldwide and featured in publications/media such as: Time Magazine, The New York Times, PBS, BBC, Radio National Australia, Good Magazine, Creative Review, Recharge and The Wooster Collective among others. He co-authored a novel based on his experience in graffiti and street-art “The Adventures Of Darius and Downey” as told to Ed Zipco” Thames & Hudson 2008. Reid holds a B.F.A. from Pratt Institute in Brooklyn, NY, and an M.A. from Central Saint Martins School Of Art and Design in London. He lives and works in Brooklyn, NY.

"Monument-Of-Many" Installation at Monumenta Leipzig
An unusual exhibition that combines works from the established to the newcomer, Monumenta was mounted by a team of about 25 people in only five weeks inside this cavernous former metalworks ...
Women Rock Wynwood Walls at Miami Art Basel 2013
An international team of heavy hitting women in Street Art are the centerpiece of the Wynwood District this weekend as Jeffrey Deitch returns to Miami to co-curate Women on the Walls. Reprising a more...
Bifido: "Love Will Tear Us Apart" in Mostar, Bosnia Herzogovina
I am inhabited by a cry.Nightly it flaps outLooking, with its hooks, for something to love.Sylvia Plath Street poet and street artist Bifido doesn’t mean to be morose, but here in Mostar he can’t ...
DAZE: "Daily Commute", Solo in NYC
Most people commute to and from work. Some spend hours caught in rush hour traffic, trapped in their cars. Others use their bikes or skateboards or a bobbing, roaring ferry. Some lucky ones just walk....
Unusual Art Installations in Toulouse Refugee Camp: "Creve Hivernale II"
“Over the period of two months all the artists intervened on the site illegally and wanted to live in the same conditions as the refugee families,” says artist and journalist Sandra Butterfly as she e...
Brooklyn Brooklyn Street Art Jaime Rojo Leon Reid IV NYC Pandemic Gallery