Amazing new work has been appearing around New York by Street Artist Overunder for about a year and a half. An illustrator, painter, and text writer – the styles are quite varied and intermixed and the themes are often symbolic, fantastic, and blurred. One recent piece, a large scale realistic collaboration with a street artist named No Touching Ground, is a memo-pad tattooed arm with a short list to accomplish, finished with a cluster of rollup gates. While the wall was permissioned, the rain was not and it complicated matters for the two artists. In fact, weather is always a component in the work of the street.

When describing the new piece, Overunder explains how one must plan for a works degradation when it is created for the street:

“So pre-production consisted of picking out bits and pieces from my sketchbook followed by an impromptu photo shoot of my arm and tattoo. But the real genesis of the piece was admitting it’s faults. Like saying no matter how good the work is it’s still going to chip, still going to tear, and rip, and fade. It’s going to do everything that we’ve become accustomed to when choosing to work outdoors. So the spin was how can we use deterioration to our benefit? 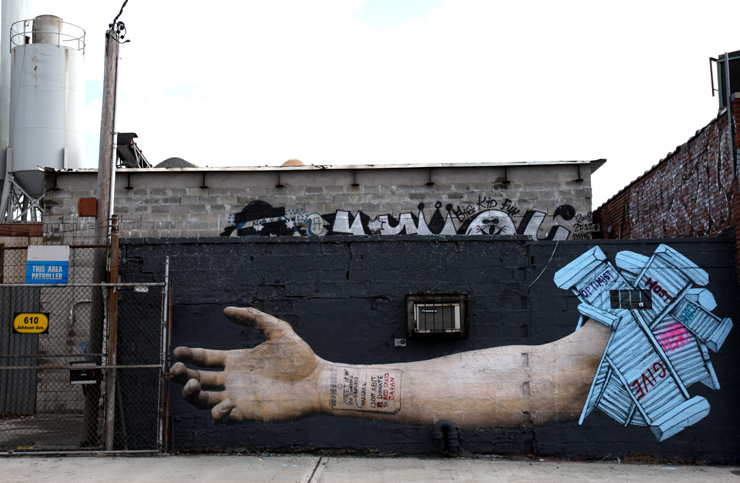 “Helping Hand’ is our hypothesis to what I would call a “slow” painting. Painting, as I’ve always understood, is based on getting to that point when you say, “it’s done, it’s a masterpiece.”  The slow painting anticipates elements of change and works subtractively. So when it starts it’s finished, and then you create layers on top to allow that finale to be postponed.

It was a list of things to do that I wrote on my real hand and then sprayed on this larger-than-life hand. I added a new note on the list: DONATE TO RED CROSS JAPAN. I then left one note undone: PAY RENT. I hoped this subtle prioritizing would get people to question how much they really could help.”

Image of the original hand model from Overunders’ blog. (© Overunder)

“Lastly I worked on the gates and the names. The longer I’m in NY, the more I’ve become infatuated with roll-up gates and use them in my work, either for imagery or as canvas. The gates are stacked against one another like they are in the city but further abstracted. I then took names of writers; Optimist, Cope, Heart, Give, Host – to be read by writers or non-writers to get two different yet similar perspectives. “ 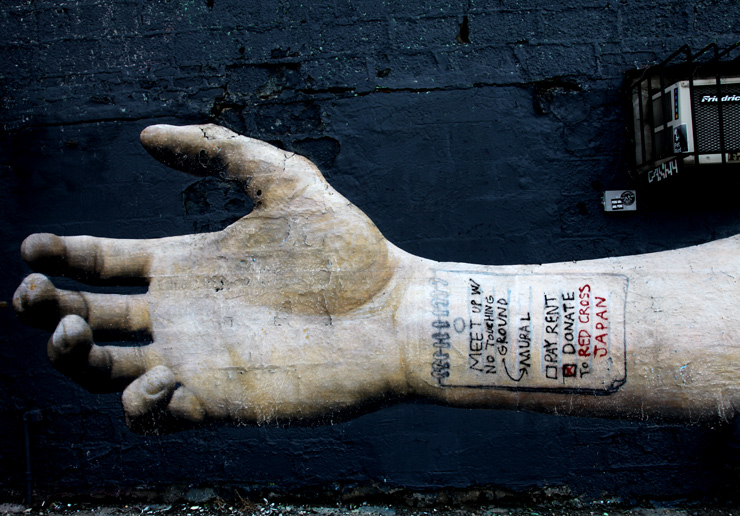 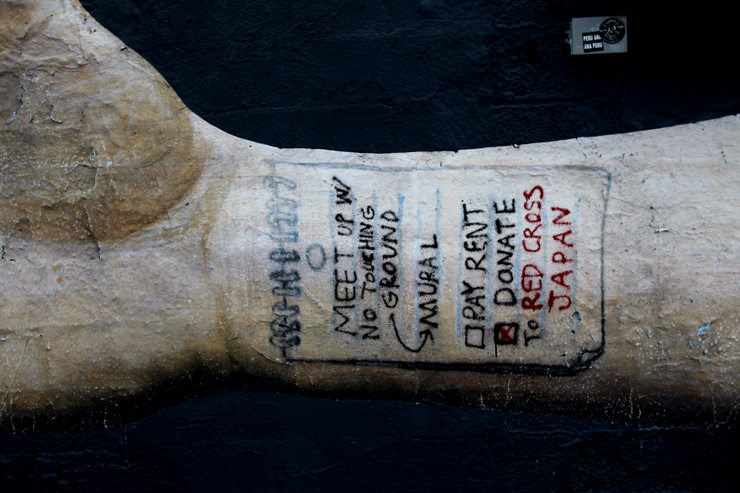 Following are images of other pieces recently done by Overunder and ND’A. 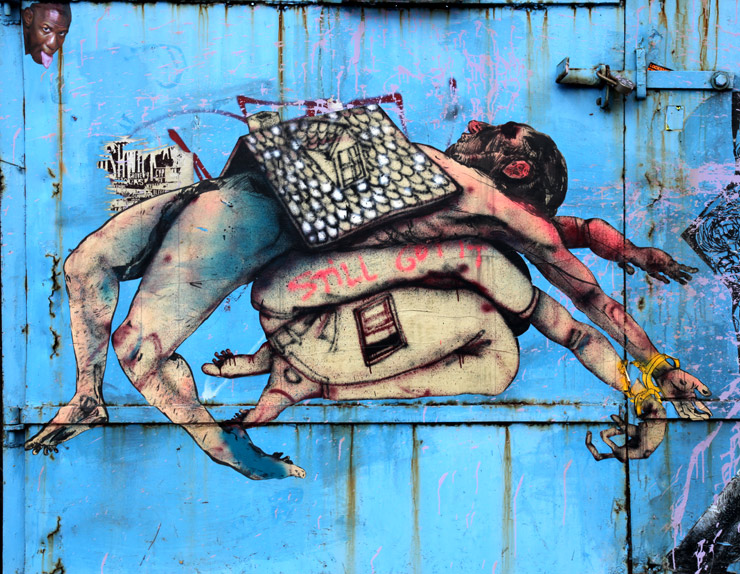 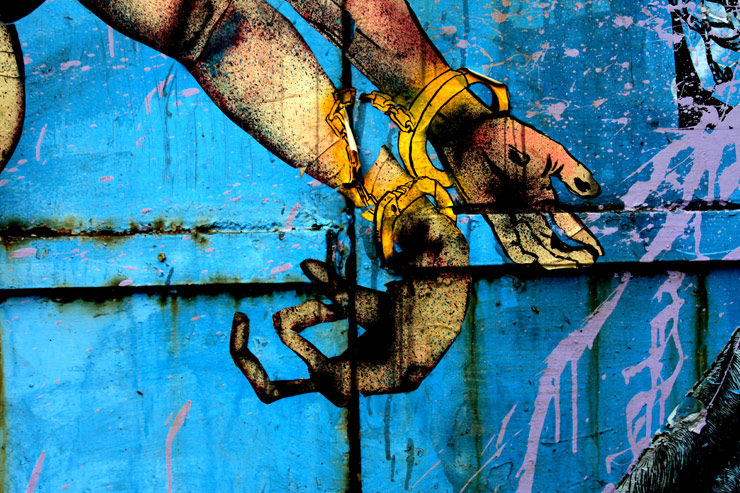 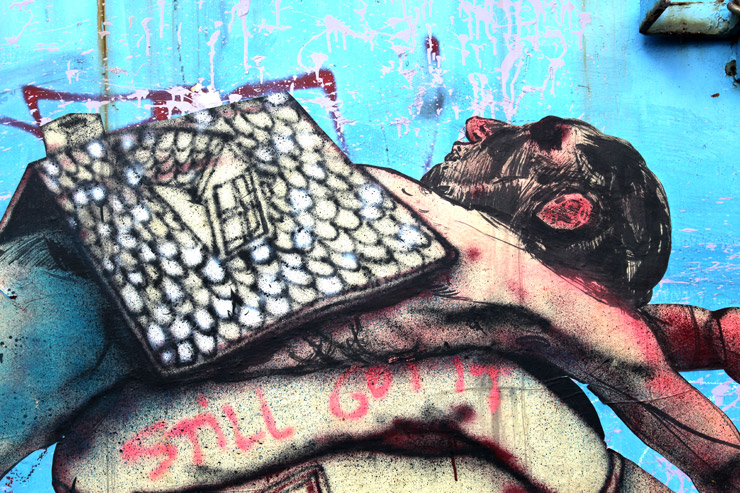 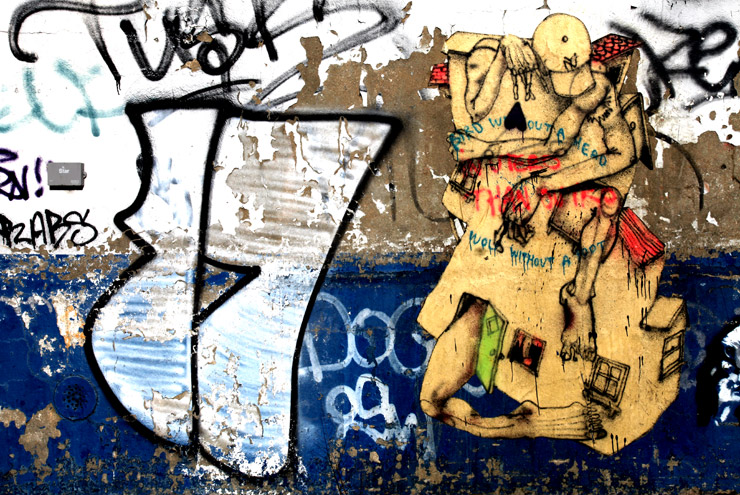 "Street Art In Sicilia" Tours You Through 31 Cities and 200 Artists
"Street Art In Sicilia" Tours You Through 31 Cities and 200 Artists
BSA Images Of The Week: 10.27.19
Welcome to BSA Images of the Week. The streets are alive! New York doesn't stop, even if your heart does when you are looking at the White House and the ongoing attack on institutions you bel...
"Équilibres Précaires" (Precarious Balances) in Paris with Clément Laurentin
Speaking in his abstractly modern visual language, artist Clément Laurentin creates this curvilinear winter ode to our permanent state of precariousness. In cooperation with Art Azoï, an important st...
Golden Rivers from Gola Hundun Mark Landslides in Stigliano, Italy
A Land Art Installation Dedicated to the Dichotomous Power of Water. Here in Stigliano, Italy, the area and the people have been seriously impacted, often in negative ways, by several landslides o...
The Transgendered Self as Muse: Julien de Casabianca and His New Outing
“Grand Mozeur Feukeur.” French Street Artist Julien de Casabianca is debuting a new series of photographs that may appear as a surprising departure from his previous multi-year multi-city OUTI...
Brooklyn Brooklyn Street Art Jaime Rojo No Touching Ground NYC OverUnder Steven P. Harrington