All the World is a Circus! Says I. 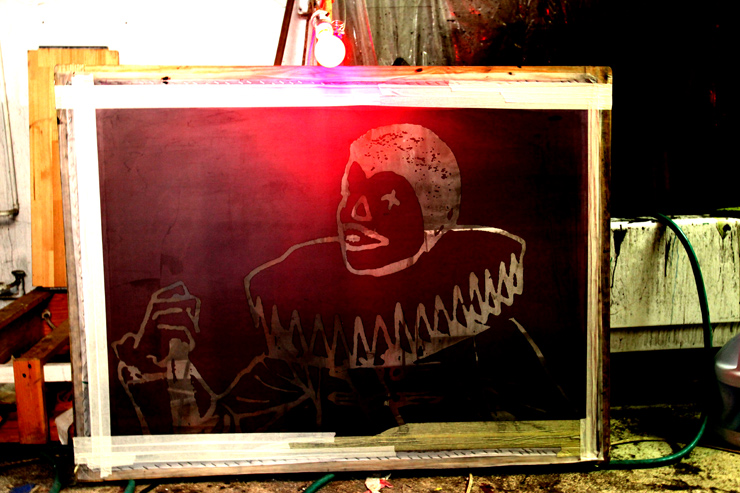 Winter sun floods the old factory stable, crowded with tall boards, small canvasses, art and history books stacked on handmade shelves, multiple screens leaning 5 deep against a light table.  An oblong work table with flat files underneath holds myriad constellations of actual clip art arranged and stuck together in endless combinations on rolled paper. For the first public interview with the Clown Soldier you’ll have to gingerly squeeze yourself into the unkempt low-fi cyborg factory, lest you knock something off a nail.  Once you are in, the merrymaking is evident, and so is the well studied industry behind the images. 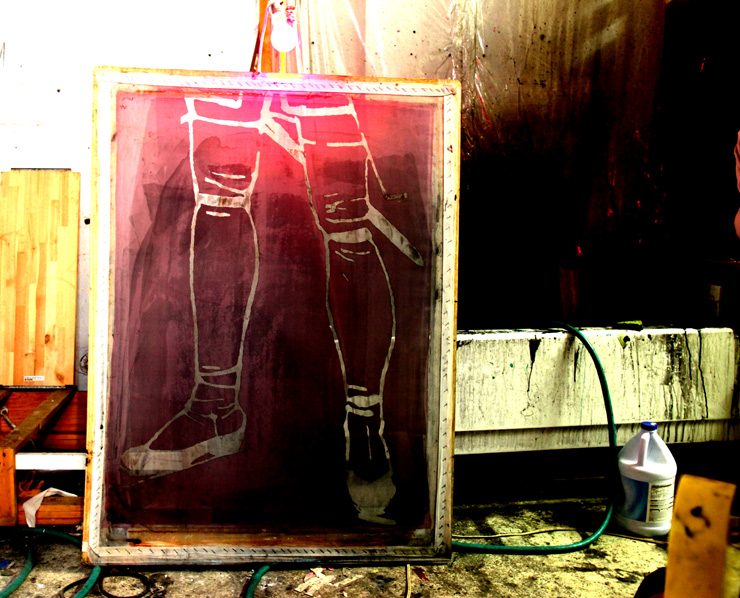 Since Clown Soldier first appeared, people have wondered what the hell it is, and what it means. The incongruity of a military jester in cool poppy color standing 8 feet tall amidst a field of detritus on walls across the city has mystified a number of Street Art watchers. Behind each image is 15 years of fine art, academic study, fascination with chance and experimentation. The collage process is not haphazard, but it is part divination. In the end, the work of Clown Soldier it is about the absurdity of the world and engaging the spirit of play and discovery.

(Ed Note: For people in town to see the art fairs – the most recent piece by Clown Soldier can be viewed right now at the Fountain Art Fair on West 26th Street floating on the Hudson River.)

Brooklyn Street Art: Do you think that people realize what goes into making your work for the street?
Clown Soldier: No I think that when they see it they think that it’s a computer printout. They probably think that I scanned in the image, blew it up to 8 feet and printed it out in two seconds at Kinkos.  And they might say, “Where is the art in that? Where is the skill?” 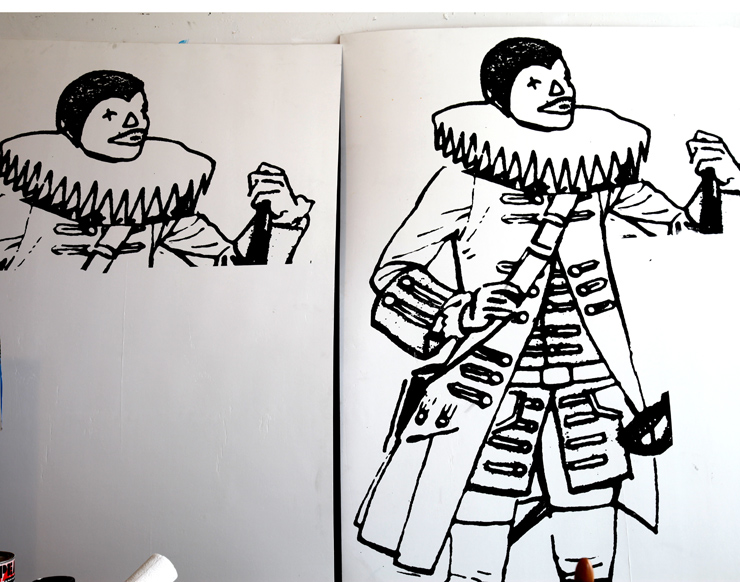 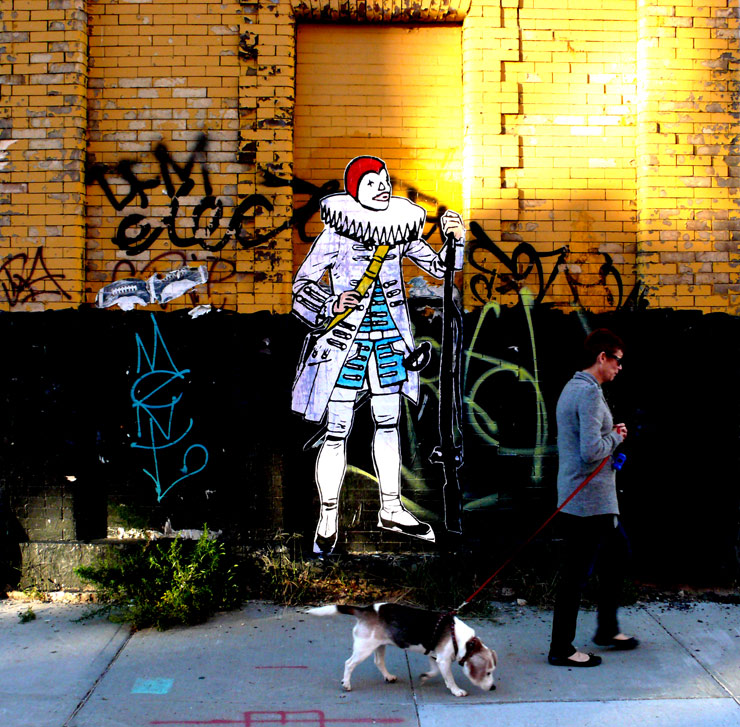 Brooklyn Street Art: So what do you do, how do you make these, what is the process?
Clown Soldier: I start with collage. I cut up thousands and thousands of pieces of imagery until something works. What’s great about collage is you come with things that you wouldn’t come up with if you were drawing.  So you cut up all these fragments, you know – it’s inspired by (William) Burroughs and it goes back to Picasso right? Anyway that process, you cut up these things and you put them together and not in a million years I would put these things together or come up with… so when I find this gem, this absurd thing.

There was a photographer who’s name I can’t remember right now who said that they felt like they were Richard Dreyfus in “Close Encounters of the Third Kind”  –  He’s got “Devils Mountain” in his mind.  And he’s making Devil’s Mountain with his mashed potatoes his family thinks he’s crazy. And he’s ripping apart his house and he takes everything including the garbage and makes this Devil’ Mountain in his living room. It’s like he knows something – he’s like “this is something” – he’s channeling something…… And that’s what I feel like when I’m cutting up the stuff. I’m channeling something. Something is there and I’m going after it. And I’m not exactly sure what it is. 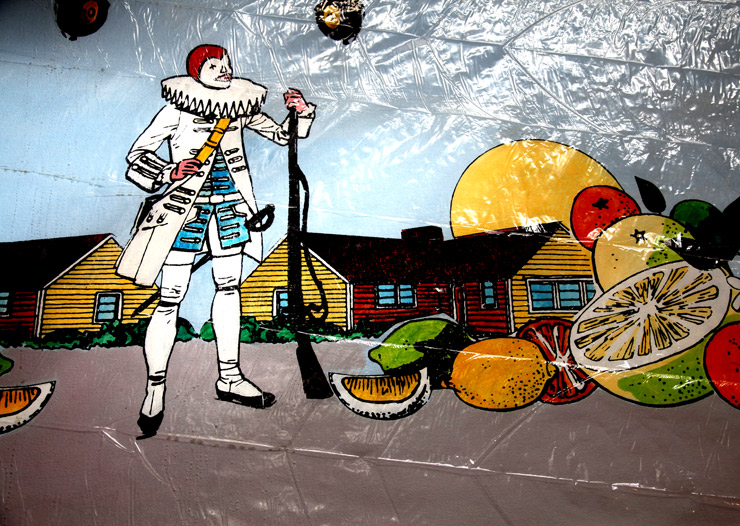 Brooklyn Street Art: How would you characterize that something? Is it the creative spirit? Electicity.
Clown Soldier: I don’t know. It’s beyond anything I can comprehend. I mean I’m cutting up things and something happens and you can’t believe you created this thing and it didn’t exist a minute ago. These two objects that you put together and it didn’t seem like it worked yet and you are making a realization.  I was originally inspired by (Max) Ernst and the idea of automatism.  So you get at the subconscious. So I’m getting at my ideas and it doesn’t look contrived. I really don’t like work that is contrived and as a painter I worked that way and I worked through color and form and I like when it just evolves naturally. 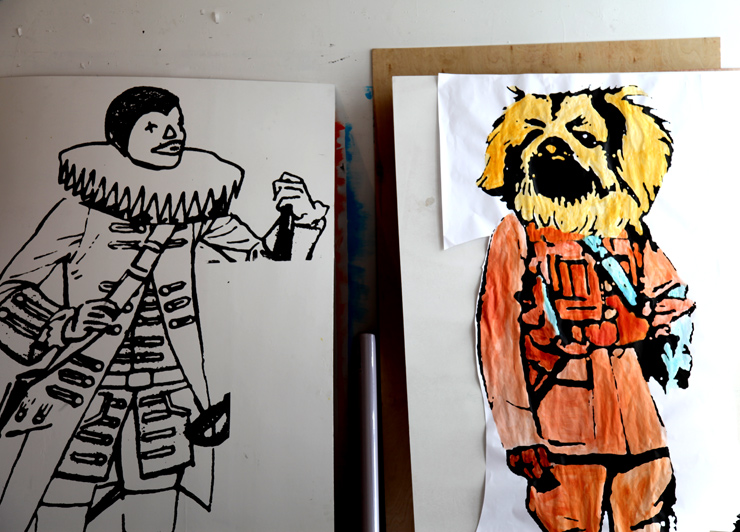 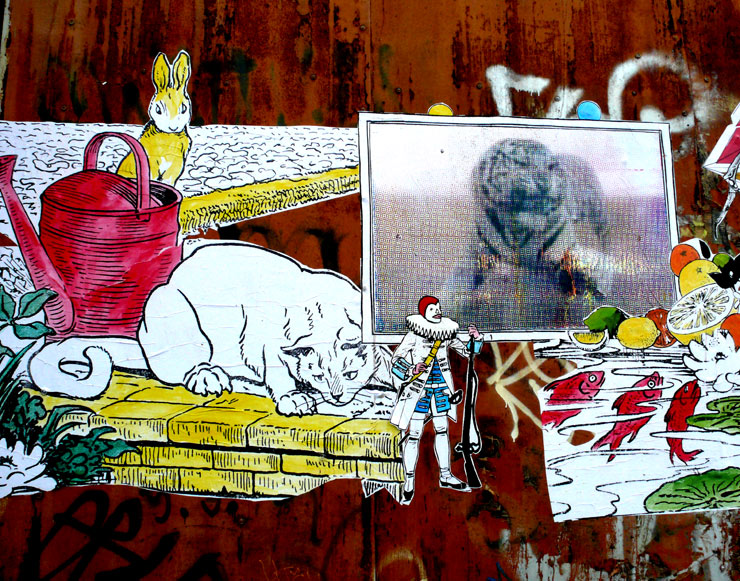 Brooklyn Street Art: You mentioned Burroughs and I think of him and I wonder, did he just accept the outcome of the process or did he select his favorite outcome?
Clown Soldier: That’s a good question, I mean he and Brion Gysin were working a lot with chance. I mean I think in a way they were very similar to the Da-Da-ists in the 1910s but I think that they were trying to push it much farther.  I don’t think they were selecting their preferred outcome, and I think that would be a difference between me and Burroughs process because I am only taking the cream of the crop from what I make and then it becomes really powerful to me.

But also there is a consistent absurdity to me of all the work. There’s a sense of humor. I feel like there is a whimsical quality and my sense of humor comes across.  But it’s the same strangeness, same absurdity. Writing is not my strength, and I can’t nail down exactly what it is saying.  It’s beyond that, beyond words for me.  Maybe if I actually found out what this about maybe it would not be interesting for me or for other people. 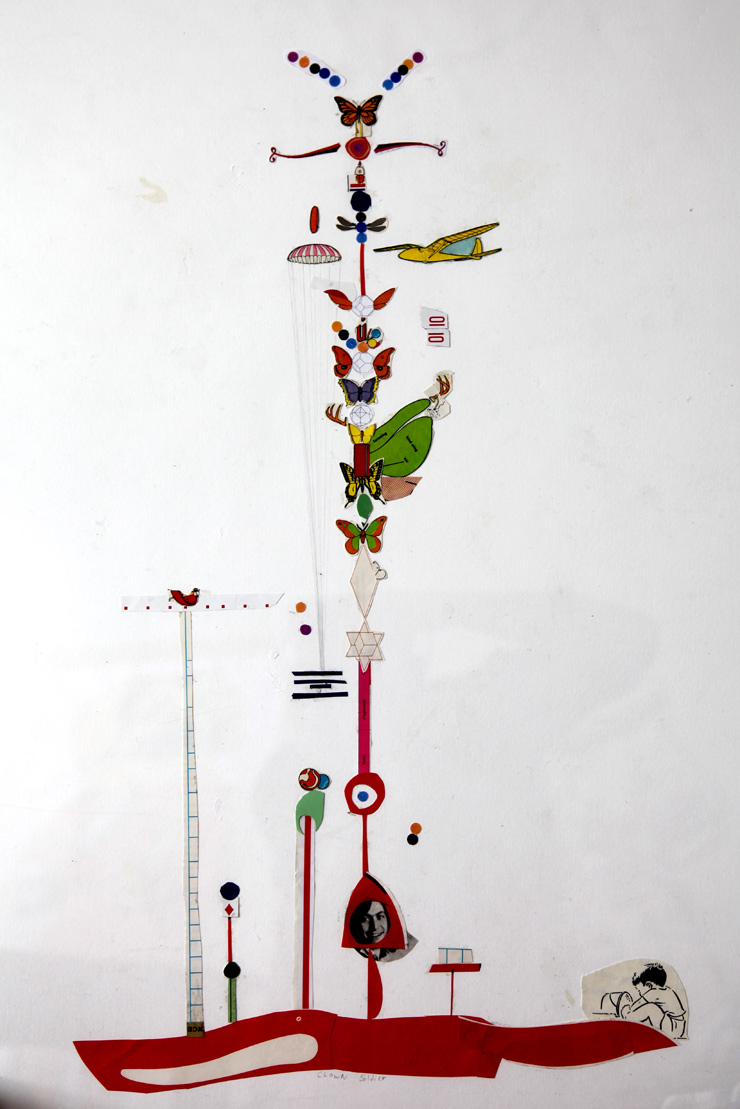 Brooklyn Street Art: Can you describe, for someone who hasn’t done it before, how do you make a screenprint.
Clown Soldier: That’s cool, that’s a good question. Basically you start with making a film, a positive transparency, a photocopy on a transparency for example.  The way the screen printing process works is you have different meshes of screens, and it can go from 80 mesh to 300 mesh for example. So 80 mesh is not that tight a weave,  and the higher you go, the tighter you go and the smaller the squares formed by the weave.  It’s like thread counts, or in Photoshop you have different resolutions, or dpi. Same thing with screen printing.

Then you take silk that is stretched on your frame and you coat it with a photo-sensitive emulsion and put it on a light table with the film you made. Wherever the light goes through and hits the emulsion, it hardens. The light doesn’t go through where the black is, so the emulsion stays soft and it washes out with a water hose. So that’s it.

Brooklyn Street Art: So each Clown Soldier is made of three screens?
Clown Soldier: It’s like 7 screens for each one! I mean, the thing is, it takes me a whole day to make a clown soldier. People don’t realize that. I have to print the head and then dry it with a hair dryer and then print the next section because they’re tiled together and then I paint it – the skull cap, the lips, the blue of the suit, and the yellow belt. Then I cut it out. So, yeah, the whole process takes a day. And people look at it for 2 seconds. I think they can tell it’s hand rendered.  There’s a lot of time and effort put into it. 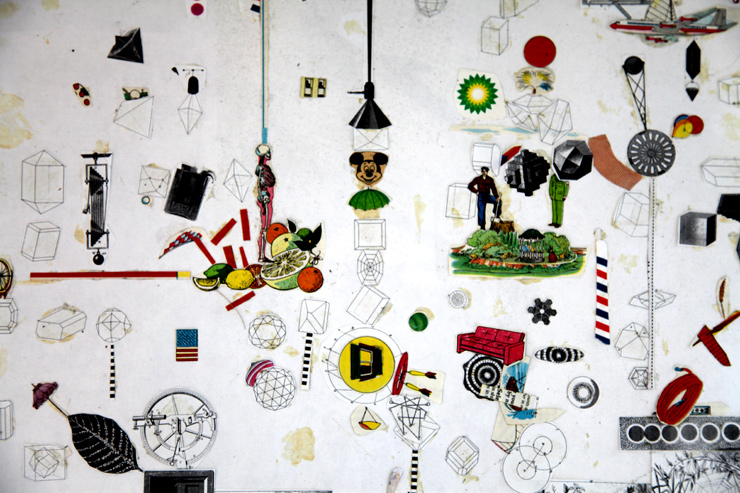 Brooklyn Street Art: You know what people would want to know the most – What is the significance of the Clown Soldier? The name? The image that goes with it?
Clown Soldier: I’ve been thinking a lot about that. Originally I liked it because I was watching this movie “Bomb It” and there were a bunch of Street Artists who were talking about being soldiers of the street. Not that I compare myself to people who jump into trains or over fences and risk their lives in that way. But I feel like every time you go out on the street you put yourself at risk so you are sort of soldier. In no way do I want to compare myself to a real soldier and I highly respect real soldiers. I really thought of it like; The incongruity of it was interesting to me – just having the two names combined – clown and soldier – is an oxymoron.  But about the clown portion; I want to know when did clowns get a bad rap? It’s like everybody thinks clowns are scary. I tell people my tag and they say, “Clowns are scary”.  I mean, in no way do I think that that clown is scary. I mean when Picasso did it everybody loved it.

Brooklyn Street Art: I think a harlequin is this sort of foppish character from a royal court, maybe from the Renaissance.
Clown Soldier: Oh, maybe he’s more like a harlequin. I was thinking about myself more like a clown. I definitely connect with this image of a clown soldier.  For me it had no political connotation – I certainly respect soldiers and I don’t want to give the wrong idea about that.

Brooklyn Street Art: It’s about the absurdity of the pairing.
Clown Soldier: Yeah, the absurdity! It’s obviously such an innocent image, I think. It’s also interesting that he has a Dutch ruffle, a French Revolution uniform, and a clown head. It’s three different cultures and time periods. 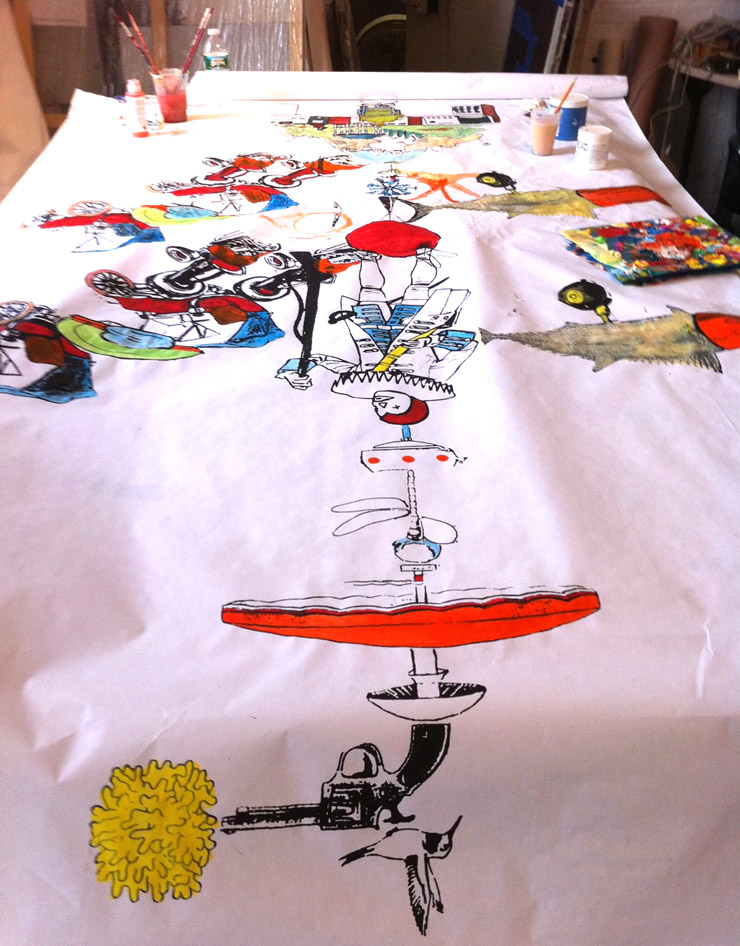 Brooklyn Street Art: It’s like someone got lost in a costume shop, trying on different things.
Clown Soldier: Right, that’s what it is like for me. I’m trying different things, combinations, having fun. I think life is a circus.  Like this Fountain Fair is a circus.

Brooklyn Street Art: So what has your experience been like at the fair so far? What are you going to do while you are there?
Clown Soldier: Well, I’ve been looking at a lot of circus imagery and I think that is a direction I’m going to be going in. I’m going to try to create a piece that looks kind of like those banners you see going into a circus.  Like those banners that advertise ‘freaks’ – a culmination of things you’d see on the way into the circus.  I want to make it look very circus like.

Brooklyn Street Art: I always think of what Fountain does as a kind of punk circus.
Clown Soldier: It is. It’s avant-garde. I love what John and David do. I think that they are incredible guys because they put so much into it and it’s amazing what they are able to achieve in such a short amount of time.  They take this boat, canvas it with a tent, which is a huge feat, put walls all around it and get all these different galleries, set it up, and then throw this incredible party. You know? I mean they get a lot of help from their friends but basically they do it themselves and I’m like, “How do they do this?”  and it winds up being a success. 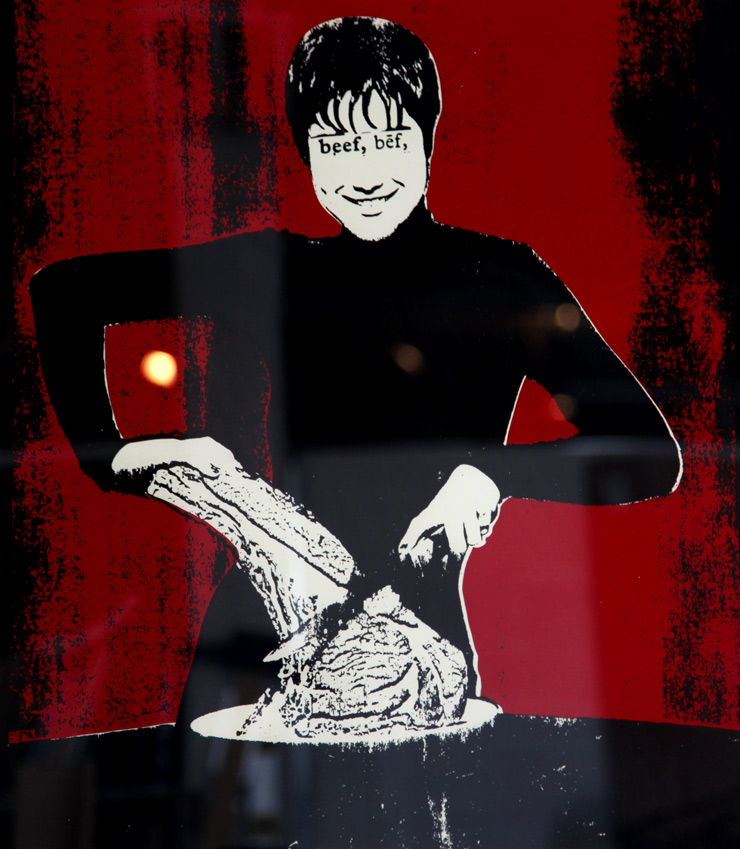 Clown Soldier’s work will be on display at Fountain Art Fair in New York City. To read more about Fountain click on the link below: